What Flavor Is Your Owlbear?

We recently made pot roast from Heroes' Feast, but when applying the same recipe to a fantasy world it begs the question: does it have to come from a cow? 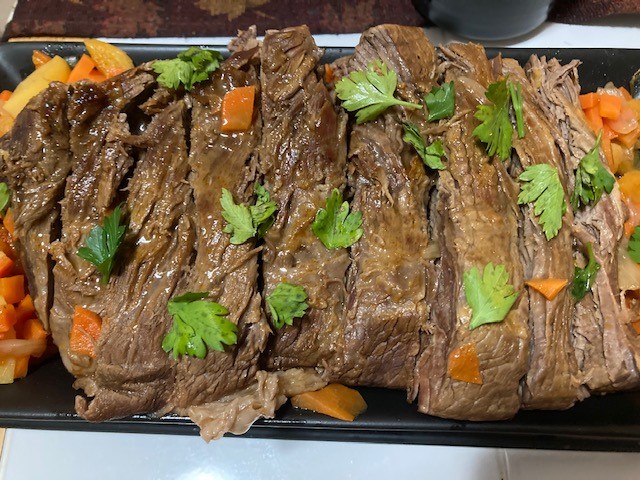 The pot roast recipe in the Heroes' Feast cookbook makes a very simple but important concession to translate the meal to the real world. It's made of beef, not venison:

To endure the arduous cold of Icewind Dale, the Reghed and other similar groups such as the Uthgardt of Northern Faerun, must maximize time and energy to thrive. Communal meals at winter camps (constructed seasonally to survive the exceptionally long winter) are as central to their dignified warrior culture as their deep religious traditions. Venison (the meant of antelope, deer, or elk) is the most readily available, and thus coveted, finding various uses for these resourceful nomads, but beef or rothe is completely acceptable in other realms.
Click to expand...

Like some of the other meals in Heroes' Feast, this one takes time. It's a pot roast after all! Most of the work involves the gravy (Heroes' Feast really loves its gravy recipes). There's plenty of leftover gravy and a lot of vegetables. In fact, it took me an entire week to eat the leftovers.

This recipe required white wine, but we ended up using a light beer because we didn't have any handy. I also accidentally diced the carrots instead of chopping them int 3/4-inch pieces; that's what I get for not reading the directions closely!

The big difference in this recipe from your basic pot roast is the apricots, which lend it a delicious flavor. I'm not accustomed to having fruit in meat dishes, but it's a tasty addition. My daughter enjoyed it and even ate leftovers.

I'm not sure how much this meal has to do with the Reghed northerners however (somehow, apricots don't seem like something they use, despite statements that "Reghed stake proud claim" on the ceremonial pot roast dish to mark the beginning of the long winter). But what does seem likely is that any culture that lives in harsh conditions would eat whatever creature provided sufficient protein, and that leads us to the question of eating monsters. 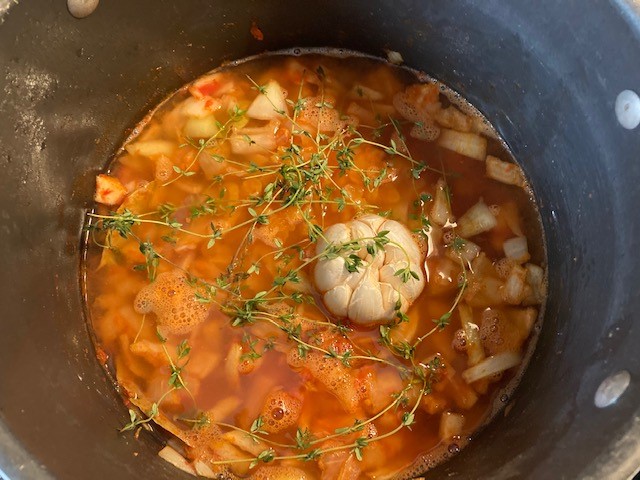 If It Bleeds, We Can Eat It​

What makes it okay to eat a creature? The topic of what we define as food, pets, or pests is controversial in the modern world. For an in-depth discussion of the topic, see Some We Love, Some What Hate, Some We Eat: Why It's So Hard to Think Straight About Animals. Defining what's an edible being gets even more complicated in a fantasy world. Broadly, you could easily rule that food animals must be beasts. Certain other creature types make it clear where they stand in the natural order.

Celestials, fey, fiends, giants, humanoids, and undead imply a certain level of intelligence that would probably be more defined as cannibalism than a food animal. Some might be unsuitable depending on their makeup. Elementals have their own unique problems with consumption (you could drink a water elemental, for example, but good luck eating a fire elemental unless you're Natsu from Fairy Tale).

We already know there are abyssal chickens, so despite the broad caveat that eating a fiend might be a bad idea, there's some planar dwellers who surely don't hesitate to chow down if they can catch them. Conversely, unicorns and pegasi are celestials in Fifth Edition, and they have a legacy of being hunted for their body parts if not their meat.

Oozes are a weird case. Theoretically, they might be edible raw, or they might simply dissolve into an (inedible) puddle of goo.

Eating a dragon involves a host of problems, not the least of which that dragons aren't okay with it. But dragon meat could easily be a delicacy, if a reprehensible choice for PCs who see sentience as a hard line not to be crossed when choosing their meat.

We can't let the vegetarians off the hook either. There are plant monsters in D&D, some sentient. Depending on the reason a PC doesn't eat meat, plant monsters raise a thorny (ahem) question as to ethics of consuming it.

But then there's the unique cases, like aberrations (which can be terrestrial but alien creatures), and monstrosities (which can be just about any other monster). So what might you eat that's not a typical beast? 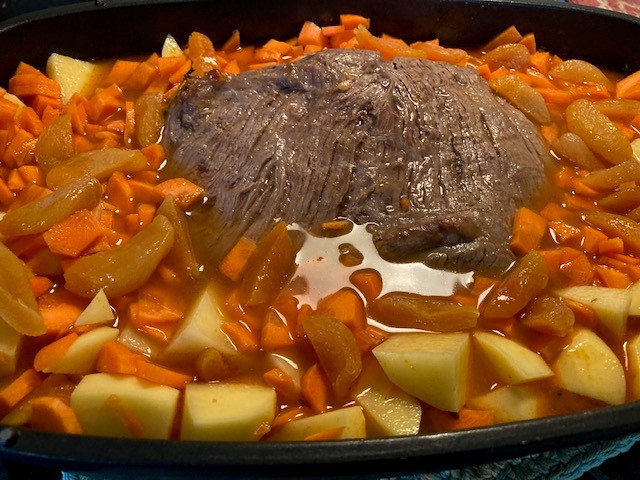 There are plenty of creatures that are beast-adjacent, like the owlbear. Of the aberrations, chuuls seem like large crustaceans and might just be edible (and tasty, with the right sauces). Ankhegs fit in a similar category, given their bug-like appearance.

Other monstrosities are not so easy to classify as a meal. Historical sources might be a guide. Basilisks and cockatrices in medieval bestiaries were affiliated with snakes and chickens, so they might be edible or poisonous depending on the source. Hydras seem lizard-like, but again have been associated with poison in historical sources so eating them might not be a good idea.

Other creatures probably taste what they look like. Gricks and purple worms seem like worms and probably taste about as appetizing. Gorgon's look like cattle but are covered in scales; their meat might be delicious or terrible given their petrifying breath.

And then there's the really weird creatures like the bulette, darkmantle, roper, and rust monster. What they taste like is anybody's guess; since they're all predators, they're probably not eaten very often. Can you even eat a rust monster roast with metal utensils?

If the Reghed barbarians can make a pot roast out of venison or beef, then surely other cultures pick and choose their meals based on the edible creatures they can catch. It's up to the PCs if they should try it ... and up to the DM to determine what they taste like.

Your Turn: What happened when the PCs tried to eat a monster?
Click to expand...

Mike "Talien" Tresca is a freelance game columnist, author, communicator, and a participant in the Amazon Services LLC Associates Program, an affiliate advertising program designed to provide a means for sites to earn advertising fees by advertising and linking to http://amazon.com. If you like what we do here at EN World (the Forums, Columns, News, etc.) and would like to help support us to bring you MORE please consider supporting our Patreon. Even a single dollar helps!
R

Eyes of Nine said:
Oooh, yes. This sounds good. I'm thinking an artificer who has created an entire set of gear for rendering foods and cooking delicious meals.

Concept does seem to be adjacent to another thread on this forum about if you eat the goblins you killed, are you evil? (I kind of skipped that thread)

Yeah missed the goblin eating thread. I once played a 2E Darksun halfling whose sole goal was to get a pressure cooker.

R_J_K75 said:
I'm not a big fan of venison so I've never really looked but I don't ever recall seeing it available in a super market or butcher shop. Suppose it may be special order but something tells me because deer carry disease it may not be something common in retail.
Click to expand...


Wild deer carry disease. Farmed venison is as clean as any other meat.