Matt Corley of Saturday Morning Scenarios (publisher of Lamp’s Light Sanitarium and Harper’s Tale) and I talk about his next Dungeons & Dragons 5e project, Whispers in the Dark: Quickstart Rules for 5e. Created with EN World columnist, M.T. Black, this quickstarter is a taste of the full product that they’ll crowdfund this spring. In this interview, Matt shares some details about the game, his past crowdfunding projects, and what else he’s working on. 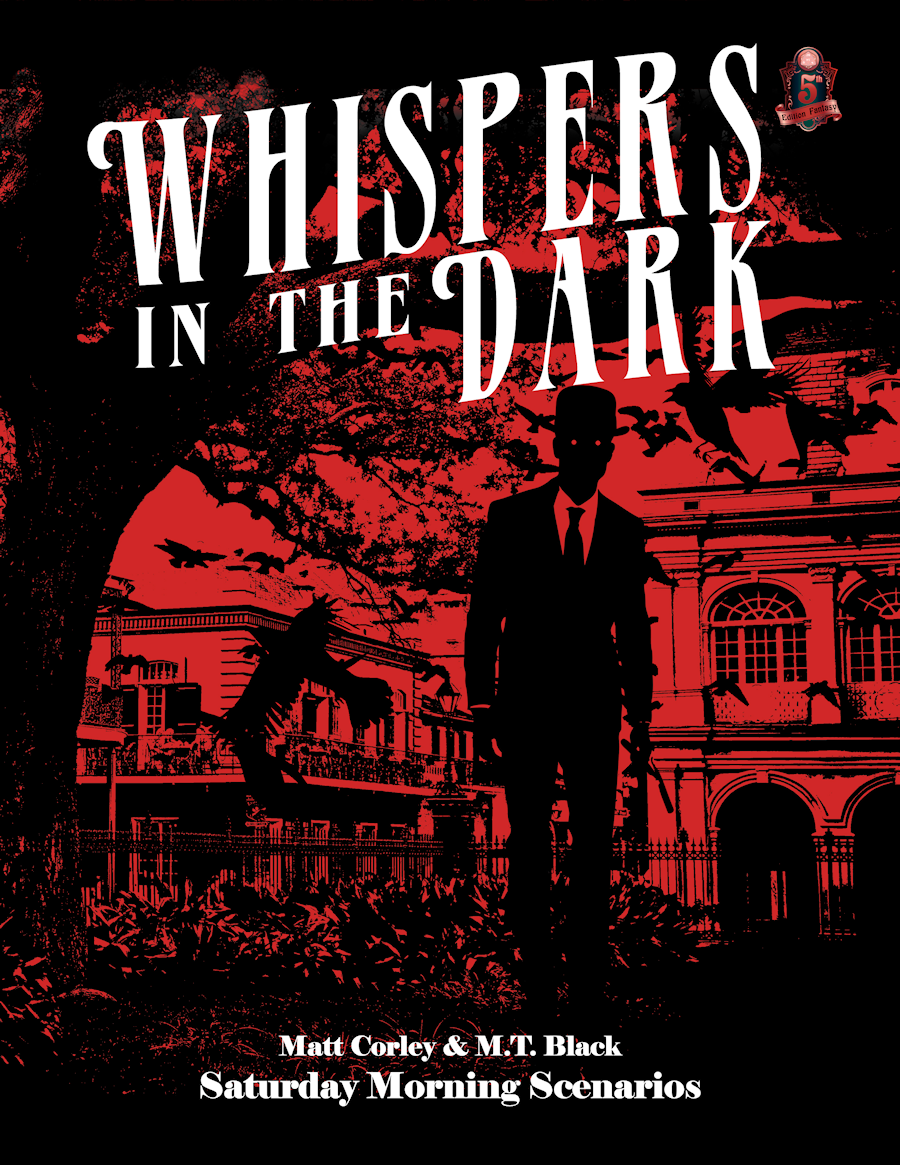 EGG EMBRY (EGG): Thanks for taking the time to talk with me about your project. What’s the pitch for this?
MATT CORLEY (MC): Whispers in the Dark is a quickstart ruleset with everything you need to play a game of investigative horror in gaslight era New Orleans, complete with an adventure and pre-gens. Players of D&D will be able to jump right in and enjoy a completely different gaming experience with rules that they already know. The rules were designed by myself and M.T. Black.

EGG: Victorian investigative horror is not the usual stumping grounds for D&D, what makes this the right rule set for Whispers in the Dark?
MC: 5e is a refined and highly flexible ruleset, more flexible than some folks think. With that flexibility comes the ability to make changes and tweaks to encourage game play in the spirit of genre, in this case investigative horror, that keep the core rules intact. The other reason is that my friends, and they’re not unique in this regard, don’t have a lot of time to learn new rules so leveraging an existing game with a huge fan base makes sense. Critical Role’s recent foray in the Lovecraftian RPGs proves that there are a huge number of players looking for that type of experience, and Whispers removes one of the barriers to playing, namely learning a whole new game.

EGG: For the investigative piece, are there new game mechanics?
MC: There are. The sanity/madness rules that I wrote for Lamp’s Light Sanitarium play a large role in establishing the mood of the game. The other piece is that M.T. and I chose to remove classes altogether, replacing them with a combination of background, feats, and ancestry. The other change isn’t specific to rules, so much as it is to writing/designing adventures. The first adventure, The Crow Man, includes graduated skill checks in which the higher your roll the more you learn, as well as a few other tweaks for skill checks.

EGG: Any new monsters for this world?
MC: Every good story has a villain, doesn’t it? Future books and supplements will expand the list of adversaries and NPCs significantly. They will also contain guidance how to adapt existing content for a Whispers game.

EGG: Obviously, Victorian New Orleans existed, how historically accurate will the city be (buildings and street names, etc.)?
MC: All of those details are accurate. Real people and real events are part of the Whispers universe. It’s what’s in the shadows and behind the scenes that’s fictional. If someone were to think of it as historical fiction/roleplaying, I would take it as a compliment of the highest order.

EGG: This time period falls in the Jim Crow era of segregation and oppression of African Americans in the United States. How do you plan on addressing that era and issue in this book?
MC: Our initial adventure does not tackle that issue, and, to be perfectly honest, I don’t think that I could give it the justice that it deserves. I grew up in the Deep South and did not have a lot when I was younger, but I’ve never faced even a portion of what others had to. If I find the right writer/designer for that story I’m happy to help them share it. 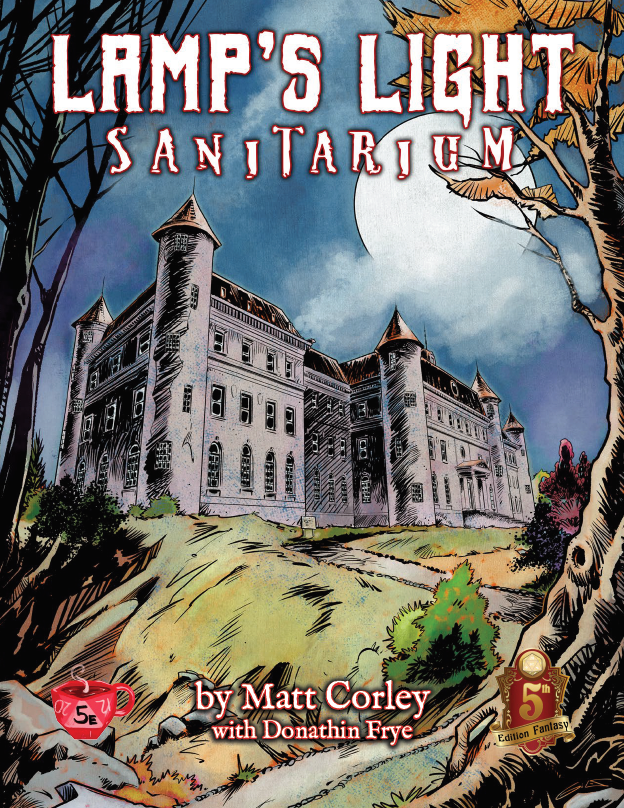 EGG: We spoke before about another Dungeons & Dragons 5th Edition product you crowdfunded, Lamp's Light Sanitarium (here). What’s the pitch for LL, and how does it compare to WitD?
MC: LL is a gothic horror campaign for D&D that is fully compatible with whatever campaign you’re running now and includes expanded sanity/madness rules that will introduce a new level of long-term consequences and roleplaying opportunities to your players. It includes two full adventures, a beautifully mapped sanitarium, NPCs, items of interest, and is a ready-made location with an atmosphere your players won’t forget. Other than the madness/sanity rules, LL doesn’t include new rules, and the inhabitants of LL are uniquely their own but still fall within a lot of D&D design philosophies. LL was me testing the waters not only on the sanity/madness rules, but also in the genre. While it’s more gothic horror versus investigative horror, they have more similarities than differences.

EGG: Are LL and WitD parts of a larger universe?
MC: They will be. LL will be converted to Whispers next year. The initial conversion will be an addendum added with the current book (and added so folks that have bought it can get it for free). It can be dropped into any city as it’s written (there’s an entire section on that in the book) easily. Down the road there will be a more thorough rewrite and update to place it firmly in the Whispers universe. 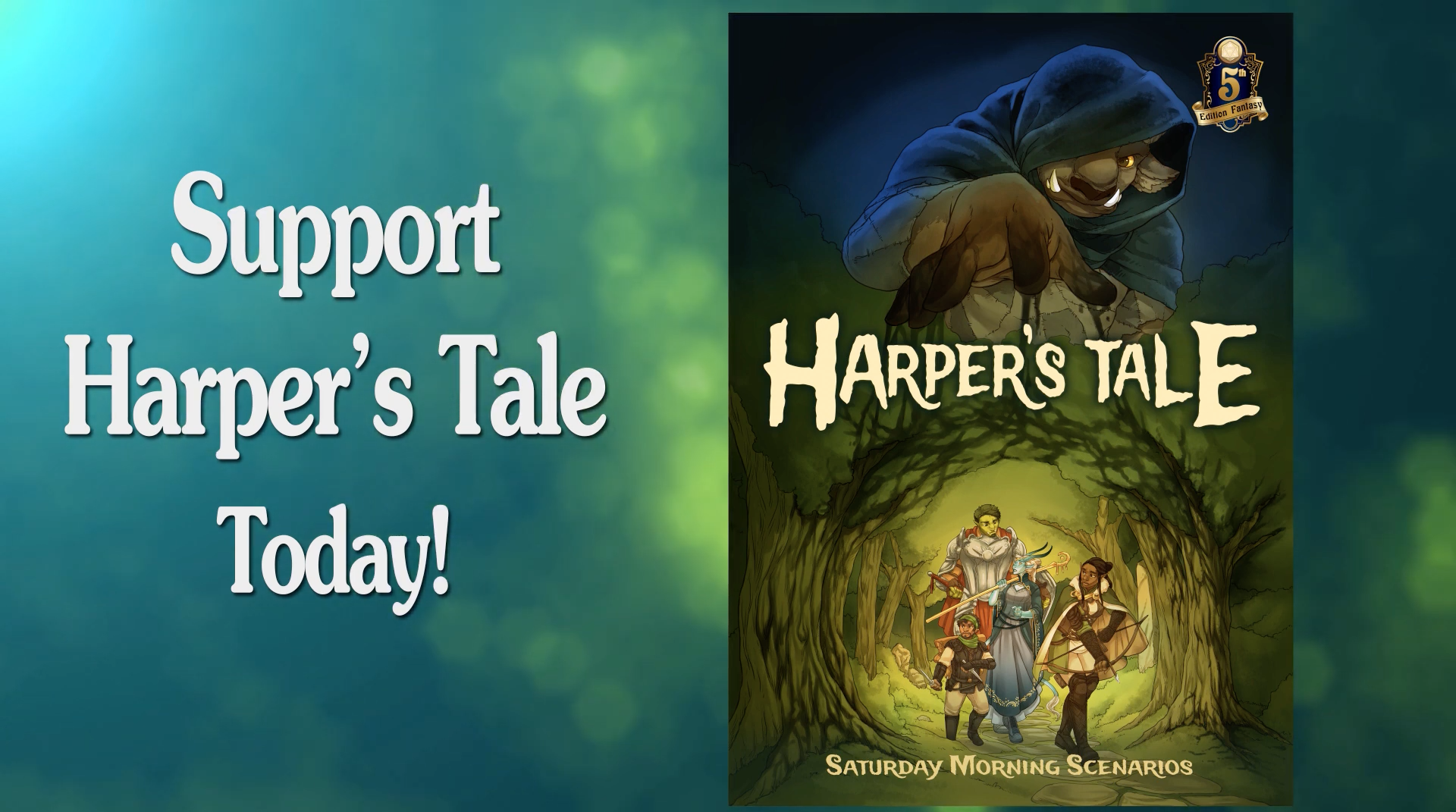 EGG: What other projects are you working on?
MC: I have four books next year from other publishers (one from Kobold Press, one from Infinite Black, and two from Petersen Games), but a lot of my work in 2020 will be growing Saturday Morning Scenarios and the Whispers universe. I have two, possibly three, crowdfunding campaigns coming, and other smaller releases planned.

The first is Devil’s Castle, which is a collaboration with a Bram Stoker award winning author and myself. It will include two multi-session adventures, an illustrated hardcover novella, and setting material for the city it’s located in. That one is tentatively scheduled for spring with fulfillment by Christmas.

The next is a philanthropy project with Make-a-Wish. They granted Harper’s wish this fall, and were really excited about the success of Harper’s Tale, so, we decided to do a fundraiser together. [AUTHOR’S NOTE: Listen to Morrus and Peter Coffey’s interview with Matt about Harper’s Tale on their podcast (here).] I can’t say too much yet, but the crowdfunding date on my calendar is the Tuesday after Gen Con with a fulfillment in late spring 2021.

Last but not least is another Whispers project. I’ll be working on two books (one with a Bram Stoker award nominee) of significant size and scope between other projects, and whichever of those two gets the farthest along will be my final crowdfunding project of 2020.

EGG: Thank you for talking with me. Where can fans go to learn more about your work?
MC: I’m on Twitter entirely too much (@matthewdcorley) and it’s the best place to keep up with my projects and ramblings. I’ve just created a website for Saturday Morning Scenarios. Thank you so much for the interview, your time, and help getting the word out. We couldn’t do this without you and everyone reading this!

Thank you for the interview Egg!

This looks pretty cool. Reminds me a bit of the old Ravenloft: Masque of the Red Death boxed set. I'll have to check this out.

hawkeyefan said:
This looks pretty cool. Reminds me a bit of the old Ravenloft: Masque of the Red Death boxed set. I'll have to check this out.
Click to expand...

The feel is similar. If you liked that one I'm confident you'll like Whispers too

matthewdcorley said:
The feel is similar. If you liked that one I'm confident you'll like Whispers too
Click to expand...

I grabbed a copy! I'll take a look at it shortly and share my thoughts. From a quick look, it definitely seems worth checking out.

This i like, so tired of the fantasy setting thing as burned out and so over done in D&D

Thank you, just a growing fan base that is tired of fantasy settings.