5E Witness The Mighty And Terrible Face Of War In A World Of Magic!

In War of the Burning Sky, you will have the chance to fight in a war of mythic proportions, and determine the fate of many nations in its aftermath. Ever-escalating conflicts, powered by mighty magic and fervent faith, threaten your freedom and lives, and even the world itself. This critically-acclaimed adventure path is back, revised and updated for your 5th Edition games! 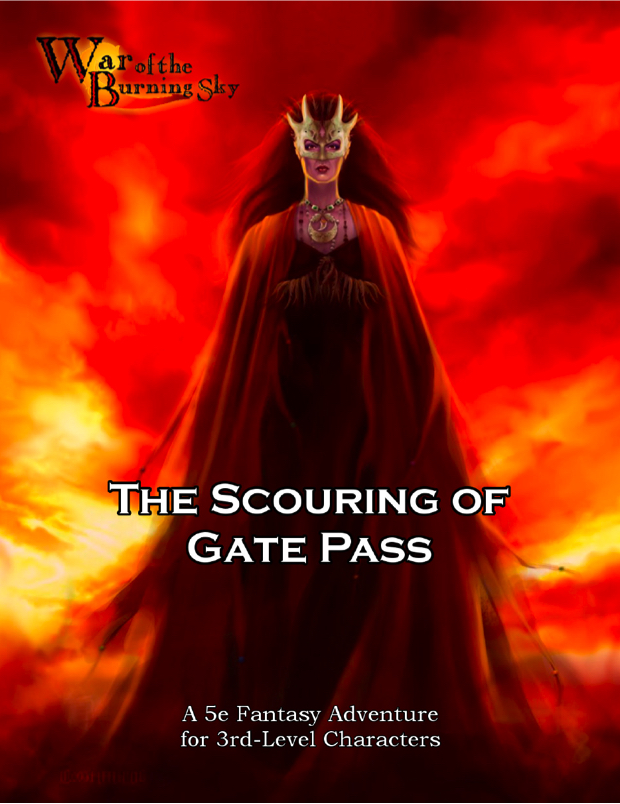 Released today are the first adventure - The Scouring of Gate Pass - plus the free Player's Guide and Campaign Guide.

As the new year turns, the weather takes a sudden chill turn, and the sky darkens as the grip of winter intensifies. Worry rises as regular channels of communication between nations cease like a candle suddenly snuffed. Slowly, throughout the lands claimed by the Ragesian Empire, rumors spread between isolated villages, traveling by foot and horse and word of mouth — rumors that Drakus Coaltongue, the immortal emperor whose armies conquered every land he set his gaze upon, has fallen in a distant land to the west. How the tyrant was defeated is unknown, but if it is true, everyone knows that a war is coming. The generals of Emperor Coaltongue will strike for control, oppressed peoples will rise up in rebellion, and dangers once held in check only by fear of the mighty warlord will bring doom to the world.

Those in power are preparing for the coming conflict, readying fervent armies and powerful weapons and subtle, deceptive plots, but two questions burn in their minds: who killed the seemingly-immortal Emperor Coaltongue; and what has become of the artifact that would let a man rule the world? Who has the Torch of the Burning Sky?

E.N. Publishing presents a saga of twelve adventures where would-be conquerers bring the world to the brink of annihilation, and it is up to the heroes to decide who will rule in the aftermath of the great war – perhaps an ally, perhaps themselves, perhaps even anarchy. They can usher the world into a golden age, or let it be scorched under a rain of fire.

A cohesive storyline, memorable NPCs, imaginative set-pieces, moral conflict, action, adventure, politics – War of the Burning Sky has it all!

And then, in the stunning finale to the War of the Burning Sky adventure path, the heroes will lead their armies on a final assault against the might of the Ragesian Empire, and cut out the heart of their foe, the tyrannical Leska.

Can this be adopted to FR somehow?

Ymdar said:
Can this be adopted to FR somehow?
Click to expand...

War of the Burning Sky is intended to be able to fit into any setting. The "Tweaking the Setting" section of the campaign guide has suggestions on the important parts to bring over into the setting of your choice.

Ymdar said:
Can this be adopted to FR somehow?
Click to expand...

The only thing that might be an issue, and you can always hand-wave it, is the ideal of the Emperor. There is no Emperor type(and only a handful of kings/queens) in the Forgotten Realms. That said, make it yours. Pick a place that fits in with this adventure and run with it. I was wanting to convert it to WOIN but may be seriously distracted by the 5e version.

One of my absolute favorite Adventure Paths, as is evident by my copies of 3.x and 4e versions... ahem.

**edited for words. Words are hard.

I think I saw someone tweaking it for FR and it was centered around Thay/Rashemen.

However, I don't think it necessarily requires a parent setting as there is much established lore and regional history in the adventures and guides and the campaign is designed for level 3-20 anyway.

What the adventure setting lacks though are distinct deities.

Lylandra said:
I think I saw someone tweaking it for FR and it was centered around Thay/Rashemen.

However, I don't think it necessarily requires a parent setting as there is much established lore and regional history in the adventures and guides and the campaign is designed for level 3-20 anyway.

What the adventure setting lacks though are distinct deities.
Click to expand...

Yeah, I added a sidebar regarding the lack of an established pantheon. The adventures and guides refer to deities by their domain. So a GM can choose a pantheon and then use an appropriate deity as necessary from the pantheon.

EDIT: This was for those unfamiliar with the adventures and setting. I think @Lylandra 's knowledge of War of the Burning Sky might only be topped by @RangerWickett.
Last edited by a moderator: May 24, 2018

I'd say that if you love Forgotten Realms, you've got a few options.

1. You can run the first act of the campaign, and set it just about anywhere. Just choose what forest you want to set on fire, and change the scope of the war so it only affects two major nations and some borderlands.

2. You can run the first two acts of the campaign, making it into a regional war with five big nations. Choose some country to turn hostile to magic users. I think Thay works, though you'd want to reskin it as 'hostile to disloyal magic users.' Tweak some of the backstory and reskin locations and major characters.

3. Run the whole campaign, but understand it amounts to a mild 'Realms Shaking Event.' The campaign goes to 20th level, so by the end don't be surprised if at least whatever region you set it in has been massively upended.

I'm still pissed off that I never got the Pathfinder version of this Adventure path.

Unfortunately, I cannot do anything about a Pathfinder edition, but War of the Burning Sky is rolling out for 5e, and it has now come to Roll20 as well!
https://marketplace.roll20.net/browse/bundle/28/wotbs-the-scouring-of-gate-pass
View attachment 97946​

yeah, having no real PF version is quite unfortunate, especially since I DM the campaign for PF as well. But the 3.5 version can be converted without too much of a hassle as long as your players don't do ridiculous optimization.

Most of the used monsters are in the PFSRD and the monster DB. NPC's HP, attack and defenses need to be adjusted though, especially at higher levels. 3.5 was rather bad in this regard and therefore most NPC enemies are rather weak.

I have DM'd this one in the past (tabletop) and loved it. Any chance it will come out for Fantasy Grounds?

dmmelkor said:
I have DM'd this one in the past (tabletop) and loved it. Any chance it will come out for Fantasy Grounds?
Click to expand...

It is likely to come to FG down the road. For now, it is available as a PDF and on Roll20. In a couple weeks it should have cleared the Print on Demand approval process.

FINALLY!!! I ran the entire 30 level 4e version, and it was literally the only reason my group played 4e. I wanted to convert it, but the rulesets are too different. I cannot wait for this to be complete.

Is there a way to subscribe to this, like there was before, so we know right away when the next title comes out?

Nareth said:
FINALLY!!! I ran the entire 30 level 4e version, and it was literally the only reason my group played 4e. I wanted to convert it, but the rulesets are too different. I cannot wait for this to be complete.

Is there a way to subscribe to this, like there was before, so we know right away when the next title comes out?
Click to expand...

There is not currently a subscription option. Each release will likely receive a front page news item on enworld.org, and if you receive the weekly news summary, you will see it there. You can also follow ancrisit and morrus on twitter. DriveThruRPG/RPGNow also has a "Follow Your Favorites" option that tells you when there are new releases from your favorite publishers. Just mark EN Publishing as a favorite in your account. 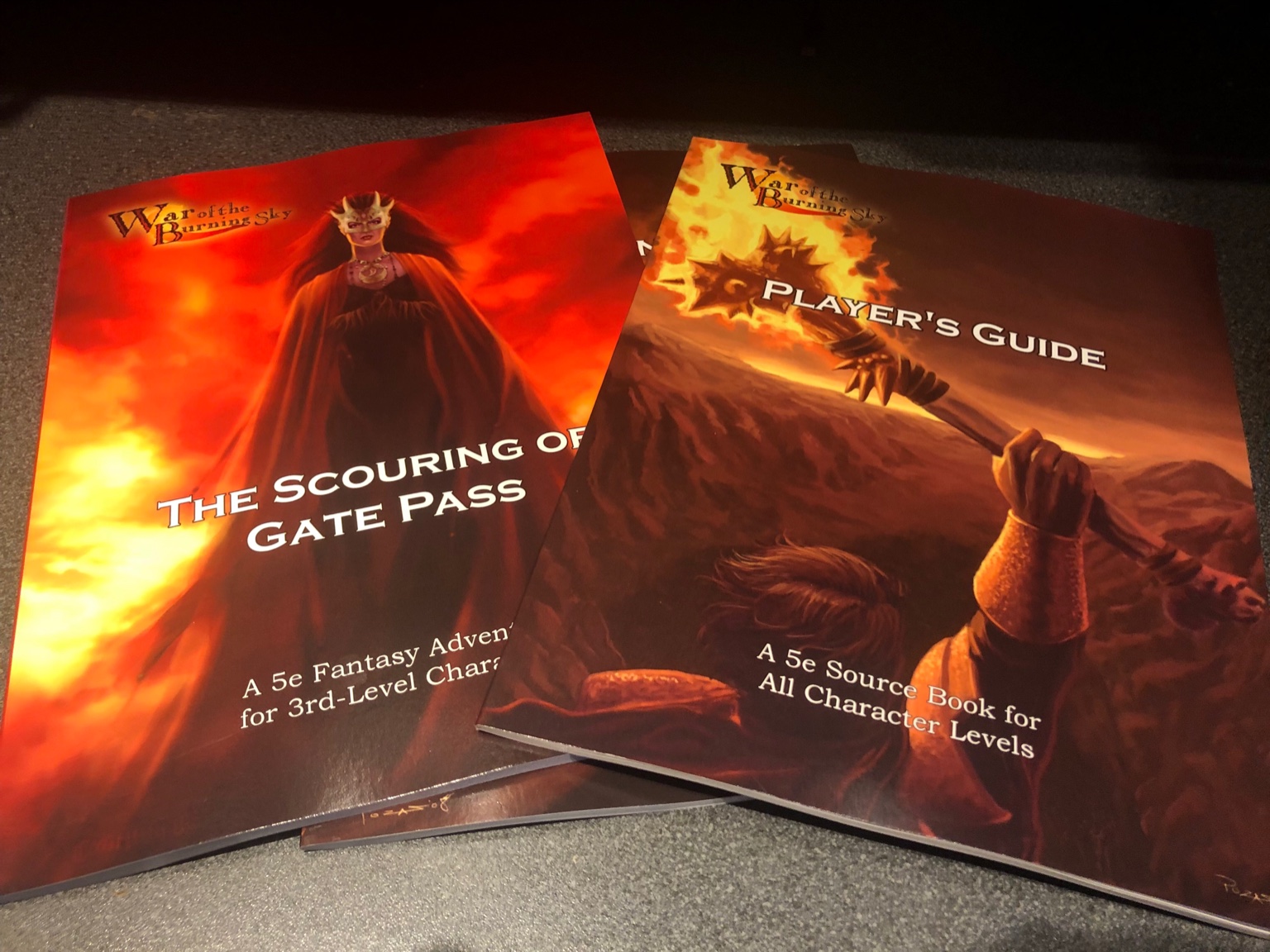 Sort-of-sorry about the necro, but regarding the questions about converting it to Forgettable Realms and other settings besides the one it comes with, the whole thing takes place on a fairly self-contained peninsula about the combined size of France and Spain. That - and actually, not even all of it - is all Coaltongue was the emperor of. We're not talking world-spanning empires that would change the entire nature of a setting here. It's strongly implied that there's other nations, and active trade with them by sea, but they're not detailed and can be whatever you want, although it would explain a lot if at least one of them had a pseudo-Chinese culture. Even the titular Burning Sky - a magical phenomenon that's screwing up teleportation as of the start of the campaign - could be localized, specific to that region. It should be fairly easy to drop into an existing campaign world and use its lore.

The books are also deliberately vague about deities, though I found that the Golarion pantheon worked very well with some nice coincidences where it was almost like it was written with those gods in mind (it wasn't - most of it predates their publication).