Your maps are incredibly good !

That's not a problem. Use 'em and abuse 'em. If you post them online someplace for your players to reference, then make sure you link back to this thread and list my name with the map. (See under sig.)

make sure you link back to this thread and list my name with the map.
Click to expand...


Sure, you deserve all credits for such a fantastic work!

By the way , my campaign start tomorrow just somewhere inside the fallenlands ( maybe a bad choise for maps are not still ready , but is in line with the beginning of the story i told my players few weeks ago, before discovering your fantastic work) ...

JahellTheBard said:
By the way , my campaign start tomorrow just somewhere inside the fallenlands ( maybe a bad choise for maps are not still ready , but is in line with the beginning of the story i told my players few weeks ago, before discovering your fantastic work) ...
Click to expand...

Great to here. Let me know how it goes. What races are you planning to use? I take you've read my Fallenlands thread in the Rogue's Gallery forum, correct?

And here is a quick Fallenlands map for you (JahellTheBard) to use. There isn't a scale on this map, so you can decide you're own scale if you like. (Assume the distances are fairly vast but not super-vast.) The cities marked are the major cities in the region. Others are possible but rare (likely hidden).

The Mountains of NarsKasis are where the bulk of the nagpa civilization lives. Craloona is the capital city of the nagpas.

Crilian and Askinesiks are cities dominated by the jann. Giakk is a mixed city. (The jann still dominate the population, however.)

Note: Humans are very rare in the Fallenlands; they are almost unknown in some areas. Humans on this continent fall into one of two categories: (1) the cyradi who live in the canyon known as Shapneka and (2) human visitors from other continents. 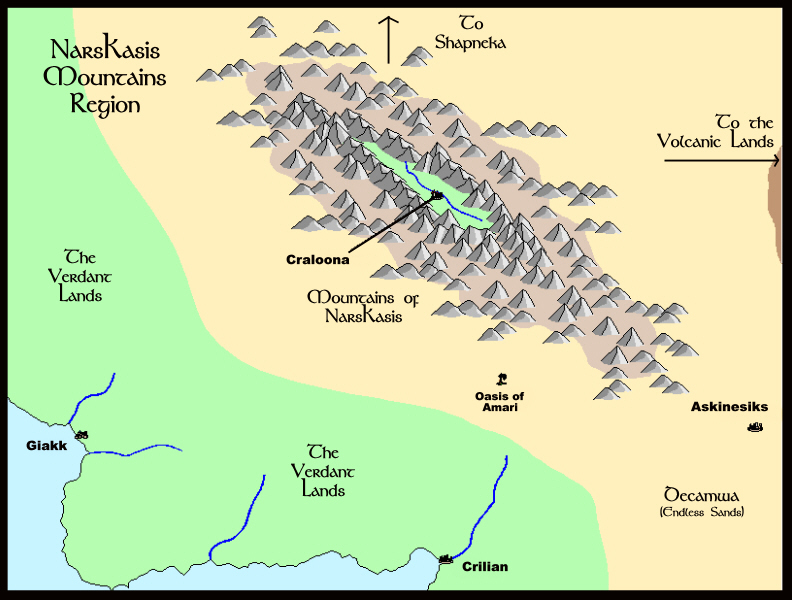 Here's another map I did of a region I call the Bay of the Horn. This area on Triadora is dominated by a race of unique minotaurs, ususally called Horn Minotaurs. I did it is a slightly different style then most of my other maps.

I haven't really thought beyond the fact that the captial city of the minotaurs is Hulnin. The War War is my version of the Great Wall of China and the area beyond it is dominated by a race of lizardfolk known as the Xanth.

Anyway, this is all for now. 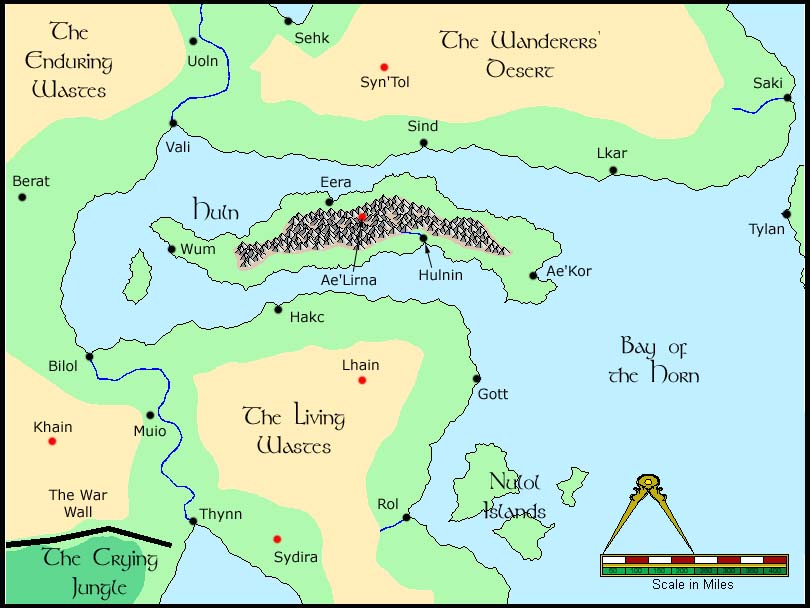 Here is a new region I've just started working on. Crilian is the city-state where The Companions first arrived on The Fallenlands while seeking the legend of a magical artifact known as Ogrebane.

I'll post some information about Crilian on my Fallenlands thread in the Plots and Places forum when I get a chance. 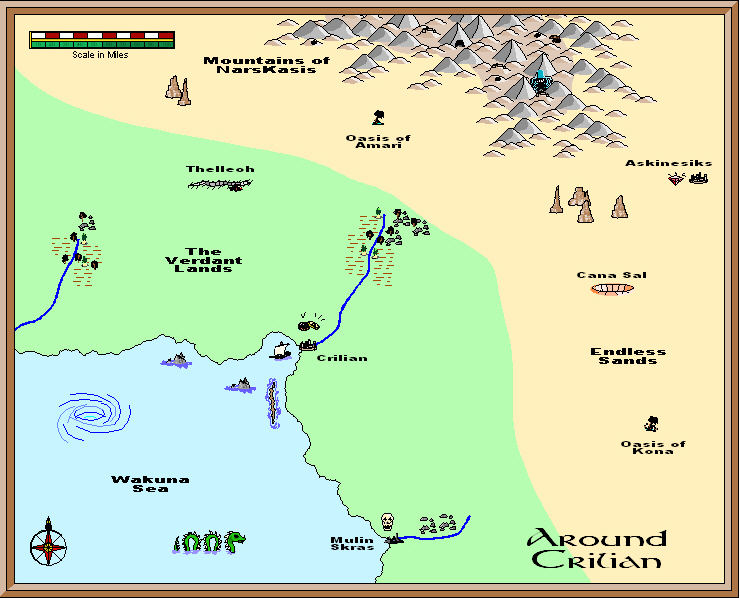 This new map shows the area directly around the City-state of Crilian. The Crilian Onshore is known for more than the city; it is known for half-a-dozen powerful jann mercantile houses that control many of the surrounding communities.

The communities beyond those listed are too distant from Crilian for the city-state to control them. Most city-states can only control those areas directly linked to them by roads. The jann are powerful, however, so they often ask for tributes once a year from those just beyond their direct reach.

The strongest of these independant communities is Taid'd. More of a fortress than a town, Taid'd protects its interests and those of its vassal communities — J'kain and Raliqu. It opposes any sort of control by Crilian and other city-states such as Giakk far to the west. 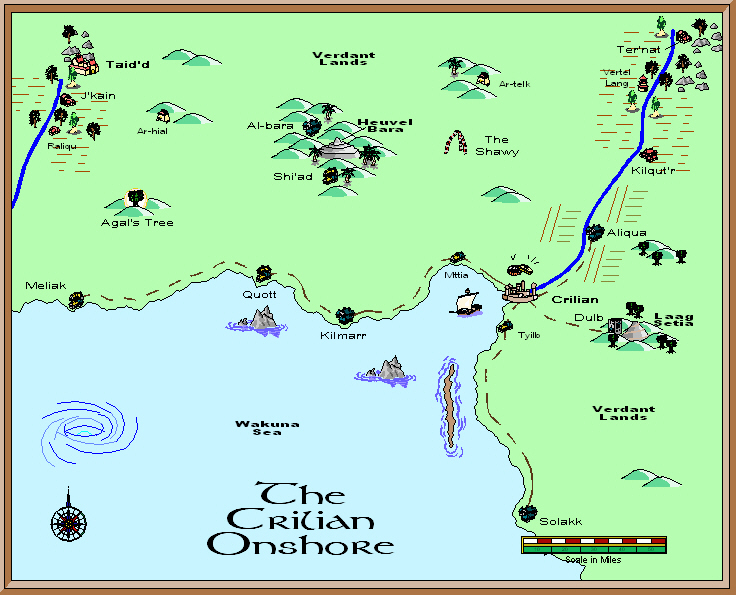 This map shows the extreme southern end of the Mountains of NarsKasis as well as the region west of City-state of Askinesiks. NarsKasis South isn't so much an official regional name as a simple name for me to remember for the map.

Therefore, no one in the Fallenlands refers to this region as NarsKasis South or the region near the northern edge of the mountain range as NarsKasis North, which is what its map will be called once I create it. Instead, the Fallenlanden races refer to a region by its notable locales and natural features.

This can be confusing to races from other continents.

Regardless, in this region, the City-state of Askinesiks dominates; although, its jann rulers don't officially control much beyond the city's walls. However, its influence can be felt as far away as the town of Huin in the Mountains of NarsKasis.

Huin and the other mountain towns shown (Gulta, Quoza, Rielmys) are strongly aligned to the nagpas of the Valley of NarsKasis, which is located deeper in the mountain range.

Another location of note is Kalib Bokr, which is an ancient ruin from the time before the Fallenlands' Age of Isolation. It is believed that the ruins are related to the Cyradi civilization in the canyon known as Shapneka, yet all those who have delved down into the ruins have never returned.

The Facets are crystalline forest jutting out of the sands, and the sinkhole called Cana Sul is said to lead to the Underearth and some sort of ancient insectoid civilization.

The Bray is a gathering place for shapechangers, especially lycanthropes. It is considered a holy place to them. This includes the hengeyokai too.

Note that in the Fallenlands, people are less likely to be persecuted for being evil. Good is still a strong force, but it doesn't dominate the rules of every society. Law and chaos are just as likely to hold sway over a particular region; however, the cities tend towards law, while the more independant communities tend towards chaos. 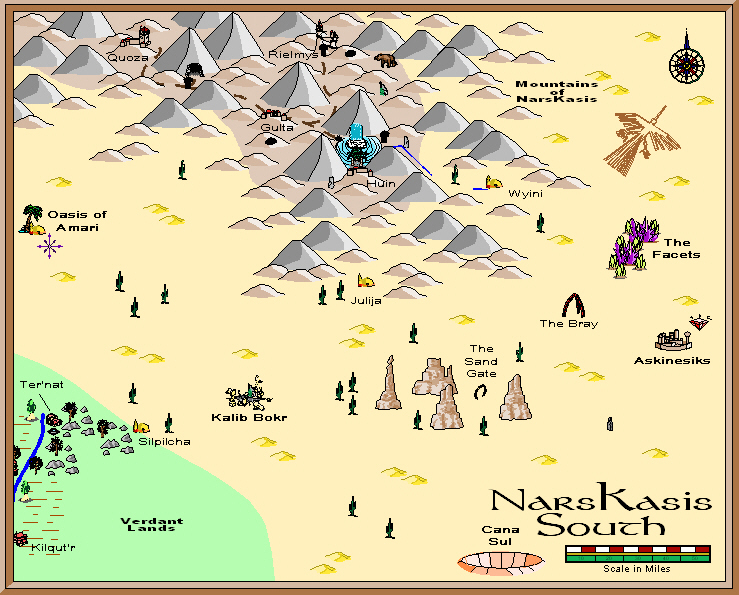 NEW MAP: Around the Thellech

The ruined rift known as Kalib Bokr is also one of these rift-canyons. (See the NarsKasis South map.) The most famous of these ruined lands is the Volcanic Lands, which dominate the center of the continent.

As a result, Thellech Hold is a rich, large town with many suitors. It plays the merchant lords of Crilian against the independant communities of the Verdant Lands. It pays tribute to Crilian once a year, but the amount of the tribute decreases every ten years. Erinika is its only vassal community.

Khidasse is more than just a town; it is a large community made up of various races. Its citizens live as a commune and they protect each other from external threats. The commune grows its own food and has its own water supply — a well that is never dry. The only thing that saves it is that the citizens sell extra foodstuffs and water to other communities in need. Plus, some of its citizens are powerful ex-adventurers. 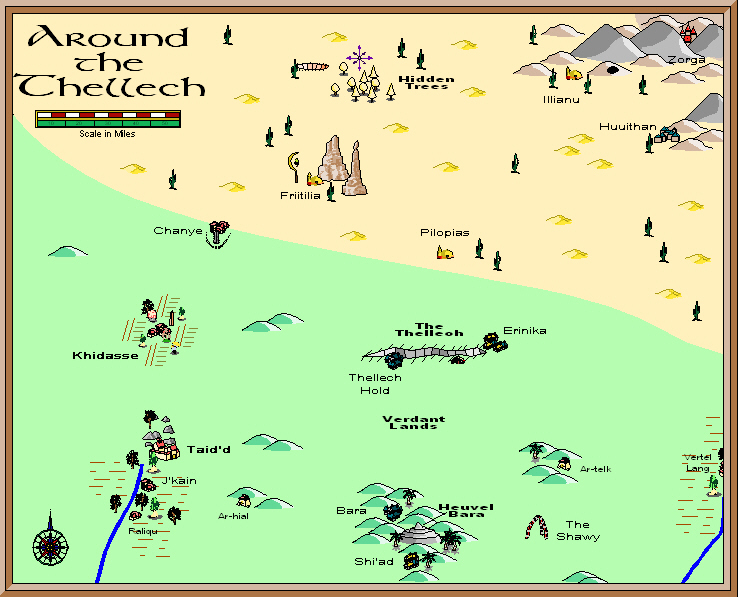 Bumped for my reference.

Here's a map I created for World of Kulan that reproduces the Isle of Dread on my world. I used the Savage Tide map as a guide. 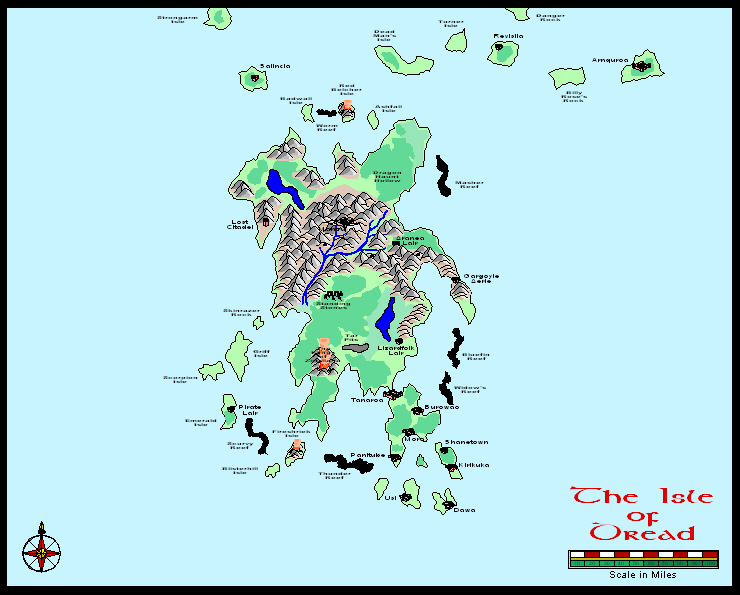 Closeups of Isle of Dread... 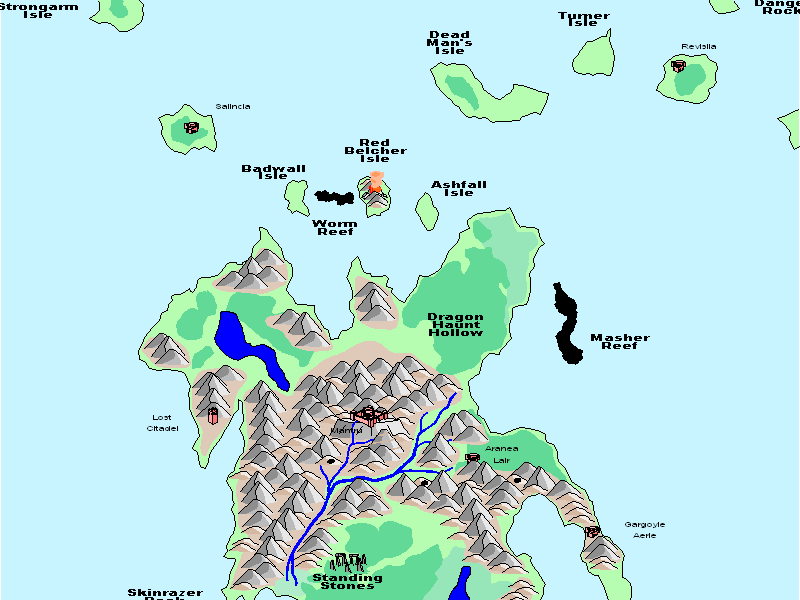 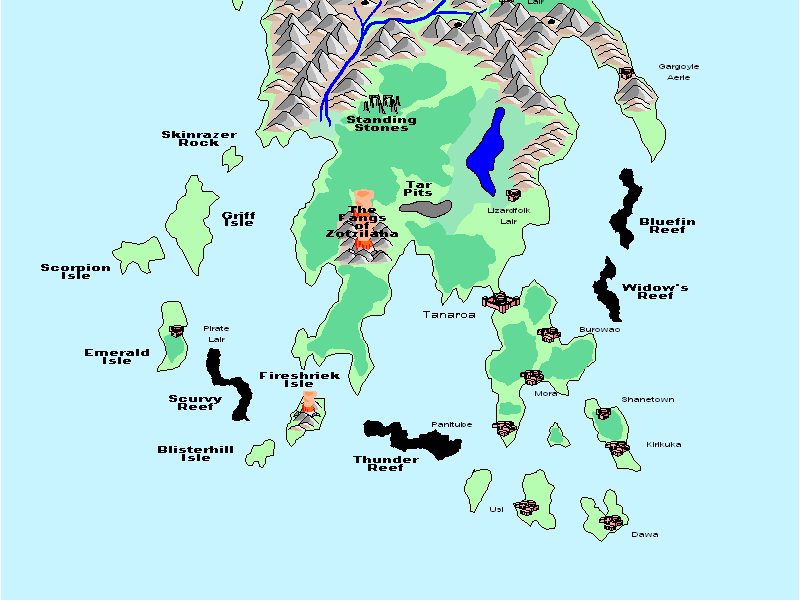 Here's another closeup around Tanaroa. 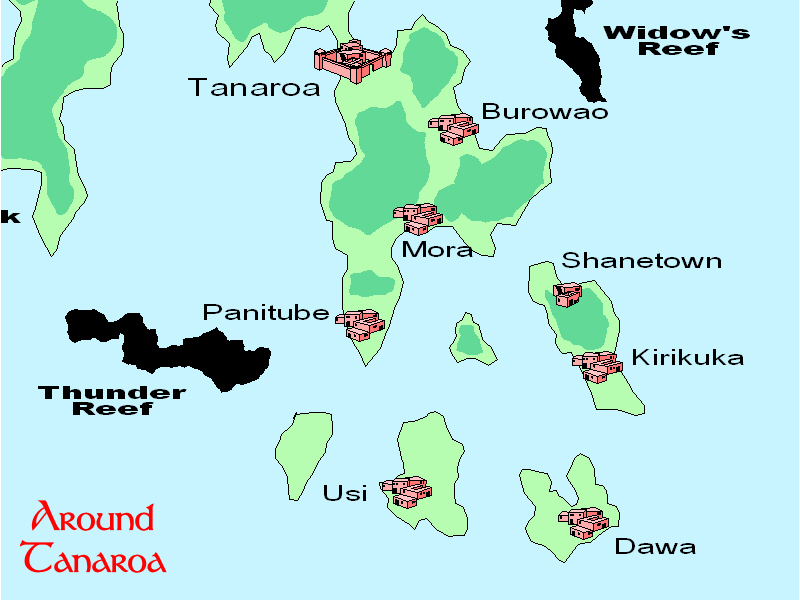 SERPENT'S TEETH REGION
(Some of the text below is updated from an earlier post.)​
Arek

Calrendia
"Calrendia is made up of several smaller allied nations and territories."

— From Black Robes, White Hearts: Enigma of the Arcanexus​
Since the Arekoz website has disappeared into the Internet mist, I can't really say much about Calrendia. The excerpt above is taken directly from White Robes, Black Hearts: Enigma of the Arcanexus (EotA). Note, however, since my Calrendia is very close to the equator, the land will be portrayed differently. (No knights in heavy platemail in my version of Calrendia.) I'm thinking eagle and jaguar knights combined with some European-style flavor. (Hmm . . .)

Empire of Mhul, the
"Mhul is an empire that has been in decline for over a thousand years."

— From Black Robes, White Hearts: Enigma of the Arcanexus​
Another region from the Arekoz Campaign Setting; this one isn't as vitally important for EotA beyond the fact that the chief bad guys are from Mhul. In my campaign world, Mhul will be connected to the past given for Freeport (i.e. the lost Empire of the Serpents). The land is going to be full of evil necromancers and their ghulish servants as well as the White Robes. I expect a sort of "ju-ju" vibe for Mhul with dark jungles and savage hills.

Gateway, The City of Living Waters
The City of Gateway is one of the most important and largest cities in this region that isn't located on a sea coast. Dark Portal Games created a free PDF detailing Gateway, which I still have, but I don't think it is available online anywhere, anymore. Therefore, I'll likely post a stat-block for Gateway based on the one in the PDF but with my own "twists" added in. (FYI: The PDF was co-wrote by none other than our own Darrin Drader, and he and I co-wrote EotA along with Tony Bounds.)

Vehrmon
"Vehrmon is ruled by its wealthy merchants and its religious leaders."

— From Black Robes, White Hearts: Enigma of the Arcanexus​
That's all I've got. I guess that means I have to make up the rest.

The Serpent's Teeth
Freeport
The Serpents Teeth — the islands known as Leeward, T'wik, Windward, and the large central island of A'Val. These are the islands of Freeport. Note that the islands called Gelem and Gulmagesh are part of the Serpent's Teeth; however, they aren't considered part of the area controled by Freeport. Freeport has recently been updated in Green Ronin's The Pirate's Guide to Freeport, and it is a mainstay in my campaign world. Freeport is the destination of choice for any captain that doesn't want to undergo the scrutiny of the dockmasters of Sulluhal's ports.

Sulluhal
Gelem and Gulmagesh are controled from the cities of Sullgasa and Malthaga. (Note: All those place names are from EotA.) In Arekoz, those two cities are likely part of Mhul, but I'm not sure. Therefore, IMC, I've decided to make those two cities and several other communities part of a thalassocracy I call Sulluhal. This "empire at sea" is Freeport's greatest rival in the region. Sulluhal is independant from Mhul but pays a yearly tribute in order to remain independant. For while Sulluhal has naval superiority over Calrendia and Vehrmon, it wouldn't be able to withstand a direct conflict with the White Robed priests of Mhul. 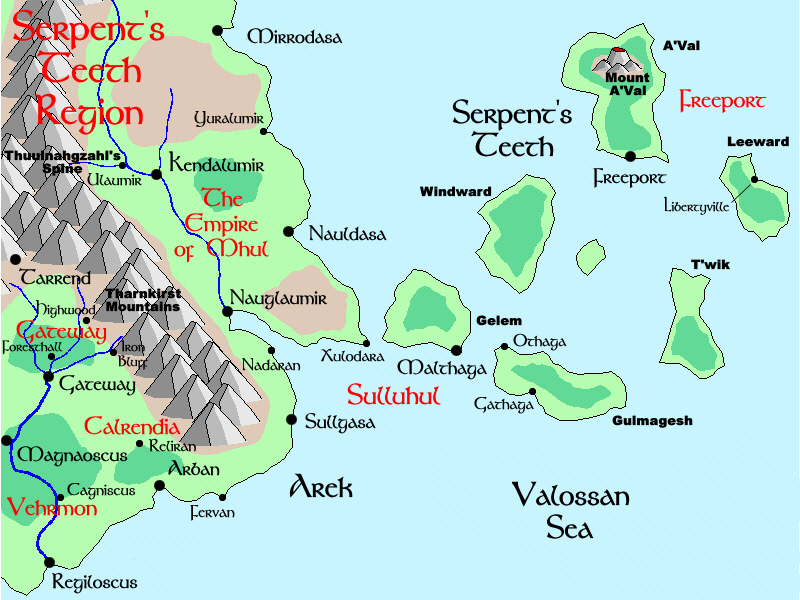 Description to be Posted. Later. 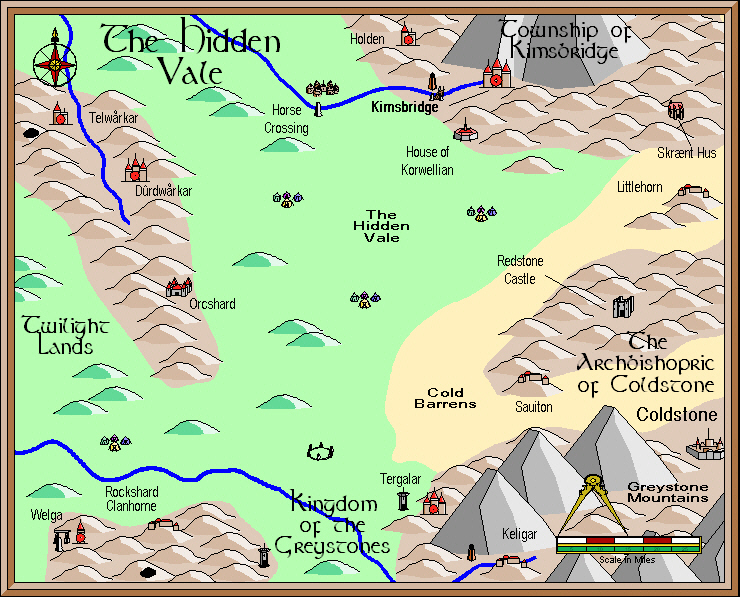 Bumped for my reference. I'm going through all the pages and copying down the tidbits about the various regions of Harqual. I didn't have a backup of that information on my computer, and I felt I needed to copy it from the thread due to the recent difficulties EN World has been having. Plus, it's just a good idea.