We recently made "tavern steaks" from the Heroes' Feast cookbook, an excuse to place hamburgers in a fantasy setting. But that's not the only anachronism that creeps into our campaigns. 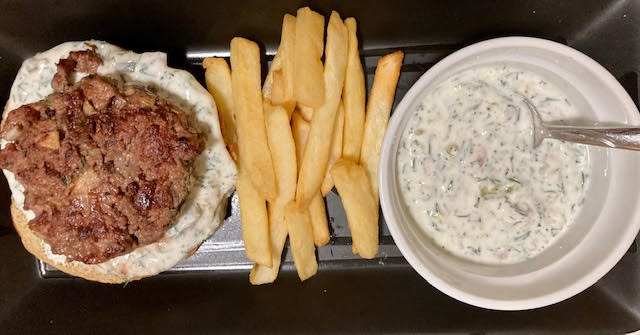 Quick to prepare and highly flavorful, these juicy patties are made of mixed ground meats (both pork and beef or beef and lamb are popular combinations) kneaded together and are chock-full of rich seasonings. Tavern "steaks," as many refer to them, are grilled upon an open flame to help seal in the savory flavors. Often served sans bun with a variety of mild spreads, including fresh creamed dill-yogurt sauce, crushed tomatoes, or a black olive and fig sauce, tavern steaks are a fast dinner option for the hurried tavern hopper.
Click to expand...

If this sounds familiar, you're not alone in thinking that these are basically hamburgers. The picture shows the patty sitting on a piece of toast covered in dill sauce with the patty on top to further distinguish it but there's a reason "steak" is in quotes. And there's a mention of buns, which aren't part of the recipe and are never mentioned again. 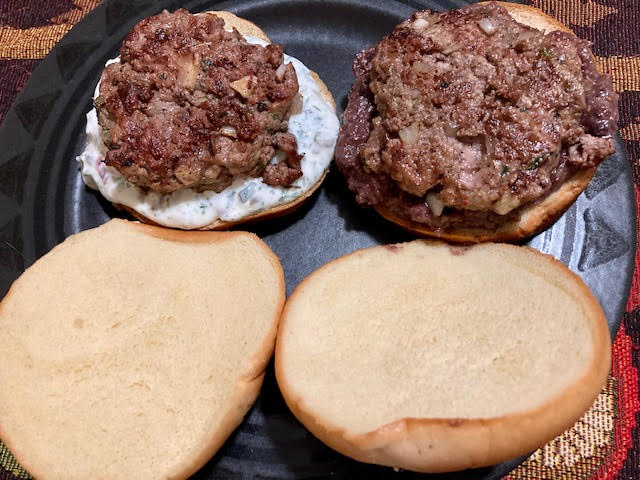 A Burger to Go​

The real life inspiration for the hamburger is disputed; although it is now primarily associated with American cuisine and fast food in particular, the idea of chopped meat goes back centuries, with the German city of Hamburg laying claim to its more recent incarnation.

This burger recipe involves ground lamb and beef. For convenience, it seems likely that most taverns would simply use whatever meat they had available, so combining lamb with beef seems unnecessary but definitely gives it a different flavor from a basic hamburger. The recipe's biggest differences is in the sauces: dill-yogurt and black olive & fig.

The dill-yogurt sauce evokes the flavor of a Big Mac from McDonalds, a white sauce. It's delicious when fresh though and paired well with the "steak." The olive & fig looks unappetizing (there's a reason it's not shown in the picture accompanying the recipe) but is surprisingly delicious, combining sweet (fig) and savory (olives). For leftovers, I ended up using both sauces and that tasted even better.

This is one of the few recipes in Heroes Feast you can conceivably make for your players. If you make the sauces ahead of time, it's just a matter of grilling your favorite hamburgers, serving them on half a bun, and calling them "steaks."

It's a compromise to be sure but not necessarily a stretch to include a modern food in a fantasy setting. But the concession to convenience in a fantasy setting goes beyond just food, and lies somewhere in the gray space between modern players and a believable fantasy universe. 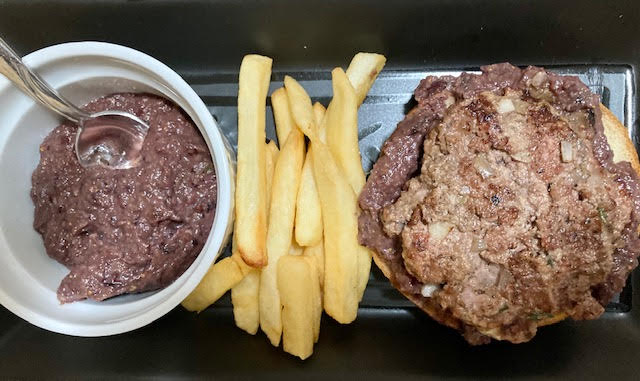 Dungeons & Dragons has pseudo-medieval trappings with some modern anachronisms thrown in for good measure. As Lew Pulsipher has pointed out in the past, D&D has certain baseline assumptions that don't always hold up when fantastical elements are introduced.

Of these, probably the most basic is language. I don't expect my players to change how they speak to reflect the many languages of my fantasy campaign, although some players use accents (and as a DM, I use accents every chance I get). The dominant culture tends to be a mix of Roman and British influences, modern enough to justify some technology players might take for granted but still different enough to feel like it's another world.

This means that we don't worry much about sanitation, for example. I've made it a point that the Calximus Empire has many advances, largely thanks to gnomish inventions they adopted like sewers (so we can have sewer adventures) and gutters (which became important in one of my novels when a rat was being chased by a snake, long story). But there are a lot of other aspects of life that would undoubtedly be uncomfortable to a modern player if they had to actually live there.

Some of these changes also make it easier to tell a modern story in a fantasy setting. Fantasy trains are a big deal in my campaign (known as Iron Dragons), known as Lightning Rails in Eberron. This means traveling long distances is much more feasible to someone who can pay for it; but mostly it's because I like to have fights on trains. Firearms have become common too because I enjoy inserting Wild West tropes into my game, including gunfights. I suspect I'm not alone.

So if my players want their characters to eat a burger now and then, I let them .. it's certainly not out of place next to indoor plumbing, trains, and pistols!

Your Turn: What anachronisms do you allow in your fantasy campaign?
Click to expand...

I mean the old romans did have fast food so it is not inconceivable, though I guess Kebabs would be more common.

Ulfgeir said:
I mean the old romans did have fast food so it is not inconceivable, though I guess Kebabs would be more common.
Click to expand...

On a stick? I can sell one to you for five coppers, and that's cutting me own throat.

The toppings for it look interesting, but yeah, it's otherwise just a burger. Heroes Feast is more a fantasy cookbook than a simulation of a medieval cookbook. Which is fine, there already are a bunch of those out there. It's more a descendant of the Leaves from the Inn of the Last Home's recipes section.

I try to develop and think through the food served in my games, as a form of worldbuilding. In my one world, you couldn't order a burger (at least not in the traditional beef sense of the thing) because it's a world of earthmotes that doesn't have cows or horses.

I made that recipe as well. The olive tapenade was incredible, and it'd go great on a lot of things other than the burger.

Dang it. Now I may become obsessed with actually making those, because they look delicious.

talien said:
Your Turn: What anachronisms do you allow in your fantasy campaign?
Click to expand...


RuneQuest's Pavis (1983) by Greg Stafford & Steve Perrin lists a number of city eateries including Bob's Bisonburgers. This establishment has a gigantic dwarf-made meat grinder in its courtyard which can reduce an entire bison carcass into hamburger.

And speaking of cheerfully anachronistic Gloranthan fast food, Casino Town, first described in the RuneQuest Companion (1983) has Red’s Globster on the Main Strip. It's a cheap and popular “all you can eat” buffet, provided you’re happy eating endless portions of vaguely fish-like material cut into various shapes then deep-fried or boiled. The proprietor “Red” hearkens from the Lunar Empire, and keeps a live walktapus out the back. Pieces are continuously hacked off for the pot. (Red also does a sushi platter, but you're strongly advised to stun each piece before attempting to swallow, or preferably use the Disrupt spell.)

Given these are fantasy campaigns - is it even possible to have an anachronism?

happylarry said:
Given these are fantasy campaigns - is it even possible to have an anachronism?
Click to expand...

You're spot on, but I think we're playing with a rather loosey goosey definition of anachronism here. Like in the late 90s when I had a D&D adventure that revolved around retrieving what was essentially Beanie Babies.

Yum. Psst time for my lunch!