With St. Patrick's Day nigh, we decided to cook a dwarven repast from Heroes' Feast: Corned Beef & Cabbage. It's also an opportunity to spotlight how different cultures express their identity through food in fantasy campaigns. 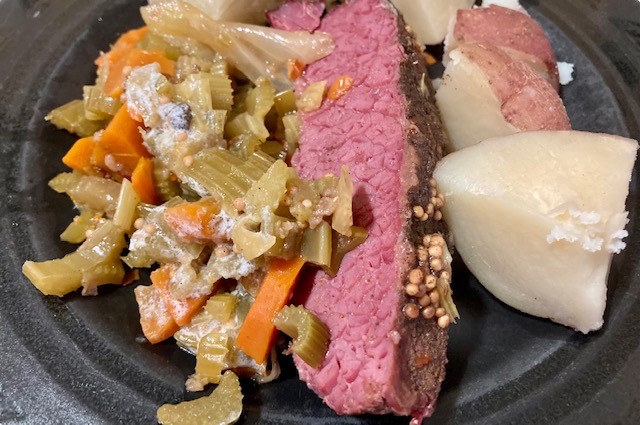 It's worth pointing out that corned beef and cabbage is associated with St. Patrick's Day in the United States, but that's not necessarily the case everywhere. Cows weren't commonly bred for their meat in Ireland; that came later thanks to expanding British influence. In fact, the term "corned beef" is British:

The British invented the term “corned beef” in the 17th century to describe the size of the salt crystals used to cure the meat, the size of corn kernels. After the Cattle Acts, salt was the main reason Ireland became the hub for corned beef. Ireland’s salt tax was almost 1/10 that of England’s and could import the highest quality at an inexpensive price. With the large quantities of cattle and high quality of salt, Irish corned beef was the best on the market. It didn’t take long for Ireland to be supplying Europe and the Americas with its wares.
Click to expand...

As you might imagine, tastes have changed considerably since then. Corned beef in the U.S. is actually made from brisket, a kosher cut of meat from the front of the cow. Because brisket is a tougher cut, the cooking process changes the flavor of the meat considerably to something much more tender than its predecessor. Heroes' Feast specifically recommends brisket for its recipe. 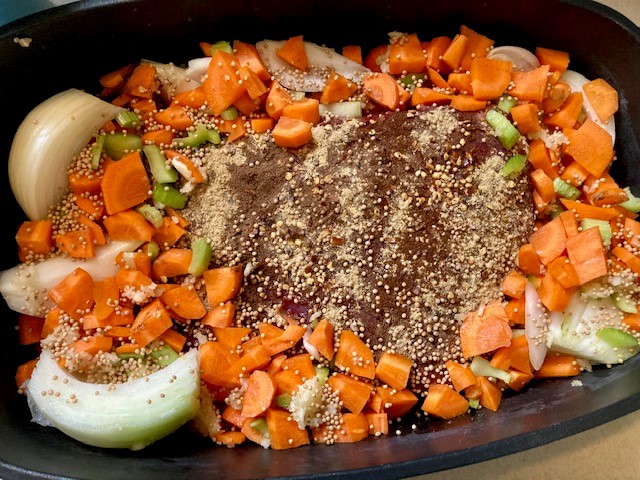 Heroes' Feast doesn't have much to say about the recipe other than it's associated with dwarves:

From the mines of the Ironroot Mountains to the halls of the Iron Hills, this savory winter repast is a favorite of dwarves everywhere. Hungry miners will blush pinker than the beef itself when their noses catch the distinct scent of coriander, allspice, peppercorns, bay leaves, thyme, and red pepper flakes wafting from a full-to-the-brim cauldron. Served in a light, tangy broth with generous helpings of boiled cabbage and doused in vinegar, this dish is sure to satisfy the sale cravings of even the saltiest dwarves (just as long as you don't forget the ale).
Click to expand...

The recipe calls for pickled spice, which were weren't able to procure in pandemic conditions, so we instead made our own. I also overdid it on the celery (as a new chef, I'm still learning measurements). This meal takes over four hours, so it's not something you're going to whip up for your players just before they arrive to game.

For all the references to salt, the recipe does its best to minimize your sodium intake. The butter is unsalted and the chicken broth is low-sodium, presumably because you'll add the salt yourself.

Overall, the meal was surprisingly tasty. It was spicier than I might have expected, but then we created our own pickled spice so that surely had something to do with it. Some kind of bread would go well with it (Heroes' Feast rarely mentions any sides to go with the recipes). All that said, there's a lot of meat and mostly vegetables so I'll be eating this all week for sure.

Where Do Dwarves Live, Anyway?​

There's a reference to Ironroot Mountains in the recipe's introduction, which is in Eberron in eastern Khorvaire:

The Ironroot Mountains are a stretch of mountains in eastern Khorvaire, lying parallel to the Hoarfrost Mountains and along the western border of the Mror Holds. It is believed that the Ironroot Mountains have some of the richest mineral deposits in Khorvaire. The dwarves of the Mror Holds trade and mine in these mountains, but their operations tend to come under attack by the Jhorash'tar orc clans. Many clans of Jhorash'tar orcs live on the mountains, making it incredibly dangerous for wandering travelers and even more so for any dwarves.
Click to expand...

Heroes' Feast also mentions the Iron Hills, eastward of the City of Irongate in Greyhawk:

The Iron Hills are a massive series of highlands extending eastward of the City of Irongate and surrounded by the United Kingdom of Ahlissa to the north and the Principality of Naerie to the south. The Iron Hills are the home of the Kingdom of the Iron Hills Dwur, ruled by King Holgi Hirsute (ml dwf LG Ftr15), who is firmly allied with Irongate. The hills produce very high grade iron ore, and several kinds of precious metals. Gnomes and humans do some of the mining in the area, but the largest and most productive mines are dwarven-run.
Click to expand...

There's nothing in either of the above wikis that explains the history of how dwarves came to create such a dish. Given the winding history of how corned beef and cabbage has come to be associated with St. Patrick's Day, a meal like this is an opportunity to tell their story, particularly of a well-traveled people who have faced a lot of hardship.

Your Turn: Is dwarven cuisine different from other meals in your campaign?
Click to expand...

Mike "Talien" Tresca is a freelance game columnist, author, communicator, and a participant in the Amazon Services LLC Associates Program, an affiliate advertising program designed to provide a means for sites to earn advertising fees by advertising and linking to http://amazon.com. If you like what we do here at EN World (the Forums, Columns, News, etc.) and would like to help support us to bring you MORE please consider supporting our Patreon. Even a single dollar helps!
T

LordEntrails said:
Agreed. I suspect most of the beef/beer thought is because of the stereotyping of dwarves as Scottish. Not actually by considering what might be likely for the culture.
Click to expand...

And Dwarves aren't even Scottish. LMAO

LordEntrails said:
Agreed. I suspect most of the beef/beer thought is because of the stereotyping of dwarves as Scottish. Not actually by considering what might be likely for the culture.
Click to expand...

(ok I know Scotland has some fine ales too, but please get your stereotypes correct)

I had a dwarven paladin back in 4e that frequently dined on rat...

“Why does ketchup cost almost as much as the rat?” said Angua.

“Have you tried rat without ketchup?” said Carrot."

But I'm fine with beef being a part of dwarven cuisine. Mountain dwarves may live underground, but they are not deep dwarves, and would likely have holdings on the surface - pastures, terraced fields, etc. Or if not that, access to trade. And that's not even getting to hill dwarves.


Thunderfoot said:
I've said it before, I'll say it again. The idea that beef is a staple for a race that lives underground is a travesty. Rats, mice, voles, bats, gophers, groundhogs, snakes; sure. Even the occasional pork or goat dish as a rarity but mostly because pigs could root out mushrooms (which would be more valuable) and goats for their milk and milk products (like sour cream and cheese.)
Click to expand...


Rothe will always be hilarious to me. 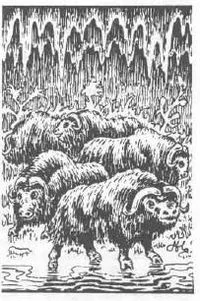 It all depends on how fat the rats are. I mean the ones in Luskan can be 15 pounds easily. And then whether you are one of those dainty elf-like eaters or are good to crunch the bones!

As someone who lives an hour away from the Alps, having dwarves raise cows doesn't seem particularly implausible to me. Cows and dairy products have a major economic and cultural significance in the alpine regions (see the wikipedia article on transhumance) and it would be odd for a mountain-dwelling people to not use perfectly good grazing land.

A good beef and mushroom stew seems more dwarf-y to me than corned beef and cabbage.

King Babar said:
As someone who lives an hour away from the Alps, having dwarves raise cows doesn't seem particularly implausible to me. Cows and dairy products have a major economic and cultural significance in the alpine regions (see the wikipedia article on transhumance) and it would be odd for a mountain-dwelling people to not use perfectly good grazing land.

A good beef and mushroom stew seems more dwarf-y to me than corned beef and cabbage.
Click to expand...

But cattle in mountainous regions is a relatively new thing. Goats, sheep and the like, sure, but until modern grazing and feeding were available, not so much bovines. And again, if you are living underground, having above ground holdings would be less than optimal, possible, yes, plausible, maybe, but unlikely.

And it also depends on which part of the Alps you are in too, I spent three years in Bavaria so I am quite familiar with that section. At lower altitudes cattle were a thing, at higher altitudes, not so much. I can imagine in the lower Alps on the Italian side, absolutely, in the high Swiss Alps, not a lot of grazing land.

And if you want your Dwarves to be cattle barons and speak like the Rich Texan from the Simpson's, go ahead, I don't fun shame.
My point is, of you have xenophobic anti-social dwarves that live deep in massive mines, they aren't trading or herding cattle.

I grew up on Corned Beef. (edit: amongst other foods as well, obviously).

I'm not sure why it is associated with Dwarves in that book. I'm definately no Dwarf.

And...it seems I'm responding to this a year after it was written...oh well.

GreyLord said:
I grew up on Corned Beef. (edit: amongst other foods as well, obviously).

I'm not sure why it is associated with Dwarves in that book. I'm definately no Dwarf.

And...it seems I'm responding to this a year after it was written...oh well.
Click to expand...

modern corned beef is different than it was up till fairly recently years back. It used to be covered with big salt rocks that were corn kernel sized to preserve it.

tetrasodium said:
modern corned beef is different than it was up till fairly recently years back. It used to be covered with big salt rocks that were corn kernel sized to preserve it.

Dwarves might get associated with transportable beef without refrigeration & that was once corned beef
Click to expand...

'kern' and 'gran' or 'grain' all stem from the same PIE root word, so 'corn', the modern English version of the word, has the dual meaning of a 'grain' or 'kernel' of a substance, and as the edible seed of a staple crop (American use of the term 'corn' for maize originating in dropping the adjective 'Indian' from 'Indian corn' originally). So, corned salt is salt in the form of 'corns' or kernels of salt, and thus to 'corned beef'.

It does kind of seem logical that Dwarves would salt food. While salt mines aren't that commonly found in mountains, at least in the real world (being evaporites) it makes sense that the world's premiere miners would have access to it.