D&D 5E 2ThreadsMeet - What Norse-ish deities would you add to 5e... if copyright wasn't a thing?

Supporter
So, we have the list of deities in the back of the 5e PHB getting voted on over at: D&D 5E - 5E Survivor - Deities (Part 9: Norse Deities)

And a discussion of copyright over at: New Bill to Limit Copyright to 56 Years, Would be Retroactive

So, whether copyright has expired and your favorite character is freed up or there is just someone in IRL Norse mythology or religion who was left out, who do you add to the pantheon in the PhB if you control the game? 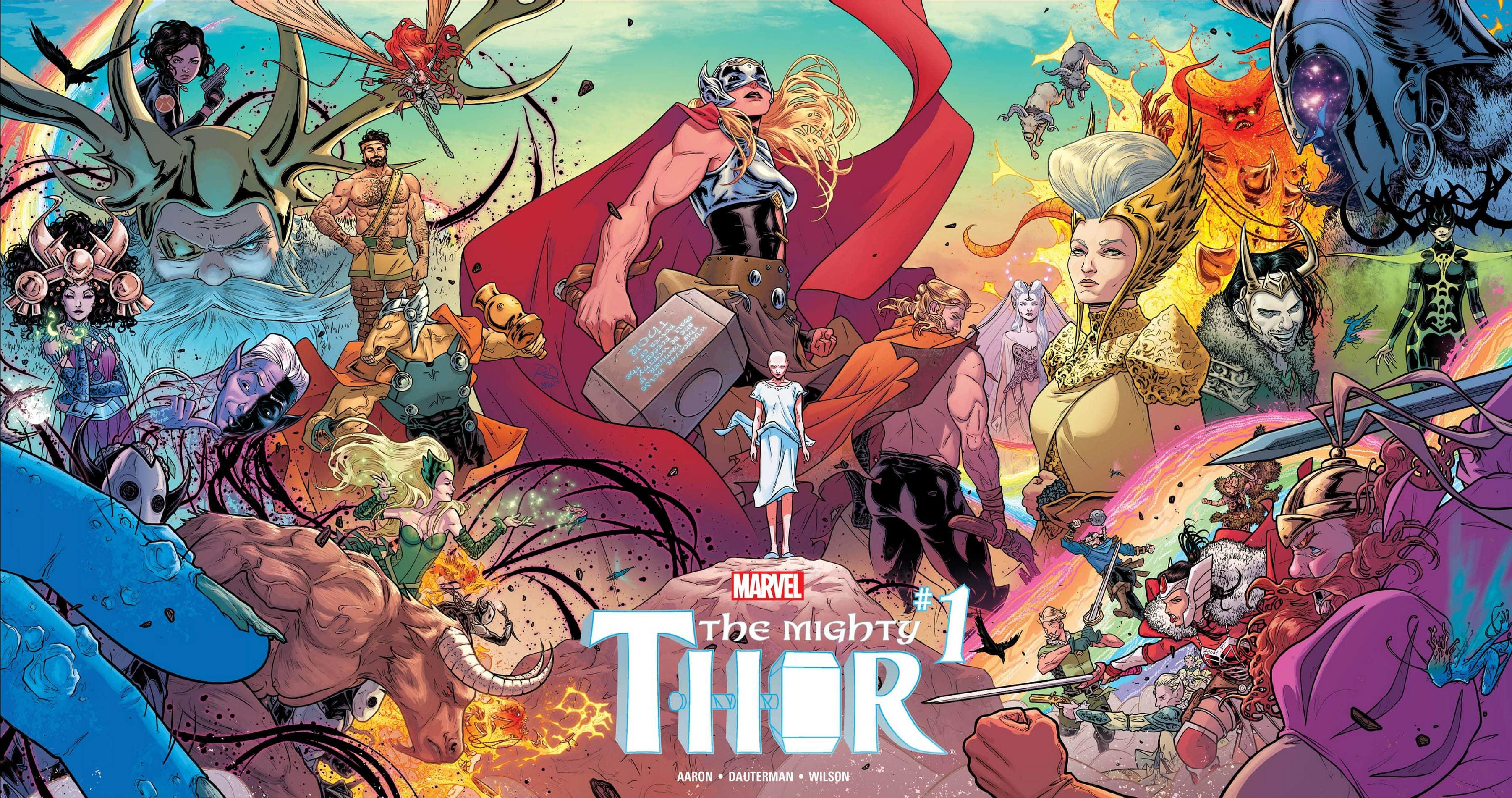 * No, Hercules doesn't count! But are there things in Riordan's Magnus Chase series? Things you hadn't read for awhile in Gaiman's recent book?
Last edited: Jun 8, 2022

Morrus said:
What Norse deities are copyrighted?
Click to expand...


Are the Warriors Three, Skurge and Amora all Marvel originals?
Beta Ray Bill and Throgg certainly are.
Is Karnilla?
Magnus Chase and his demi-god friends and some of their helpers?

So, maybe faux-Norse? But as Gaiman notes, "Things need not have happened to be true. Tales and dreams are the shadow-truths that will endure when mere facts are dust and ashes, and forgot."

Cadence said:
The Warriors Three, Skurge and Amora all marvel originals?
Beta Ray Bill and Throgg?
Magnus Chase and his demi-god friends and some of their helpers?
Click to expand... 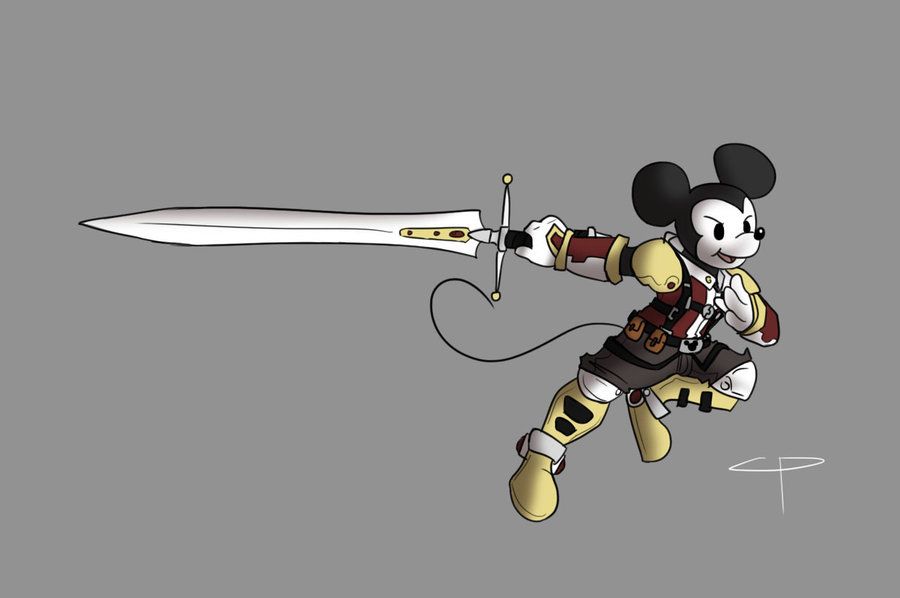 
Sure, but D&D does have a history of mixing things together. (Which other pantheons are shoved in with them on Gladsheim?)

Anyway, was imagining that a Paladin of Skurge who stood alone, a ranger of Beta-Ray Bill who was changed so he could lead his people safely through the wilderness, and a trio each worshipping a different member of the warrior three.

Might be more popular choices in game than, say, Forseti, Hermod, Odur, Skadi, or Uller.

And why should the Grung and Bullywug be denied Throgg? 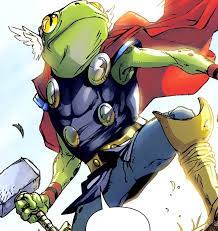 Cadence said:
Sure, but D&D does have a history of mixing things together.
Click to expand...

But in that case, the thread should be titled "What Marvel characters would you add to 5e if copyright wasn't a thing?"

I mean, Beta Ray Bill isn't even Norse-adjacent as far as I can see.

jayoungr said:
But in that case, the thread should be titled "What Marvel characters would you add to 5e if copyright wasn't a thing?"

I mean, Beta Ray Bill isn't even Norse-adjacent as far as I can see.
Click to expand...


He's worthy to pick up Thor's hammer and is currently the war leader for 616 Asgard.

And I'm guessing there have to be some others out in something...

The first post also opened it to any real myth Norse gods that aren't currently in the PhB too.

Well, in the spirit of "there but for copyright", I'll nominate the entire Discworld pantheon. A lot of them are rather Norse-ish, right down to the name of their abode, Dunmanifestin, which is simultaneously highly evocative of a Norse-style Hall of the Gods, and also an absolutely beautiful bit of wordplay.

These are animistic nature beings, not "gods" in the English sense of term. That said.


My favorite nature personas are:

• Baldr (daylight − and by extension knowledge, truth, and beauty)
• Freyr (sex − and by extension peace, agriculture, and wealth − also magic)
• Þórr (storm − and by extension, defense, oaths, honor)
• Loki (entanglement − I still cant decide if he is good or evil, but I feel he isnt neutral, as his antics have a longterm cosmic agenda)


I am kinda getting into:


Among the less wellknown nature beings, I love the primordial elementals:


I suppose Jǫrð (earth) qualifies as an earth elemental but she is conceptually unrelated to these three.


I love the jǫtnar, especially the cliff risar that are the personas of specific mountains. Known for beauty, strength, and magic. The modern Norwegian concept of troll ultimately derives from these, but it also mixes in the grotesque þursar. So, trolls who are enchantingly beautiful and who are scary ugly are both members of the same nuclear family. Note, even tho jǫtnar can manifest as big as a mountain, or even a continent, most jǫtnar are normal human size. There are stories where one sibling is human size and an other sibling is many meters tall.

I especially love the story of Barðr Snæfellsáss, the mind of a specific mountain in Norway who decided to project into the form of a mortal human, but then got homesick, and became the mind of a different mountain in Iceland.

When trying to translate the Norse concept into D&D, the personas are psionic minds of natural features in the material plane. The features of nature are a specific mountain, stream, weather pattern, etcetera. These normal aspects of nature have the elemental creature type but are native to the material plane. In D&D terms, they are psionically awake. Only some aspects of nature have a strong mind, and these material elementals mainly interact with humans psionically. A river flows because the elemental likes to flow and wants to flow. The elementals rarely do what they dont want to do, and are mostly just normal features of nature.

No reason you cannot use the mythological versions, Odin and Thor as neither Marvel, nor DC, invented them. Same goes for many other gods.

Rogerd1 said:
No reason you cannot use the mythological versions, Odin and Thor as neither Marvel, nor DC, invented them. Same goes for many other gods.
Click to expand...

Right. And they are already in the 5e PhB.

"So, whether copyright has expired and your favorite character is freed up or there is just someone in IRL Norse mythology or religion who was left out, who do you add to the pantheon in the PhB if you control the game?"

Cadence said:
Right. And they are already in the 5e PhB.

"So, whether copyright has expired and your favorite character is freed up or there is just someone in IRL Norse mythology or religion who was left out, who do you add to the pantheon in the PhB if you control the game?"
Click to expand...

If it was me, I would go a Midgard route, such that all the gods are masks, and that there are only a few gods. This would allow me to go Bifrost Guardians books- such that the gods that survive Ragnarok become the gods of modern Earth. 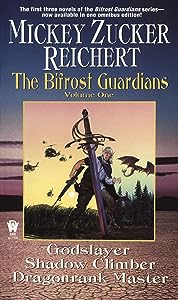 I liked the series. 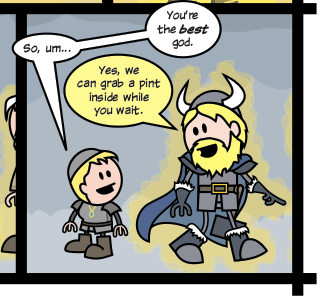 I already basically have Order of the Stick Northern Pantheon as one of my dwarven religious traditions and among the various versions of Norse gods in my homebrew.

Ymir whose corpse you live on
Elli - the Giant Crone who wrestles and defeats Thor
Vidar - with the giant boot, who cant talk except on the day of Ragnarok
Gefion - who gave birth to four giant bulls and plowed Zealand
Njodur - god of the sea (he survives Ragnarok)
Lofn - the goddess of small comforts and nice things

Tonguez said:
Vidar - with the giant boot, who cant talk except on the day of Ragnarok
Click to expand...

Heh, I still have no idea what is going on with Vidar − Víðarr.

Meanwhile, he is known for "silence" and persistence. Possibly relates to "wide" open space.

He has a single heavy foot, that can transfix the cosmic threat by Fenrir. And is the only one that can kill the wolf, Fenrir, thus save the world. In the sense of killing farm animals, the wolf often personifies wildness and destructiveness against order.

Viðarr is the offspring of Óðinn and Gríðr. Presumably, he embodies a concept relating to these two aspects of nature.

Mainly, Óðinn is not any particular skyey feature, but represents the orderly way that celestial and atmospheric cycle thru the seasons. In other words, he is a manifestation of the astronomical calendar. He is inherently invisible and only discerned indirectly from the behavior of the skyey phenomena that can be seen. Thus, Óðinn comes to be understood as the one who inspires the behavior of other nature beings. In this sense, he is a kind of muse, inspiring everything from magical trances to popular songs to cunning military strategies. The name "óð -inn", literally "the fury", relates to his aspect as a muse. In the sense of a muse, his persona semiotically functions as a "jarl", a kind of elected local president, a mayor that is the executive in chief of an army, who thusly leads his extended family the Æsir.

Some scholars identify Víðarr with empty space itself. Which associates with the astronomy and meteorology of Óðinn. Others identify him with the mystical center while meditating in trances. Which associates the inspiring muse aspect of Óðinn. Ive read one scholar suggest Víðarr is the aspect of a silent tree, such as in the vast forests of Sweden, where one might meditate to commune with the nature beings. Which emphasizes the single foot being the tree trunk of a quiet mighty tree.

Personally, I cant help but associate Víðarr with the "cosmic axis", the north pole that the stars revolve around. In other words, he is the planetary axis around which planet Earth rotates. This concept combines the idea that he manifests as a "spear", with a single foot, that transfixes "wide" cosmos. This aspect of nature is inherently invisible, "silent", but discernible indirectly from the skyey phenomena revolving around it. Likewise, this concept is the "offspring" of the astronomical aspect of Óðinn.

Víðarr is also the offspring of Gríðr. Unfortunately, the aspect that manifests her remains unclear. The etymology of her name is uncertain. Scholars typically mention the possibility that her name gríðr means gríð: "impulsiveness" or enthusiasm, relating to greed, violence, vehemence, eagerness. If so, this might relate to the "persistence" of Víðarr, to keep on going, avenging the futurely death of Óðinn and surviving the cataclysms of Ragnarǫk unscathed.

I'd be keen to have the warriors three as hero-deities. Demigods known to travel the 9 world's fighting evil and and righting wrongs, then having an almighty booze up.

Kelda was a badass goddess of storm and frost that I think would be a cool addition.

Another MCU god is Odin's older brother Cul, god of fear. He fed on the fear of mortals leading to Odin killing many of them to remove their memory if Cul and their fear of him. He also had a list of gods called his "worthy" which could be good additions for a darker side of the Norse pantheon.


cbwjm said:
Kelda was a badass goddess of storm and frost that I think would be a cool addition
Click to expand...

Thinking more about Kelda, her main story arc was finding love with a mortal and then losing him. Many gods in mythology had different areas that were in their "portfolio" so in her case, though she was eventually reunited with her mortal lover, she could also look after those souls who have lost their loved ones.

Expanding to Finnish? (But from the Swedish speaking part?)