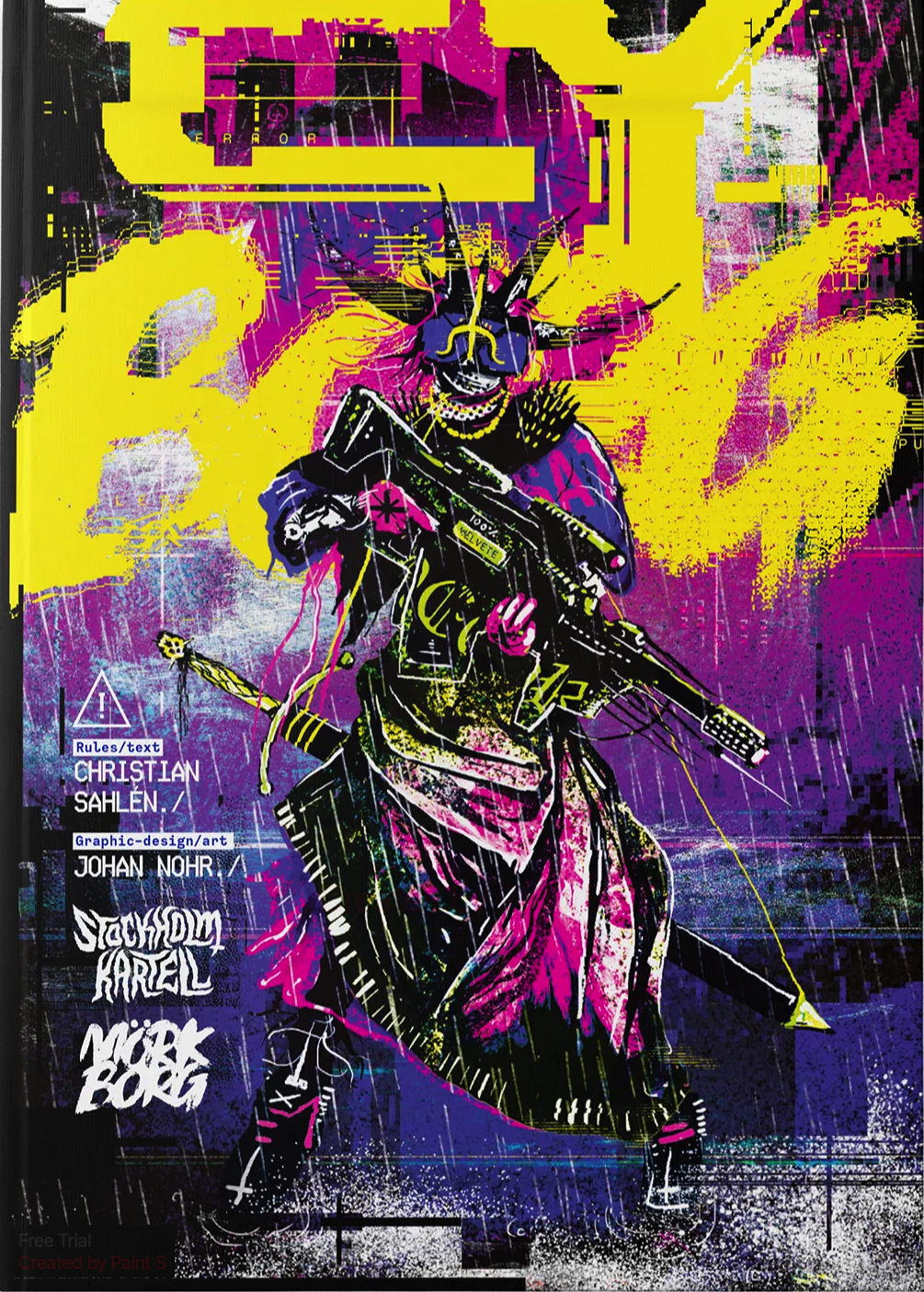 Most of the cyberpunk games on the market have the cyber part of the game well covered. There are books chock full of cool gadgets and futuristic weapons to equip characters. The punk side, on the other hand, can be a bit lacking. The central conceit of these games is usually players getting hired for black bag jobs by corporate interests with the occasional nod to the inequities of the system while players spend the money on cooler equipment. The design house Stockholm Kartel, most famous for MORK BORG, has turned their baleful eye to this genre with CY_BORG. Free League Publishing got an unexpected hit when they published that original bleak RPG, so I wasn’t surprised when they sent me a review copy of the house’s latest work. Does CY_BORG take down the Man? Let’s play to find out.

CY_BORG takes place in the city of CY which is going through several apocalyptic events ranging from climate disaster to an asteroid strike. The rich and the powerful don’t care, with their glittering towers and hallucinatory implants providing plenty of protection and distraction. The rest of humanity lives in the shadows of the city, scraping by in the rubble and the corpse riddled streets of the city. The city has been carved up by several powerful interests, all of whom deserve to be taken down with maximum prejudice. In case the punk spirit isn’t clear here, CY_BORG’s Rule Zero is the one rule you shouldn’t break: “Player characters cannot be loyal to or have sympathy for the corps, the cops or the capitalist system. They might find themselves reluctantly forced to do missions for them or their minions. But make no mistake-they are the enemy.”

The book takes advantage of Johan Nohr’s excellent design talents for a glitched out neon nightmare vision that’s just as striking as his work on MORK BORG. The book looks like it’s been optimized for viewing on a cracked screen covered in blood or some sort of industrial fluid. The book cleans up when talking about the high society of CY to remind you how clean the lives of the filthy rich are before driving the gulf between the have and have nots. My favorite elements are pop-ups that drive home some of the realities of this capitalist hell and a few occult hints that suggest that maybe the city is a literal hellscape.

CY_BORG follows the rules in its older sister game by featuring both classless and class based characters. The classes offer more hints about the setting, such as nanomancers who control millions of cell-sized machines that can essentially do magic. Everyone plays some sort of outcast, be it a canceled corporate killer or a hacker that uses old tech like discs and cassettes to take down creepy AI run by soulless corporations. This also shows one of the subtle differences between the two games. MORK BORG is a survival game full of characters trying to make sense of a world gone to hell by living as long as possible. CY_BORG characters seem destined to go out in a blaze of glory and the best they can hope to do is pull down one of the hundreds of towers with them.

The book ends with a sample gig that illustrates some of the unique elements of CY_BORG. Players are hired to knock over a local casino that’s been buying out neighboring residents to expand. The heist is structured as a bit of a dungeon crawl with some horror elements unexpectedly showing up in the descent to creep out the players. In the end, should they survive, the person who hired them does not show for the payoff, but the book includes several reasons why they didn’t on a chart to either wrap up the story or launch a new one. “Lucky Flight Takedown” could be used anywhere with a few adjustments.

Some tables might not be into short games or one shots but I think CY_BORG has utility for classic cyberpunk games too. There are dozens of charts, corporate logos and ideas in here for Game Masters to use. Even flipping through the artwork can inspire a tale that’s maybe a little more covered in spray paint than usual to bring across to another game.

CY_BORG is an excellent book that fans of MORK BORG will enjoy and cyberpunk GMS who want to dirty up their own games should pick up.
Click to expand...

I am looking forward to reading my copy. Maybe after Shadow of the Dragon Queen. The aesthetics alone should make for an enjoyable read.

That Rule Zero is a powerful set of words, one that reminds me of the Olivia Hill rule.

I absolutely love the game, and adding a little bit of cosmic horror to the Cyberpunk genre is always a plus in my book. I like that the system is player focused, i.e. your players make both attack and defense rolls, so it let's the GM focus on story and not rolling dice.

My favorite part of the book are the run generator tables...I can use these for my normal Cyberpunk game as well. Well crafted, interesting, and can come up with some pretty intriguing runs.

RPG Crowdfunding News - The Thief & the Necromancer, Graveyard of the Gods, PEACEMAKER, and more