Previously, Beadle & Grimm's has created luxury adaptations of the full-length D&D adventure books like their sets for Icewind Dale: Rime of the Frostmaiden and their Legendary Edition of Curse of Strahd. This time Beadle & Grimm's is tackling Van Richten's Guide to Ravenloft, which is both a setting book and a guide for how to create horror campaigns. If you think that means B&G has scaled back, you don't know Beadle & Grimm's. 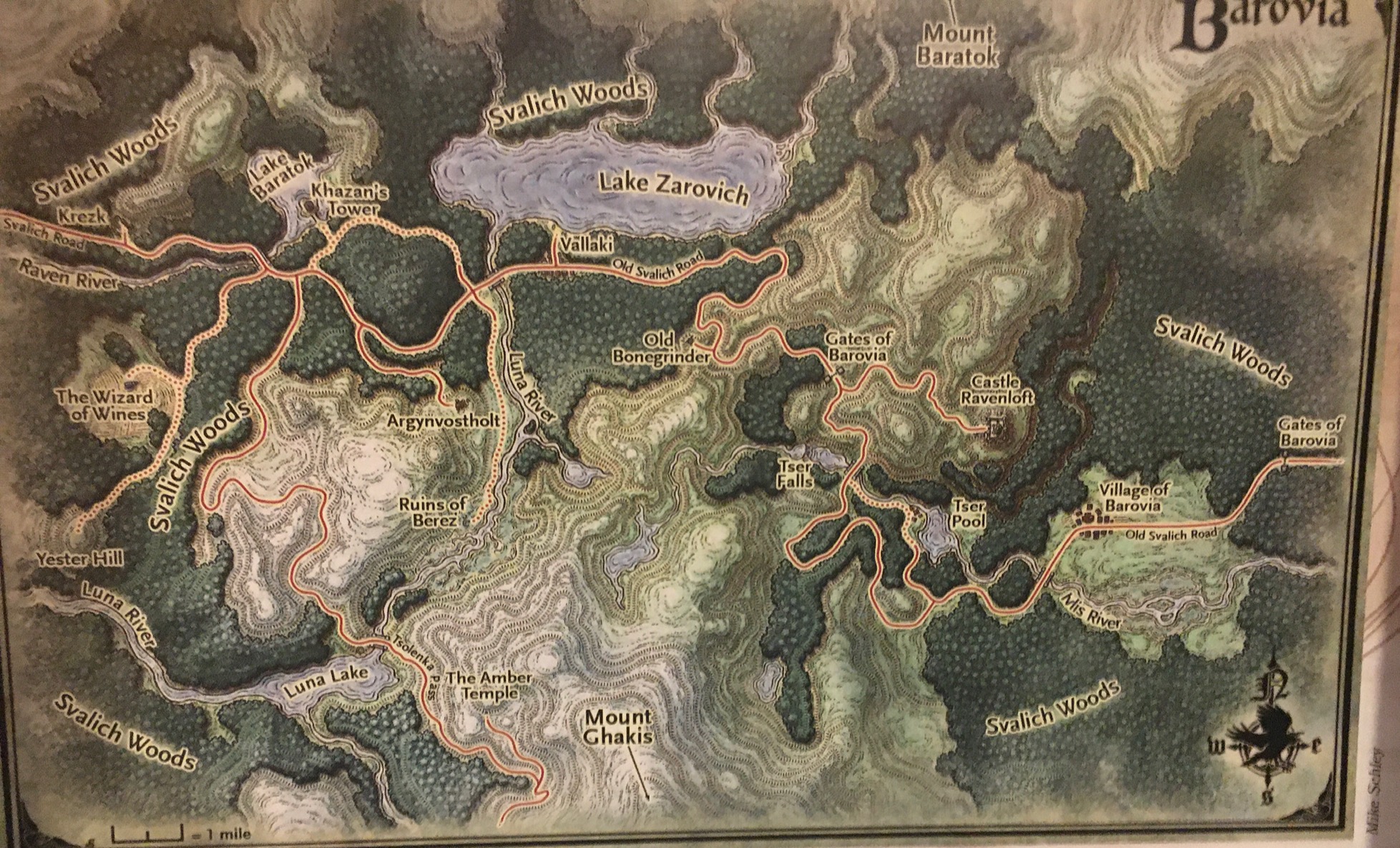 As my review of VRGtR indicated, Wizards of the Coast provided far more than basic information on the Gothic horror associated with Barovia, the best known part of Ravenloft. Instead, WotC covered wide aspects of running horror campaigns and lots of inspiration for creating adventures. Additionally, it refreshed the many, varied parts of the Domain of Dread as well as presenting brand-new ones.

As always, B&G's Shadowy Silver Edition of Van Richten's Guide to Ravenloft includes the original D&D book split into softcover segments that are easier to manage behind a DM's screen. That's even more useful here because it means you can let players thumb through the new character lineages in Chapter 1 while you're prepping a creepy encounter using the monsters from another segment. Beyond that is where the boxed set becomes fun, and B&G shows off its creativity and skill for creating a mood appropriate to whatever WotC has cooked up for its latest D&D book.

It starts with a choice of four different boxes. While the content is identical for all of them, the cover designs match one of the Marks of Horror (for the four main styles of horror out of the 10 covered in the book) – Eyeballs for body horror, tentacles for cosmic horror, Capra Aegagrus Hircus for folk horror, and rose and fangs for Gothic horror.

When you open the box the first thing you see is a raven feather token like those found in Barovia. Maybe it was a trick of the light but while it's actually printed on semi-translucent paper until I touched it I thought for a moment that it was an actual feather. 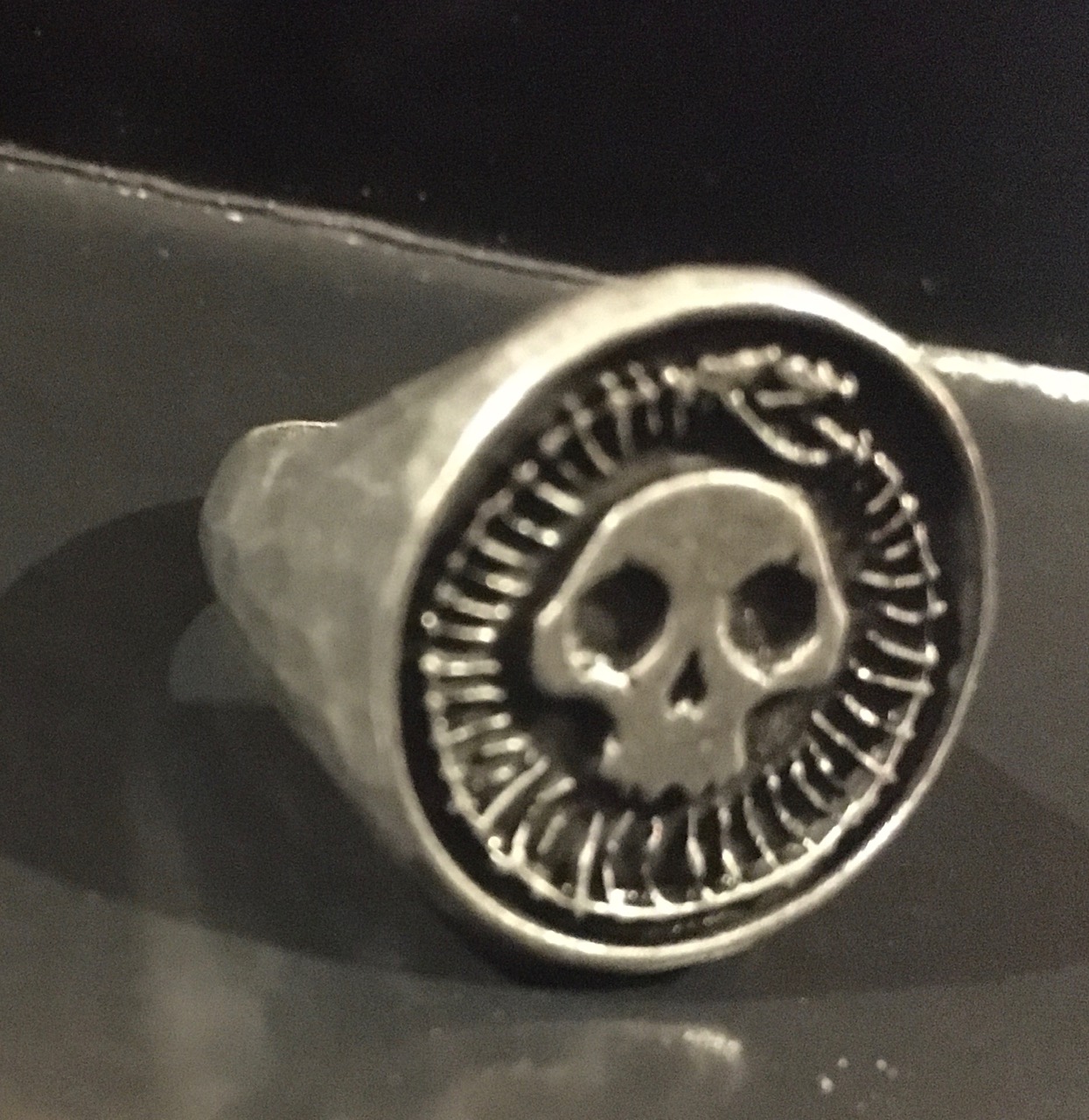 B&G is well known for the “artifacts” included in its sets – usually metal jewelry related to items in the adventure. This time you get three. With WotC's permission B&G changed the Amulet of Osybus from the short House of Lament adventure in VRGtR into the Ring of Osybus with a skull design and an adjustable band. 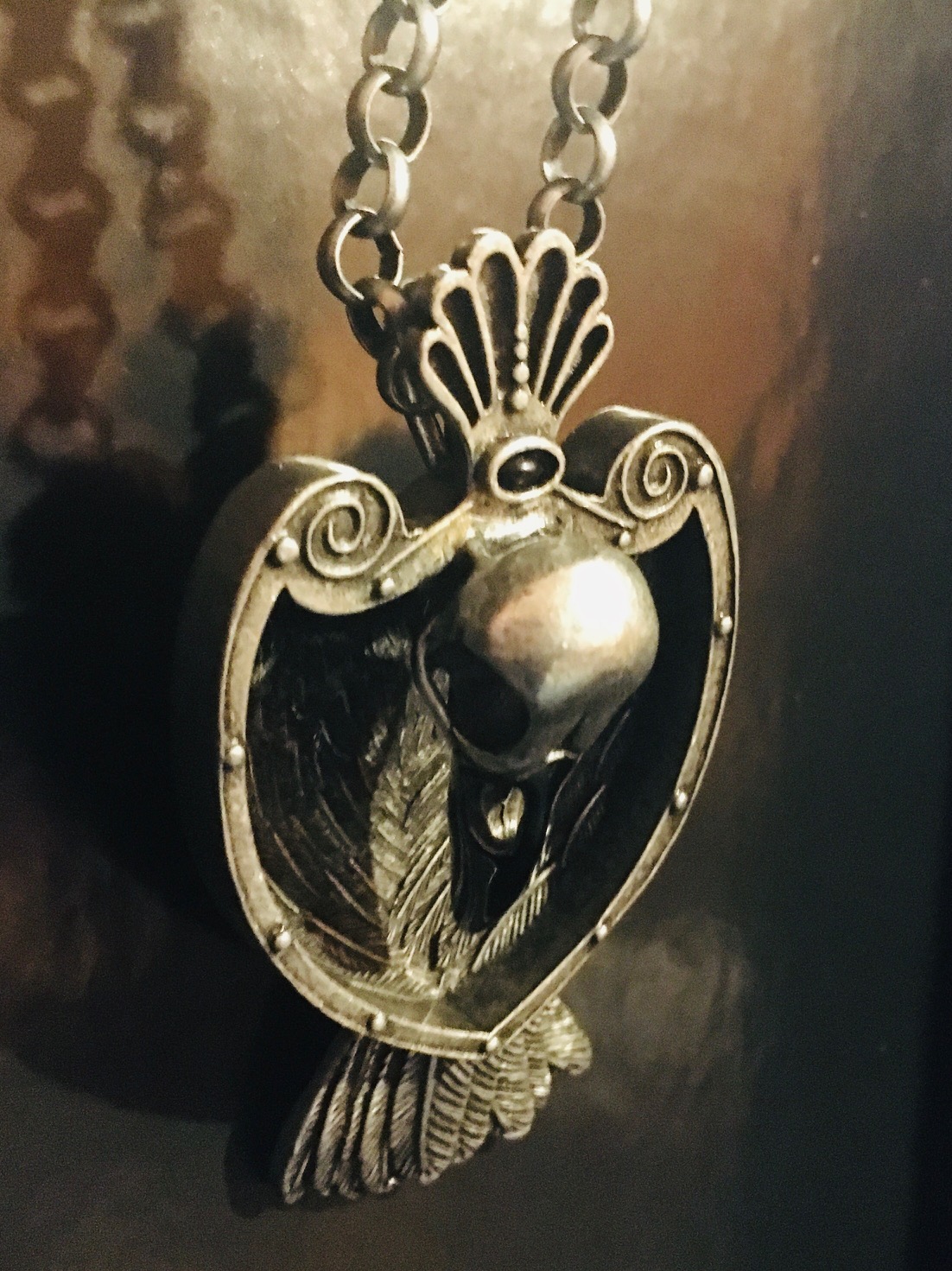 The Amulet of the Raven is has lovely details and a thick chain. The front features folded raven's wings. When you turn it over the ornate back has a replica raven's skull with a black glass beak in the recess. This is an original design made exclusively for B&G and can be used in game as a Mist Talisman. 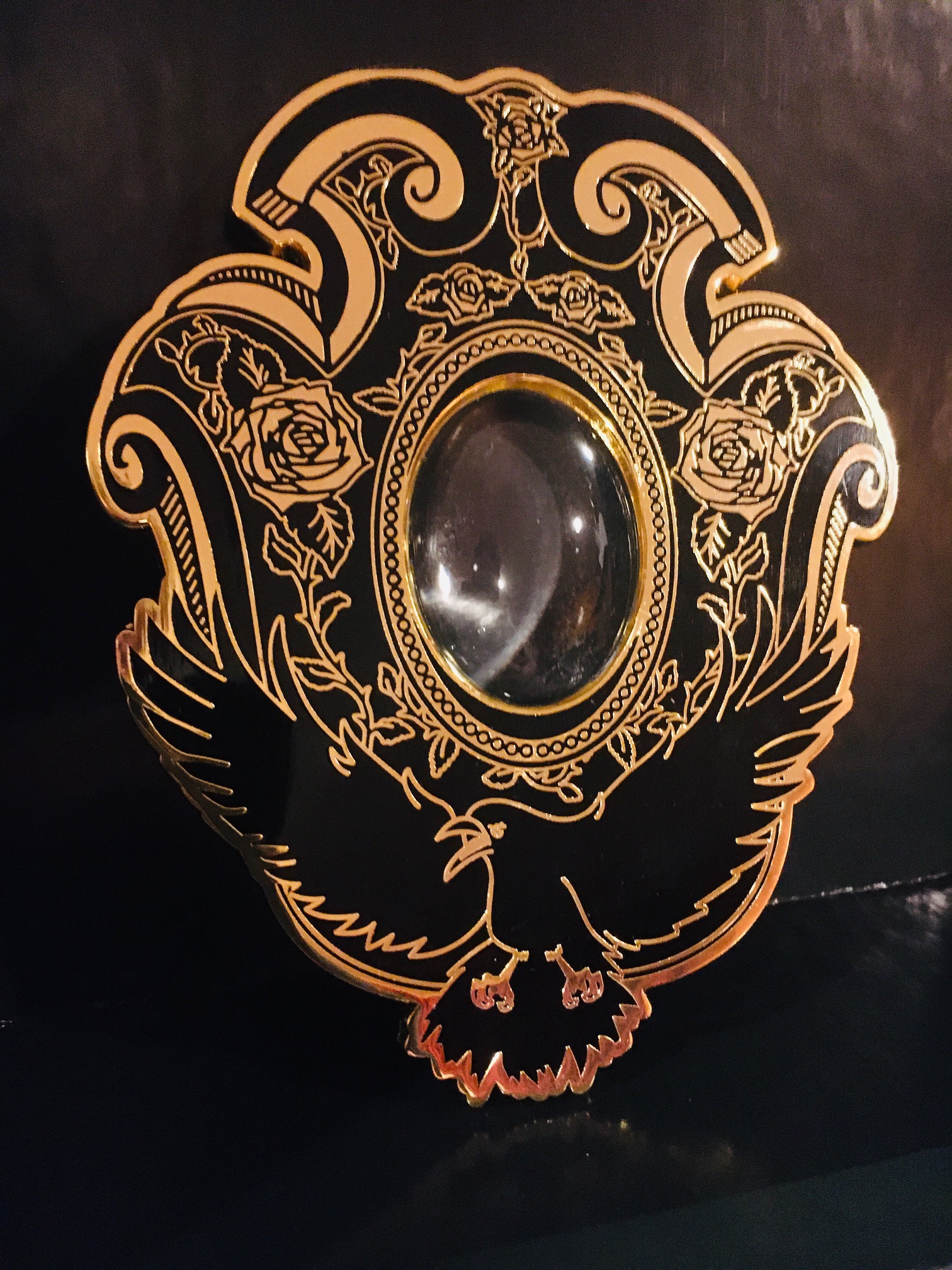 But the most stunning piece is the planchette. Heavy with a polished inset crystal on gold-tone with black enamel in the shape of a raven. It's designed to be used with the spirit board in House of Lament.

The in-world handouts are always fun, and it's no different now. They include a deed, last will and testament, a note, death certificate, etc., some rolled and tied with twine. The supply ledger for one of the bonus encounters is even crinkled to make it more realistic. The set also includes wine bottle labels for that extra touch. 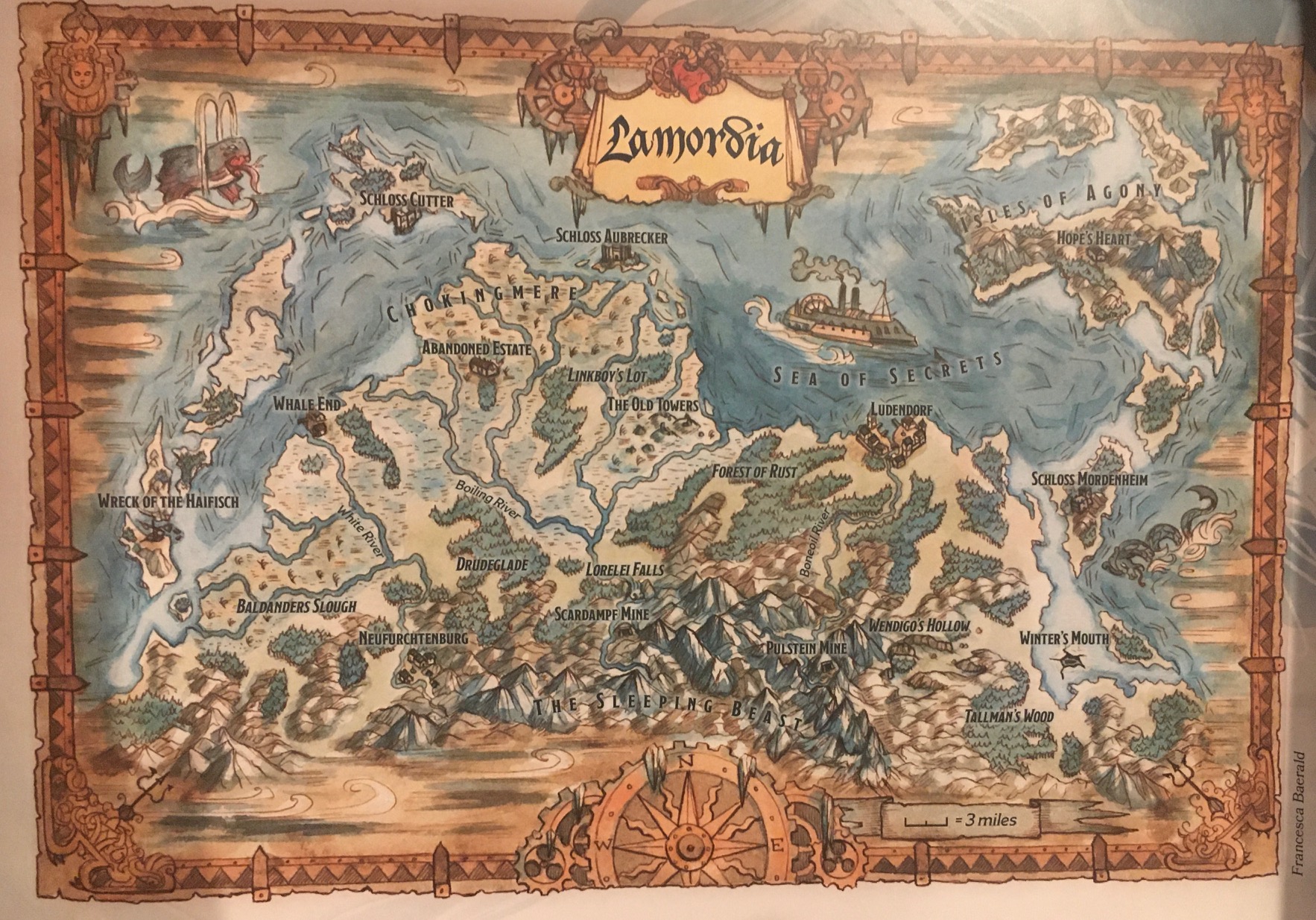 VRGtR focuses on the various domains within Ravenloft, the Domain of Dread. B&G provide handout-sized maps of those featured in chapter 3 for easy access and player reference. Additionally, you get two battle maps to go with encounters in Falkovnia and Har'Akir, plus maps to go with the House of Lament adventure.

If, as a DM, you're still getting a feel for Ravenloft – or planning a larger Ravenloft adventure, B&G makes sure you have more than just the House of Lament adventure to get you started or keep your players busy while you're creating something original. The four bonus encounters can be played individually or strung together into a short adventure that takes players from 4th to 8th level (House of Lament takes players from 1st through at least 3rd level).
All four adventures capture the spirits of their respective domains well. Combine B&G's original material with WotC's guidance on setting a tone and running horror as described in VRGtR, and you'll have a deliciously creepy time.

To go with the new adventures, B&G provides five pre-gen characters so your group can start playing faster. Four out of those five feature character options directly tied to VRGtR. One character each utilizes the new lineages for the hexblood (as a druid), dhampir (as a rogue), and reborn (as a barbarian), plus a human pre-gen that uses the new warlock option, Pact of the Undead. The last pre-gen is a human death domain cleric.

In addition to all of the above, B&G also provides an abundance of art. Six pieces are original art by Claudio Pozas and Shen Fei. Two pieces of the art are new and original for the House of Lament adventure, and the other four go with the original B&B adventures.

Additionally the boxed set comes with 40 encounter cards. Most feature creatures from chapter 5 of VRGtR with the rest coming from the original adventures, like Bright Eyes, the vampire spawn from Assault on Granary 13. On the flip side of the encounter cards' art is the stats for the given creature, all designed to easily drape over a DM screen. The set also includes 52 pieces of art handouts from the book.

Beadle & Grimm's has been incredibly consistent and maintained a high level of quality in all three sets I've examined so far. In addition to that, the B&G team puts great thought into their adaptations from the finger puppets in the Legendary Edition of Curse of Strahd to handouts and planchette in this one.

If Shadowy Silver Edition of Van Richten's Guide to Ravenloft fits your budget or your group is willing to chip in to buy it, the boxed set is well worth it for Ravenloft lovers. If you also own B&G's LEoCoS, combining the two will be an abundance of horror goodies you can use to entertain your players.

Man those adventures sound really good. It's very frustrating that these boxes are "All or nothing" as far as I can see. I'd love to buy those adventures, even print versions, but I definitely don't want to buy a $185 box (the ring and other materials are largely not useful to me).

Maybe I'll send them an email and beg to buy those adventures, otherwise it looks like I'll never see them .

Urriak Uruk said:
Man those adventures sound really good. It's very frustrating that these boxes are "All or nothing" as far as I can see. I'd love to buy those adventures, even print versions, but I definitely don't want to buy a $185 box (the ring and other materials are largely not useful to me).

Maybe I'll send them an email and beg to buy those adventures, otherwise it looks like I'll never see them .
Click to expand...

Their website is now mentioning that they offer the option of "ShopPay" where you can pay installments.

Weiley31 said:
Their website is now mentioning that they offer the option of "ShopPay" where you can pay installments.
Click to expand...


Well, $185 broken up into four payments is still $185... to be clear I can technically afford the box, I just can't justify the full price as I only want the adventures (I already own the book, and the remainder of the material is largely stuff I won't use or can make myself).

The adventures are really the only part I do want to use, so it's sad I can't buy them alone.

I really wish they had done a Tomb of Annihilation Platinum Edition. I really like the Rime of the Frost Maiden Platinum edition.

Yenrak said:
I really wish they had done a Tomb of Annihilation Platinum Edition. I really like the Rime of the Frost Maiden Platinum edition.
Click to expand...

They did a box set for Ravenloft long after it was published. They may do this one yet.

darjr said:
They did a box set for Ravenloft long after it was published. They may do this one yet.
Click to expand...

Yes. I’m really hoping they do. It would work so well. Unfortunately, it will probably come out too late for me since the party I’m DMing just arrived in Chult.

Wednesday at 4:38 AM
MonsterEnvy
M
B
Beadle & Grimm's Platinum Edition of The Wild Beyond the Witchlight