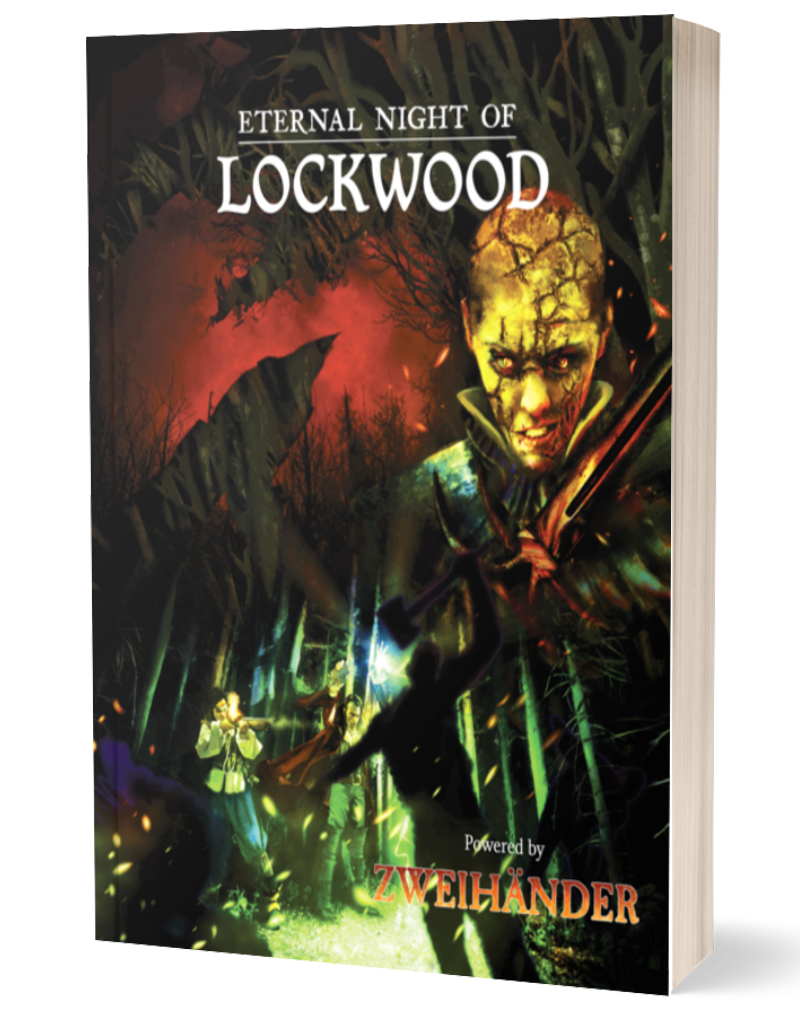 Despite their reputations as unprofitable, I think that adventure books are vital to game lines. The best ones show how the designers expect their game to be played while also offering tools for the Game Master that can be used when they are up against the clock. Even if the GM isn’t interested in running the full campaign, they can use bits and pieces for their own stories, whether it's a monster, an NPC or even a whole episode. Eternal Night of Lockwood, written by James Introcaso, offers a glimpse into what to do with the massive ZWEIHANDER RPG. Andrews McMeel sent a review copy and I’ve finally returned from the 384 page volume. What did I find in the Eternal Night? Let’s play to find out.

Eternal Night of Lockwood is a campaign setting that kicks off with a supernatural mystery. A few days before the action begins, night falls on the land of Lockwood and the city of Ertol. A strange magical field also surrounds the area, trapping the players and the townsfolk inside. It’s a pretty solid hook for the characters: if you want to leave, figure out what’s going on. The ten episode campaign will lead characters through all the tiers of the game, plus there are another two dozen or so adventure hooks to spread throughout to taste. The storyline is a fairly straightforward tale of a secret villain trying to raise their evil god back into power.

I liked the structure of each adventure. There’s a summary at the top that offers suggestions to adjust each adventure for the different tiers of play. There are also content guidelines and alternate suggestions for plot points, such as changing a dog into a person for any players who don’t want to deal with harm coming to innocent animals. Each scene has bullet points at the top that describe elements for each of the five senses and bullet pointed character information guides that can be read as boxed text or woven through a more role-playing intensive conversation. Top it off with great line art from Zweihander workshorse Dejan Mandic and the presentation of each adventure is crisp and clean

The main strength of the campaign is flexibility. In theory, the adventures in the campaign can be run in any order. There are a variety of stories. They are mostly investigation but there are a few straight up monster hints. My favorite drops the players in the middle of a class struggle between the rich folks in town and a burgeoning labor union. The adventures also offer multiple pathways through the story. There’s coverage for folks talking their way through as well as fighting their way through.The encounters and scenes are structured so that failure doesn’t stop the narrative. The characters will still suffer consequences, such as damage,important people in town becoming unfriendly or worst of all Corruption.

The story’s handling of Corruption is one of the biggest departures from Zweihammer’s forerunner Warhammer Fantasy Role-Play. WHFRP tends to assume the PCs are self-serving jerks looking out for themselves. The path of Corruption in Eternal Night of Lockwood is viable but it follows the most selfish, brutal path. It runs all the way to the end of the campaign where the players might decide to ally themselves with the dark god, but up until that point, there’s a bigger assumption the players will be good guys or at least anti-heroes.

There are two ways the GM can drive the campaign as written: a poem handed out piece by piece after each adventure and a magic staff that collects bits of the True Name of the main bad guy that the players can use to weaken the demon in the final struggle. These bits are where I felt the book stumbled a little bit. If one of the strengths of the campaign is modularity, why not give out the whole poem and let the players knock down the scenes in their own order? The staff offers a way out of a big battle at the end, but it sometimes felt getting the runes was like an old point-and-click adventure to find them during each story. I know it was done to encourage players to explore the confines of Lockwood but some stories integrated the idea better than others.

Eternal Night of Lockwood remains an excellent example of a Zweihander campaign. It also offers a good story to tell with whatever dark fantasy RPG you might like, such as Andrews McMeel’s sister game Blackbirds, The Witcher, Symbaroum and more.

If you enjoyed this review, please click on the links to purchase it to help support your friendly game reviewer.
Click to expand...

I’m playing in this game with now and am enjoying it! I had to not read the entire review for fear of spoilers but I can say I’m enjoying it a lot

I too am playing this right now. It's been a total blast.

Vildara said:
I too am playing this right now. It's been a total blast.
Click to expand...

Wait I know you.