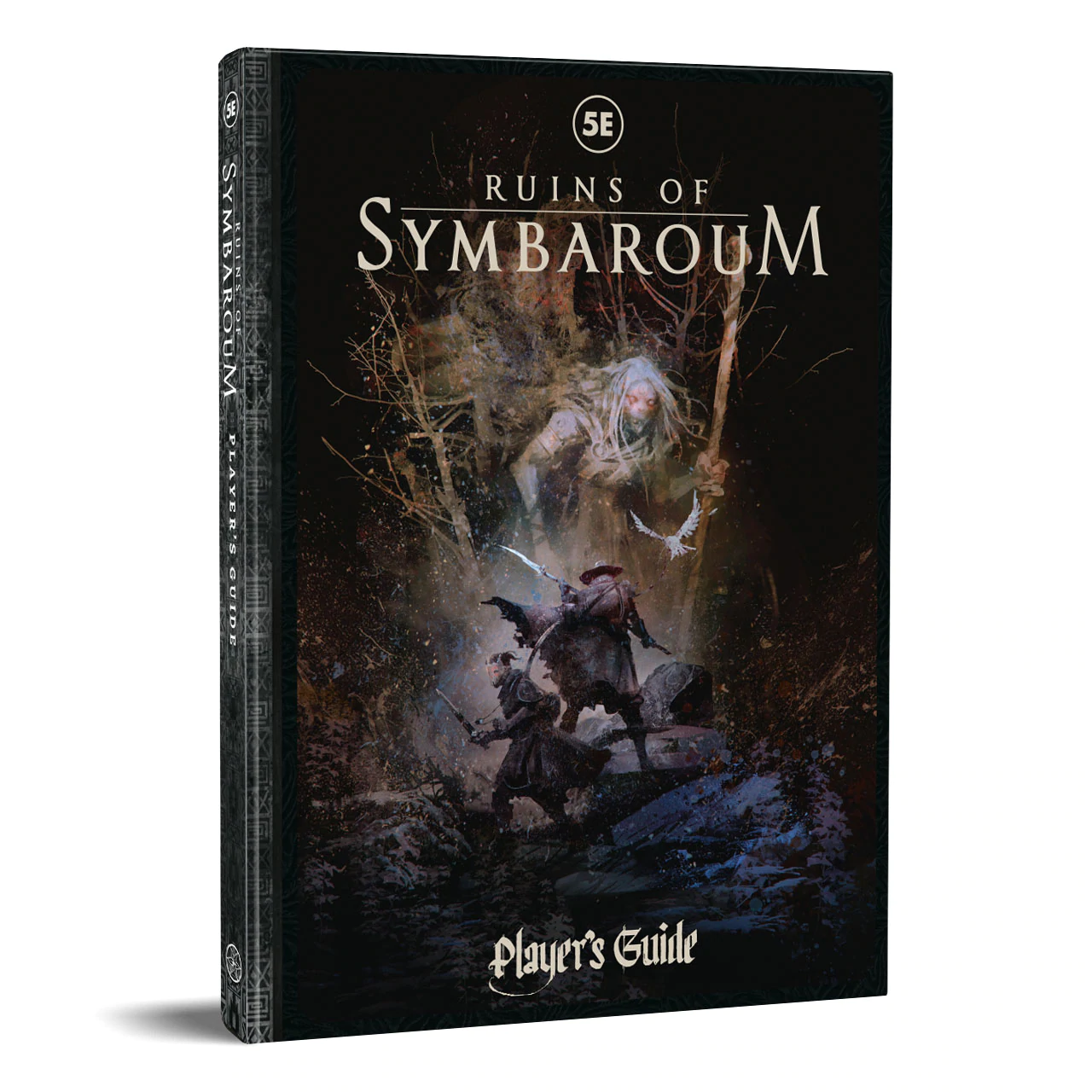 The popularity of Dungeons & Dragons Fifth Edition is obvious. Many publishers are doing their best to try and take advantage. So far, most publishers have avoided the pitfalls of the Third Edition era in making a play for that 5e customer dollar.. Some of my first design work was on Swashbuckling Adventures for 7th Sea and converting my design work to satisfy the dual stat mandate was the least favorite part of that job. Instead, most publishers are releasing distinct books full of 5e conversions. Free League Publishing recently made a decision to release a set of books for their Symbaroum setting and sent along the fruits of its labor for me to review. Does Ruins of Symbaroum keep the creepy flavor or does it become a dungeon crawl by another name? Let’s play to find out.

Symbaroum is a Swedish dark fantasy setting that’s been around since 2014. The title refers to an ancient empire that was swallowed up by a dark forest hundreds of years before the time of the game. The human empire currently in power, the Ambrians, found a victory over a dark army at a cost: they’ve been forced to move closer to the Davokar where the ruins of Symbaroum lie. That’s caused people to enter the forbidden area looking for treasure, ways to restore the Abrians to their proper power or even bring back Symbaroum to its former glory. The move has put humans suddenly shoulder to shoulder with other cultures and awakened monsters long left sleeping and forgotten.

The setting is more inline with things like Game of Thrones and The Witcher. The latter certainly informs the gorgeous art used in these books. Plunging into a dark forest seems like the kind of thing Geralt would do, with the game highlighting fighting against the darkness and holding back from the fall of civilizations. Tables that want a game that feels like their favorite version of The Witcher without worrying about clanging off of storylines or canon will find a lot to like here.

The Player’s Guide introduces most of the big mechanical overhauls into Fifth Edition. Rather than adapting Symbaroum to D&D, it goes the other way. The die system introduces four levels of success. If someone rolls 5 over or 5 under the DC, they will kick that success or failure up a notch. The classes reflect the ones in the original game, with archetype style approaches giving focus to the broad classes of Captain, Hunter, Mystic, Scoundrel and Warrior. While most of these are self-contained, the mystic includes spell lists featuring options from the Player’s Handbook and ones adapted for this book from the original game. The standout elements are the origin options which offer some meaty backgrounds for use in this setting or in a homebrew with features that go beyond the usual.

More rules naturally come in the Gamemaster's Guide. This book details the central home base setting of Thistle Hold, introduces some random ruin generators and general advice on how to run the setting. One advantage this book has over the original line is how many of these rules were scattered across many books. Many of them really help to set apart Symbaroum from classic D&D fantasy. Ceremonies, for example, are ritual castings that can be done by multiple mystics for powerful effects while everyone else sleeps. There’s also a set of travel rules that offers an excellent balance of risk and reward going into the forest. Finally, the book ends with “Blight Night” a fun intro adventure featuring a siege of a lonely inn on the edge of the forest by some goblins that’s not only a tense night of adventure but draws players into the larger storylines of the setting.

The Bestiary rounds out the trio of books. This is where the lush, dark artwork really works to the game’s advantage. Most monster manuals are a question of either quantity or quality and Ruins of Symbaroum goes for the latter. In addition to the art, each entry features multiple entries, tips for modification, background on the creature and an adventure hook for each of the big monsters. There’s also tactical discussion which often goes sorely undiscussed in other books of this type. If that’s not enough, there’s a quick conversion guide in the back for monsters from the original game.

Ruins of Symbaroum is an excellent reflection of what makes the setting a dark fantasy delight. I hope it opens up this world to tables who only enjoy 5e or convinces fans of the original to give it a go in a different system.
Click to expand...

Will anytime Free League publish a 5th Ed of Mutant Year Zero (and spin-off)? I would worry if I was WotC wanted to publish a new edition of Gamma World.

At least they have not announced anything in that direction. Apart from Ruins of Symbaroum/Symbaroum 5e, they have only mentioned doing a new iteration of Adventures in Middle Earth. And both of those titles are not using their house engine.

Of course, that is not going to happen, at least in a near time, but who knows? Maybe some day in the future we could find suprises like this. Other possibility is to revamp a previous line to be this more easy to be adapted to 5Ed.

In your opinion, what options are good to port over from this to regular 5E?

LuisCarlos17f said:
Will anytime Free League publish a 5th Ed of Mutant Year Zero (and spin-off)? I would worry if I was WotC wanted to publish a new edition of Gamma World.
Click to expand...

Not sure why they would. The MYZ game system is far better equipped than 5e for running survival style games, which is what MYZ is. Symbaroum was always kind of a one-off RPG with its own system, but well known for its amazing artwork and adventures.

The MYZ engine is used in almost all Free League games such as MYZ, Aliens, Twilight 2000, Forbidden Lands, and soon Blade Runner. It sells very well, so I don't think they'd be looking at 5e for much, if anything, beyond Symbaroum.

I got a bunch of Symbaroum, I believe in a bundle of holding deal, as the general dark forest themes appeal to me as did Free League's rep for quality. But I have not really cracked them open as D&D is my system of choice. 5e versions may get me to look them over more.

Weiley31 said:
In your opinion, what options are good to port over from this to regular 5E?
Click to expand...

I'd say the ceremonies is the main thing that comes to mind. I did not find it that portable tbh, as most changes are really tailored to the setting. It's not unlike AiME, in a way; a deep adaptation of the 5e ruleset.

Where can I get these books? They're not on Amazon.

GrayLinnorm said:
Where can I get these books? They're not on Amazon.
Click to expand...

As far as I know, Free League are still distributing to backers. But you can pre-order at symbaroum.com if you want.

A Tome of Heroes Review