A Tale of the Hyborian Age 
Of the Hyborian Age

The campaign is played using Mongoose's excellent Conan Roleplaying Game, Second Edition, which is based on the 3.5 edition of Dungeons & Dragons. The two games are similar but vastly different in many areas. If you desire to play a game set in Conan's universe but cannot use Mongoose's out of print game system, then look HERE for other Hyborian Age conversions.

No humanoids were killed during the production of this campaign.

[sblock=Map of the Hyborian Age (large)]

Conan walked the earth over ten thousand years ago. The world was different then as Europe, Asia, and Africa still comprised one large land mass.

Over generations, howling northern barbarians migrated south, settling the rich, fertil lands west-central of the Known World. Great kingdoms they founded there--kingdoms that became the most powerful, advanced examples of civiliation. These barbarians worshipped the god Bori, and thus this massive ethnic population of people were known as Hyborians.


This lost period of history is known as the Hyborian Age.

[sblock=Map of the Hyborian Age and the Modern Age (large)]


[sblock=Map of the Thurian Age (The Time of Kull, Before The Sinking of Atlantis (large)]

Caelis stood knee deep in the bog. He paused from the work to shade his eyes and take a sip from his water hide. The cold snow-melt felt good going down his throat. Hard shadows fell from the setting sun. The great bright ball had grown so large in the sky that it seemed as if it would momentarily touch the peaks and set them a-flame. At least that’s what Caelis used to think when he was younger. Today, Caelis knew that the two would never meet. The light would disappear somewhere behind those peaks. Work would cease. The morrow would begin in the dark, just as the world itself had grown out of blackness.

This commencement of the new day was foremost in the child's thoughts because, when the sun completely disappeared, he will have seen 12 winters and finally be allowed to prove himself at the test. The young Cimmerian knew that his life was about to change.

Glancing to the east, Caelis could see his home, the village of Seven Stones Ridge—the clanholme of the Urrogh. In his native tongue, that translated as the Blue Fox Clan. Smoke lifted into the air there, and Caelis knew his father would firing the forge in his own effort to finish the day’s work.

The round-houses and other thatched wooden structures in the distance sat atop a plateau that jutted from the foothills at the base of the Eiglophian mountain range. From the village, there was a long distance view out across the Hoath Plain. A younger Caelis had walked to the lip of the ridge and tried with all his might to pierce the distance and spot the Field of Chiefs. He felt silly when his brother told him the Field was too far south to see even for those among them with the keenest eyes.

Another sip from his water hide turned the inside of his cheek cold. He drank as the brother of his father had shown him, in small sips, not to conserve the water but to ensure he didn’t bloat himself while there was still work to be done. Caelis shifted the water from one side of his mouth to the other, washing it over his tongue, warming his refreshment before he swallowed. As he did so, his head turned and eyes trailed in a full circle around his position. Ean had also told him to remain aware and prepared for that which lurks out of sight. “Urrogh are always ready, always aware.” Caelis remembered Ean's words. A warrior is reeze, like the blue fox, conscious in all directions.

The highlands dominated Caelis' visage to the north. East and west, he sighted trees of thick pine, crone and beech. This is a rich land, Caelis knew. Fresh water flowed freely from the Eiglophians. Mountain goats, sheep, hogs, and sometimes even wild cattle fed on the abundant scrub in the foothills. The forest hid moose and boar, deer and rabbit, and squirrel—plenty of pickings for the clan hunters, trappers and gatherers who kept the village food cellar full and the skinner, butcher, and tanner busy. Even the soil was rich with the run-off from the highlands. The Foxmen were not known for their farming, yet steady helpings of vegetables always seemed to find themselves on Caelis' wooden plate.

The sacred blue foxes were drawn to this place. They dug their catacomb burrows into the ridges and foothills in all directions. This mountain may not be Crom’s mountain, Caelis thought. Nay, Ben Morgh stood to the east, a solitary peak—not part of any mountain range but its own, the highest in all Cimmeria. But, the Eiglophians did shed many blessings upon the Blue Fox clansmen. The boy believed, as did all of the Urrogh, that Crom laid his favor here. For, it was on this very spot that the god had given the Secret of Steel to man. During that dark, forgotten age of the past, the god Dagda sent Seven Titans to confront Crom for his deed. Crom slew all seven in one mighty battle that scarred the land and created this plateau. It had all happened right here! Upon the very dirt and mud that caked onto Caelis' bare feet! Crom, the greatest of all gods, destroyed the Titans here, then left to face Dagda and usurp his throne.

The Urrogh were typically tall and strong and hardy by even Cimmerian standards. Caelis knew, as did all the villagers, that the blood of the Titans soaked into this land and combined with the water in the wells and the soil from which the vegetables are grown. This was one of Crom’s gifts. Their god gave them strength of arm and the will to defeat their enemies. Then, the Lord of the Mound tested the measure of his gift every year with the long, harsh Cimmerian winters.

Caelis stoppered his water-hide then pulled a nasty looking curved metal tool from the rope he used for his waist belt. He thrust his hand into the muddy water, closing his fingers around as much water-weed as he could grasp, then pulled with all his might. Mud collected in the thick weeds forming little floating islands that anchored themselves to the bottom the bog by their dense roots. Caelis shouldered the bog patty out of the water, using his tool to cut it clean from its anchors. A few of the roots were thicker than the rest, and Caelis had to use the bog knife’s serrated edge to saw them apart. With the patty successfully up-ended, the boy pointed the tip of the knife into the cluster of weed, root, and mud, until he found a small black pellet the size of his fingernail on his smallest finger. This, he dropped into the wide mouthed leathern sack that hung from his rope belt. He found three more pellets, then sloshed his way to the next patty, looking for more.

A fork of the Diamondrun river ends in a large waterfall just west of the village. The run-off is always freezing cold or frozen over, depending on the time of year. Snowmelt at the peaks of the Eiglophians feeds the Diamondrun, and the pool at the waterfall’s base is alive with salmon, Cimmerian minnow, and White Cloud whitefish. But, besides the change in the villagers’ diet, the waters of the Diamondrun bring another prized commodity. Minerals from the mountain wash down in the river, collecting in the mud and grasses of the bog that borders the waterfall pond. The dense root system on a patty acts as a filter that catches minerals flowing through the water. The ore collected is not quality and cannot be used for weapons. Iron made from this source is brittle. But, the bog ore is sufficient for Caelis' father to make nails and buckles, candle holders or iron drinking cups, fire pans and door hinges, and like materials.

Caelis looked around and saw his brothers, and some of the older village children--even some of the young women, wading around in the muck, looking for bog ore pellets, just as he did. Here, in the heart of Cimmeria, life was hard. Everybody worked. Everybody contributed to the survival of the clan. In a few short hours, though, Caelis knew that he would start a path down a road that would allow him to contribute in a different manner.

Thus begins the tale the Blind Bards speak of as Cimmerian Blood. 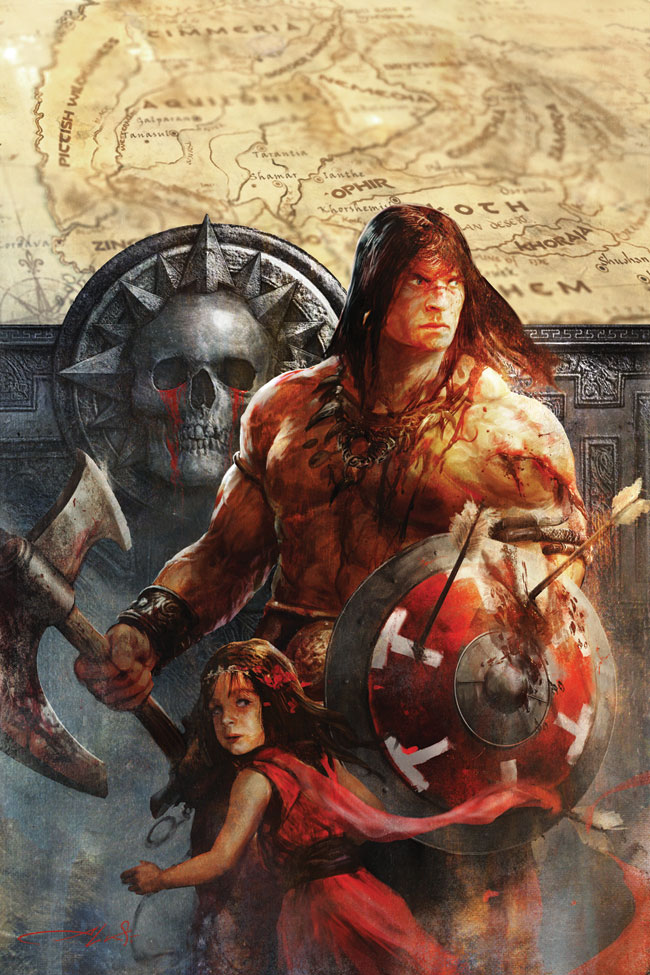 Path of the Warrior

The Urrogh recognize a day coming to its end when the work is finished, at sundown, allowing the next day to begin, just as the world began, in blackness.

Cimmerians are not strict record keepers. The months follow the cycles of the moon. When a Foxman can see the new moon, he knows he's reached another month.

The Clan recognizes the year as divided into four parts, based on the farming, gathering, raiding, and hunting cycles. Each of these seasons begins with a festival, held on the nearest moon, new or full, depending on the festival, season, and time of year.

Smaller, minor festivals are held on the ninth day of the third, sixth, or ninth month.

The largest festival of the year marks the first days of summer, which all long for in this cold, unforgiving realm. The clanholme swells to several times its normal size during these three days as outlying homesteaders from all over the Foxlands come to partake in the festivities.

This is a time of partnerships and fertility. Political alliances and marriages are declared. Animals are transferred from winter to summer pastures, in between being driven through the Beltain Fires to cleanse them of evil spirits.

On the first day of the Beltain, the entire clan ages as one. The age of every Foxman is measured by the number of Beltains he's seen.

As entertaining as this is, perhaps it belongs in the Story Hour forum?

Greenfield said:
As entertaining as this is, perhaps it belongs in the Story Hour forum?
Click to expand...


I don't think so. As it says above, as I add to it, a GM will be able to use this thread to run a Hyborian Age campaign or single adventure, if he wants.

It's a write up of my game, but I'm going to put it up in such a way that a GM can use the thread as a sourcebook.

For example, the "Bog Miner" post above can be used as a handout, setting the stage, for a new campaign.

The post I wrote above called "Path of the Warrior" isn't finished. My time is limited. When I'm done, I'll add in info about the Ras Croi and what it takes to become a warrior among the Blue Fox clan.