An actual Chick tract was left on my door

As the title says, I found an honest to Lathander Chick Tract on my door today! Well, a small one, "inviting" me to send away for more. 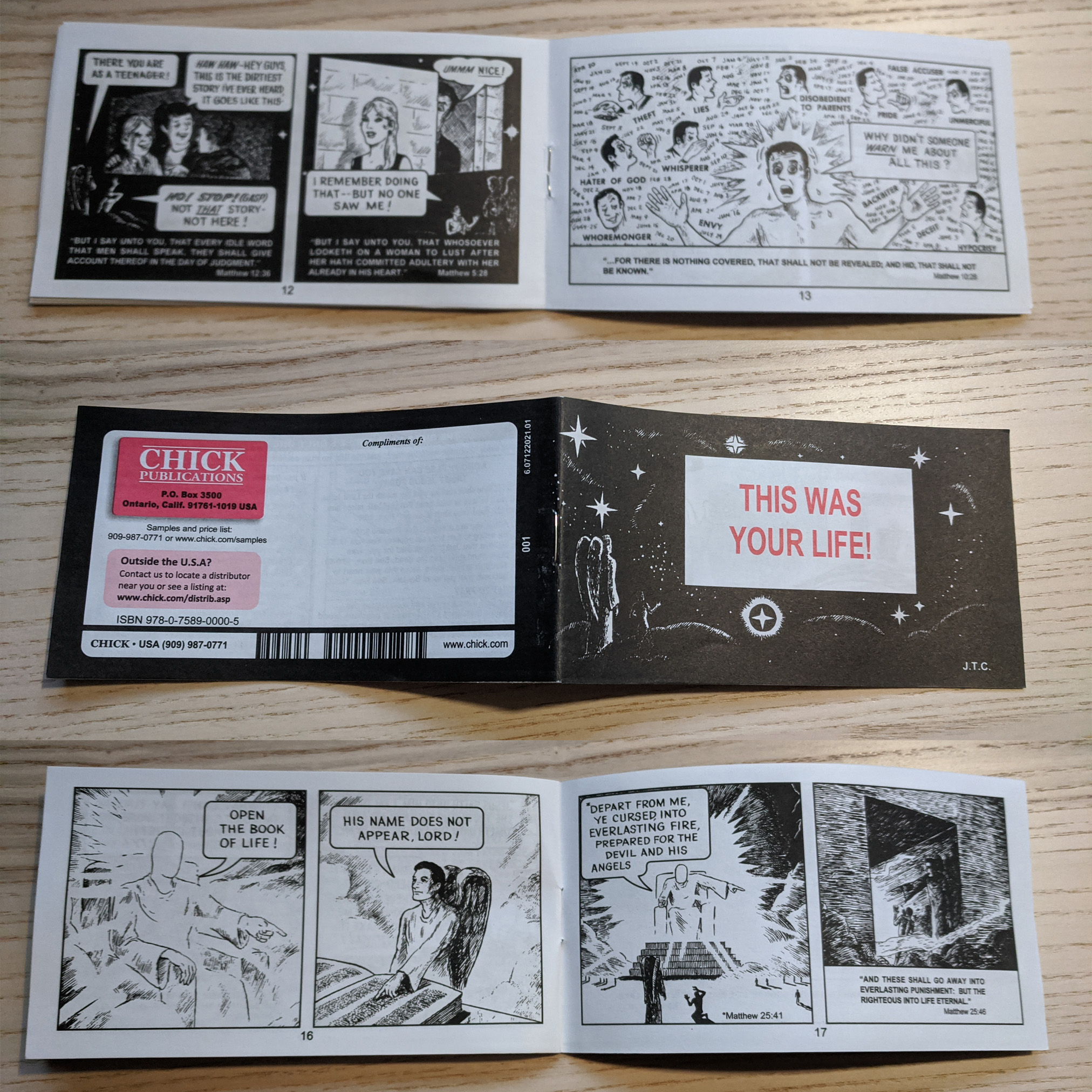 Strangely, despite the magnitude it had (and still does) in stoking Satanic Panic and of its anti-gaming impact (even if it is unintentionally hilarious for how melodramatic it is), I'm more intrigued and amused than anything else. Having lived through that era but never having seen one in the wild, in a weird way it's like touching a part of gaming history...

It's been a long, long time since I've seen a Chick tract in the wild.

MGibster said:
It's been a long, long time since I've seen a Chick tract in the wild.
Click to expand...

... When I was sending a student to the office for pushing religious tracts on other students in school. Student got some form of discipline... but I don't know exactly what. They were not returned to class...

MGibster said:
It's been a long, long time since I've seen a Chick tract in the wild.
Click to expand...

This thread inspired me to take a trip down memory lane and read Dark Dungeons again. I can't help but feel an uncomfortable parallel between what happened to Marcie and how some people responded to players facing emotional turmoil over their characters dying at the end of the Deaths in RPGs thread.

Wow, I'm hoping that whoever gave them to you was only thinking about how you'd appreciate that bit of nostalgia. If not...

Staff member
I haven’t seen a Chick tract since the original satanic panic.

I sometimes wonder what the people who take those seriously think about those of us who view them as targets for amusement and historical curiosity.

Someone used to leave these laying around the student lounge in high school. No-one ever admitted it, probably because of all the loud mocking and laughter... but they also kept leaving them for a while. I don't think I've seen one in the real world since then. Just discussions of them on places like here.

The one that sticks with me. Woman doesn't know why her aunt seems less sad and lonely. Then there's a knock on the door. Aunt opens, and woman goes "Oh oh.... they're Mormons."

Other than that, I remember titles but few specifics. "Bad Bob." "The Death Cookie." "The Visitors." And of course, Dark Dungeons, which a friend of mine "reviewed" for a zine back in the day. "Why does Alex Trebek want by to burn all my D&D books?"

Since those days, I've discovered idiots are everywhere, and it takes too much energy to hate them individually. So I just hate them... generally.

Leaving these around in secret shame, in high school. That’s rather sad.

Hmm, I have never seen one of these outside the internets.


We are, alas, not the center of the Universe. We are not even the center of Jack Chick's universe (or, the universe of the publishing company that survives him). Their website offers 271 tracts, so we are like 0.4% of their universe.

Kannik said:
Strangely, despite the magnitude it had (and still does) in stoking Satanic Panic and of its anti-gaming impact (even if it is unintentionally hilarious for how melodramatic it is), I'm more intrigued and amused than anything else. Having lived through that era but never having seen one in the wild, in a weird way it's like touching a part of gaming history...
Click to expand...

The last time I saw a Jack Chick tract in the wild was ... oof ... I want to say 20 years ago? Maybe 15? I was walking to a MLB stadium, and someone was passing them out. Even then, it was kind of surprising.

I'm more careful about what I think is amusing than I used to be.

When JW or Mormons come around I just use my HeroQuest doors to block them.

I can't find a good link, but George Carlin had a great bit about never having seen "a Gideon", but if you called the front desk at your hotel and said there wasn't a Gideon's Bible in your room, they would have to send a Gideon up to bring you one.

I was way too nice to the JWs who - chatting with me at the front door - started offering their pamphlets about child endangerment and child abuse when they heard kids playing in my house. I about lost it, but that's not how I roll.

I recall a lot of Chick tracts floating around when I was growing up. I grew up in a very Catholic town, so I'm not sure who they were aimed at.

Dark Dungeons is an absolute masterpiece of hyperbole and completely failing to understand things.

Is Jack Chick still around? I have a collection of these from 20+ years ago when I used to eat at a little hole in the wall Korean joint that was near a project. They had a box near the register full of them and I would rummage out a new one every now and then.

Staff member
Mod note:
Folks, while we may poke some fun at Chick's tracts, commentary about various religious groups is not where this thread is going to go. Please stop. Thanks.

dragoner said:
Is Jack Chick still around?
Click to expand...


He passed away in October 2016. There's still Chick Publishing that puts out the tracts.