D&D General Behold a final, and perhaps definitive, graph of D&D vs. AD&D sales over time! From Ben Riggs.

Is there a total sum listed?

Well, one of major takeaways is that separating the game lines was always a bad idea, on addition to being nuts on the face of it.

jolt said:
This is purely anecdotal, but in my area, all the local libraries carried the B/X boxed sets for at least a few years. None of them ever carried AD&D. Potentially, that's a lot of additional exposure outside of hobby/game stores. I never bought a 1E PHB, MM, or DMG during the 80's because my older brother had them and he left them at home when he went away to college. It's only been in the last few years that I've gone back and bought the original 3 books. I learned about D&D from my brother. If he hadn't played I likely wouldn't have known about it until it showed up at the library (our K-8 school was right across the street so trips to the library were a weekly occurrence). It's also where I stumbled across the Fighting Fantasy gamebooks. The only real advertisement for (A)D&D (at least in the US) was in magazines like 'The Dragon', but the only people who knew about 'The Dragon' were usually the (A)D&D players.

Also, when parents bought the game for their kids, it was most likely to be the B/X game as that showed up in the bigger box stores every now and then while Advanced never did that I saw. For me, the 80's had more competition for my time than the 90's did. In the early 80's, Top Secret got more play time than either B/X or Advanced. In the 90's though, there was less competition for D&D than there was in the 80's. In the early part of the decade (when I was in college) the only real competition was Call of Cthulhu and a little GURP's. As a result, I bought tons of D&D 2E stuff, even though I liked it less, because far fewer games caught my eye.

It's different now with the Internet and everyone having access to everything but it sure wasn't like that in the 80's and even for most of the 90's. For example, I never even saw a single Chaosium product until I went away to college; they were just never stocked in my area. The same for FGU. You couldn't buy what wasn't available.

Sales numbers are interesting but they don't always mean much. Also, it's not an "either or" situation. Heck, I know people who bought both B/X and Advanced and never played either. They felt that B/X was too "kiddified" but bounced hard off Gygax's writing style and wargame-isms in Advanced. Conversely, you had people who bought both and used both; keeping the stuff they liked, ignoring the rest, and making stuff up as they went. That kind of freeform play seems less common now (to me anyway) but was very common back then - even in "official" tournaments and the RPGA.

I had a quite different experience, perhaps because my D&D days started in California. The local library had the AD&D books "on card", but they were always checked out (and had been so for months...). Our local mall toy store (Toyland, later bought by Kaybee) had both the Holmes set and the AD&D line. I actually got my AD&D books from Toys'R'Us, my Greyhawk set and the DL modules from Waldenbooks/Bookland (which also carried CoC, BTW), and my Companion/Master set as well as Star Frontiers from Kaybee's toys. In the bay area at least, the game was pretty much everywhere that sold books.

As far as advertisement went, the comics I read usually had full-page D&D ads, done like a comic strip. Then there was the short-lived D&D cartoon.

When I moved to Mississippi, in '86, it took me a couple years to find any D&D books - the local mall bookstore carried some modules and I finally lucked into finding a FLGS that carried the whole line. Also, it wasn't until I moved that I discovered Dragon magazine even existed.

I self-taught myself D&D, though I did get some help when older classmates found out I was DMing - they even game me copies of Shrine of the Kuo-Toa & Vault of the Drow (the old monocolor covers). Those were the first AD&D items I owned, and from there I was coaxed to putting aside B/X to learn and run AD&D, the "real adult's game".

I think it is pretty clear the various Basic sets were gifts far more often than AD&D. Parents and weird aunts probably account for half of all Basic sales.

Back in the late 70's, we really didn't see a difference, basic was like the starter set. I only bought the expert book, because I wanted the adventure it was bundled with, Isle of Dread.

dragoner said:
Back in the late 70's, we really didn't see a difference, basic was like the starter set. I only bought the expert book, because I wanted the adventure it was bundled with, Isle of Dread.
Click to expand...

Basic was an on ramp for us too but at the same time we did see them as separate.
Last edited: Aug 3, 2022

darjr said:
Basic was an on ramp for is too but at the same time we did see them as separate.
Click to expand...

I had Holmes, which said to go buy the PHB etc., I only saw the basic that acted like it was different, as well as expert, later. Nevertheless we treated the game as modular, and only added the rules we wanted. Not that it bothers me either way, it is great people like B/X and consider it its own game.

Reynard said:
I think it is pretty clear the various Basic sets were gifts far more often than AD&D. Parents and weird aunts probably account for half of all Basic sales.
Click to expand...


Add to that, people that picked it up out of curiosity and just didn't "get it", and some adolescent edgelords that ended up disappointed that it wasn't actually a tutorial on how to be a mini Aleister Crowley.

M.T. Black put this chart together.


Nice chart! I used the raw numbers to put together a cumulative chart: 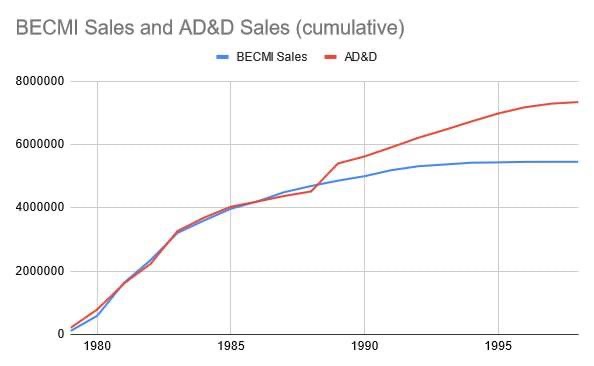