Campaigns in a nutshell. Adventures in a sentence.

Dannyalcatraz said:
Actually no! It was a cartoon strip. 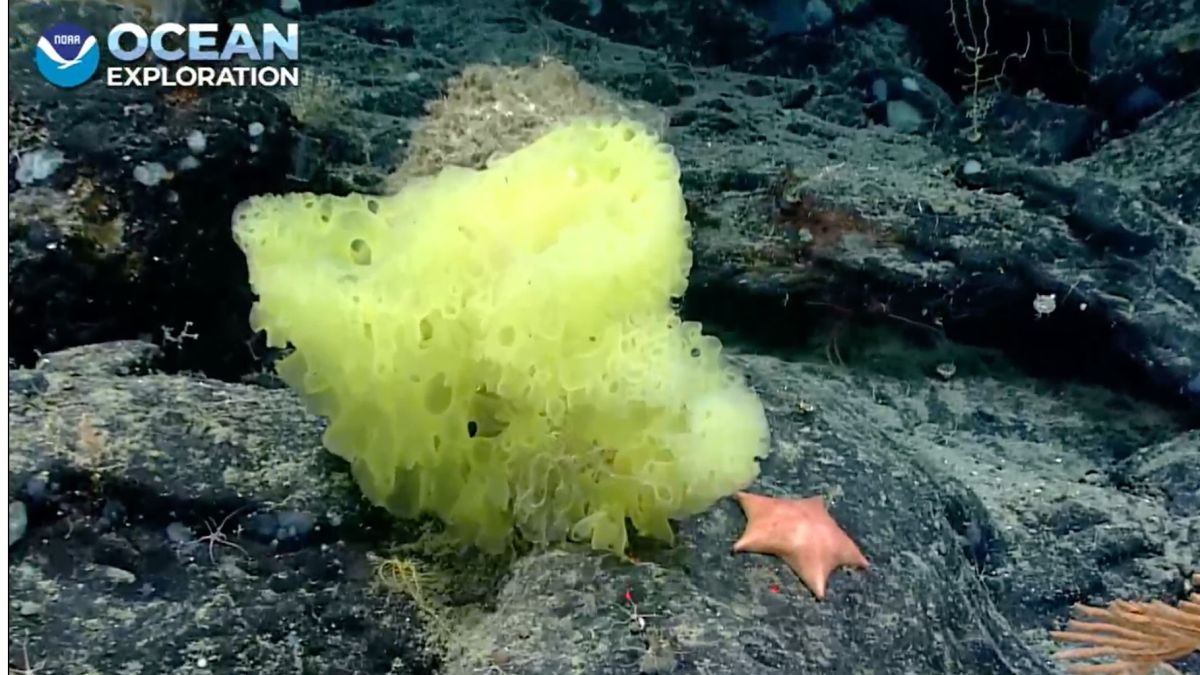 Real-life SpongeBob and Patrick found side by side on seafloor. But they likely don't get along.

Real-life SpongeBob and Patrick found side by side on seafloor. But they likely don't get along.

I just saw that a couple days ago!

Here's a shortened version of a one-page "campaign pitch" I gave for a Star Wars campaign waaaaaay back in/around the late 80's:
"Luke could feel the force as he flew along the Death Star Trench, quickly approaching the exhaust pipe. He closed his eyes, squeezed the trigger...and missed".

It almost won in the "what game/campaign do we want to play next" choice (can't remember what it lost out to...at that time, probably 1e AD&D or Warhammer 1e).

Returning to the tangent about Spongebob, I just found this video entitled "Spongebob and Patrick Conjure Demons With Human Sacrifice":

A pirate's treasure map ends up leading only to to a bunch of buried bodies. Eventually it turns out that the pirate captain buried his crew alive because the real treasure was friendship.

Bohandas said:
A pirate's treasure map ends up leading only to to a bunch of buried bodies. Eventually it turns out that the pirate captain buried his crew alive because the real treasure was friendship.
Click to expand...

The townsfolk's request for the PCs to deatroy the temple of the evil cult is a trap. When the PCs get there it is deserted except for a bell tower, whose occupant rings the bell to call out the townsfolk - actually all members of the cult and not as harmless as they appeared - to come out and attack the PCs who were lured there to be sacrifices

Staff member
That has kind of a Dagon feel to it.

Kaiju Fhthagn
Call of Cthulhu adventure wherein a cthulhu cult is led by a child based heavily on Toshio from Daikaiju Gamera, and Icho from Yongary: Monster From the Deep

Dreamland Pulp
Higher powered Call of Cthulhu campaign where the PCs are all half-gods from Celephais (cf. The Dream-Quest of Unknown Kadath)

Tremble
Dungeons & Dragons or Call of Cthulhu campaign based on Quake, reusing maps, plot elements, etc
High Tech
Another Call of Cthulhu idea. This one's set in classical antiquity or earlier. But the Nyarlathotep cult that's trying to take over has been given weapons equivalent* to 19th century firearms by their god. They've also been given plans for renaissance tech weapons which they are developing the means to manufacture themselves

Champions of Nodens
Relatively high powered Call of Cthulhu campaign where over the course of the campaign all of the player characters lose their right hands during confrontations with cultists of Nyarlathotep, and have them replaced by unusual things. They eventually realize, after cross-refrencing various tomes against a passage from the Necronomicon, that they are being used by the one handed god Nodens as pawns in his rivalry with Nyarlathotep. Inspired by The Dream Quest of Unknown Kadath, Evil Dead 2 & 3 and Hellboy (edit: and Adventure Time)
Last edited: May 14, 2022

No Java
I have this half-formed idea, it would probably work best in Toon, about the adventurers having to revive King Arthur with the perfect cup of coffee after realizing that that's all that's needed to bring him back when they see that the word "AVALON" reflected in a mirror is "NO JAVA"

Not really sure how this 16+ year old thread eluded me all this time, but I can add my campaigns to the list.

Order vs. Chaos
500 years ago, the last king of the land decided that he'd had enough with demihumans - orcs, goblins, kobolds, et al. With fervent public support, he raised a vast army of paladins and clerics and eradicated them. Along the way, he tried to enlist every tool of order at his disposal - attempting to gather the pieces of the ultimate "Rod of Law" along the way (the Rod of Seven Parts). Unfortunately for the king, he had some powerful detractors who realized that all that he was actually doing was just enacting genocide on races of people who didn't deserve it. They decided to kidnap his daughter, the Princess in order to convince him to stop his foolish campaign. The king retaliated against these nobles, and had them killed. Unfortunately, they were the only ones who knew where the daughter was (frozen in temporal stasis, and stuffed in a bag of holding). Because she existed outside of time and place. no magic could find her. The King and Queen spent the remainder of their years trying to find her to no avail, and each in their own ways.

Today, along come the PCs, investigating some ancient ruins - shrines that once honored those who fought in these long ago conflicts, where they eventually discover the first piece of the Rod of Seven Parts. Along the way, they eventually learn that the Queen became the Queen of the Hags, and rules over the entire forest, driven mad by the loss of her daughter, and paying a price for pacts she made with evil fey forces long ago. The King became a vampire, and now is driven by evil and hunger, and lurks in the shadows in a land far away. The PCs are driven to complete the rod, but along the way come to realize that ultimate order is no better than ultimate chaos. Also, they discover the actual princess, secreted away in a dark cave, who only complicates the history of the world, and helps them to see that the King's past is not as rosy as the books say.

The Best Intentions
An ancient Mind Flayer decides that science progresses far too slowly. In an effort to help mankind along the march of science, he reasons that the real problem is something called "ethics". In an act of infinite benevolence, the Mind Flayer replaces all the most esteemed scientists in the world with Intellect Devourers, and tells them to continue their science "unabated". As expected - all hell breaks loose. Now, all the world's most prominent alchemists are free to test their creations on an unwilling populace. The need for "test subjects" grows exponentially as the alchemists have free reign to hasten their testing. One alchemist even creates an "alchemical plague" and unleashes it on a very large populace. The plague isn't healed by traditional magic, and lowers strength by 1 point per day, until they go into a coma. At this point, priests, disguised as Priests of Kelemvor, offer to "remove" the "dead" from the city, where they are promptly cured with an antidote, and thrown into slavery in a far-off land over the sea. Here, they are given over as test subjects in brutal, and often bizarre experiments.

Also, the Mind Flayer has learned that one of the scientists has been experimenting with the Apparatus (from Ravenloft, and the Book of Artifacts) - a sinister device that can transfer the intellect of one creature into the physical body of the other. He's decided that he wants to recreate a much larger version of this device around a Tarrasque that he's found trapped in an earthen prison near a jungle. If he manages to pull this off, the party will have to deal with a Tarrasque with the intellect of a mind flayer!

der_kluge said:
Not really sure how this 16+ year old thread eluded me all this time,
Click to expand...


And see also the related threads Worlds In A Word, Planes In A Paragraph and Supreme Beings In A Summary, Deities in A Dispatch

A group of strangers meet near the train’s caboose, summoned by invitations from a renowned but eccentric and reclusive scholar of antiquities. They band together to deliver a cursed ring to the train’s locomotive, seeking to destroy it by tossing it in the engine’s firebox.

Their journey forward is met with opposition from a motley assortment of foes acting at the behest of the ring’s creator, an ageless, monacled svengali known as Sir Ron DeSeever.

The Power of Love
The PCs get involved with aiding two young lovers whose situation is remarkably similar to that of Romeo & Juliet, but with the distinction that these two young lovers have also just developed minor psionic powers and that if the PCs investigate closely they will discover that both the attraction between the two lovers and the feud between their families were both deliberately set up by a coordinated effort of the families' patriarchs as part of an unethical experiment to turn their children into a "psychic capacitor" (the two lovers are the plates, the feud between the families is the dielectric and the power of love is the current)

Journey to the West: Dark Timeline
The Buddha once tried to contain a powerful upstart godling by trapping him in the Buddha's Palm, which encloses all the multiverse. This failed, and as a result two fingers were severed and floated off into the Far Realm. Now the fingers have been mutated into monsters and are attacking the multiverse

Out of the Past, To save the Future
One or more of the party is actually plucked out of the past to bring ancient knowledge into the future that has been forgotten or convoluted with time that is critical to stopping a coming threat. (This one has lots of possibilities and can be played as a slow burn where the threat may not even be known yet.)

Stuck in the Future Because of the Past
Another time travel scenario ripped from The Planet of the Apes. Astronauts are trapped in a cosmic event which catapults them into a future where humans are gone a technology is too. Suddenly the reappearance of humans with a powerful new magic named Psiants (lol) is scary. As an alternative, a player can be a human and ally with a party to find out what happened (Damn you all to Hell, You blew it up!!) and reintroduce the human race to new earth.

Investigators of the Lost Ark
Call of Cthulhu. The deep ones and Esoteric Order of Dagon are finally making their move for world domination with Dagon himself at the forefront and global war has broken out. The only weapon known to be able to stop Dagon is the Ark of the Covenant, but it's been missing for centuries.