ZEITGEIST Cauldron Born: Which Station is Which on the Subrail Map?

I am using the ACT I The Investigation Begins to run Cauldron Born.

I am confused by the description of where the stations are. Out of the guide, I can get the following information:

When I look at the map on page 49 which is refrenced,
Pardwight is shown as the 3rd station from the left or 8th from the right.
Hmmm. Not very satisfying. I have to assume that Darvill is then two stations to one side or the other.
It can't be to the left, because that is the end of the line. I must assume this is Golden Point.
To the right puts Darvill station at the edge of the Kaybeau fairgrounds.
That does not sound right either, but OK. So where can Baker station be?
We know it is on the red line and is either 3 stops or 6 stops from Darvill.

If it is only 3, then I can't make it in 3 stops to the red line if I go over what I presume to be Golden Point.
If it is 6 stops, I land on the second station on the red line or 8th if I cound from the right.


I can't figure out which station is supposed to be which. Can anyone help?

Apologies for the thread-necro, but this is the exact question that I was about to write up.

I figure Golden Point has to be on the coast, because that's where the Armageddon Beasts are landing. Also, Lanternwood Station (where you fight Kaja) is "located a stone’s throw from the fairgrounds" (pg 216) and is still under construction.

I'm terribly curious where Darvill station is, because it's "a stone’s throw from Hotel Aurum" (pg 387). Which has to be roughly on the left side of the map, as Brakken ends up walking by it on his route from the Royal Shipyard to Stray River (pg 350).

And Baker to Darvill is six stations apart.

(Aside: it seems stone throwing is a common way to measure distances from rail stations!)

Where did anyone else put the events in the eschatologist plotline? 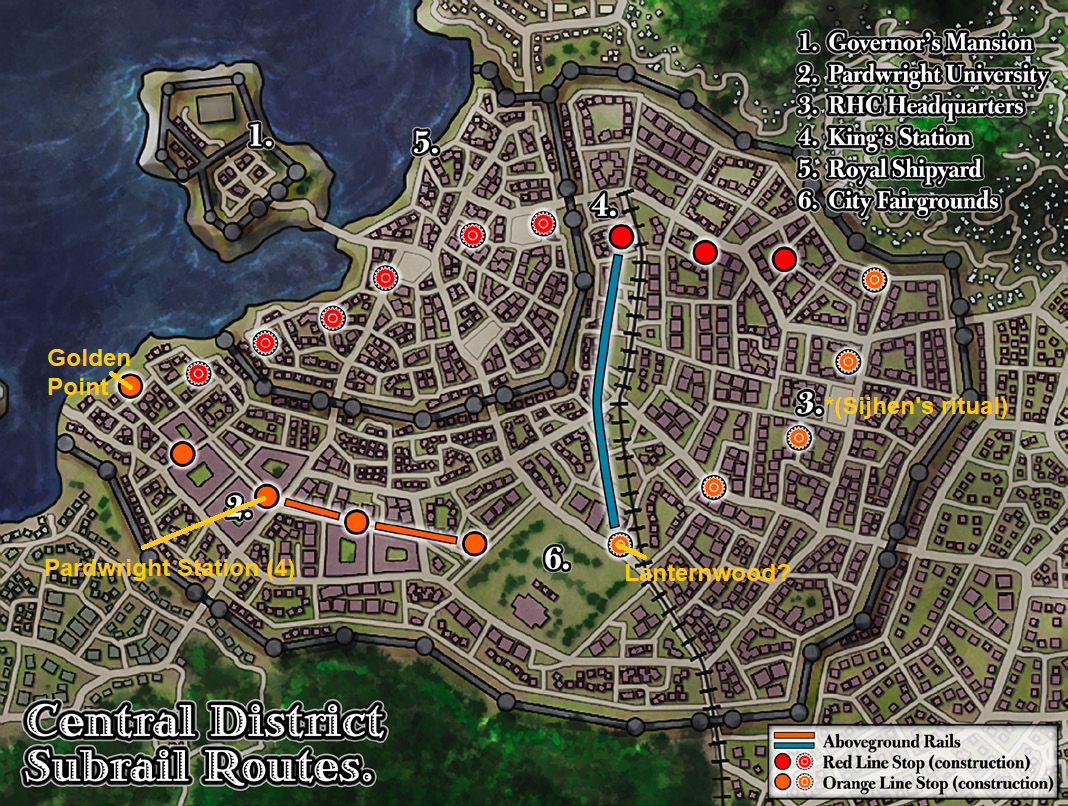 Oof; no disrespect to the authors, but the subrail system is a nightmare. Particularly when you look at the Red and Orange lines and try to figure out how they intersect for the purposes of Zubov's plan. Particularly when you remember the bit about where the Malice Beasts end up, per their intended distraction.

Fortunately, for my game, the party deduced it would involve the subrail station and arranged enough guards to prevent it from going off, so Zubov went for a different target- one that did not involve trains.