Staff member
So we taste-tested a few commercial pork sausages for the beefless gumbo, although I couldn’t find a chorizo when I was looking. Eventually, we decided on 2 different “Andouilles”: one from Holmes (kind of smoky like the beef country sausages we use) and Aidell’s (spicier links, but not as spicy as my home-made Louisiana hot sausage).

Bonus: we discovered we liked the pork Dietz & Watson Bratwursts, and will probably buy them again. Not what we’re looking for in a gumbo, but tasty.

Scottish baps this week. Wife likes these stles of meals so been eating them a lot. 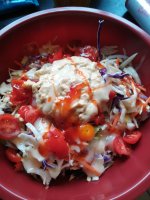 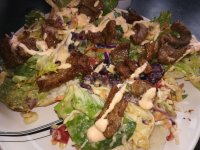 With the beef on the baps.

Staff member
Went grocery shopping today for a few things I needed for the weekend, and decided to start finalizing the acquisition of ingredients for the altered gumbo.

…only to find that the store I was in had the BRANDS of sausage I wanted, but not the actual KINDS. So I bought one more andouille from yet another brand to try, and tasted it tonight. It, too, would work.

So now, I have 3 pork sausage options for when I get the green light to cook the meal.

Had a Turkish lam salad tonight for dinner. Around $8 usd lamb, rice, and various salads.

Beautiful lamb just melted in my mouth. I like how the Turks roast it vs our bleah lamb.

Not my photo via a friend. Blue Cod. 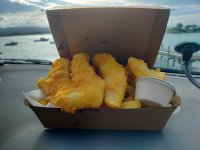 Mmmmm…haven’t had any fried cod in MONTHS!


Not the smartest places to go middle of winter.

Doubles doses are lower but it at least indicates willing people.

Staff member
I’m cooking a bit more than usual. Not only is my maternal aunt still hobbled a bit from post-surgical recovery of one arm, my paternal aunt’s fiancée (a damn good cook himself) just had a big surgery himself. So I’m supplying meals to 3 households- not daily, but often.

The big ask in that regard is filling in for the fiancées meals. His strength in the kitchen is his beans. Red, white..it doesn’t matter, he does them extremely well. And while I think my reds are better (of course), his are so good as makes no difference, and he makes a broader variety, AND he makes them frequently. Most of the time, everyone in the family has at least 1-2 containers of his beans in the freezer. But he’s been sick for a while, so everyone was out.

So I cooked up 2lbs of reds, but ALSO my first EVER batch of whites. So far, so good on the early reviews.

Went out again. Still close to lockdown half expecting another one. 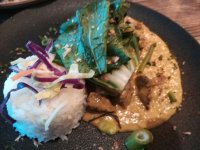 Not a big fan of Thai curries generally due to the coconut cream. This one was nice.

And some chicken wings. 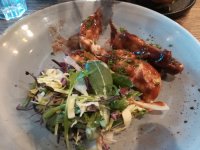 Staff member
After attempting and failing (for a variety of reasons) to get our first taste of Puerto Rican food, today Mom & I finally got a taste of part of our heritage.

Tipical Puerto Rican Food filled with soul and generations of flavor passed on thru our ancestors.
www.adobopuertoricancafe.com

Because we were eating on the run, it was simple appetizers as a culinary introduction again. In this case, it was beef empanadas, shrimp empanadas, fried sweet plantains, and we split a pastry.

Last things first: the pastry resembled a simple glazed twist donut, but had at least as much in common with a cheese danish. Not for dessert fans who want super-sweet stuff- this had a good balance. The glaze was honey based, and the cheese filling was slightly sweet and slightly savory.

The sweet plantains were also tasty, but unlike some we’ve had from other Caribbean/Central American/South American cuisines, these were not buttered and sugared before cooking. No cinnamon, either. Instead, they let the fruit speak for itself.

Finally, the empanadas. Gotta say, these were excellent. The crust was more like I’m used to in American fruit hand pies, kinda buttery and flakey, as opposed to the ones we get at Colombian restaurants (usually a hard but tasty corn-based shell, akin to what you’d find on an American corny dog). Whoever made those crusts knows how to bake, and the fillings were first rate, too. The shrimp one had a tomato sauce, onions and other bits in there with the cocktail shrimp, and the ground beef ones were kind of like a really good meatloaf or pot roast.

(No pix, because it’s impossible to balance food in your lap and take good pix in a car.)

Would give the non seafood ones a shot.

Staff member
HOWEVER…here’s pix of the aforementioned stuff I cooked for the fam recently. Because I was cooking for 7 AND wanted leftovers, all of the cooking was big batches.

These are the red beans, just before I put them in the fridge for the evening. 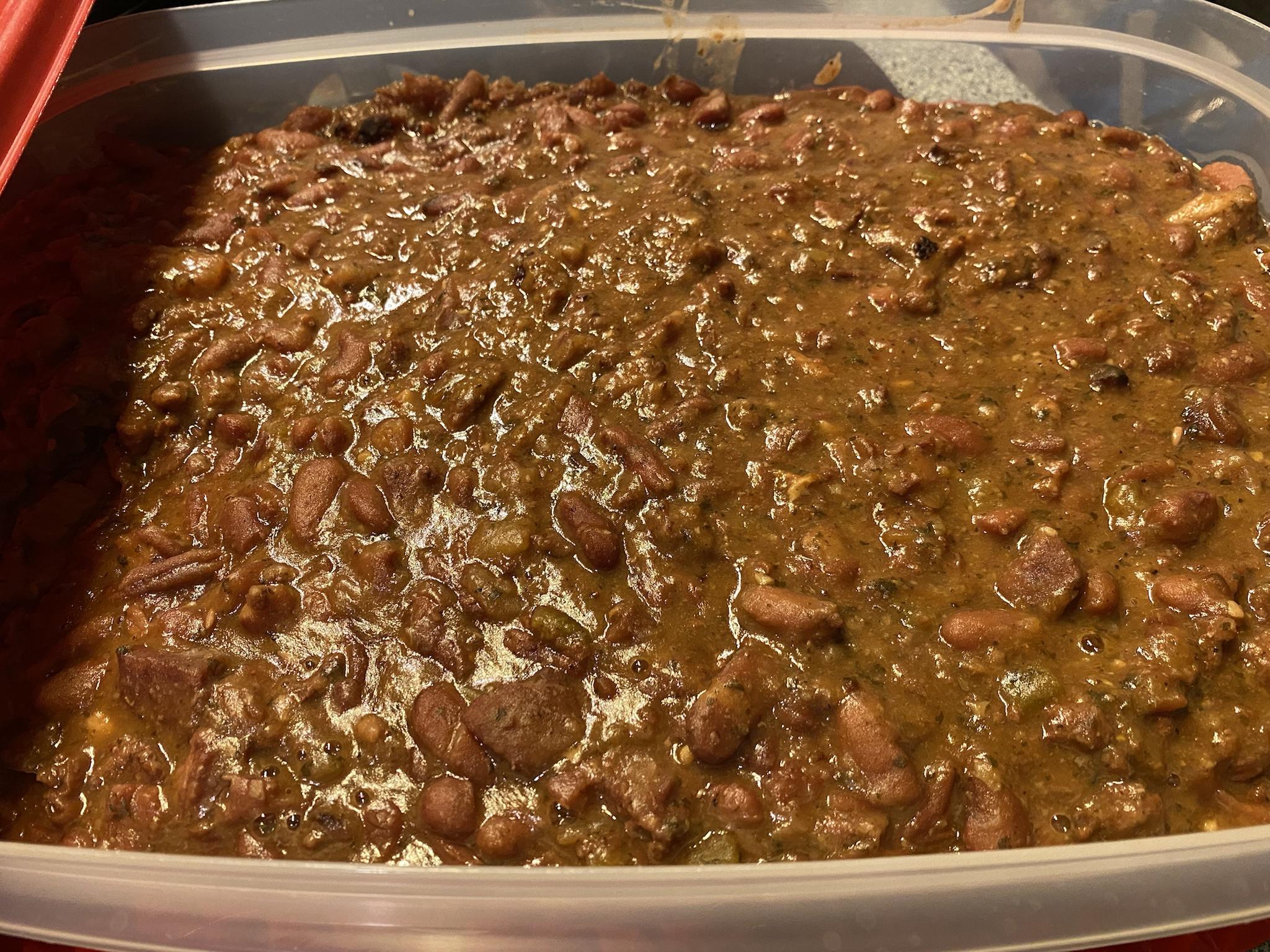 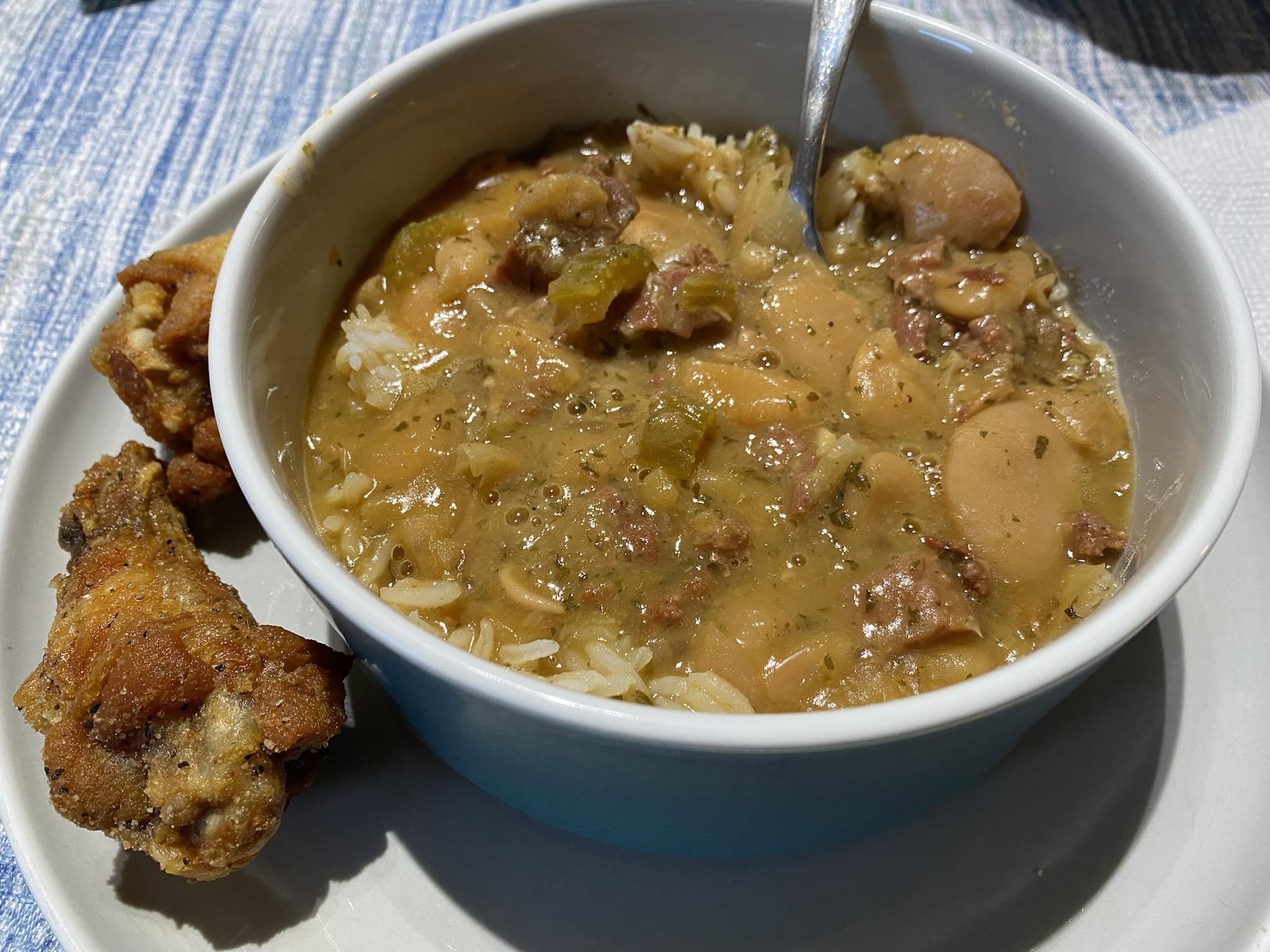 This is a really jazzed up version of taco soup. In addition to the usual ground meat and Louisiana hot sausage, I added some leftover roast beef medallions &amp; gravy from the freezer, as well as the ribs from that roast I did just a few days before. This is one of the last three servings from that meal, with one of the ribs serving as a divider in the bowl. 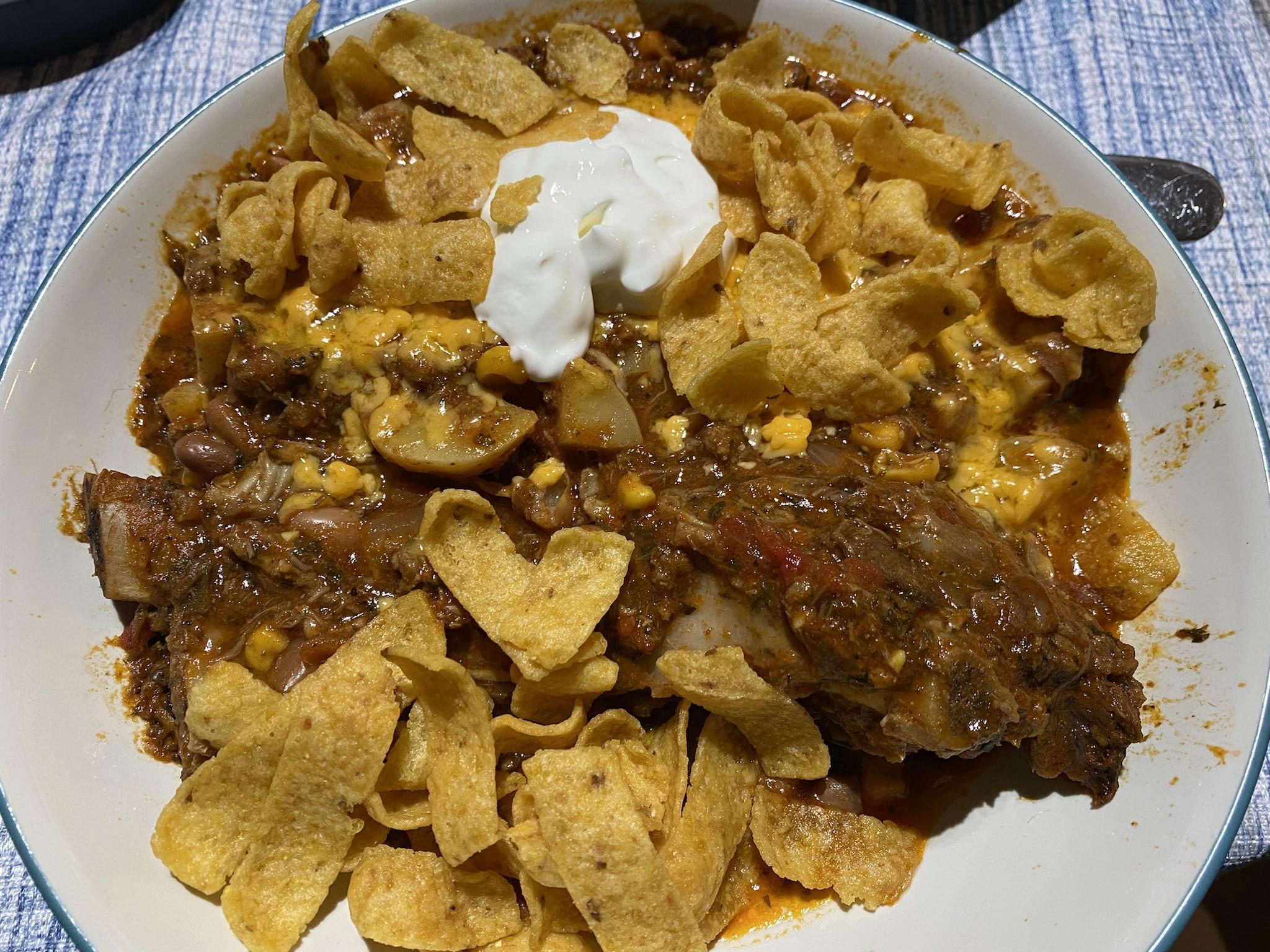 Zardnaar said:
Would give the non seafood ones a shot.
Click to expand...

They also made a chicken one we didn’t try. Maybe next time!

But we’re also looking at the other stuff, too. The alcapurrias look like torpedo-shaped versions of the Colombian empanadas we’re used to. Their sandwiches look like they’re hot & pressed, like cubans often are.

And I’m going to have to hit this place without Mom (because of Covid fears) so I can dine in and try the messier-looking dishes.

Dannyalcatraz said:
They also made a chicken one we didn’t try. Maybe next time!

But we’re also looking at the other stuff, too. The alcapurrias look like torpedo-shaped versions of the Colombian empanadas we’re used to. Their sandwiches look like they’re hot & pressed, like cubans often are.

And I’m going to have to hit this place without Mom (because of Covid fears) so I can dine in and try the messier-looking dishes.
Click to expand...


I'm not super familiar with all of the terminology but it sounded nice.

You’d like empanadas. They’re a kind of fried or baked hand pie common all across South & Central America, and parts of the Caribbean. Most of them are half circles about 4-6” long, and about 3” across. They’re usually stuffed with savory fillings, but some can be sweet.

For these baked empanadas, Gaby Melian says the addition of green olives and raisins in the filling is essential.

Corn/Corny Dogs are hot dogs on a skewer, dipped in a batter, and fried.

If you've been to the State Fair of Texas, there's a good chance you've also had a Fletcher's corny dog, the quintessential fair snack consisting of a hot dog wrapped ...

A Cuban sandwich is a hot sandwich typically made with ham, pulled pork, mustard, pickles, cheese and other goodies that has been pressed (flattened). The sandwic at Adobo looked like close cousins, but made with meads other than pork.

Make This Pork-Packed Cuban Sandwich at Home, Never Look Back

We can get similar sandwich to that Cuban one here. Not overly common though.

There's a classic dish here called "meat with chips". Kinda similar to loaded fries but you go to a Turkish place and can order meat off the kebab and it's put in top of a pile of fries. 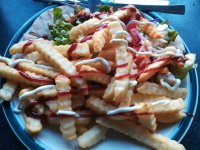 More of a tossed chicken salad iskander style on cut up it's with the chips on top of that. 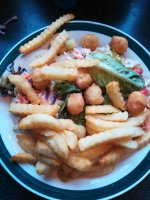 Friends gone hiking in the mountains. On his way home via a small town that does awesome pies. 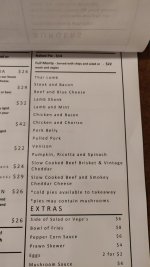 Anything tempting Danny? I'm ordering Chicken and Chorizo, Beef and Blue cheese while the wife is ordering pumpkin, spinach and ricotta and the beef and smokey cheddar pies.
Last edited: Sep 25, 2021

Zardnaar said:
Friends gone hiking in the mountains. On his way home via a small down that does awesome pies.

Anything tempting Danny? I'm ordering Chicken and Chorizo, Beef and Blue cheese while the wife is ordering pumpkin, spinach and ricotta and the beef and smokey cheddar pies.
Click to expand...

I was out to a late night snack with a buddy who hasn’t been around in almost a month. Sorry!

I’d have been sorely tempted by the beef & blue cheese (in fact, we shared an appetizer of bacon-wrapped flatiron skewers with a blue cheese dip), the brisket and pork belly as 1, 2 & 3. Spinach would have been a close 4th or higher…if it didn’t have pumpkin.

I don’t dislike pumpkin, but I’m REALLY picky about it. Mostly, I eat it in soups or dessert pies.

Another food thread, why not?
2