Introduction
As mentioned over in this thread (D&D General - Original photo of David A. Trampier with his cab, found.), I dug out and scanned some correspondence I had with David Trampier during 1985 while he was trying to get an anthology of his Wormy strip published. Rather than just post them, I have expanded this to include some personal commentary for context, as well as some materials sent out to the backers of the anthology project.

My Introduction to D&D and Trampier's Art
Like many who get into role-playing games (especially D&D), the fantastic artwork drew me in almost as much as the game itself. I would say D&D's success owes much to the early artists who helped define so much of what is "D&D," even today. For me, I found David Trampier's artwork to be especially compelling.

The cover of the AD&D Players Handbook really drew me in. Leafing through the AD&D Monster Manual, there are so many great pieces: the giants, the goblin, the hell hound, the homonculous, the lich, the lizard man, the werebear, the nightmare, the pseudodragon, the rakshasa, the remorhaz, the salamander, the vampire, the wight, the wyvern, and that group of adventurers basking in the glow of the open treasure chest!

While the AD&D Dungeon Masters Guide contains less of his work, it has two of his more memorable pieces: the green dragon fighting a bunch of kobolds, and his masterful full-page Emirikol the Chaotic. As an aside (and I think it has been pointed out on the Enworld Forums before, but someone may discover this here), the background for that illustration is based on the Street of the Knights on the Greek island of Rhodes. 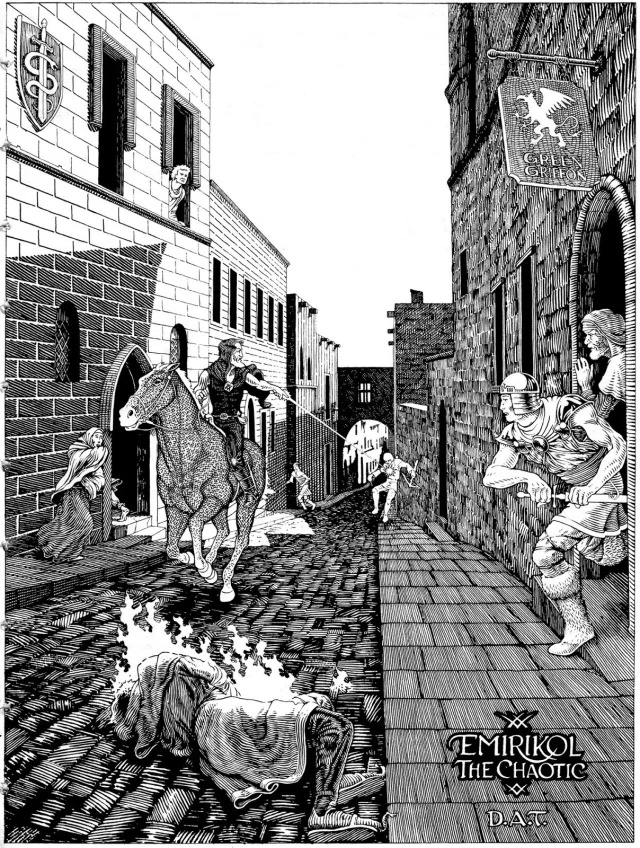 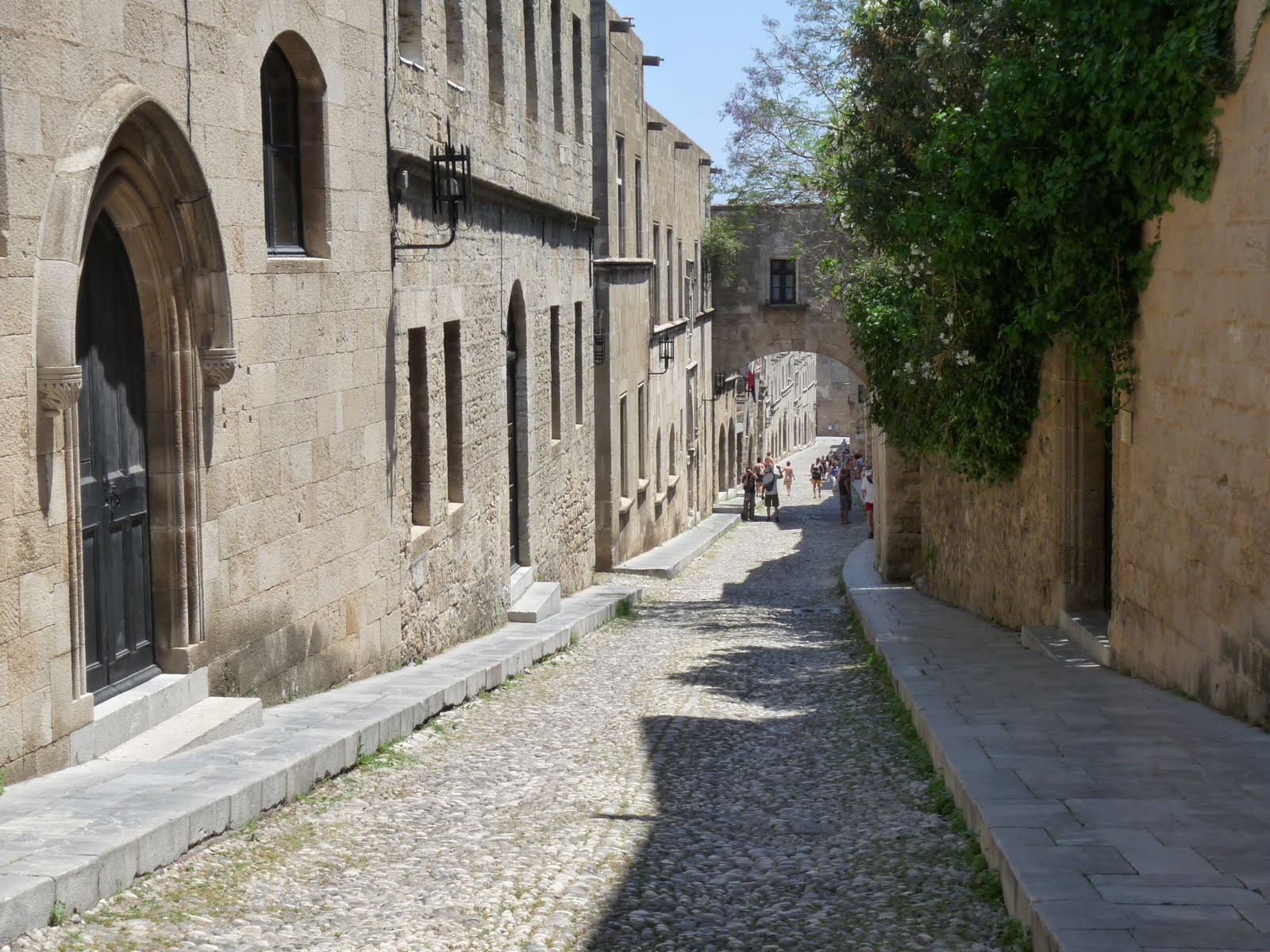 In time I picked up the Dungeon Masters Screen, and immediately recognized Trampier's style in the epic piece gracing one of the screens. It quickly became (and remains) my favorite Trampier piece. 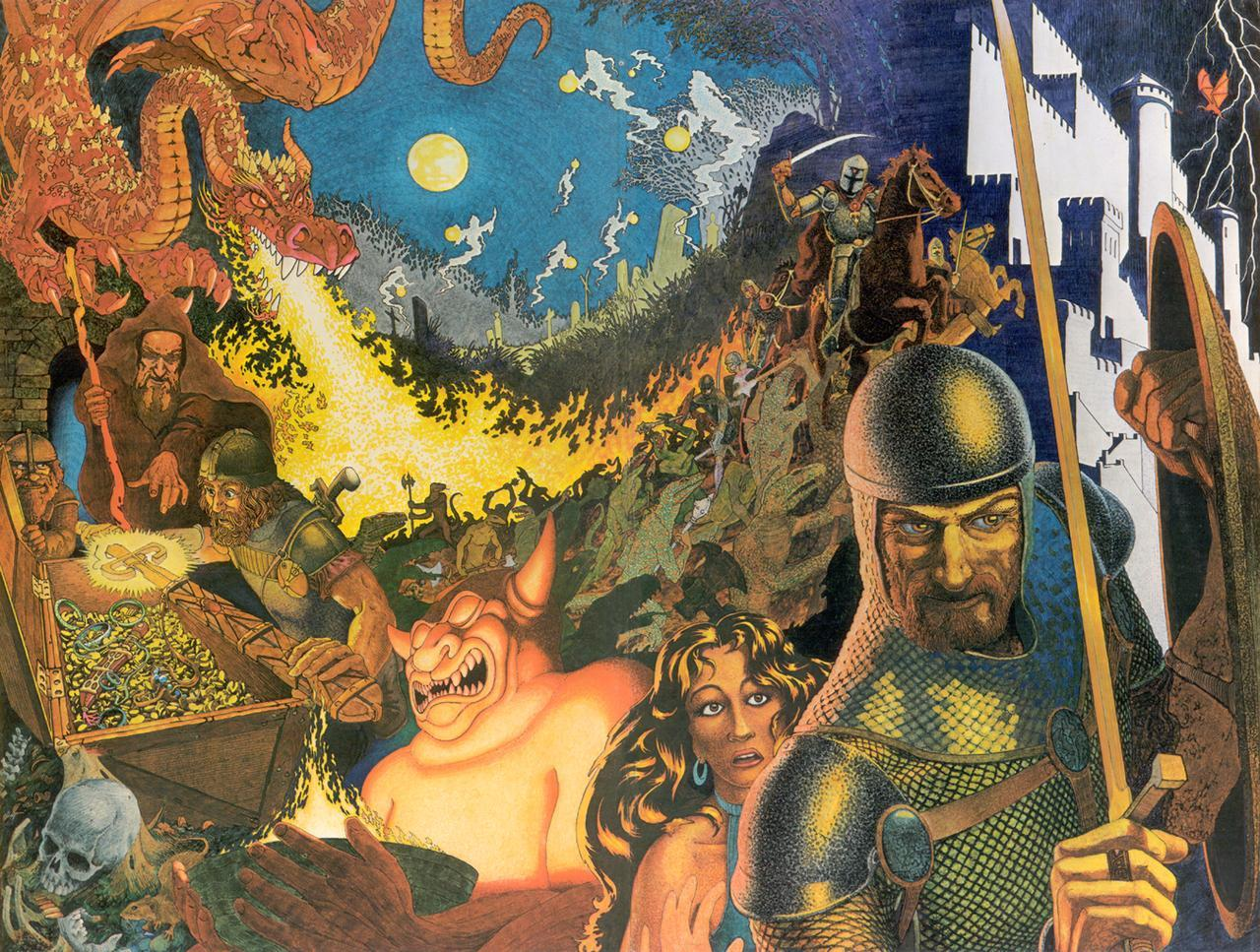 My Introduction to Wormy
In the summer of 1982, to sate my growing D&D appetite, I picked up my first copy of Dragon, issue 63. In the back, I found the funny What's New with Phil and Dixie, and a page called Dragon Mirth - a collection of amusing single-panel comics. Between these two was a colorful two-page strip entitled Wormy. It was not a gag strip, and seemed to be some ongoing story. The artwork appealed to me. I wondered who the artist was but I found no creator credit within or by the strip. Going back to the art credits for the issue, I saw David Trampier's name. Searching through the rest of the issue I saw nothing else that looked like his art. By process of elimination I figured that Wormy had to be his work, and looking again at the strip with his name in mind, I began to see his style peeking out behind the cartoony dragon and cyclops. The next month, when I got Dragon issue 64, my theory was confirmed as his "Tramp" signature was in the last panel of that issue's strip. I soon had a subscription to Dragon, and I tried to hunt down back issues. I was able to find and buy issues 50 through 61, and only a few scattered issues as far back as 42. I enjoyed Wormy but I decided that I was doomed to never see the first chapters of the story.

Worm of Dread, Inc.* (* = Incinerator)
In the fall of 1984 I began attending college. I had Dragon sent to me at university so I could continue to get my monthly fix of D&D while there. In the winter, Dragon issue 93 (January 1985) arrived, and my eye caught this ad on page 87: 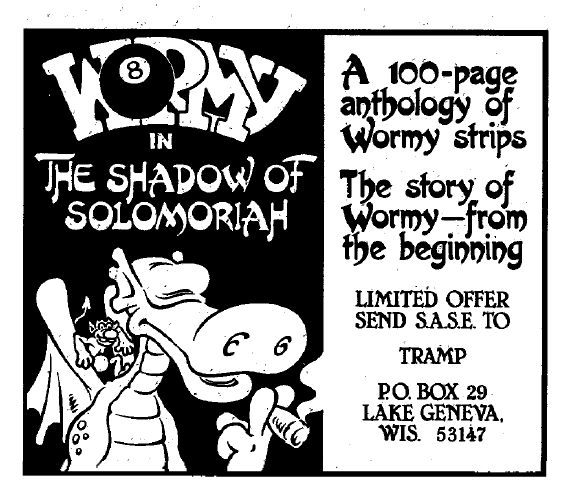 At last! Here was my chance to read the full Wormy story! I quickly sent a SASE to the address and soon I received the following: 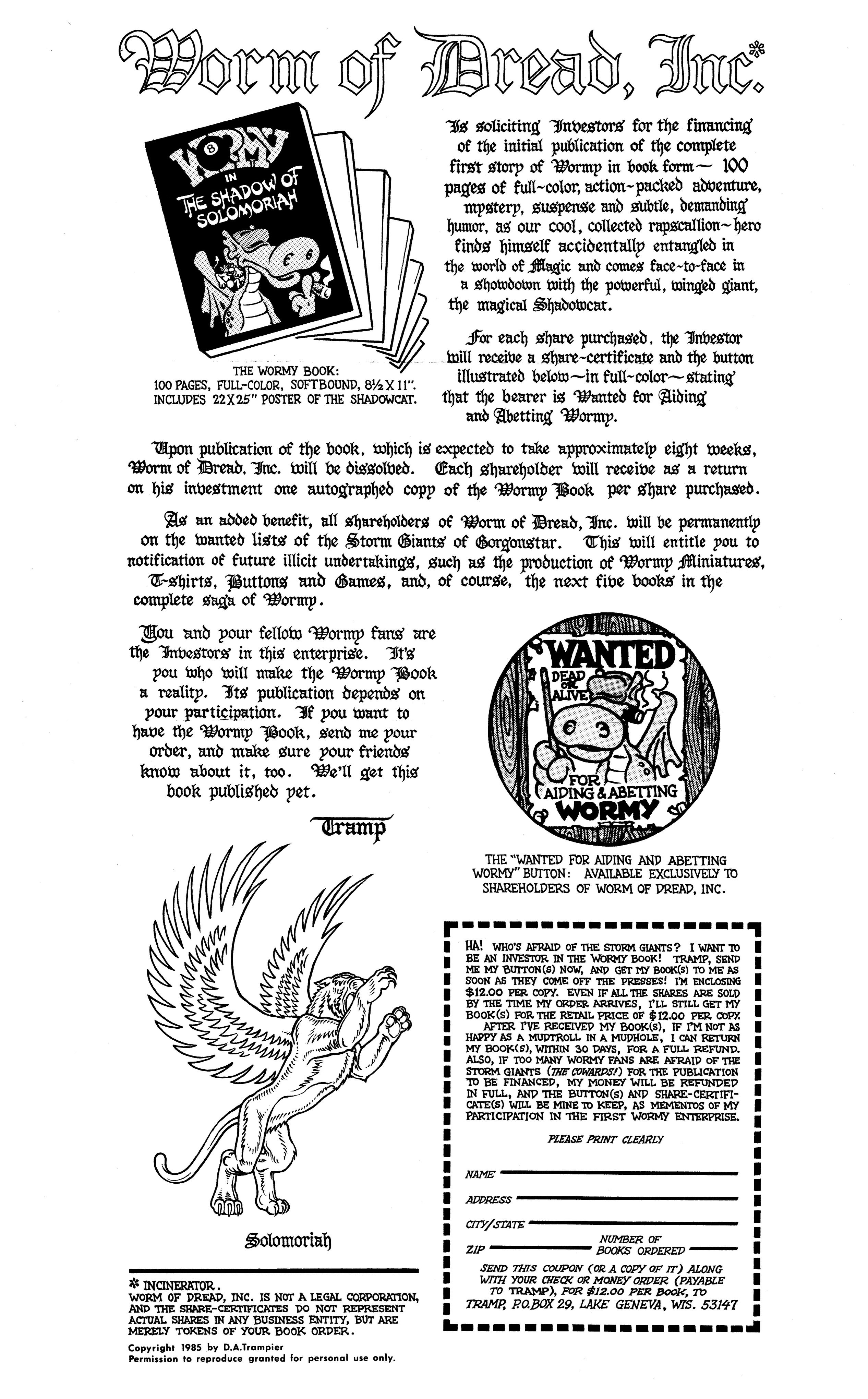 I fired off my check for $12.00, and soon I got the Wormy button, along with my investor's certificate: 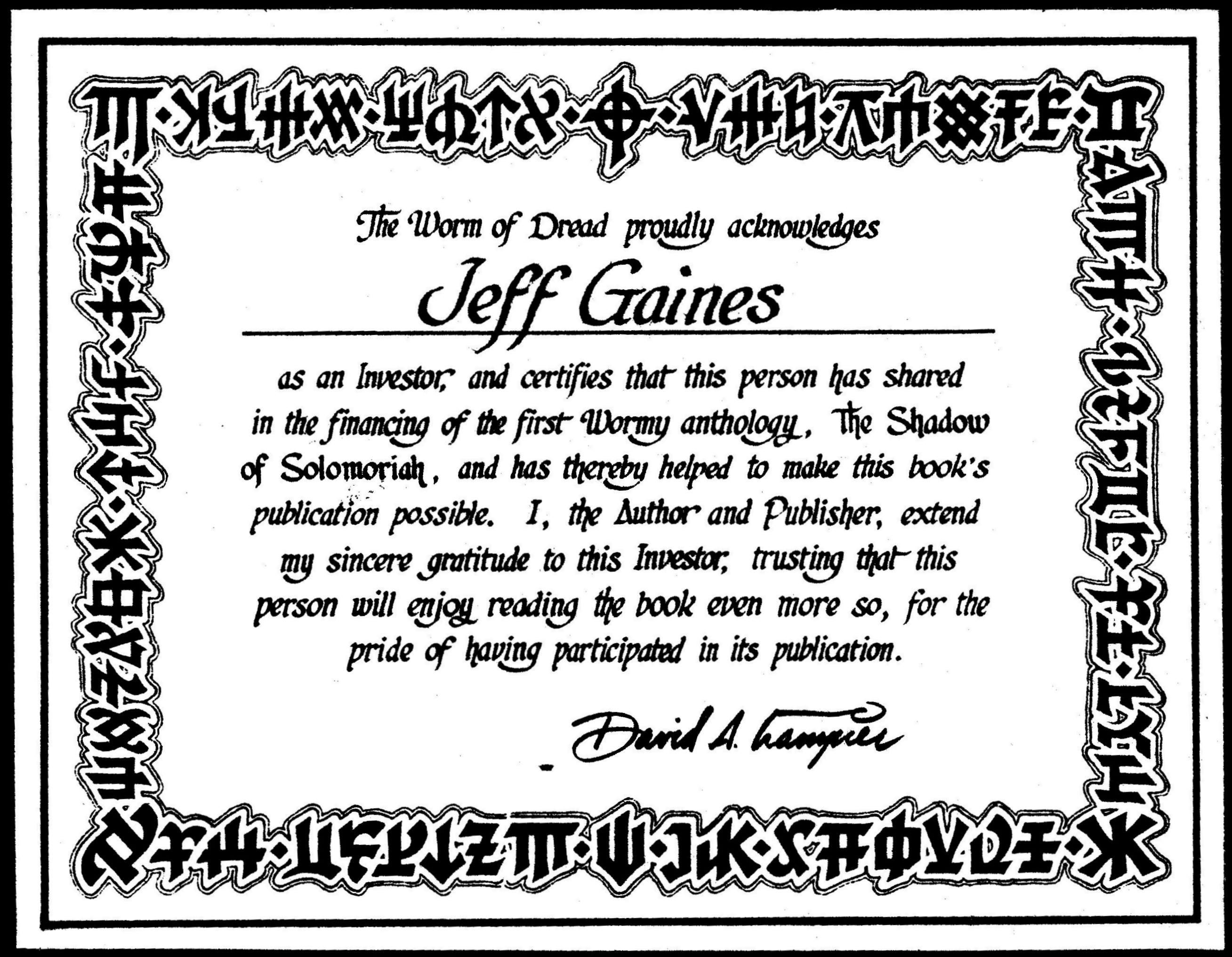 The Fan Letter
I think it was over Christmas break I decided to write a fan letter to David Trampier. I was pleasantly surprised in January that he very kindly replied with a handwritten 2-page letter to me: 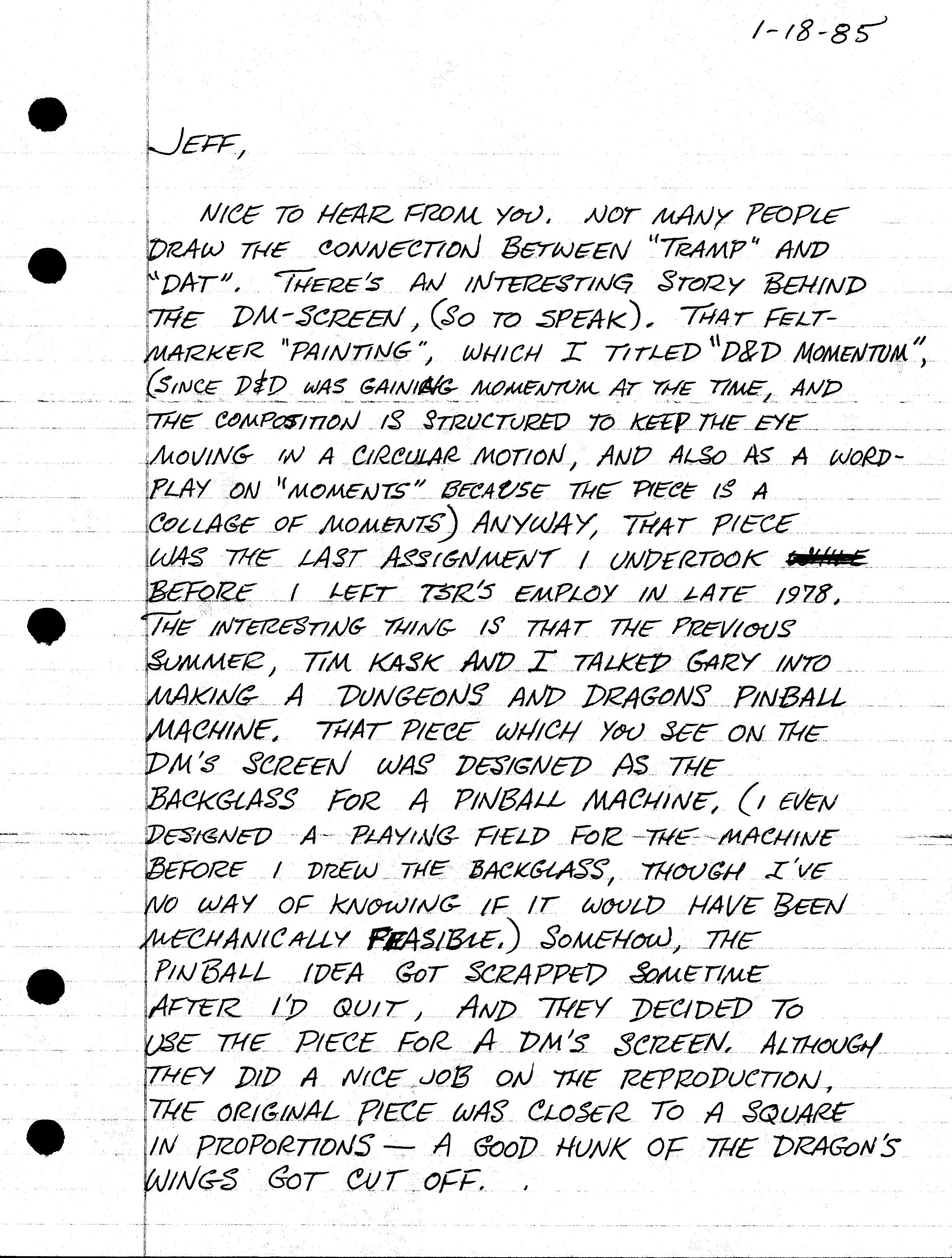 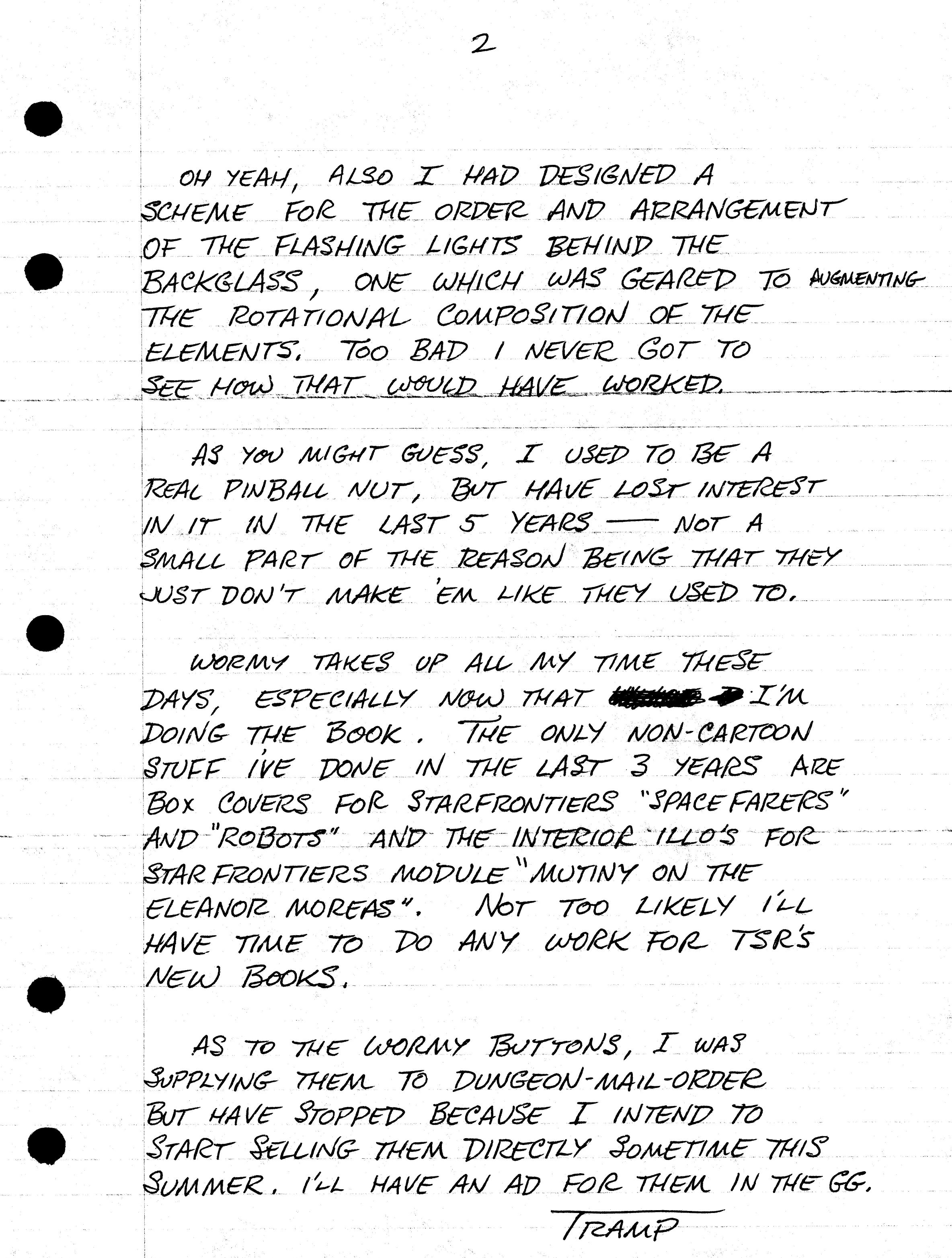 Amazing that the Dungeon Masters Screen piece is done with felt markers! Also, in that last line, "GG" refers to the Gamers' Guide, a section of Dragon where they displayed ads. I wrote back to him after that letter, thanking him for taking his time to reply, and talking about things I enjoyed in his recent Wormy strips.

The Wormy Anthology Hits Delays
In the Spring of 1985, as the project's delivery date seemed to be slipping, I sent him a change of address to my home address in case the anthology was shipped past early May. Shortly after that, Worm of Dread investors received the following: 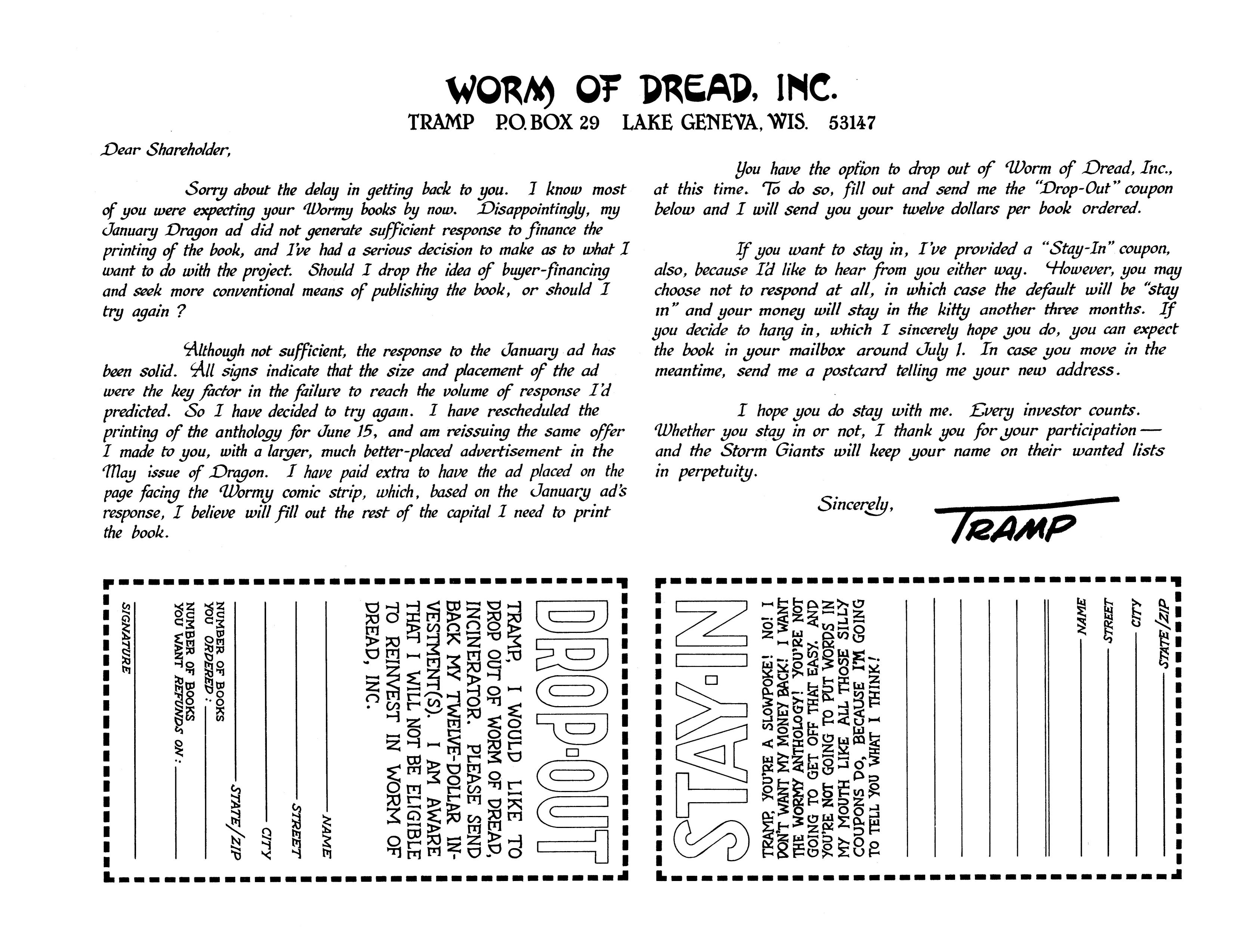 Without hesitation I sent in my "Stay In" coupon. In April 1985, I received the following postcard: 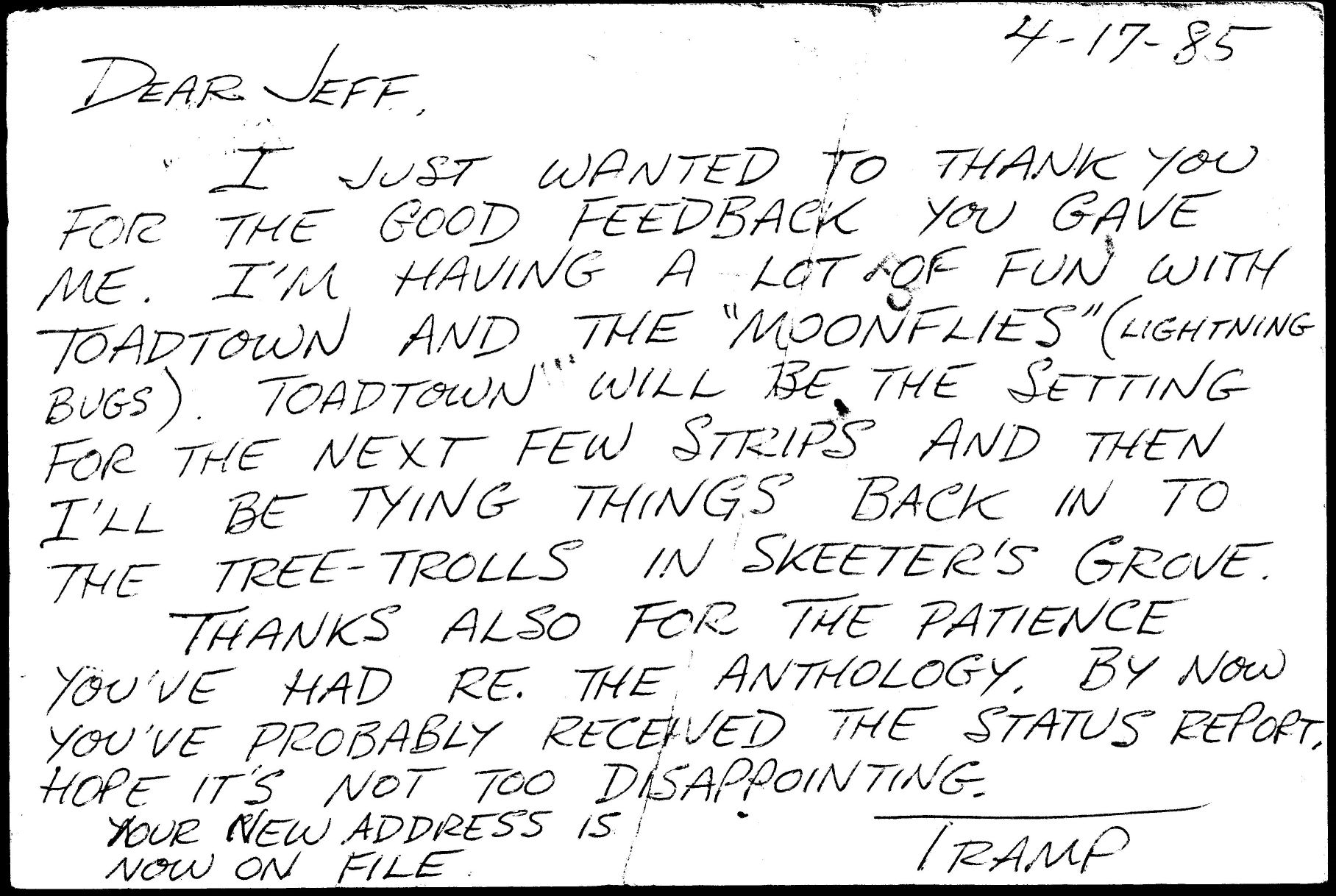 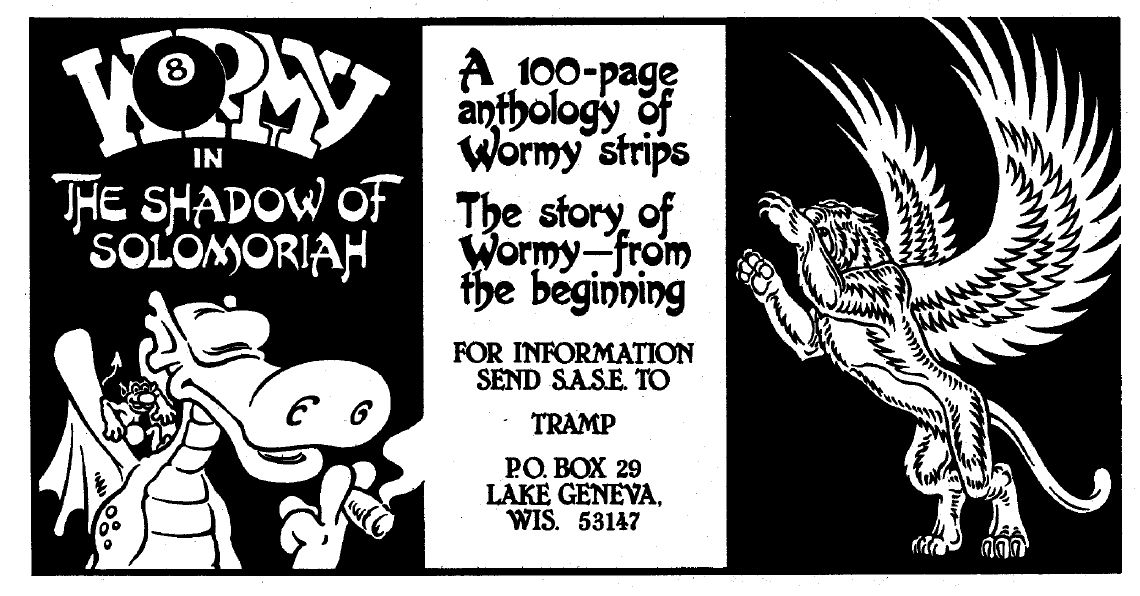 June 15 came and went with no news about the Wormy Anthology. I believe I wrote him again in June, as my family planned to move in July and my home address would change. In late August or so I was going back to university so I sent another change of address, in a letter with some questions about his process and the tools he uses to produce Wormy. I also asked if he had ever worked in comics or animation.

Worm of Dread Calls It
In September/October 1985 I received the following letter: 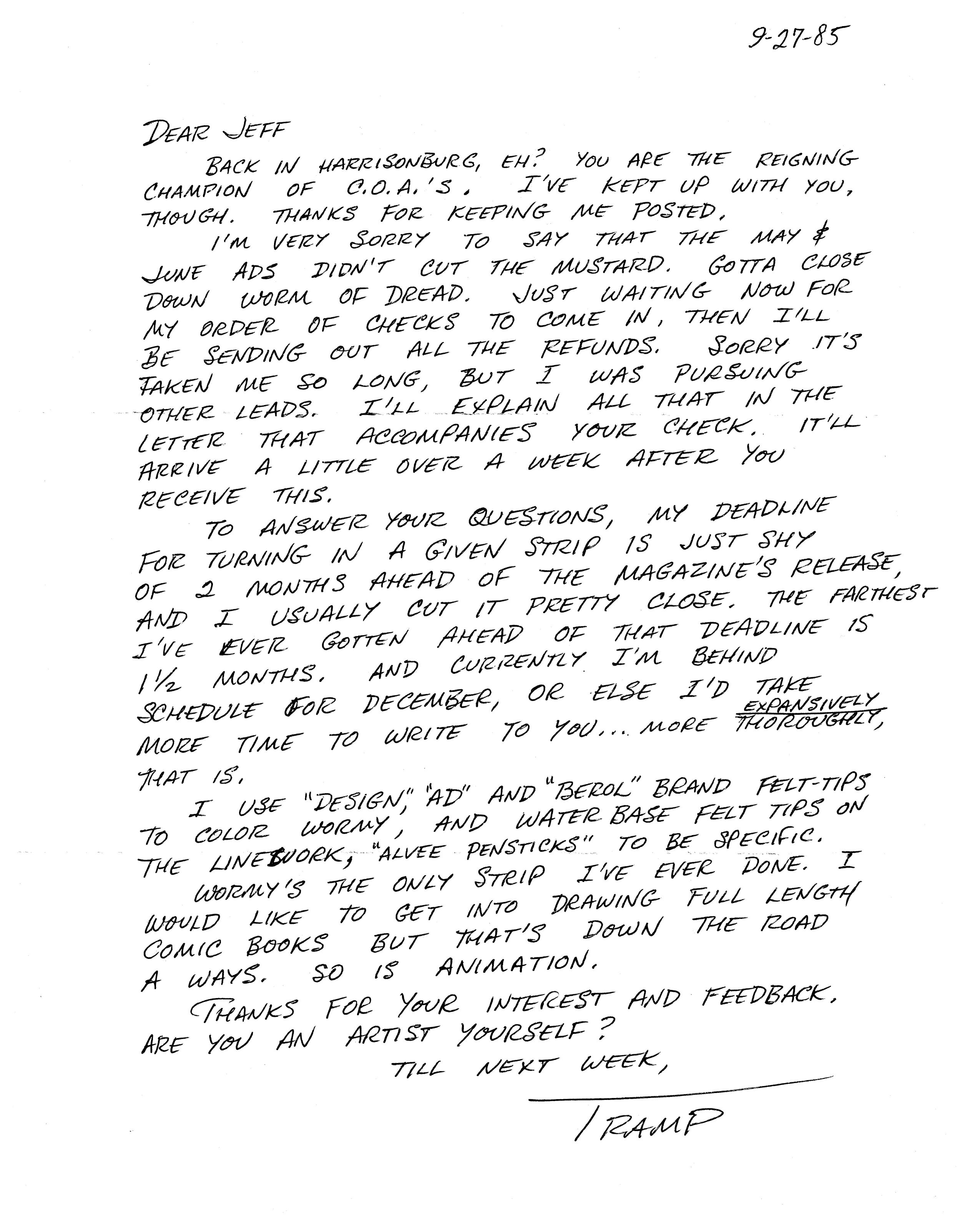 Shortly thereafter, investors got the following with their refund checks: 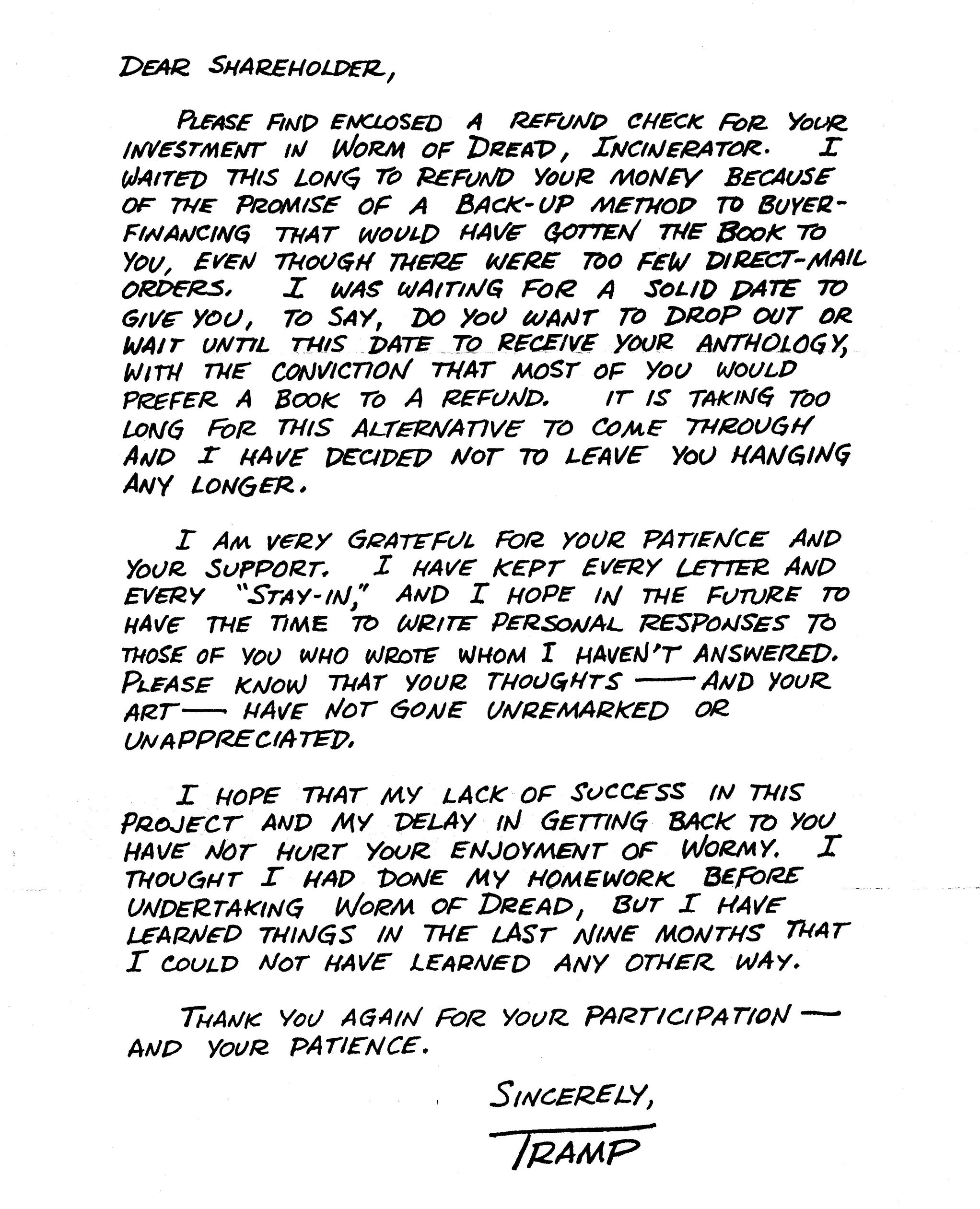 He mentions here that he was pursuing an alternative to the buyer-financing model, but does not elaborate on what it was. Some have speculated he may have tried to get TSR/Dragon Publishing to back it. I don't know. It is interesting to note in the second letter he says he has thought about doing comics and animation work, but it was "down the road." Alas, neither came about.

I replied to the second letter, but I don't recall much of what I said other than I appreciated his efforts on the Anthology, and that I hoped another opportunity for it would arise some day. And that (to answer his question) I was not an artist myself (Far from it! ).

Trampier continued to produce Wormy for over two more years, until Dragon 132 (April 1988). IIRC, the release date for Dragon back then was about a month before the cover date, so the April 1988 issue would get to subscribers in early March. Using his deadline info from his second letter, he probably submitted that last strip around December of 1987. I know he was disappointed that the Wormy Anthology was not successful (weren't we all?), but with the timing, I don't see this as a precipitating event for him leaving the strip and the business.

1988 was a very busy year for me, and by the time I noticed that Wormy had missed a few months, it was too late, and I saw the announcement in the Letters column of Dragon 136 (August 1988) that Wormy was no longer going to appear in Dragon. I thought about writing to him to see what he was working on, but job-hunting was taking my time then, so I never did. I regret it today.

Sometime around 2001 I bought a copy of the Dragon Magazine CD-ROM Archive, and I was finally able to read those first chapters of Wormy.

Also interesting to note that Wormy was projected to be a 600-page epic!

Supporter
Such a sad story. If he were alive and well he could be on TikTok streaming his art process and selling new pieces for bundles of cash.

Thank you so much for sharing. A wonderful, nostalgic, and melancholy record. These letters and documents are a lovely trove.

Staff member
And, good heavens, these days he'd get that anthology funded in a snap.

I wonder who is in charge of the estate? I’d certainly e interested.

darjr said:
I wonder who is in charge of the estate? I’d certainly e interested.
Click to expand...

I'd be all over it. I wonder if there even is an estate, as such? I've never heard anything about family or heirs.

Brings to mind the fact that Peter Bebergal's Appendix N compilation only includes David Madison's Tower of Darkness because Bebergal, in scrounging for leads on the rights, managed to find a blog post by a woman who had been a friend of Madison's, and in reaching out to ask her whether she knew, found out that she had wound up his only heir.

More seriously, this is great stuff. Thank you for posting this.

Thank you for sharing this. It's a bitter sweet recollection. Was always a big fan of Tramp (as my avatar attests).

That's an amazing bit of documentation and RPG history ephemera!

I remember reading Dragon magazine early on, possibly before I even had my own copy of the rules. I loved reading Wormy and those comics take me immediately back to those heady days of when D&D was all-new to me.

This is a wonderful writeup! THanks for sharing.

IIRC, there was a KS project but for some reason I don't recall Trampier pulled out. I was ready to back it. I can't find any info on it.

The Strange Case of David A. Trampier

Grognards and other fans of 1st Edition D&D will remember some of the greatest illustrations in role-playing being drawn by David A. Trampier (aka ‘TRAMP’ or ‘DAT’). The…

IIRC in the last printed Dragon Mag they did some articles looking back at the history of D&D and Dragon Mag and Trampier just one day decided to cut all ties to the industry and "vanish". A fan must have tracked him down some years later but he was told that he had closed with this chapter of his life, no interest to return to the industry and politely asked the fan to "lose his number"

Edit: Mezuka found the story and now I am sad that I had to learn about the finale of it. RIP in David

D&D General Original photo of David A. Trampier with his cab, found.
2