So, the battle with Vecna got me thinking more about grids and cover and such. Often, I use powerpoint for my battlemaps, etc. and I realized I think (pretty sure, actually) I was making an assumption about cover and some other issues.

Now I am asking others here what your interpretations/rules/readings of the rules are.

Below is a recreation (FIGURE 1) of the example in the DMG (p. 250) illustration an example of 3/4-cover. From the instructions, I think they messed up and this DOES NOT show 3/4-cover.

My assumption (given the example in the DMG) was you drew the lines from the corner closest to the target. But the text actually says just "choose A corner of the attacker's space".

So, in FIGURE 2, I chose a different corner and drew the lines-- and look at what happens! It is no longer 3/4-cover because only ONE line is blocked. Lines 1, 2, and 3 are all good.

This implies the example in the DM is wrong and the target would only have half-cover, not 3/4-cover.

If not the closest corner, I think matching corners on the spaces would be a good way also: 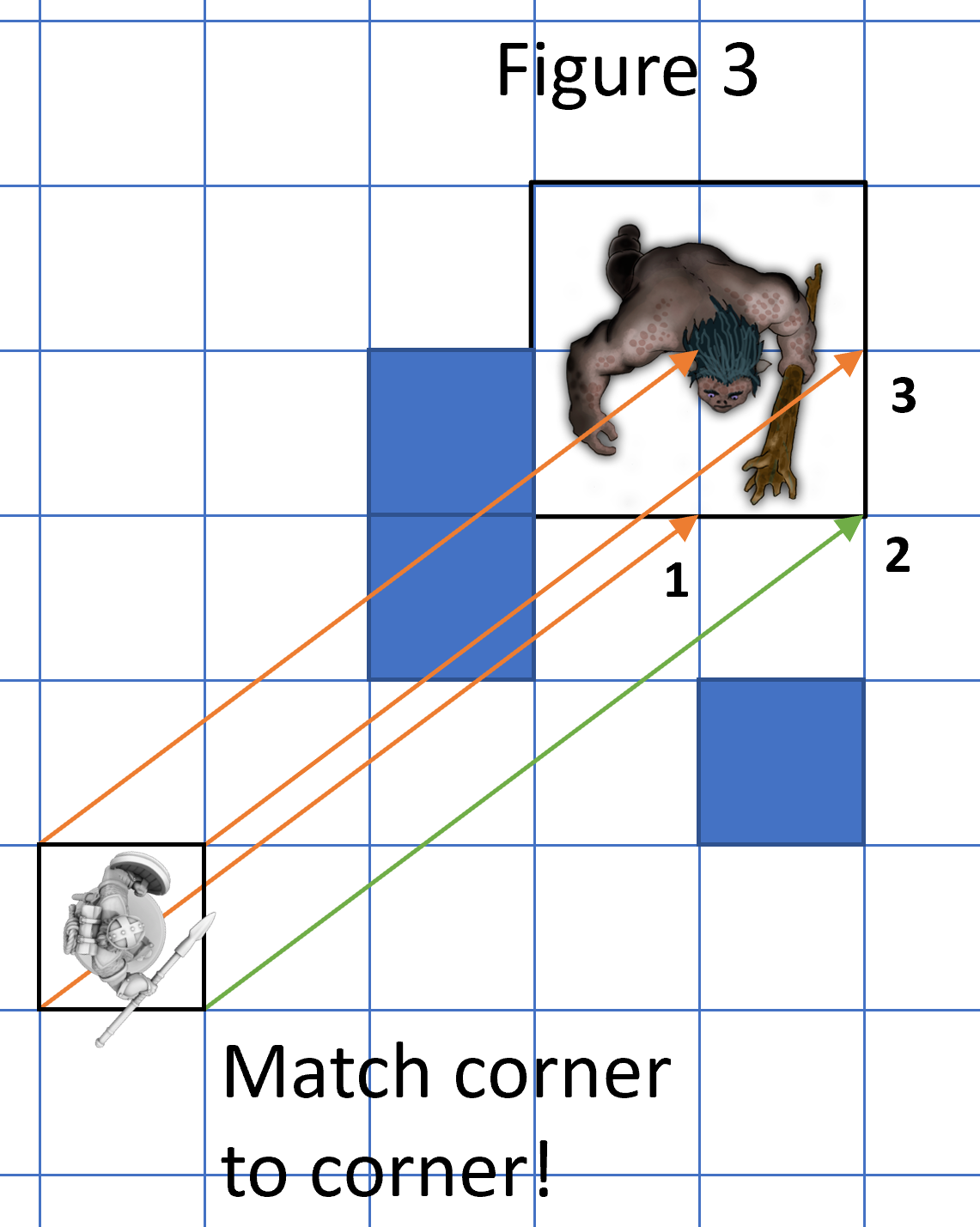 With this mechanic, only line 2 is good, lines 1 and 3 are now blocked. So, you would have 3/4-cover this way.


2. Occupying a space with an obstacle.

The pillars in the Vecna battle got me thinking about this one. I looked in the DMG, but couldn't really find anything on this specifically. In my maps, I normally don't have obstacles occupying less than half a space, but the corner-squares of the pillars easily occupy less than half the space.

Any one care to share their thoughts on these two topics or know of any rules I've misread or just plain missed??
Last edited: Jun 17, 2022

I consider the cover rules to be very generous to the attacker, but I do think the DMG example was overly simplified for the purpose of illustration. 3/4 cover comes up a lot when one has many creatures on the battlefield, but that would make a busy image.

To your point about the lower right corner: like many examples in the books, it was not made by a tactical player! Here would be a better example showing 3/4 cover: 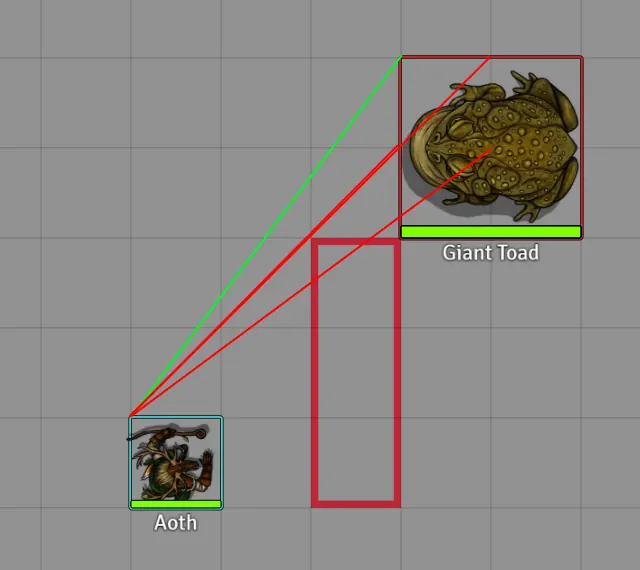 Even that is open to how one rules lines touching the corner (I rule they are blocked).

And while I can rationalize the standard 5e "choose any corner" rule as the "character moving about, leaning, etc., within the 5' space to get the best angle," I find measuring from the center gives a less generous result to the attacker, as well as fewer instances of precisely crossing corners. 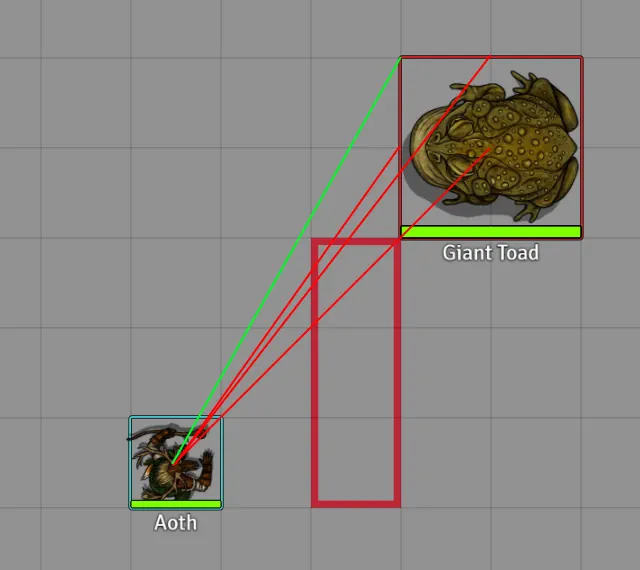 As for occupied spaces, your suggestion is generally the guideline I use.

If it’s really, really important (it almost never is), I’ve found center to center works best and is the most consistent. With larger creatures, center of each square. Center to corner or corner to center just gets weird.

Those of us that played DDM were likely all sensitive to the 'any corner' idea. It was a big part of the strategy back then, and in some Maps (Drow Outpost) there were a few locations that had very sneaky lines of sight that were very powerful. However. we don't all stick closely to the 'counting corners' method.
As a DM, I don't just worry about the corners. If you can find anyplace in a square you occupy that can get a LOS (line of sight) to any part of a square occupied by an enemy, you have LoS (not total cover). Whether it is 3/4 or 1/2 cover is a judgment call based upon the way we've described the cover more than the number of corners you can target. I might even treat 4 blocked corners as cover. For example, if a monster is behind a thick bush, I might still treat it as 3/4 cover.

I would think the "any corner" example is the right one and half cover.

I was looking at the pictures and seem to notice that the PC square can only see one of the 4 squares so 3/4 is not seen and 3/4 cover to make things easy. Then you would need to do math for huge and larger creatures though.

I tend to just have disadvantage to attack around corners and such, but should have 1/2 and 3/4 cover more in my games.

For things like columns and such on a grid, I either have square columns or only allow you to occupy squares with 3/4 the space available. In this case, only the corner squares and not the sides.

Funny, I use cover (and elevation that asks as cover) all the time in my games and I have actually drawn lines to check the degree of cover less than a handful of times since we started 5E (well, used the measurement sticks I made for movement since my players hate counting boxes and I hate diagonal boxes counting the same as horizontal/vertical).

Usually, as DM I just eyeball it and announce how much cover there is. Using actual 3D terrain pieces helps, but that is a relatively new thing to my gameplay - so we handled it as I describe above for years (including previous editions) without much worry.

Thanks all for the replies so far. I am interested about more input.

The DM gets to pick any corner. The example DM has picked a corner that will give +5 AC. Another DM, or the same DM in another circumstance, could chose to pick a different corner.
Also, it's really a cube, not a square, so you may be able to shoot over party members heads, thus negating cover, when you are fighting a Giant or other taller monster, if you can trace a line from your cube to a cube of the giant that does not pass through the cube of a blocking person or object.