It’s not the last of Critical Role (obviously) but it is the end of their second campaign this Thursday. And it’s 7 hours long! 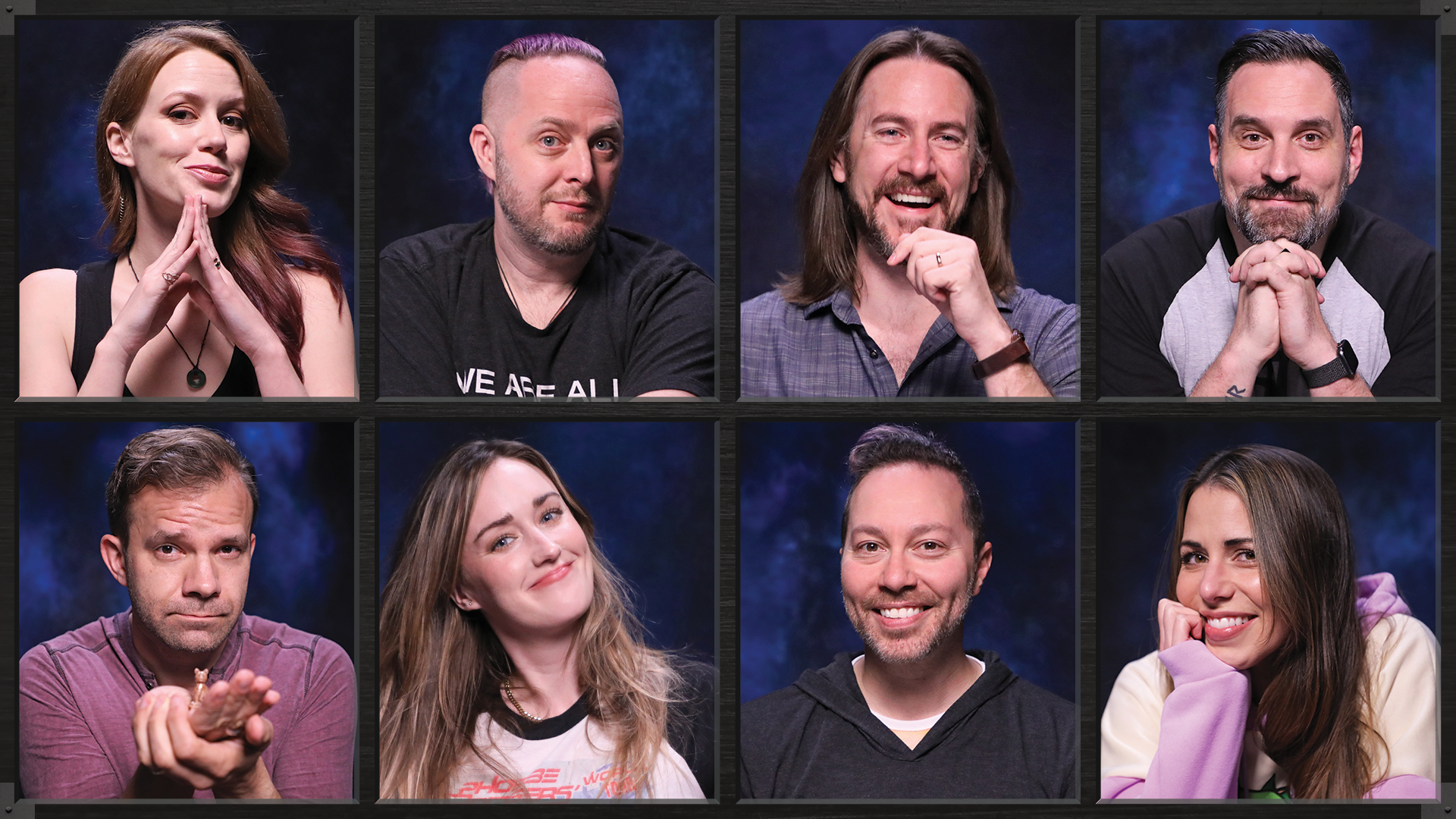 Since the launch of the campaign on January 11, 2018, Critical Role has chronicled the story of Jester Lavorre (Laura Bailey), Yasha Nydoorin (Ashley Johnson), Caleb Widogast (Liam O’Brien), Beauregard "Beau" Lionett (Marisha Ray), Nott the Brave/Veth Brenatto (Sam Riegel), Fjord (Travis Willingham), Mollymauk "Molly" Tealeaf and Caduceus Clay (both played by Taliesin Jaffe) of The Mighty Nein as they explored Wildemount, formed relationships, spat in the face of death and buried allies, realized that not all goblins are as they seem, discovered the power a friendly cupcake (sprinkled with some Dust of Deliciousness) can have in befriending powerful foes, and showcased the resiliency one can have in the face of insurmountable odds time and time again.

Experience the final chapter of The Mighty Nein as Critical Role concludes the legend of this ragtag group of miscreants that millions across the globe have come to know and love. How will their journey end and what’s next from the world of Critical Role? Tune in to find out!

The final episode of Critical Role’s Campaign 2: The Mighty Nein airs this Thursday, June 3 2021 at 7PM PST simultaneously on Twitch (twitch.tv/criticalrole) and YouTube (youtube.com/criticalrole), with the replayable VOD of the show available on Critical Role’s YouTube channel the following Monday.

Critters…. How do you want to do this?

I wonder what characters they will run next time?

hopeless said:
I wonder what characters they will run next time?

I can see Travis going with a fighter or rogue. He doesn't seem to like tracking spells and likes to beat people down. A blood hunter might also work

Laura might drift to warlock. She loved being Jester but seems to want something simpler. An artificer might also be fun, working with her hoarding impulse

Liam might drift to being a cleric or related healer. He's good at managing spells and is the kind of player who would take that role to save another player from it. A nerdy lore bard might be interesting, but that might not be emo enough

For some reason I'm picturing Taliesin as a paladin

Sam is the wildcard. He's unpredictable. But a barbarian would be very different. Or a wild magic sorcerer just to **** with Matt

Now Marisha has gotten her punchiness satisfied she might drift to a sorcerer or wizard. Seeing a dwarf for some reason

Ashley will play a character. They will be quiet because that is Ashley. A sneaky character like a halfling rogue or ranger might be her playing to type

overgeeked said:
I’m very hopeful they will be in Marquet. Love me some Arabian Nights.
Click to expand...

Didn't Taliesin run a dragonborn Paladin originally before playing Percy or have I mixed up their characters prior to the C1 stream?

My current picks for the group for campaign 3 would be:

Laura - Elven druid (Circle of the Shepherd). This will give her a lot of ways to explore her creative side. There are a lot of untapped spells for her to use in new ways, and the summoning could give her a battlefield full of Trinkets.

Sam - Minotaur barbarian or paladin - the biggest, and most vain, medium creature in existence (contrast, and perfect for Sam).

Liam -Warforged Battlemaster, the tie to the 2E campaign (As Jester and the Traveler were tied to campaign 1 subtly) - who will struggle to decide between recreating the world he once knew, Aeor, or embracing the world that is.

Ashley - Human College of Whispers Bard - giving her a chance to be sinister for a change. I really think this could be an amazing choice for her. It would be a great expansion and would capitalize upon sides of her she has not brought to the game, but that we've seen elsewhere.

Taliesin - Glasya Tiefling Ranger (archer) that multiclasses into Order Cleric and Sorcerer (Divine Soul) - A believer that Good and Evil do not matter (as they are not real things) and that Asmodeus just wants what Asmodeus is due for his part in the Blood War. Despite having tieflings, they really have not explored the Diabolic part of Matt's world. I know he 'just' played a Tiefling, but it was abbreviated.

Marisha - Hobgoblin Cleric of Order - and she'll center her story around ending the Curse of Strife to free Matt's world from lore that they likely regret.

You'd have Liam and Sam together on the front lines, playing off each other, with Marisha there for support. The second rank of Taliesin and Ashley would be flexible and interesting to watch (with a lot of meat to influence story). Laura and Travis in the back of the party slinging spells and being disruptive would be interesting to see, as well.

I just hope the leaked feywild book is either out or comped to CR so they can use any PC option from it they like. A main cast rabbitfolk or owlfolk or frogfolk character in CR would be amazing. Might be too whimsical for Matt though. If the slide from light to grey to dark morality holds, C3 might be an evil PCs campaign or a grimdark campaign.

Matt has said (repeatedly) that he wants the players to play whatever they want, and will build the game around the PCs they create. If Sam shows up with a Grung Old Spice Gentleman and seriously wanted to play it, Matt would make it work.

If Sam keeps up his current trend he will play what Liam suggests, as I believe he did with Scanlan and Nott/Veth.

Ashley: Fighter (Rune Knight) or Rogue (Phantom) hopefully. For some reason I see Bugbear?
Marisha: Wild Sorcerer or Wild Barb (basically anything chaotic that potentially has a bang …or a pop)
Sam: Gnome/Grung (something small) Illusion/Enchantment Wizard (Back to spells and trickery)
Liam: Human Knowledge Cleric (A very giving player and a detective)
Laura: Satyr Eloquence Bard (She enjoys F%&*$ing with people)
Travis: Shifter Blood Hunter. (Werewolves!)
Taliesin: Aberrant Mind Sorcerer (He Likes that stuff) Although I could see him going Clockwork

So no chance Ashley might run a Psi Fighter?

hopeless said:
Didn't Taliesin run a dragonborn Paladin originally before playing Percy or have I mixed up their characters prior to the C1 stream?
Click to expand...

Orion Acaba was Tiberius Stormwind, dragonborn sorceror. That might be where the mix up is.

Ashley needs to play something funny. She has a great sense of humor and rarely gets to show it, since she plays such serious characters (Damien and Late C2 Yasha are great examples of her humor).

Its time for Liam to play a cleric.

Sam already has his character (picked by Liam again).

No one of their original video's talked about what characters they played prior to their first campaign got serious.

No, Taliesin did play a Drsgonborn Paladin prior to being Percy, way before they streamed. We know very little about the character.

I want to see Sam do something big, like a Minotaur or Goliath, and Travis play something smaller: Travis played a Goblin in the Shadows Over Mordor one-shot while Sam was a Troll, and it was amazing.

Didn't Liam play an evil aligned Cleric in a one shot?

hopeless said:
Didn't Liam play an evil aligned Cleric in a one shot?
Click to expand...


Jayne Merriweather, a charming young lady from a long line of clerics of Tharizdun

BRayne said:
Jayne Merriweather, a charming young lady from a long line of clerics of Tharizdun
Click to expand...

Or possibly Lieve'tel from Search for Grog. Though I can't remember if she was evil or not.

Matchstick said:
Or possibly Lieve'tel from Search for Grog. Though I can't remember if she was evil or not.
Click to expand...


Nah she wasn't evil, just kinda salt in the wounds as a character

Iry said:
Ashley needs to play something funny. She has a great sense of humor and rarely gets to show it, since she plays such serious characters (Damien and Late C2 Yasha are great examples of her humor)...
Click to expand...

The College of Whispers bard could be great for her to use her singing voice, as well as be funny and sinister all at the same time. It would be a chance for her to really spread her wings and get into the meat of the party interaction. She was on the outside as Pike due to her absences, and Yasha missed so much time and was a bit of a longer most of the campaign.

It is decidedly hard to pick a great choice for Laura as she is so good at making the most of everything. I'd love to see her play an artificer, a summoning spellcaster (Circle of Shepherd Druid?) or an Illusionist as I think she would be insanely inventive with how she uses their core abilities. I personally think her interest was peaked when Liam made up spells for his wizard in this game, and she wants to try her hand at some creative spell creation.

D&D General Critical Role Campaign 3 on Marquet! And the premier episode to be in Theatres!
2