For those hoping for a new D&D cartoon, Critical Role has just launched a Kickstarter for an animated show based on their livestream campaign. It broke a million dollars in about an hour, and has 45 days left to go... 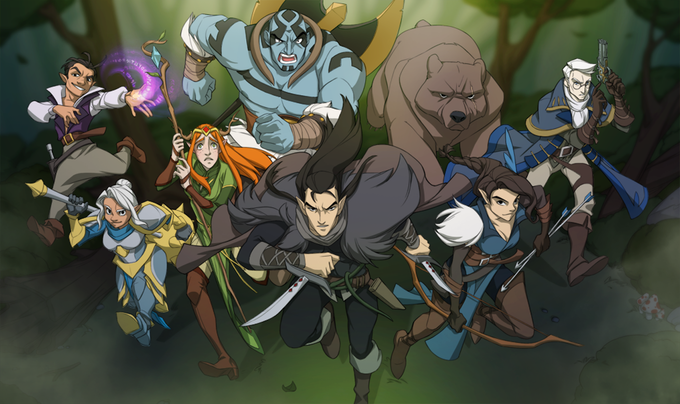 What is the next, action figures by Hasbro, a videogame?

It sounds like they approached some Hollywood producers about this project, but didn't like the offers they received and turned to crowdfunding instead.

The Kickstarter Page said:
Travis & Sam went on dozens of Hollywood pitch meetings, and found some interest — but we ultimately decided to create our first animated special on our own. By doing so, we can continue to stay true to our beloved characters and tell the stories you want to see. With an ever-burning desire to bring a Vox Machina animation to the masses, we decided to give the power back to our amazing community, roll up our sleeves, and make this special with YOU instead.
Click to expand...

I don't want to read too much into that, but given how quickly it was funded on Kickstarter....well. At the very least, it makes me wonder if those people in Hollywood fully understand CR's target audience.
Last edited by a moderator: Mar 4, 2019

They are over 2 million dollars Canadian, or 1.6 million USD. And climbing fast, at this rate they could out do the Veronica Mars movie.

Still what would they do if they did get say 73 million dollars, I mean that is summer blockbuster movie level money with less expenses? How many times can they add 22 more minutes before it turns into a TV show?

Staff member
Kicktraq is always wildly inaccurate for the first week. It’ll settle down its prediction to something much lower in a few days. It simply projects the day’s pledges and assumes the same number every day, but Kickstarters don’t work like that .

Could this be the DnD movie we always dreamed of?

Man, that little money wheel is screaming. They could make a whole series to rival the original D&D cartoon. Does Matt look like Dungeon Master, or is it just me.

Do they even have the legal rights to do a D&D movie or could this end up in the courts? I mean I can't see Warner Bros. Being okay with this or Hasbro if they aren't getting a cut of the money.

gyor said:
Do they even have the legal rights to do a D&D movie or could this end up in the courts? I mean I can't see Warner Bros. Being okay with this or Hasbro if they aren't getting a cut of the money.
Click to expand...

gyor said:
Do they even have the legal rights to do a D&D movie or could this end up in the courts? I mean I can't see Warner Bros. Being okay with this or Hasbro if they aren't getting a cut of the money.
Click to expand...


They don't have to use the D&D name, hell they could make the characters OGL and base it off Pathfinder.

Mostly I think they will do their own thing and file the edges off so the name D&D doesn't appear anywhere. The cartoon can just be about the adventurers doing whatever.

I’d be surprised if they weren’t talking to WotC to make the whole thing work. Licensed material included or not.

Considering WotC is promoting the Kickstarter on the official D&D twitter account, I'm guessing one way or another, all legal & copyright issues are taken care of.

I'm really excited for this! Plus, several of the stretch goals are some really interesting one-shots, so that's extra bonus to tide us over for the year and half it'll take to make however many episodes get funded.

At 1.95 Million now. That counter is just churning.

Edit: Wow okay. From the time it took me to look at the time, and then read through to the second page and type in my comment, it had made another 10k.

Couldn't happen to a nicer bunch of people though. I am so happy for their success!

Staff member
$2M incoming! This is hypnotic to watch! I need to tear my eyes away! Looks like Matt Colville's record is about to be broken.

Two million dollars and fifteen thousand backers, all in just a few hours. Neither counter seems to be slowing down, either.


They want to make a D&D movie, Hasbro owns the rights to D&D and Warner Bros. Licienced the movie rights as I understand it.

They have passed the 2 million dollar USD mark and are still shooting higher.

You know it is kind of crazy, the average support runs over $130 per person...