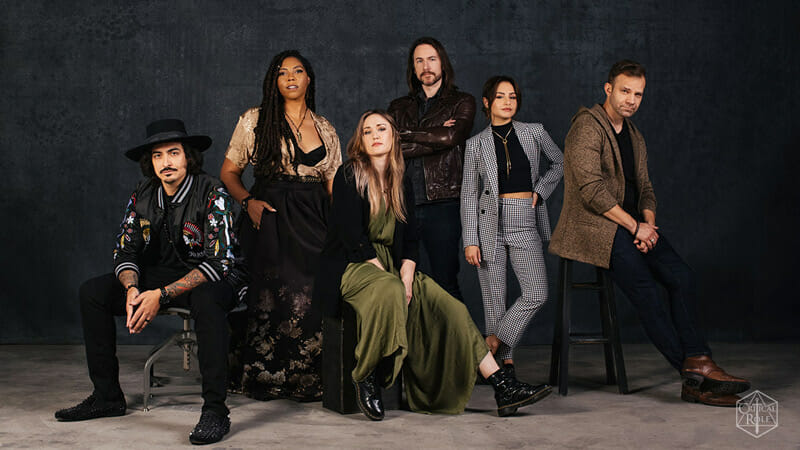 "Exandria Unlimited is the newest eight episode mini-campaign brought to you by, and existing within, the same world as Critical Role. Following a fresh-faced and freshly formed crew of characters, this adventure begins in Emon, a city still recovering from the scars of the Chroma Conclave attack nearly 30 years later." 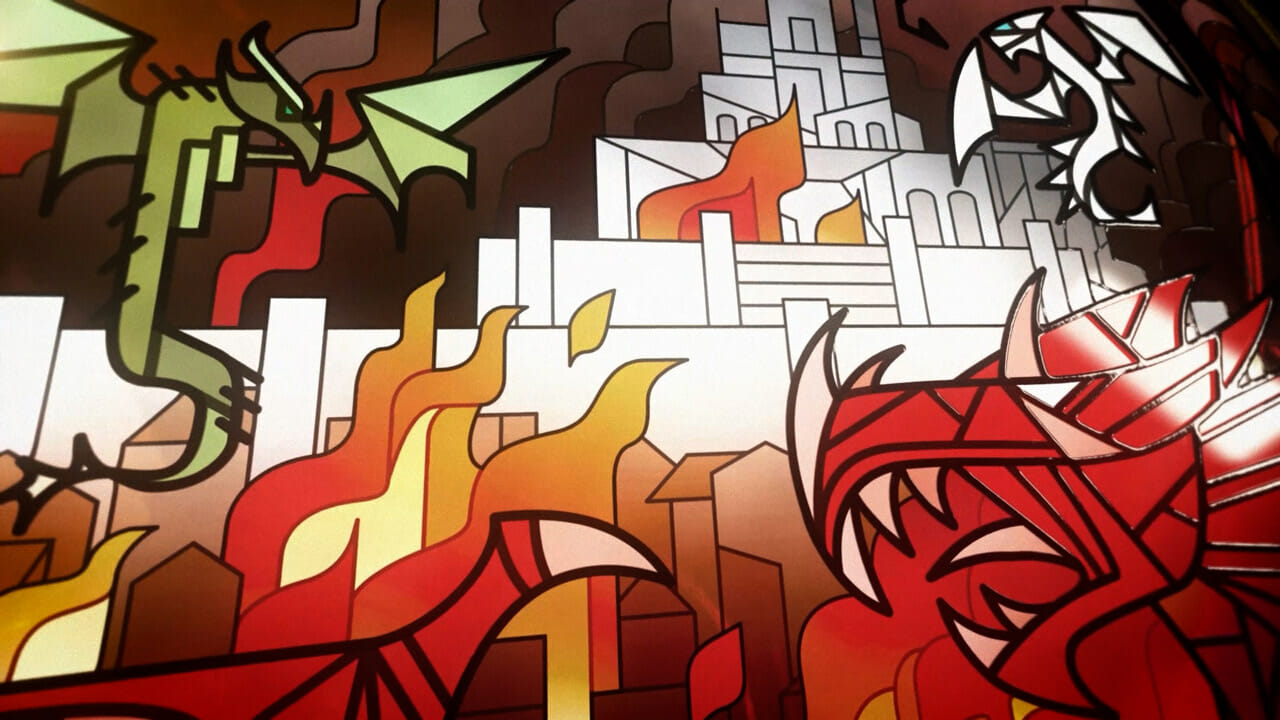 What You Need to Know Before Watching Exandria Unlimited | Critical Role

The show features Matt Mercer (as a player not DM), Aabria Iyenger (who will be the DM for this show), Aimee Carrero (who currently plays She-Ra), Robbie Daymond (voice of Marvel's animated Spider-man), Ashley Johnson (co-founder of Critical Role), and Liam O'Brien (also from the main Critical Role show).


I am so hyped for this! i would think they use game master because the person running the game has control of what happens, if they get rules wrong, or want to change things.they might want to say "i know you random twitter person do it this way, but our game master does it their way" as just a slight comeback to everyone that says they are doing their fun wrong.
it's probly better for just generalization and the fact they are more a roleplay game then a dungeon delve game.

Supporter
Seems like a very smart play by the CR team. Showcase an apparently stellar GM, use “Matt as a player” as an additional hook, and give their channel some content while the core group regroups and Matt has some time to get a starting scenario (and initial big bad threat) worked out for campaign 3.

A bit surprised there wasn’t a subtitle as this also seems like the start of a great program of substitute content.


Morrus said:
Yes. As I said “DM“ is not a trademark. Trademarks are very specific. You have to apply for - and pay for - each one.
Click to expand...

My point was that for official advertisements and press releases, they probably tried to avoid trademarked terms
Which extended to abbreviations
Cause if you're using "game master" a bunch you're not going to abbreviate it as "DM"

"Game master" is used a lot more on critrole.com than "dungeon master"
Even "dungeons & dragons" and dungeons and dragons" are only mentioned a dozen times

darjr said:
Here he calls himself Dungeon Master way back in 2016 on geek and sundry

But they titled the show "GM Tips." So, not anything new.

R_Chance said:
What you mean no one has trademarked "DM"? I mean Direct Message / Direct Messaging (DMing) is so important in social media...

Sorry, I couldn't resist. We all have a jargon that applies to our jobs / hobbies and we assume everything relates to that.
Click to expand...

I don't like that Private Messages has changed to Dungeon Masters. Whenever I see DM I am often initially confused about why people are talking about D&D for a few seconds until my brain catches up.

Lycurgon said:
I don't like that Private Messages has changed to Dungeon Masters. Whenever I see DM I am often initially confused about why people are talking about D&D for a few seconds until my brain catches up.
Click to expand...


In the world of civil engineering, the "DM" is the project's Design Manager. So I can relate to the confusion...it's been years, and my brain still glitches for a second or two whenever someone asks me to "check with the DM about the tunnel."

CleverNickName said:
In the world of civil engineering, the "DM" is the project's Design Manager. So I can relate to the confusion...it's been years, and my brain still glitches for a second or two whenever someone asks me to "check with the DM about the tunnel."
Click to expand...

Especially since you should really be checking with the dwarf.

I don’t envy Aabria for the big shoes she has to fill, but I am excited to tune into the first show.

Strange speculation on Sam as hes probably one of the more enthusiastic players and loves jabbing Matt . I don't think hes missed more than 1 or 2 total sessions in combined campaigns

I'm glad its sometimes prerecorded with comments off

Lycurgon said:
I don't like that Private Messages has changed to Dungeon Masters. Whenever I see DM I am often initially confused about why people are talking about D&D for a few seconds until my brain catches up.
Click to expand...


I hear you there. Whenever a friend asks me to DM them, I typically start a message with "You are alone in the dungeon. Drips of water can be heard in the distance while a breeze oozes around the room. You see a passage to the east, and a door in front of you. You think for a moment and remember that you need to get some milk and hamburger while out. What do you do?"

CleverNickName said:
In the world of civil engineering, the "DM" is the project's Design Manager. So I can relate to the confusion...it's been years, and my brain still glitches for a second or two whenever someone asks me to "check with the DM about the tunnel."
Click to expand...

Well there could be anything in that tunnel. Trolls, dragons or even the dreaded gelatinous cube! Of course we need to check with the DM.

You're confronted by someone who looks like an elven Gwendoline Christie.
"Okay, who moved my shrine?" she asks you glancing around the cavern.
Behind her is an ornate little shrine of partly asian design.
Its now you notice the growing roots of the tree that extend into the ceiling above where a hole shows the glimmer of moonlight in the open skies above it.
She sighs turning to face the shrine she extends her hand and clicks two of her fingers.
In response a portal opens and beyond her you can see the eternal summer of the Feywild surrounding what looks like the remains of a small temple.
She walks through.
What do you want to do?

Also, there are a lot of other videos out there with dungeon masters ... but the context is quite different.

Marc Radle said:
Why (would anyone leave Critical Role)? They are all friends and business partners - why would you think someone is leaving? And what makes you think it would be Sam?

Seems like you are kind of wildly speculating here based on ... I’m not sure what ...
Click to expand...

The lack of stating they'll all be back for Season 3 after we see a 'change in cast' in the form of EXU, as well as at any point before it, is a little suspicious. Not terribly, but a little. However, Sam, specifically, has shown signs of fatigue and conflicting interests.

Don't get me wrong: The man has had fun at the game, but of all the people there, he has been the one that treated it most like a professional engagement. He makes character decisions in the game to serve the campaign story more than to play his character's story. He's discussed this on Talks Machina, and you can see it on stream when he holds back. He looked disappointed when Veth's healing curse was discovered before it killed Veth, for example.

Additionally, he has a career out there that is in conflict with Critical Role's time demands in a different way than the rest, and a home life that he clearly values and wants to focus on. He has had more business side activity than the others on Critical Role in his industry. He talks about family a lot, and Veth's storylines seemed to hit real close to home. Telling a story in which a parent does something they want to do with their friends at the expense of their family at home - that included the death of a child as a result of the parent's choices - was not exactly motivation for him to continue.

I'm not saying it is a done deal, or that it would be forever, but I could see Sam not starting with the group at the start of Campaign 3. I could also see it for a few of the others as they take a break to focus on other issues.

We should consider that at the core, this is still a D&D game. Many players need to take a break at times, especially when other parts of life take up more of your time, but sometimes just because you need a break from gaming.

GMMichael said:
So, does "Unlimited" refer to the number of PCs? Because eight episodes sounds limited to me.
Click to expand...

This is going to be the first of a number of "beta" games. I'm betting it is limited so that they can evolve what they're doing for the future. Whether some of these people may replace existing players in Season 3, or if they'll have a beta game that is entirely new people that runs for a full length, or something else, this is the trial run. There will be more EXU in the future. I think any game not run by Matt and taking place in Exandria will get the label of EXU.

official terminology aside, to non gamers or novice gamers, I would argue that game master is a much more approachable term than dungeon master.

Anyway that aside, I’m interested in this more so because it is a predefined duration. I never got far in other critical l role shows beyond a cursory episode or two because it was an uncertain time commitment, and so this way I can say I know I’ll be in it for the 8 depisodes.

anyone know if they will podcast this ?
(I would presume yes like the other series but behind the scenes business stuff could be different)

They will podcast it, with the podcasts available the Thursday following the video.

Regarding time commitment - I listened in the car, on mass transit, and when doing the few parts of my job that are brainless things in queue to be automated. I've listened to most of campaign 2 twice, and campaign 1 twice. I only stop to focus on it in depth at key moments - and usually there to study how Matt built the suspense, changed the mood, dropped hints, dealt with a player problem, etc... It is not exactly something you need to dial in on every moment.

SehanineMoonbow said:
It'll be interesting to see Matt as a player. I'm looking forward to C3, ultimately, but this is bound to be entertaining.
Click to expand...

I highly recommend the Sagas of Sundry Dread game where he's a nerdy high school kid and Taliesin is the drugged out punk bully.
Also... this Careful. He drops an f-bomb.

Oofta said:
Well there could be anything in that tunnel. Trolls, dragons or even the dreaded gelatinous cube! Of course we need to check with the DM.
Click to expand...

CleverNickName said:
Nah, it's never anything that interesting. It's usually a clearance issue (because the tunnel is like 2 cm too narrow) or a budget issue (because building a tunnel is super-expensive).
Click to expand...

But what fell sorcery narrowed the tunnel? And did they explore cost savings for tunnel construction via charming a purple worm, using disintegrate, hiring a few apprentices with mold earth, or the use of a Sphere of Annihilation?

CleverNickName said:
Nah, it's never anything that interesting. It's usually a clearance issue (because the tunnel is like 2 cm too narrow) or a budget issue (because building a tunnel is super-expensive).
Click to expand...

B
Critical Role: The Mighty Nein – The Nine Eyes of Lucien Review

Wednesday at 4:16 PM
brimmels
B

Sep 28, 2022
Hexmage-EN
H
B
Critical Role: Call of the Netherdeep Review Round-Up – What the Critics Say