Alex Kammer of Gamehole fame, the convention and the wonderful museum of every TSR D&D product and game room also has a copy of the D&D 3.0 Style Guide!

Interesting parts include the 3 million active monthly players, the primary and secondary target audiences, the list of "do's and don'ts" and cursing!

The primary audience was college students ages 18-24, with a secondary audience of young people form 13-16 and adults 25+.

"Dos and Don'ts" include "do show monsters as fearsome, evil creatures. They're not misunderstood--they're EVIL!", and "don't show the game being played by children or pre-teens". 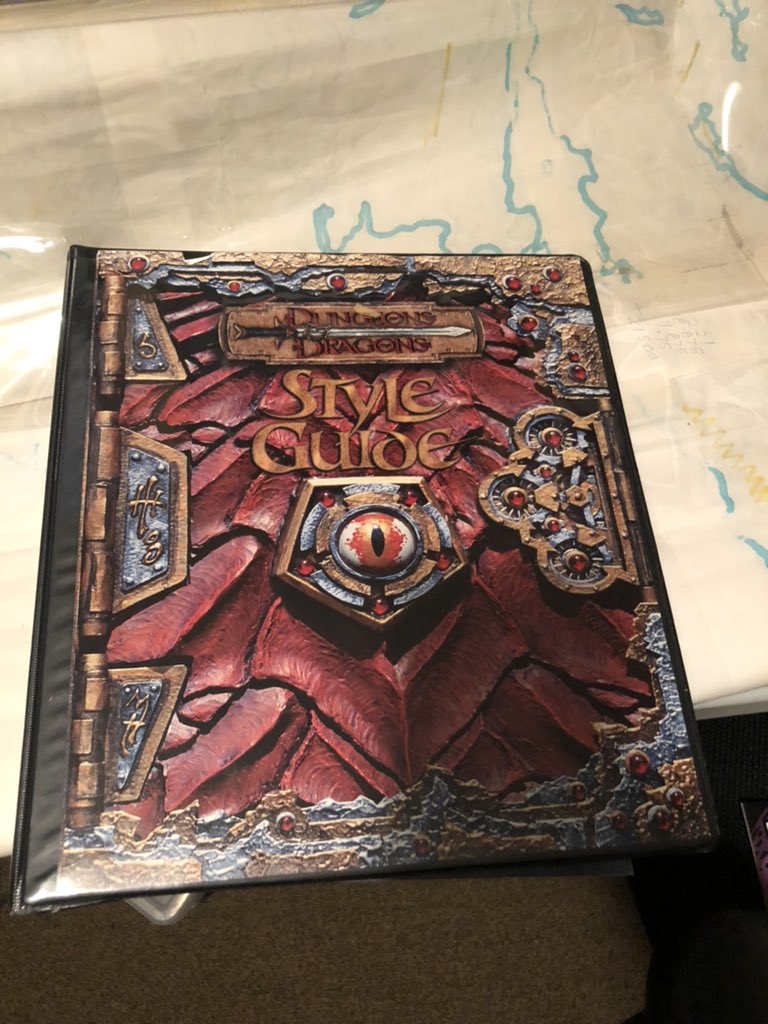 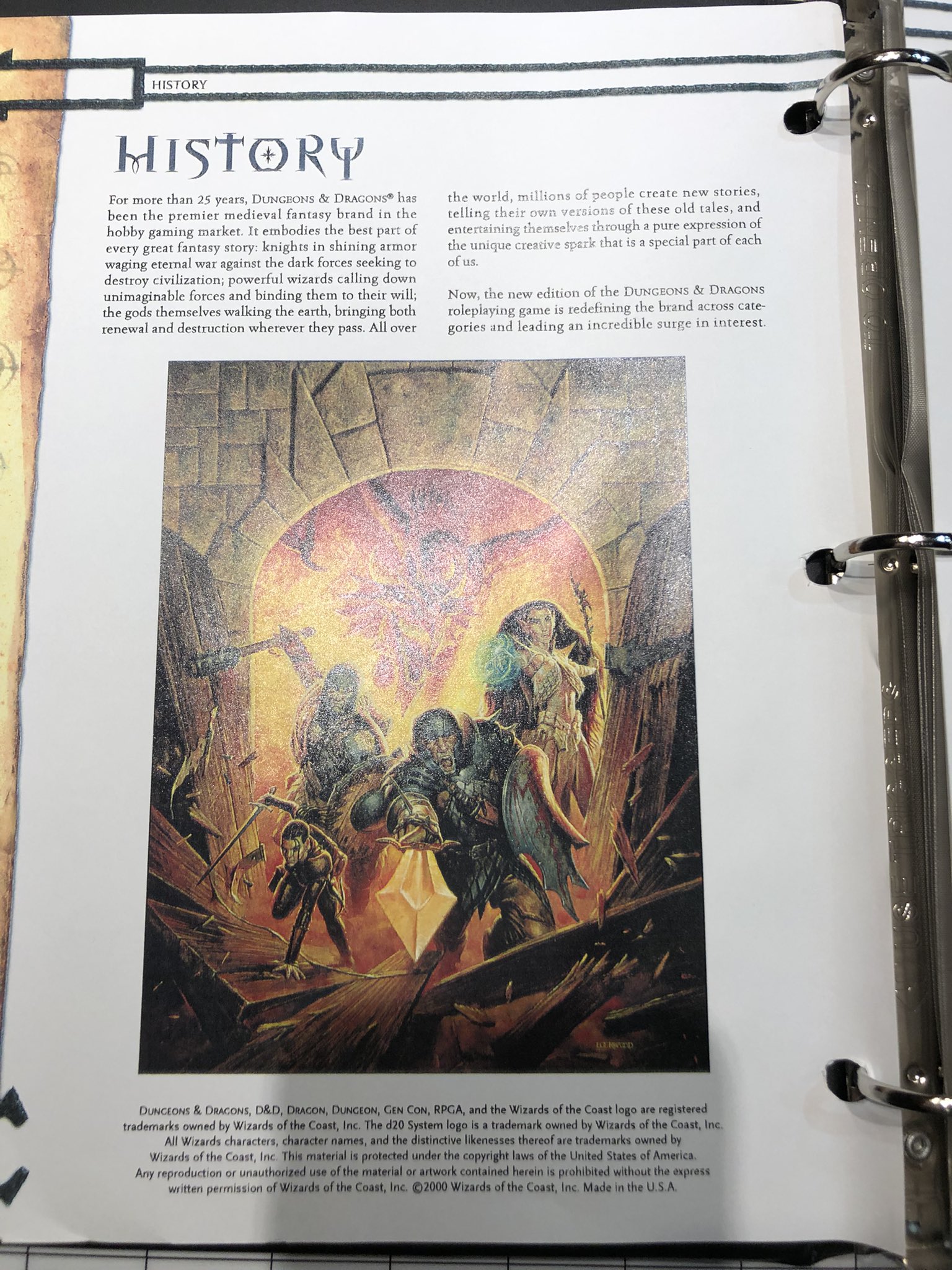 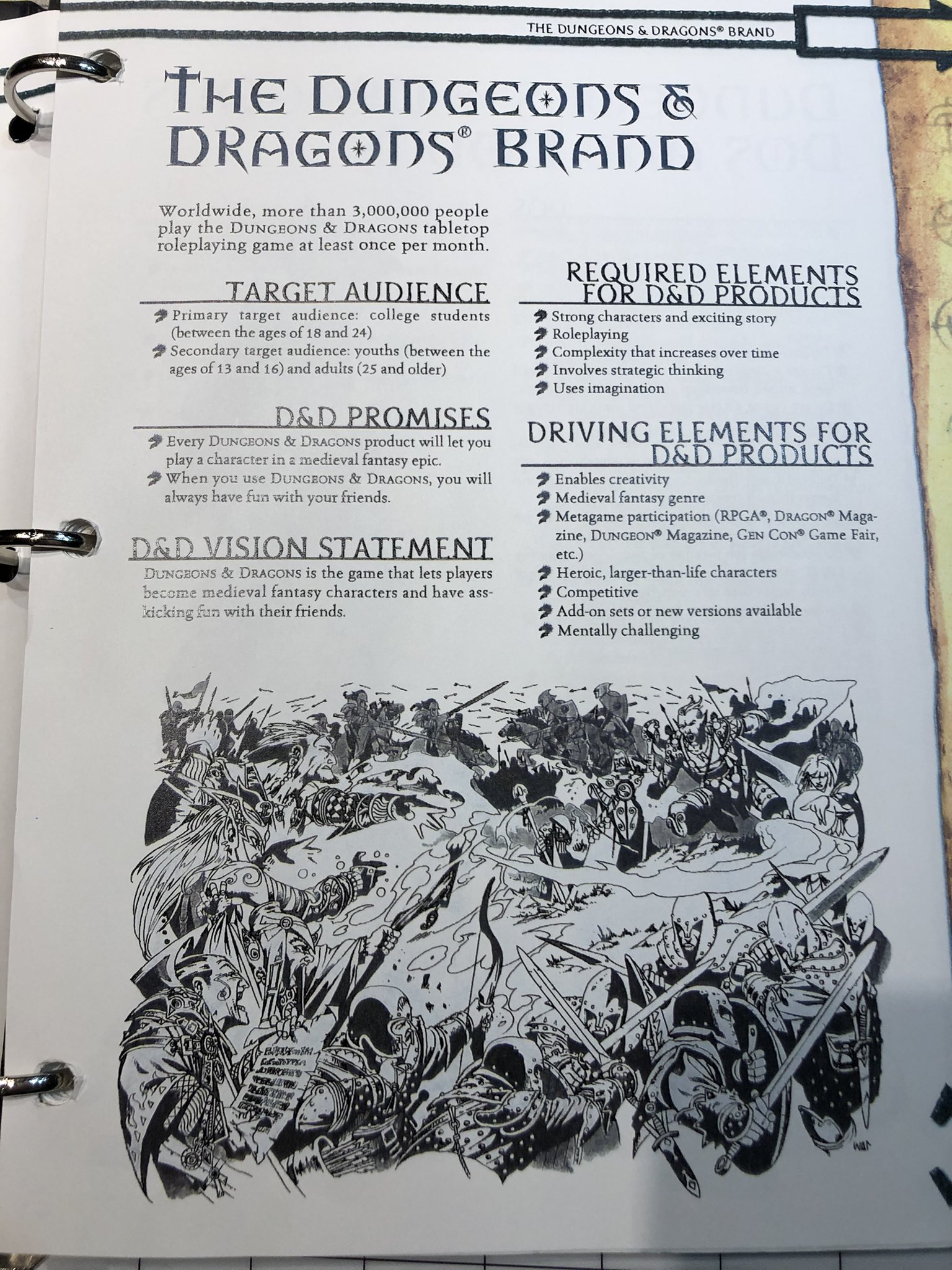 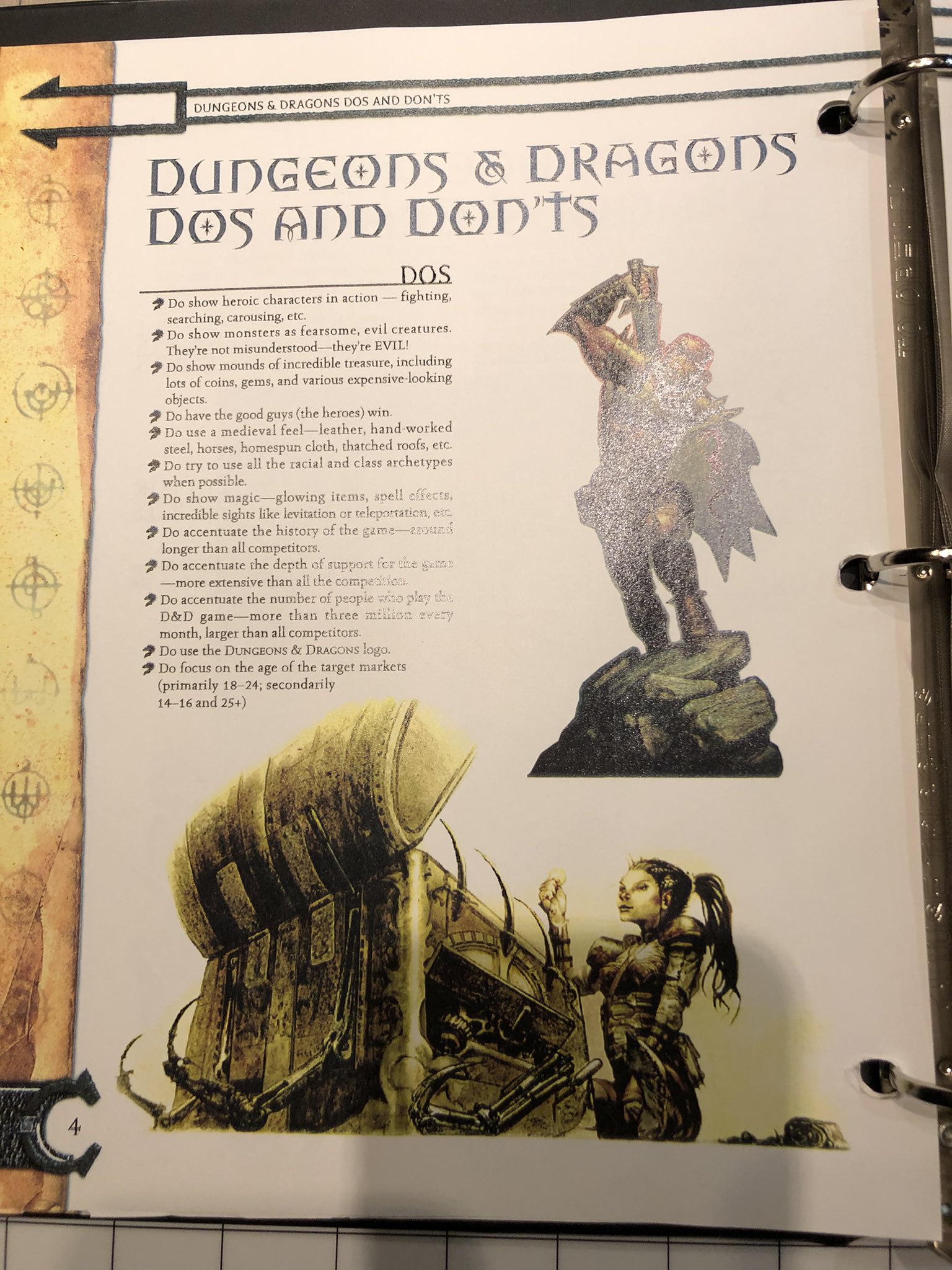 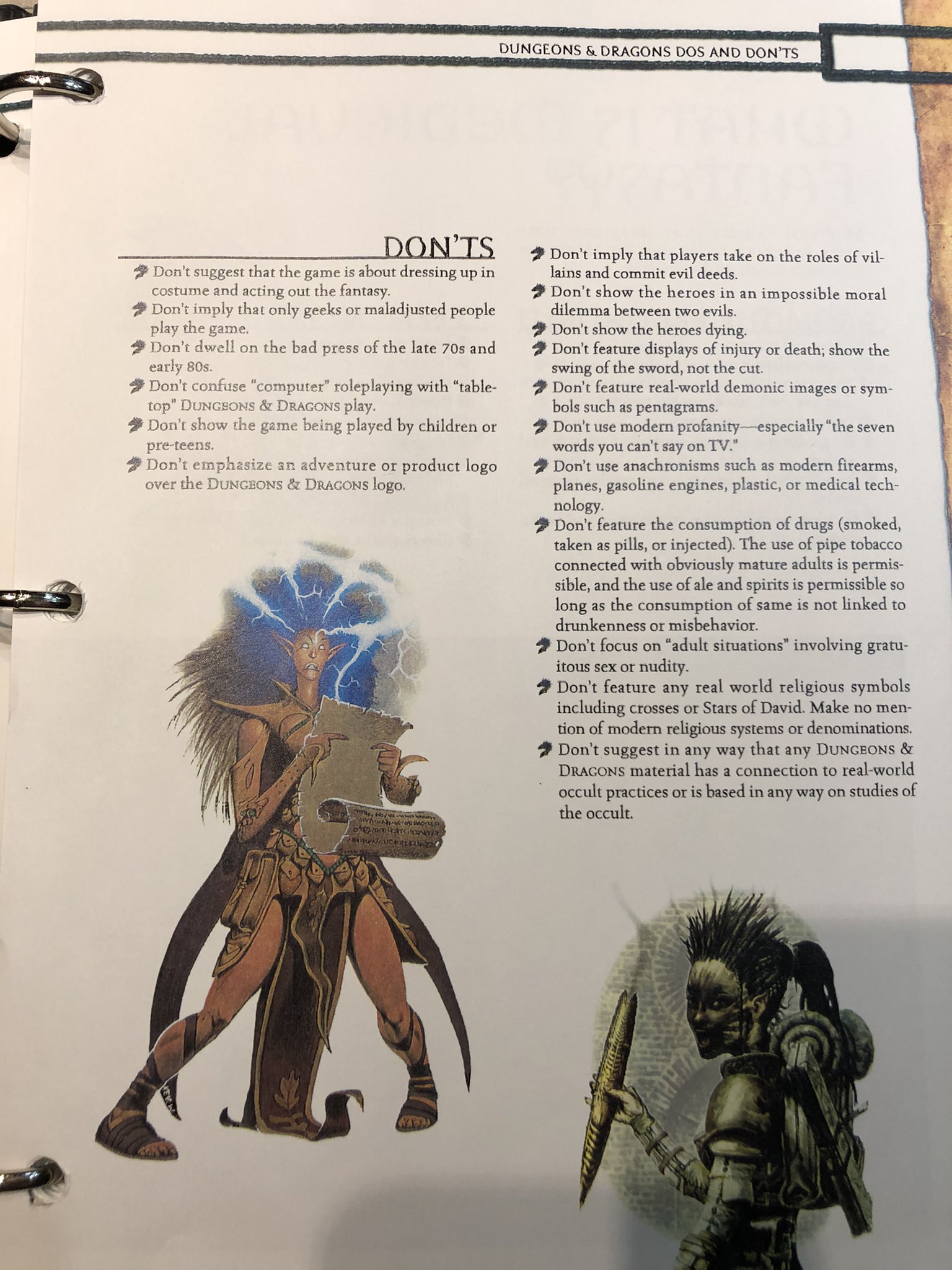 “Mentally challenging” as a driving element is interesting, and seems especially characteristic of 3e to me.

And it shares the Monstrous cover. I can't unsee some of those bullet points

"Do show monsters being fearsome, evil creatures. They're not misunderstood--they're EVIL!"

The fact this was the second "Do" implies this was something they were really emphasizing then, possibly due to prior internal friction over the matter.

It's interesting how tastes change. I used to love those books, the art, etc. And now, I find the style heavy and hard to read, cluttered, etc. Stil beautiful, but so much less compelling to use...

I'm perplexed by the fact that one of the driving elements of D&D products was: Competitive. What did they mean by that?

I can't speak to what is better or worse in terms of internal layout, but I did enjoy the covers of 3/3.5 at the time, made to look like proper tomes.

Thanks for that. Very interesting to read.

Supporter
I was 24 when the 3E Player's Handbook was published, so just at the upper end of their target audience (but I had stopped playing 6 years earlier). This art style did appeal to me at the time for whatever reason (although I dislike the 3E elf look, I much prefer the 3E halfling look to the way 5E art depicts them).

The Dos and Don'ts are quite interesting in terms of what had probably changed and what hasn't in the ensuing 21 years.

"Accentuate the history of the game and always talk about how millions of people play" is obviously still a big part of their marketing.

"Don't show nerds, geeks, and children" playing is also funny. Are there still nerds and geeks today? Or rather, isn't everyone a geek now? I guess this was still a huge stigma in 2000. WotC obviously is very keen on showing cool, attractive people playing D&D as much as they can - but they still let the occasional obvious nerd or geek be seen as well. Kids playing aren't completely censored in 5E marketing but are definitely portrayed as more of a novelty or a side bet - and you almost never see kids in their marketing images, they just show the PRODUCTS aimed at kids.

"Don't suggest the game is about dressing up in costume" - not that 5E suggests D&D is about this, but they're obviously much more comfortable with this now due to the rise of cosplay. The anxiety about it here reflects post-Satanic panic concerns. Same deal with "Don't use pentagrams and devil stuff"; they're pretty much fine with that now.

Like 1E, 5E is clearly more comfortable with the occasional anachronism than 3E was.

"Don't present impossible moral dilemmas" I think is probably still in place for official material - I'm trying to think of an official adventure that deliberately presents one and I can't. Icewind Dale: Rime of the Frostmaiden suggests one with regard to the Ten Town sacrifices but chickens out when it comes to really putting it in front of the players.

Interestingly, the Dungeon Master's Guild terms & conditions have no such injunction on moral dilemmas so you do see them in DMsGuild adventures.

Don't show drug use or drunkenness is clearly out; you do see both in 5E (although never real-world drugs).

"Don't show the heroes dying" has clearly stayed. 1E certainly did do this (the example of play provided in the 1E Dungeon Master's Guide includes the death of a PC, and Larry Elmore's rather famous painting of Sturm Brightblade's corpse with a hole punched through his breastplate comes to mind). I think every edition since 1E has eschewed it.

Nikosandros said:
I'm perplexed by the fact that one of the driving elements of D&D products was: Competitive. What did they mean by that?
Click to expand...


I think it's exactly the part that went wrong with 3e, it's really interesting to me to find it in print and in the design intention.

What I think it means was that there is a challenge, and that the challenge needs to be met. In itself, why not, earlier editions quite clearly had the challenge just to survive, but in 3e, you were meant to "win", whatever that is (whereas I was happily surprised, re-reading my Moldway, the amount of times where it says that the game is not about winning). I just checked quickly, but the part that was in most editions about the fact that D&D is not about winning and losing seems to be absent from 3e.

This in turn, for me, led to the drift of the game towards more and more supplements, more power through uncontrolled combos, DMs becoming harsher when faced with the need to provide greater and greater challenges, more and more players turning to powergaming just to survive the challenges, DMs v.s Players attitude, etc. in all everything that I don't like in what should be the worlds' most cooperative game.

I hope that competitiveness has been banned from 5e onwards, hard to be sure but it still seems like it to me.

At 17 years old must be when the typical D&D player has their Rumspringa.

Nikosandros said:
I'm perplexed by the fact that one of the driving elements of D&D products was: Competitive. What did they mean by that?
Click to expand...

My immediate reaction is to think that they want it portrayed as more of all of the other driving elements than the works of their competitors -- primarily White Wolf, at the time -- but also more than other activities, like video games or card games or board games. But the post above, from @Lyxen, might make sense as well.

I think its also important to remember WotC was redefining D&D on their own terms at this point. They wanted to define thier vision of the game and brand against the weird fluxes that was 90s TSR. This shows in what settings and books were published in that era, but it is clear the vision evolved as the years rolled on.

Hexmage-EN said:
"Do show monsters being fearsome, evil creatures. They're not misunderstood--they're EVIL!"

The fact this was the second "Do" implies this was something they were really emphasizing then, possibly due to prior internal friction over the matter.

I doubt there was internal friction over it. The issue of monsters being fearsome and evil dovetails with multiple other bullet points about emphasizing the heroic nature of the PCs and avoiding choices between evils (the classic paladin trap). They were going for a simpler moral spectrum of their presentation and that continued on through 4e at least with respect to the pre-release marketing materials. 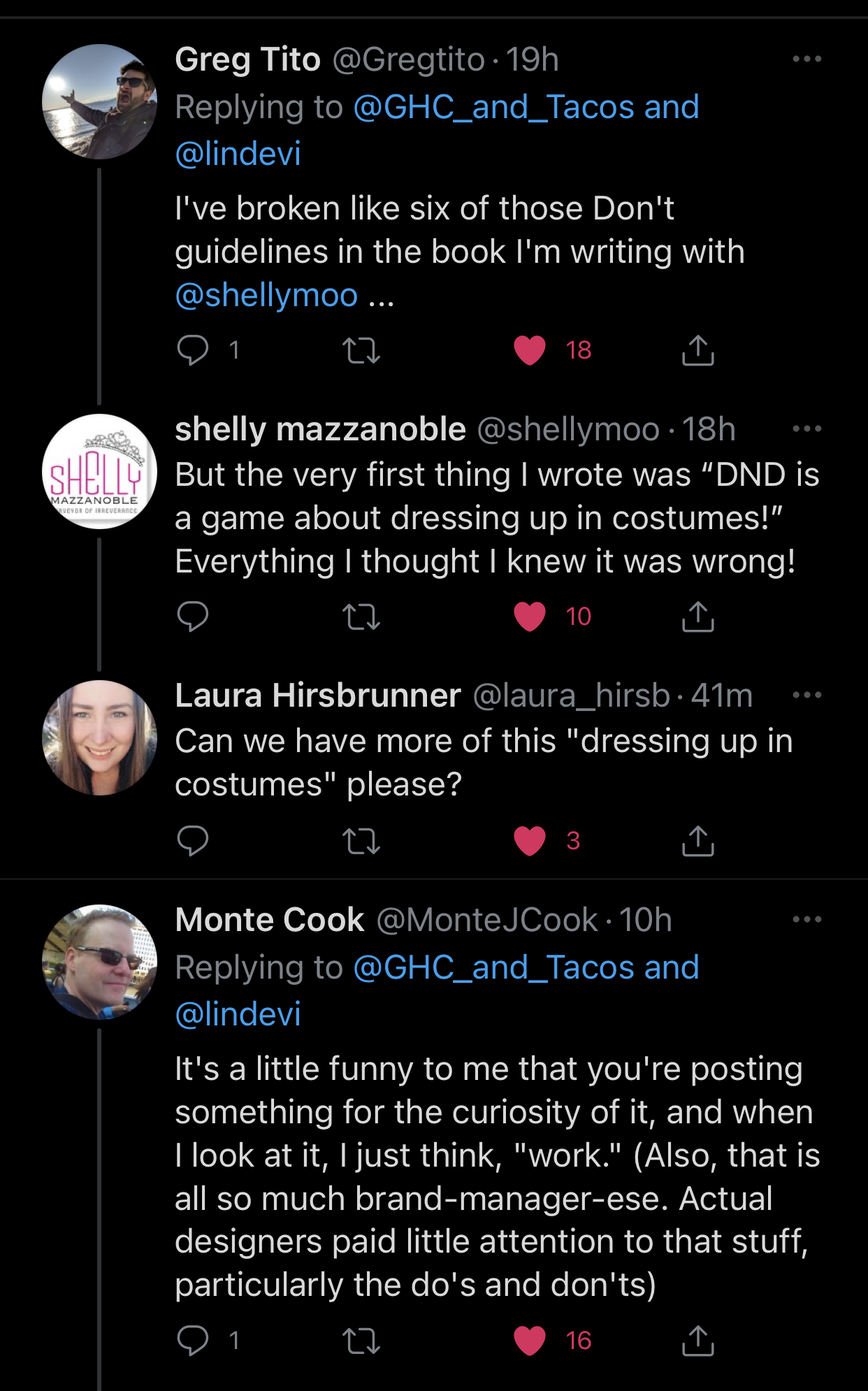 Who was this style guide for? Was this mostly a marketing thing or for product designers too?

jaycrockett said:
Who was this style guide for? Was this mostly a marketing thing or for product designers too?
Click to expand...


It would have been intended for both. According to Monte Cook, the designers didn't give it a lot of weight - but I actually think that 3E products do largely reflect the ideas in this document.