Darren Watts on Superheroes, Playtesting, and Dogs on Twitter

At PortConMaine I had the opportunity to sit in on Darren Watts' panel on superheroes in gaming. That panel merely scratched the surface of Darren's experience in the tabletop industry so I pounced on the opportunity to ask him about everything from tabletop gaming to playtesting. 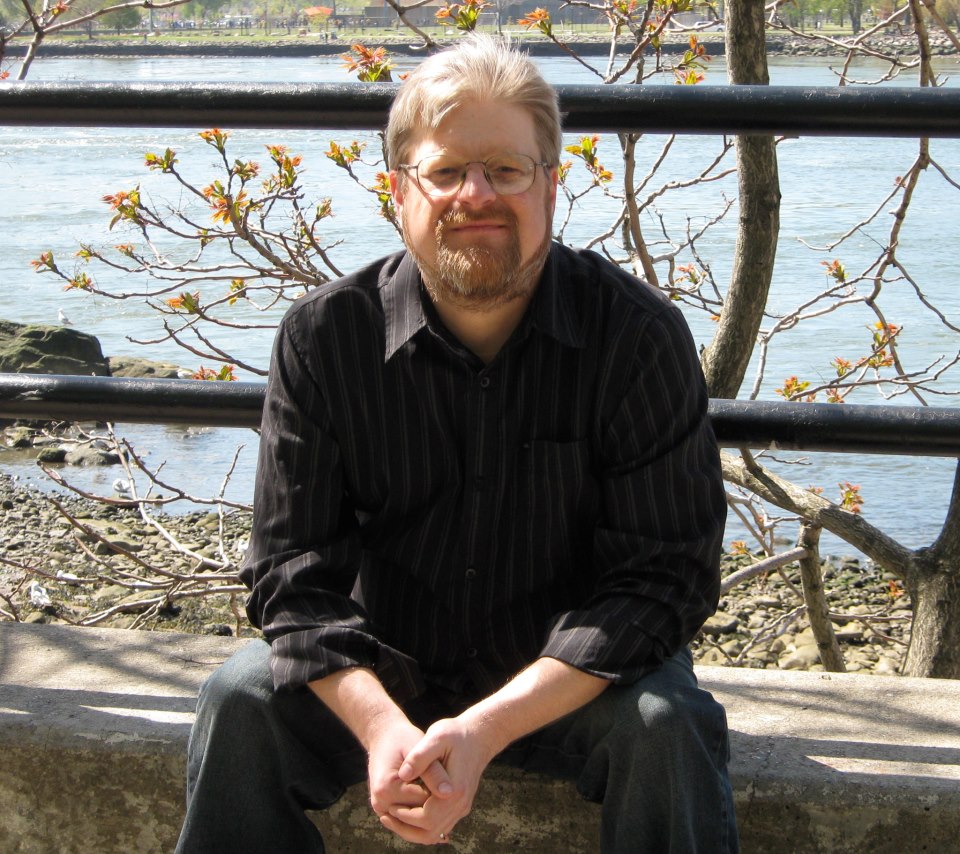 Mike Tresca (MT): Your gaming history includes being president and co-owner of both Hero Games and Indie Press Revolution. Can you tell us a bit about what tabletop role-playing games you produced during that time?

Darren Watts (DW): I was part of the group that “rescued” Hero Games out of its quiescent state in the late ‘90s, and our first product was the 5th Edition ruleset in April 2002. That was kind of a surprise hit, and I transitioned from being a part-time freelancer writing magazine articles and bits and pieces for various companies to being a full-time game publisher. In about ten years there we put out over one hundred different Hero products (Champions, Fantasy Hero, Star Hero, etc.), many of which I edited and about fifteen that I wrote myself or with partners like Steven Long, Jason Walters, and several other fabulous writers. I wrote a lot of the Champions Universe material, and I also put out several odd one-shots like Lucha Hero, our Mexican wrestling game.

We also acquired Indie Press Revolution from one of its founders, Brennan Taylor, during that time. IPR wasn’t a publisher, it was a sales collective representing dozens of small indie publishers to help get them into the market when the bigger distributors weren’t paying much attention to the indie market. We had been handling their warehousing and shipping fulfillment anyways under contract, so when they were looking to sell out we already knew their business setup and stepped in to run it. We worked with some publishers that later turned out to be pretty successful, like Evil Hat and Bully Pulpit, and we’re very proud that we were able to help them find their audiences.

MT: You shifted gears from owning to freelancing. What prompted the change?

DW: We took Hero through the Fifth and Sixth Editions, plus the Champions Online MMO, and we had kind of come to the end of a line after 100 books by the end of 2011. Most games have a sort of productive lifespan that’s pretty finite. If we were a different kind of company, it would have been time to put out a different game, but Hero was what we had come together to do – we didn’t really have another thing we all wanted to work on together. So as it was starting to slow down, it became a situation of, “maybe it’s time to retire this band and go do our solo albums while we’re all still friends.” Which I’m happy to say we are, and I’ve done a couple of products for Hero and its related sidekicks that I’m very proud of, like Champions Live Action and Golden Age Champions. But I was also ready to do some other types of games.

MT: What other licensed properties have you written for?

DW: Since leaving Hero I’ve gotten to work with other IPs and publishers, like Star Trek, Doctor Who and Sentinels Of The Multiversethat I couldn’t really do while I was running Hero and IPR. I’ve also just done the licensed card game for the We Rate Dogs Twitter account, which just came out last month.

MT: You're very involved with the Double Exposure conventions (Metatopia, Dreamation, Dexcon, Maelstrom, and the First Exposure Playtest Hall at Gencon). What's your history with those conventions?

DW: I started being a regular guest at the Double Exposure shows when I moved to New York back in 2008 or so, and became friends with the team and started doing some consulting for them because I really admired their operation. Dreamation and Dexcon were the main ones then, and I was a co-founder of Metatopia itself as a convention aimed more at designers themselves as the audience. I still run the panel and seminar track at that show, and that’s still at least partly my baby. GenCon seeing how well Metatopia worked led to us being asked to put on a mini-version of it on site at their own show as First Exposure, and that’s been a big hit as well. Maelstrom, alas, only lasted two years and was kind of a victim of the success of the Envoy program Double Exposure also runs. (Envoy provides demoers, convention staff help, marketing assistance and consulting to game publishers who don’t have or want to build the infrastructure to do that sort of thing themselves.) Because Envoy very much needed to be present and active at shows like the GAMA Trade Show in March, the timing and hours needed in the spring for those events kind of pushed Maelstrom off the schedule, alas.

MT: Playtesting is obviously something near and dear to your heart. What advice do you have for new game designers who want to playtest their games?

DW: Every game needs to be playtested thoroughly, at every stage of its development, and each stage needs different things out of playtesting. Be aware where you are in the process, and what it is you’re specifically working on or looking for out of each and every one. Good playtesters, who know how to give useful feedback and how to compartmentalize their own experience when needed, are absolutely worth their weight in gold pieces, so take the time to build your own lists. Work with conventions, go to places like Metatopia and First Exposure and other cons and protospiels, get the widest possible range of exposure. Know when you need to be there and when to let it happen without you – eventually your game has to function on its own out in the world.

MT: We met at PortConMaine during your superhero panel. What's your experience with superhero games in tabletop role-play?

DW: Well, Champions obviously is the gaming love of my life. I got my first copy for my 13th birthday in 1982 and it steered my whole life path since then, including growing up and buying the company. It was the first game that interested me in how it worked and why mechanically, and got me thinking about how to create and support different types of play. I’ve worked on a bunch of other superhero games, because I love the genre, and I’ve enjoyed a lot of them – I wrote a part of the latest Masks playset book for Magpie Games where I did a big Jack Kirby tribute, and I’m currently doing the metasetting book for Sentinels. I’m kind of an amateur superhero comics historian, so I consult on actual comics history for a lot of different projects.

MT: How has the superhero genre changed?

DW: We talk a lot about the different Ages of comics and supers – the Golden Age, Silver Age, etc. I think we’re in the early stages of a new one, after the deconstruction of the Iron Age that started with titles like Watchmen or Dark Knight. I’m currently calling it the Celluloid Age or alternatively the Silicon Age (to keep the metals theme), because comic books are no longer the primary means by which we consume superhero stories. For the entire history of superheroes, the comics were the “real” versions of the characters and the movies and TV shows were just a simulacrum of them, a flawed representation. But today, for a whole new generation, Chris Evans and Robert Downey Jr. are the real Captain America and Iron Man, and the comics are now just more stories about them, you know? Jack Kirby’s art is just a picture of the characters you know and relate to because of the movies. It’s a very different, shifting foundation and it’s interesting to see how comics are responding to that.

MT: What's the number one thing gamers need to know to get the superhero genre right in their games?

DW: Superheroes as a genre are inherently conservative, and I don’t mean that in a political sense of red-vs.-blue. I mean that one of the fundamental premises of superheroes is that the status quo is good and society is worth preserving. Supervillainous menaces are outsiders threatening a world that needs, and warrants, saving. Attempts by superheroes or anyone else, however well-meaning, to change or improve the world are dangerous and almost certainly doomed to failure. This is a very different premise from most serial RPG story types, and if the GM and players don’t all buy in to that they’re likely to become frustrated trying to fight it. “Why do we all just sit around here waiting for the villains to come up with another plan, or for somebody to rob a bank?”

This isn’t to say you can’t go against that idea, that you can’t deconstruct that concept on your own. It’s a great idea to have Superman turn his efforts to ending world hunger, or Bruce Wayne trying to end poverty and crime in Gotham City by funding pre-K education programs, or Tony Stark and Reed Richards actually succeed in creating free, clean, safe energy programs. But that changes the world, and the superhero genre relies on the world outside mostly being the same the audience lives in. So go ahead and break those rules, but do it on purpose and not by accident.

MT: What games are you working on right now?

DW: Besides the aforementioned Sentinels books, I’m also currently working with Jess Nevins and Jonathan Thompson on a 1950s cold war-era kaiju RPG setting for Savage Worlds. Basically the third bomb we dropped on Japan woke up a bunch of monsters, and now the Cold War has settled in trying to defeat and capture kaiju and master the science behind them before the other side does. The heroes all wear matching color-coded jumpsuits and carry rayguns and fly cool vehicles out of their mountain or island bases, like Jonny Quest or the Supermarionation shows. We’re playtesting that now as I learn how Savage Worlds works – I really love the new Adventure Edition so far!
Last edited: Oct 22, 2019
Click to expand...

Mike "Talien" Tresca is a freelance game columnist, author, communicator, and a participant in the Amazon Services LLC Associates Program, an affiliate advertising program designed to provide a means for sites to earn advertising fees by advertising and linking to http://amazon.com. If you like what we do here at EN World (the Forums, Columns, News, etc.) and would like to help support us to bring you MORE please consider supporting our Patreon. Even a single dollar helps!
E

Some great insights here, thanks for the article!

Podcast #198: The Controversy of "Evil Races"