For the second article, it makes sense to look at the Justice League's 2nd strongest member, Wonder Woman! 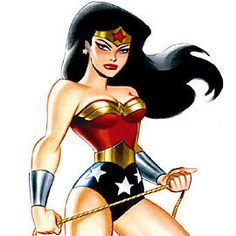 Notes on the Amazon

CR: 25. Wonder Woman is often said to be the Justice League’s number 2, right behind superman. So we give her just a slightly lower CR to account for that.

Strength and Skill: When comparing WW to Superman, she is often said to be the second strongest JL character. That said, while her strength is incredibly high, its not the “nigh limitless” strength of superman, so we will want to show that.

But what makes Wonder Woman so dangerous is her warrior skills. While Superman often fights more like a brawler (I know there are many comics that show that superman has learned tons of martial arts, but that’s not normally how he is actually depicted in fights), she is the most skilled, agile warrior there is….so this will be a key measure of the differences between them. It is often believed that Wonder Woman could beat superman in actual combat, so we want to use that as a litmus test for the build.

Speed: There is a lot of variance with Wonder Woman when it comes to speed. She is often noted as being “hypersonic”. Even the recent WW movies showed how quick she can be. But rarely is she noted as having speed feats like Superman and the Flash. So we are going to give her high tactical speed and very high agility, but not the true “insta move” abilities that they possess.

Lasso of Truth: Her most premier item. The lasso will need to incapacitate foes and provide truth forcing abilities. Now this is where we have to go dnd on the item, though in comics almost no one can resist the lasso, we will make it very difficult (but not impossible) to resist. The lasso has provided a wide and weird range of abilities depending on what era of comics, so we will stick with its most classic....incapacitation and truth telling.

Magic Sword: While WW can fight perfectly fine hand to hand, she is often wielding a powerful magic sword forged by the gods (a +3 legendary item if I ever heard one).

Immunity to Ranged Attacks: With WWs trusty bracelets, she is all but immune from ranged attacks.

High Damage Resistance: WW is extremely durable, but not in the same “invulnerability” class as Superman. We also want to showcase Wonder Woman’s tenacity, you can’t just knock her down, you have to really pummel her before you have a chance of taking her out. So we are going to pull a card from the barbarian's playbook to showcase this.

Stats: (Charisma)On the one hand, WW is a natural leader and frequently leads people into battle. On the other, there are many times in the comics where she doubts herself and her abilities, such as in the JL movie. So we are going to give her a good charisma but not as high as Superman.

(Wisdom): We are going to bump this a bit higher than Supes due to Diana’s age and experience, and her natural “willpower”.
(Dex): WW is going to be our dex leader of the JL
(Str): Just a touch below superman, with most of the difference being noted in abilities.

Bow: Though WW is often depicted as not having a bow, she is also shown to be completely proficient in every ranged weapon and will use them when she needs to. So we will go ahead and put a bow attack in her routine just to have the option. Her statblock will clearly show that she prefers melee combat though.

Not Including: Like many comic book heroes, WW has gotten some weird powers over the years, such as the ability to speak with animals or to even astral project. But these are not her common suite, so we will not include them in this statblock.

Damage Threshold: Wonder Woman is immune to all damage, except psychic damage, unless the attack or effect inflicts more than 10 hit points of damage, in which case she takes damage as normal.

Tenacity (3/rest): When Wonder Woman is killed instantly or drops to 0 hit points, she drops to 1 hp instead. At the start of her turn, Wonder Woman regains 1 use of this ability.

Resilience: When Wonder Woman rolls less than an 8 on a saving throw, treat the die as if she rolled an 8.

Warrior Surge: At the start of her turn, Wonder Woman can make a new saving throw against any effect or condition on her, if the effect allows for a save.

Fast Healing: At the start of her turn, Wonder Woman regains 30 hit points.

Superior Strength: Wonder Woman’s Carrying Capacity is 100,000, and she gains +16 to her melee damage (included in her statblock). Her attacks deal double damage to objects and structures.

Superior Speed: When performing the Dash Action, Wonder Woman has a speed and fly speed of 2,000 ft until the start of her next turn.

Peerless Warrior: Wonder Woman has proficiency with all weapons. Her attacks are made with advantage and with a critical threshold of 18-20. She has expertise and advantage on Strength (Athletics) and Dexterity (Acrobatics) checks.

Evasion: Wonder Woman suffers no effect when she passes a dexterity saving throw, and takes only half damage when she fails.

Bracelets of Submission: As long as Wonder Woman can take actions, she has total cover against ranged attacks. People standing behind her also again the benefit of this cover.


ACTIONS
Multiattack: Wonder Woman makes 3 attacks: 3 sword or 3 bow attacks. She may substitute one Sword attack for a Lasso of Truth or Punch attack.

Lasso of Truth: Melee Weapon Attack: +16 to hit, reach 15 ft., one target. Hit: Target must make a DC 21 charisma saving throw (at disadvantage) or become grappled (escape DC 21) until the lasso is removed. While grappled, the target is incapacitated, restrained, and must answer any question asked with a truthful answer. Abilities that remove conditions do not work against this effect. Wonder Woman cannot use this attack again until the target is released from the grapple.

Offensive CR 25. We are going to assume that the always advantage part of her attacks gets her an extra +3 to hit. So with that and her base sword damage it gives us a CR 25. We could include the extra crit range but that's a small damage bump to Diana's arsenal, so we will leave it be.

Defensive CR 25. This ones a bit trickier. I am using "Resistance" to account for the high Damage Threshold. CR calculations do have an entry for the relentless ability, that functions similar to tenacity at least in effect, and 30 regeneration is also accounted for by the book. This gets us up CR 24....and I feel the amount of Tenacity she gets, plus the fact that she can recover them every round....should get us at least to a CR 25.

I added in "Warrior Surge" for Wonder Woman. Though she is not as resistant to conditions as Superman is, she is still pretty resistant, and I didn't feel the current scenario gave her enough condition resistances. So this gives her a lesser form of Superman's ability to shrug off conditions.

Her sword does bludgeoning damage?

Worrgrendel said:
Her sword does bludgeoning damage?
Click to expand...

Good catch, I will fix.

Would be possible a DC alternate universe where superhumans aren't too powerful? Level of tree-jumper wuxia fantasy, but not mountain-destroyers as in Dragon Ball. A "else world" easier to be adapted into videogame without worrying too much about the power balance, where a wuxia Batman or Green Arrow could defeat a "kaiju" version of Doomday.

That's great but I am mentally still iconically stuck in the seventies where she was more hero and less goddess (in both live action and animation) and her third big item was not a sword but a random see through plane.

Voadam said:
That's great but I am mentally still iconically stuck in the seventies where she was more hero and less goddess (in both live action and animation) and her third big item was not a sword but a random see through plane.
Click to expand...

Yeah I love these write ups but I think they are even more fun if the essence of the character can be distilled into more like a playable D&D silver age character. In the very early stories wasn't her super human strength derived from her belt?

I agree that taking a leaf out of super hero games and distinguishing strength affecting attack rolls from lifting capacity is a good idea. You can preserve flavour without breaking the game.

Dialling her down to say Open Hand Monk 10 / Champion 6 might work? So I would say attuned items being her bracelets (like monk deflect arrows but effective against all attacks until the start of her next turn and protecting those within 5 feet); lasso (like hold person with a zone of truth), and girdle of stone giant strength which triples lifting capacity.