Good luck with the online gaming, congrats on the inspired mannequin prop, and thanks for the refresher on the party.

And yeah, Pathfinder combat gets kinda crusty at mid- to high-level. I ran a campaign up to 17th level, and eventually got good enough at winging the minutiae that I radically simplified my statblocks. Foes were basically labeled one-rounders, three-rounders, or bosses, and I'd often pre-write specifically what interesting dramatic things they'd do each round, caring more about memorability - and about creating interesting dilemmas for the PCs - than about whether it was 'correct' according to the rules.

Full agreement there. I'm sure most systems get really weird and unwieldly around the high level mark. Not only are the PCs sitting on what could be average-to-large amounts of wealth, they're probably also more established in the setting with allies and other NPCs. The entire system of GMing gets a lot more abstract in order to keep things interesting.

Usually by the time one of my groups reaches a higher level and challenges start to become trivial, I contact a couple military friends I have who play a ton of Warhammer 40k and delight in the gritty mechanics of tactics. I give them the stat blocks, what the likely environment is, and any relevant information.

"Okay, here's a sheet for a level 20 halfling wizard. You also get this dragon, couple of storm giants, some other minions too. The party should be 25% wounded by the time they reach your sanctum. You've beeing scrying on them for months, so you know these are their most used spells and tactics."

Odds are very likely I'm going to do the same thing with this campaign once it truly gets to reach those absurd regions of broken-physics and superheroish capabilities.

Making a good fight is a challange sometime, but my group and I enjoy the high level fights. My players optimise well above the base assumptions for any module I have used so I always redesign encounters with different stats to increase the threat. A particular challange in this campaign is that a lot of fights are one offs which lets the pc's Nova so you need even stronger threats.

If it is useful to you I can probably provide Hero Labs files or PDF's of many of the later encounters with my upgrades.

I have aimed for that as well. Fewer encounters, but allow the players to explode all their awesome abilities all over the place. Makes for more memorable encounters. Plus, modules are really kind of loose guidelines. No two parties will tackle it the same way.

In the coming months, I'd be curious to see the PDFs of what you drew up. The party is hitting their combat capability stride. They had their buttocks whomped repeatedly in the Ziggurat of Apet so long ago, but these days they can handle 5 large mobs with CR 12 NPCs as a "moderate" challenge.

Good thing hitting them right in the ethics and philosophy bypasses all challenge ratings and equipment.

Let me know which encounters you are interested in and I'll track down what I have and put them in a shared folder people can access on Google Drive. At the moment I have stuff for books 6-9 , and will add the later stuff as I get to it.
Some of the particularly weird npc's did not get a formal rewrite as fitting them into Hero Labs was too much pain , they just got pencil notes (Nicodemus and Tinker Oddcog spring to Mind)

I'd be curious to see regarding book 6, since that's what I'm doing the most prep for at current.

The current thing I'm working on is the replacement to the railroad challenge mini-game. Not getting rid of the railway race entirely, but instead of allocating resources and stuff, more dealing with the myriad problems involved with such an ambitious project.

That, and as soon as I read that they are being sent somewhere to help with building a railway... I immediately thought "I need to totally rip off The Ghost and the Darkness here". Probably a couple advanced dusk kamadans with some weird abilities.

Odds are I'm going to remix the Keepers of Cheshimox thing into kind of a The 13th Warrior style story, with lots of misdirection about what the true nature of the assailants are.

I used the minigame but more to frame the problem for the players, in practice their schemes and problem solving won them the competion and the minigame just formalised it.
As my players ended up with a pre-emptive attack on the Keepers of Cheshimox and beefed them up enough so that they were dangerous in a stand up fight against the pc's . I believe I put a Lich in charge and some sort of Eskimo Skeleton creature.
Ripping of the Ghost and the Darkness does sound like a good idea , bit not one I thought of, the dusk Kamadans look a bit weak but they are smart enough for a few levels of Barbarian on top of the advanced template , or maybe Rogue if they are going to ambush a lot.
Otherwise I boosted Lya and her henchmen, Pembertons daughter and boosted some of the Gnolls . I will look for the files tommorrow.

My files for book 6 are in
10RegLsCLOxLCSYqctgBoEc10VmuKk2K2

The stats for Pemberton are there just in case I decided on a TPK for fun
Let me know if the link works I seem to have problems with it but it is hard to tell for me. Linking to the folder does not work, so I will try something else tommorrow
Last edited: Apr 17, 2020

Andrew Moreton said:
My files for book 6 are in
Click to expand...

EN world forums auto-translate links to google drive to... something that doesn't work. Try inserting spaces in the link or using link shorteners.

Thanks Hirou. I assumed it was a mistake by me and would have wasted time looking for it

If you take out the spaces at the beggining and before Kk2k2 the link works.

Oh man, thanks @Andrew Moreton for that drive link. Super appreciative of the work you put in.

After a few months off to readjust our lives, my players and I decided to make some lemonade to this and will be moving to a biweekly schedule instead of monthly. Might even keep it up once the world returns to normal.

So the team rushes together and gets their briefing to locate Oddcog, have a small huddle where they decide how covert they choose to be... and decide there's no reason why they need to disguise themselves to start with.

The party got pretty caught up in the protest going on, each one taking a scarf to show their support for some cause or another before eventually walking square into the ambush at Melissa Amarie's location.

Diagram A: Wasn't the best set up, still getting used to this internet gaming thing, but overall worked solidly.

Everyone was super excited for a ninja ambush and the brawl spilled out into the streets. Before Rush could make his escape though, he became the target of a couple high roll firearms crits. Firearms in Pathfinder get nasty especially for a 9th level group that recognizes a recurring antagonist and go full nova at first sight.

Given the circumstances, the party decides that the intrepid journalist would be safest somewhere else and knows a friend where they could lay low. Not a revolutionary or anything, but a concerned citizen with an outspoken view of corrupt politics who lends editorial aid to aspiring critics.

Dr. Basch kept his backstory pretty close to unknown to the rest of the group. In it, the name "Gregori Basch" is an alias. He had to change his name because his father in Risur was a highly outspoken Voltaire-esque critic of both the Clergy and the Fey and the Risuri government's relationship with them. This lead to him making some slanderous accuasations and becoming the loser of a resulting duel, and "going into exile" in Ber. The son changed his name in order to join the RHC, causing further friction between them. They haven't seen each other in about a year, and even the last time ended tersely.

Naturally... the reliable mentor Melissa reaches out to for aid is Dr. Basch's father. The downtime setup was to juicy to ignore.

We left the session there, as I want to work out the relationship with the player of Dr. Basch before digging further into that roleplaying.

In hindsight I wish we'd had more budget for cartography, to make digital gaming easier. Maybe the next adventure I write....

You know what, the work is still pretty darn good all things considered. The original consideration for this adventure certainly lends itself well to actual table play where a lot of encounters can be done via theatre of the mind. Online has been a whole different animal because maintaining visual interest and keeping encounters clearly described is some of the most important things.

Art/Cartography budget on these adventures looks like they were spent on the right places. That kind of thing can get expensive fast, as I've learned from both finding art to commemorate dead characters in my campaigns, as well as getting maps composed for a one/two player Dark Souls-esque online-friendly adventure. The wallet can sure take a beating quick.

Given much consideration to what will be the next adventure you orchestrate?
Last edited: Thursday at 1:39 PM

For the 5E setting book, I've got two options: a murder mystery in the renovated von Recklinghausen manor (with a mix of 'Clue' and 'Ready or Not'), and a political crisis in a remote corner of Crisillyir that's inspired by Casablanca.

Both of those sound pretty interesting. If I can be of aid somehow, shoot me a message.

The group gathered at the vineyard of Marcelo Duplantier (Dr. Basch's father) discussing students protest and the general culture of Ber so that they could get a better understanding of the political climate before moving to intervene on the trial of Brakken. Dr. Basch assumed a disguise, with the intent of being a firsthand witness with a statement contrary to the accusers... but upon seeing the circle of brimstone which compels truth... he promptly claimed "wrong courthouse" and backed out. Det. Goodwyne and Mikkel both stepped up and gave very impassioned answers about the character of Brakken and his intentions.

Upon hearing rumours of El Extraño along the Road of Monuments, the party is damn near obsessed with learning more about this secret badass. Cool title? Spymaster? No one knows what he looks like? If it wasn't for the time crunch the felt they were under, the session almost spiralled into trying to find and recruit this guy.

That time crunch came in the way of the most over the top ambush they had ever experienced in the way of enormous carnivorous lizards. 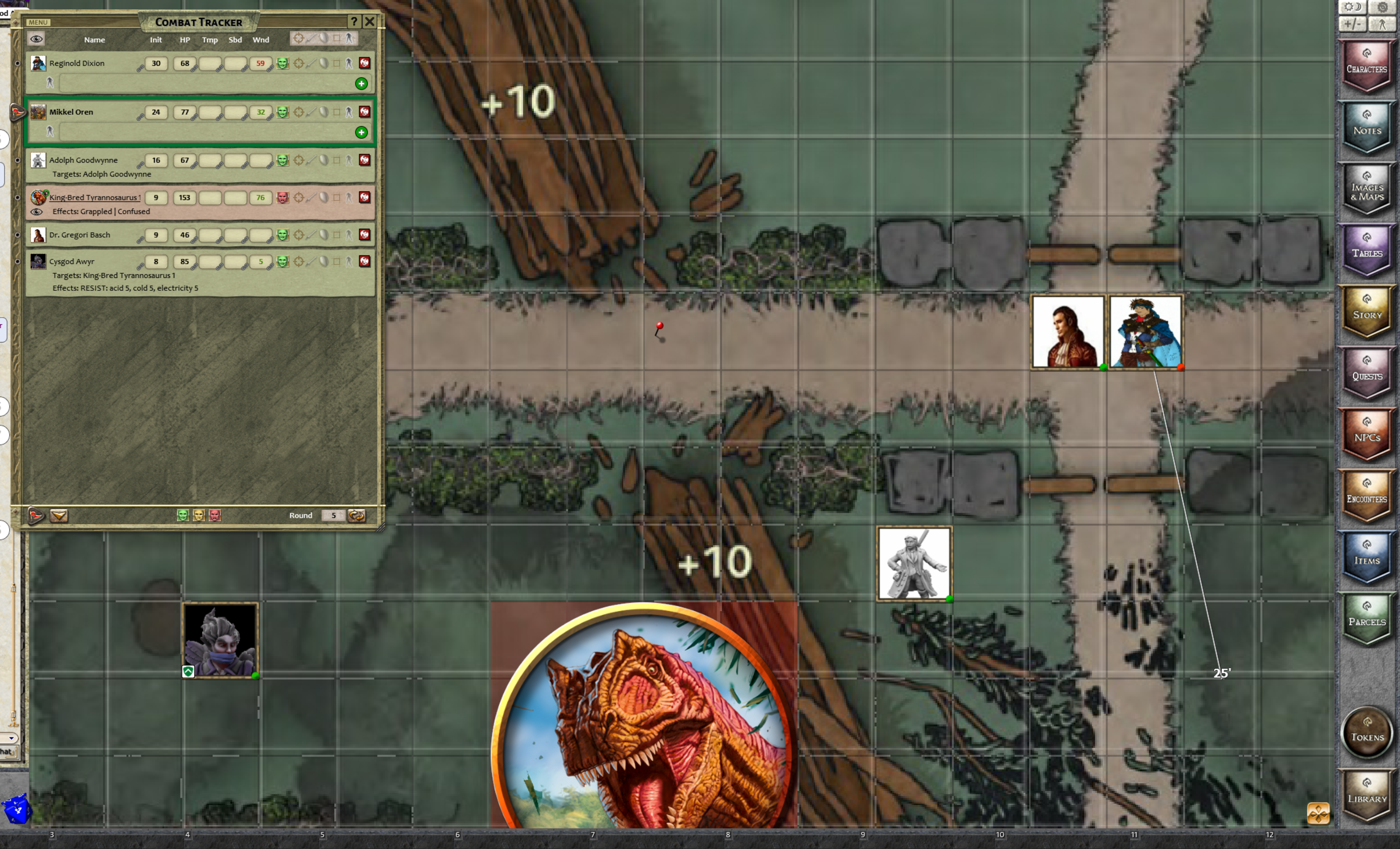 Diagram A: Dinosaurs are really big.

The party only just barely survived, mainly through clever tactics of staying outside of the range of the lizards while Dr. Basch used every mental spell he could to panic or confuse them.

Game concluded with Mikkel taking a deep breath and saying "Okay, credit where credit is due... that was a way better ambush."