Welcome back to another PAIZO PRODUCT REVIEW! First on the docket is part one of the Devastation Ark Adventure Path: Starfinder Adventure Path #31: Waking the Worldseed! 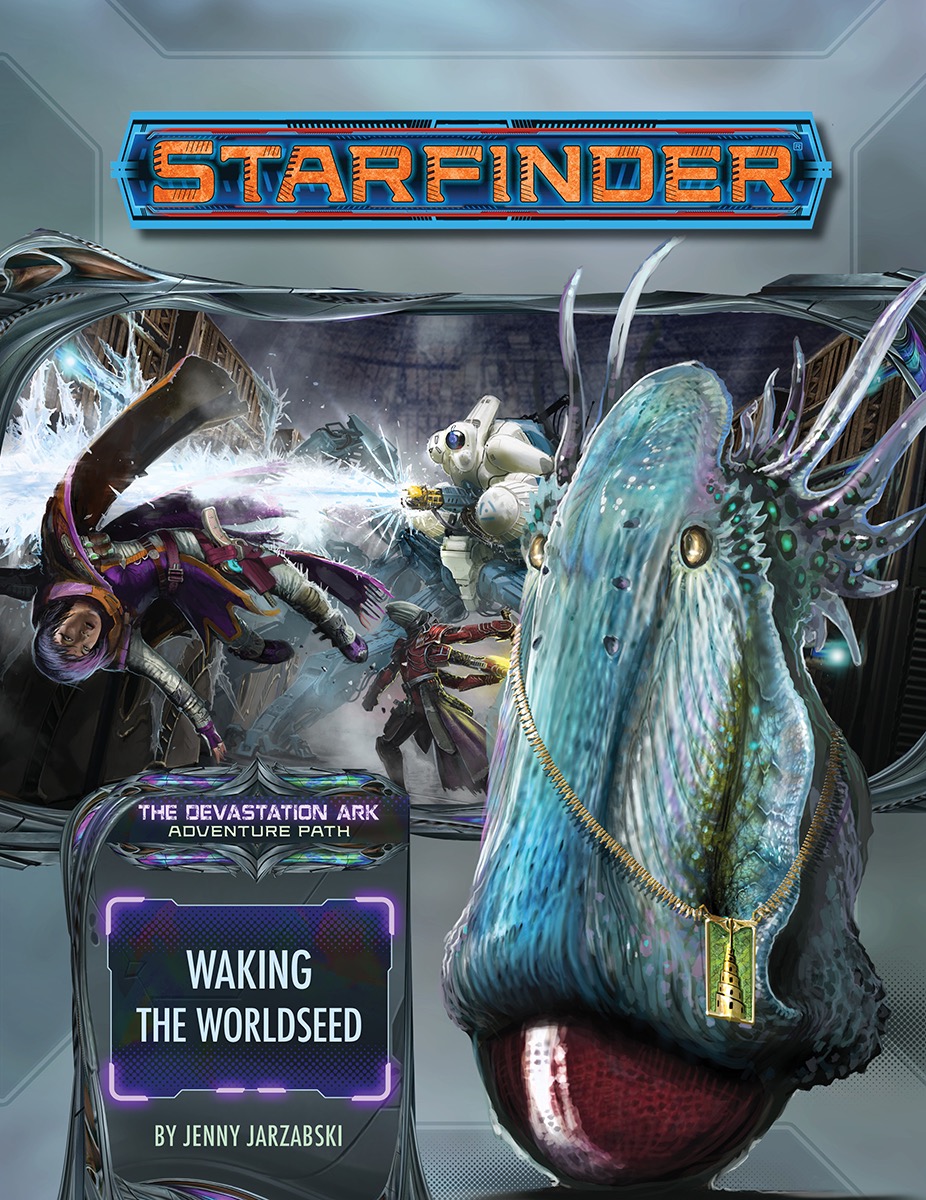 Waking the Worldseed is a three-chapter adventure for 13th through 16th level play that focuses on the unique bantrid species and their mysterious homeworld. Given the general dearth of high-level play support one tends to find in TTRPGs, seeing an AP start at 13th level is a refreshing change of pace. In addition, higher-level APs allow groups to continue the stories of characters and parties built in other APs, and Waking the Worldseed earns points right off the bat for making use of several of the previously-published Starfinder APs as foundation for possible plot hooks. Please Note: This review contains spoilers!

Part 1 of the adventure gets your intrepid heroes to the wintry planet of Jedarat, introduces the handful of important NPCs, and pays off part of the hook that brings the party planetside.
I have some minor quibbles with the usage of space here – I don’t particularly know why it’s important to roll for days of Drift travel or waste time with a botched landing attempt if there isn’t an apparent time limit for the characters’ actions. The botched landing redeems itself in part because it ties in thematically to the horrible blizzard Jedarat is experiencing, the blizzard and the cause thereof being this module’s nifty way of hand-waving away higher-level parties’ attempts to just fly or teleport to the problem site. You’re on an ice planet, you’re going to deal with crevasses at least once!

The “dungeon” encountered in part one also earns points because of its circular, nautiloid layout and for the option to start learning an ancient language. While learning the language will certainly be useful for characters in this AP, the hedge wizard in me can’t help but be delighted to add yet another otherwise-useless tool to my belt. This dungeon also starts a trend I noticed in the AP of a liberal use of traps and hazards – and be warned, the ancient civilization that built these ruins did NOT mess around when making death traps. Everything caps off at a delightfully obtuse ancient supercomputer, and while I appreciate that the ultimate challenge of the dungeon is a series of difficult skill checks instead of a boss fight, it’s a little hard to take seriously when “just break it” seems to be an equally valid conclusion with little to no consequences later down the line.

Part 2 of the adventure kicks off with some in-atmosphere dogfighting! INJECT THIS TOP GUN STUFF DIRECTLY INTO MY VEINS! Full points for the person who came up with this section, I want to see more turbocharged dogfighting in every Starfinder product from now on.


Segueing on to Part 2’s dungeon, we see a return of the same sadistic mind who designed Part 1’s hazards and death traps. Bring a 10-foot pole, people – in fact, bring a whole bunch, and some gaffer tape. The other encounters here are slightly lackluster compared to some of the weirdness found in Part 1 – conveniently, everything here is mindless and fights to the death. I also can’t help but notice that once again, the dungeon caps off with another string of technical skill checks – and while the adventure doesn’t specifically say so, this one could probably also be solved with a liberal application of Big Rock or High Explosives. Something to aggravate your GM with when you get there! That dealt with, Part 2 ends with the characters getting to enjoy some delightfully alpine R&R, and I highly encourage silly skiing or ice-skating antics for which your GM will need to make up rules on the fly.

Part 3 shows off some of the best highs and lows of the adventure. The NPCs you’ll meet in this chapter are simply delightful and full of character, offering plenty of opportunity for both straight roleplaying as well as clever use of abilities and skills. The traps and hazards in this section make the AP go 3 for 3 in terms of deliciously vicious and unique ways to cause problems and damage.


There’s even some choice environmental description as you dig deeper into an abandoned space station and discover a burning supercomputer room. On the other hand, we see a return of some nonsensical time markers. If there isn’t a time limit, why do we need to know how long travel takes? If the characters are likely immune to the environmental factors, from any number of sources, what does it matter that failing skill checks imposes a time penalty? There’s also a section header that refers to “Event 2”, but “Event 1” takes place all the way back at the start of Part 2 – I kinda thought there’d be some cohesion within chapters for that kind of thing.

That’s about it for the main adventure story, so it’s time to move on to all the extra bits crammed into the back of these APs. There’s a fine collection of new monsters to try out – my favorite is the homage to Tarantino’s Death Proof or Steven King’s Christine. I’m also tickled by some of the little gems tucked away in the Jedarat gazette. Someone on the design team is a fan of a certain old-school dungeon, and they get a tip of the hat from me for sneaking in a fun, devastating toy from that dungeon.
Well, that’s that for Waking the Worldseed! A fun little adventure with some devilish (or should I say daemonic?) surprises and solid ties to what has come before and what is yet to come. I’m looking forward to the next chapter. See you then!
Last edited by a moderator: May 6, 2021
Click to expand...

Please prefix this review with SPOILER. Way to ruin the adventure without it.

imagineGod said:
Please prefix this review with SPOILER. Way to ruin the adventure without it.
Click to expand...

I think writers are tempted to put "this is how long travel takes" usually because of "Okay, I put ALL buffs in before we walk in" players That and to know travel time flavorwise