I've been on the fence abput putting this together for a while now & the fighter playtest announcement gave me a push to wrap things up. The 5e cleric entry is very heavily slanted to fit FR/Greyhawk with a significant amount of phb 56 & the class abilities itself reinforcing both the specific hands on meddling role of FR's gods as well as the relationship between clerics & gods... but that's not the case once you start crossing into other settings 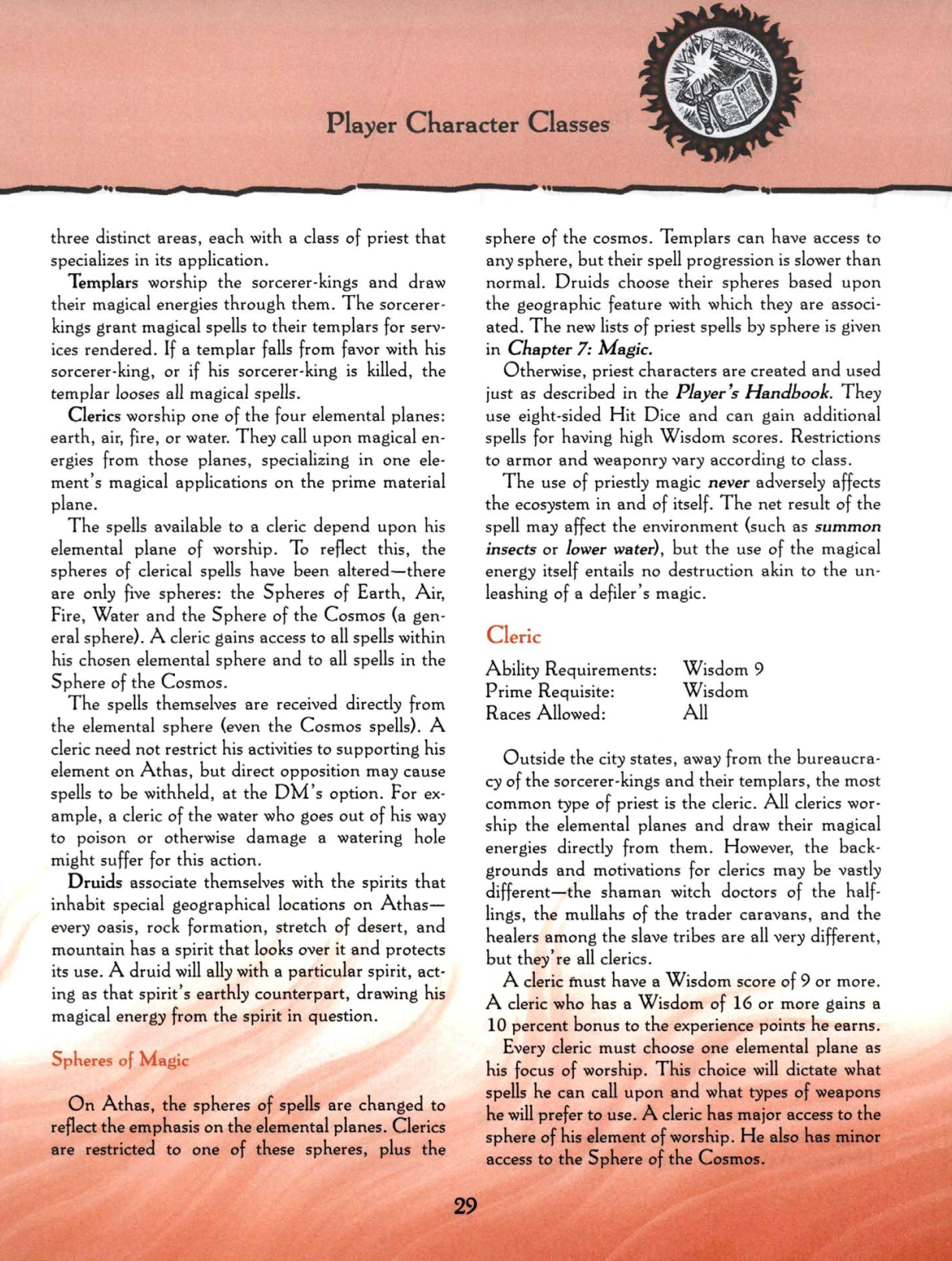 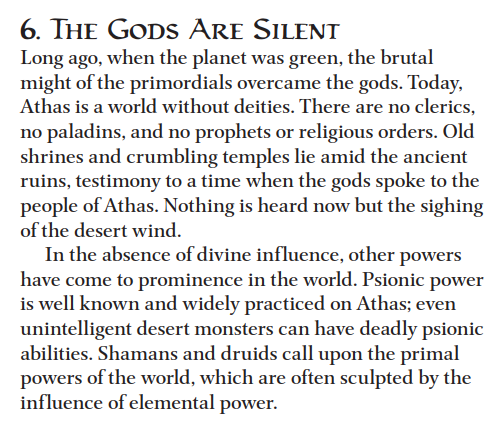 Not only are the gods not a factor in divine magic for Darksun, religion in general is not something that the people of athas are involved with because the Sorcerer Kings have taken that role in the world & use their armies to forcefully put an end to anyone foolish enough to subvert their authority. The rare clerics that do exist draw their power from the elemental chaos (one of DS's planes) either directly or as part of a bargain between a powerful elemental creature from the elemental chaos. 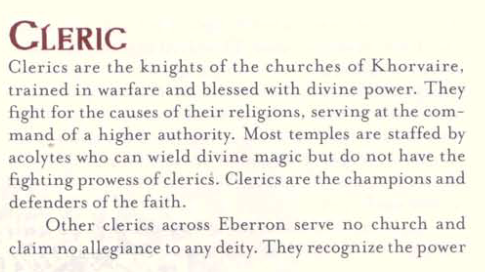 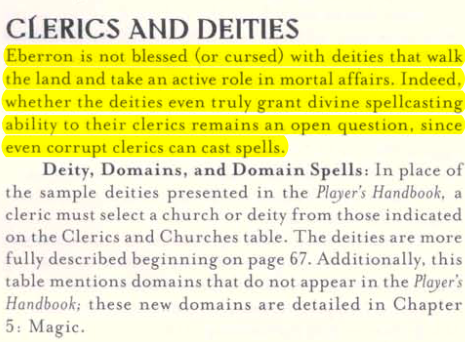 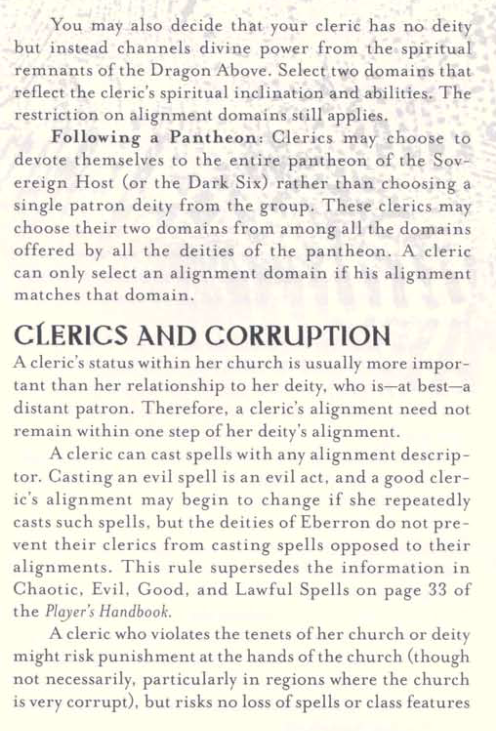 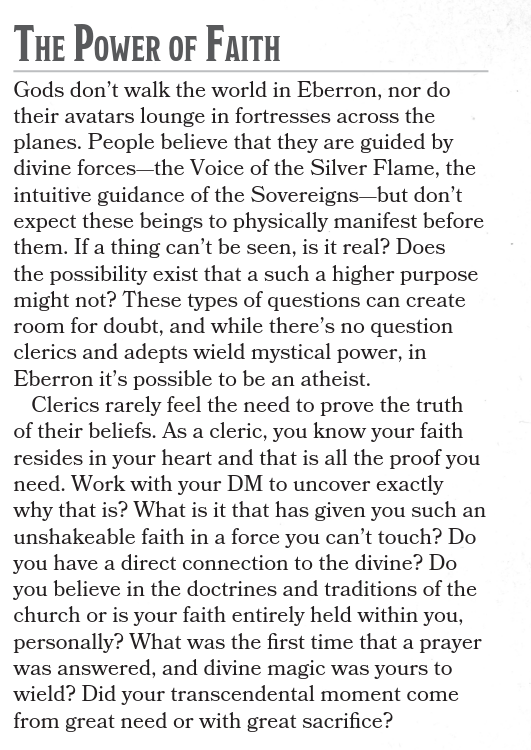 Much like Athas, Eberron does not have literal provable gods & even in the days of 3.5's absolute morality it allowed evil clerics to gain power from a good faith. More than one of the most heavily followed religions of eberron are in service to a concept or similar(Church of the Silver Flame, Blood of Vol, Path of Light, etc) without even having a god. This is possible because divine power comes from faith. 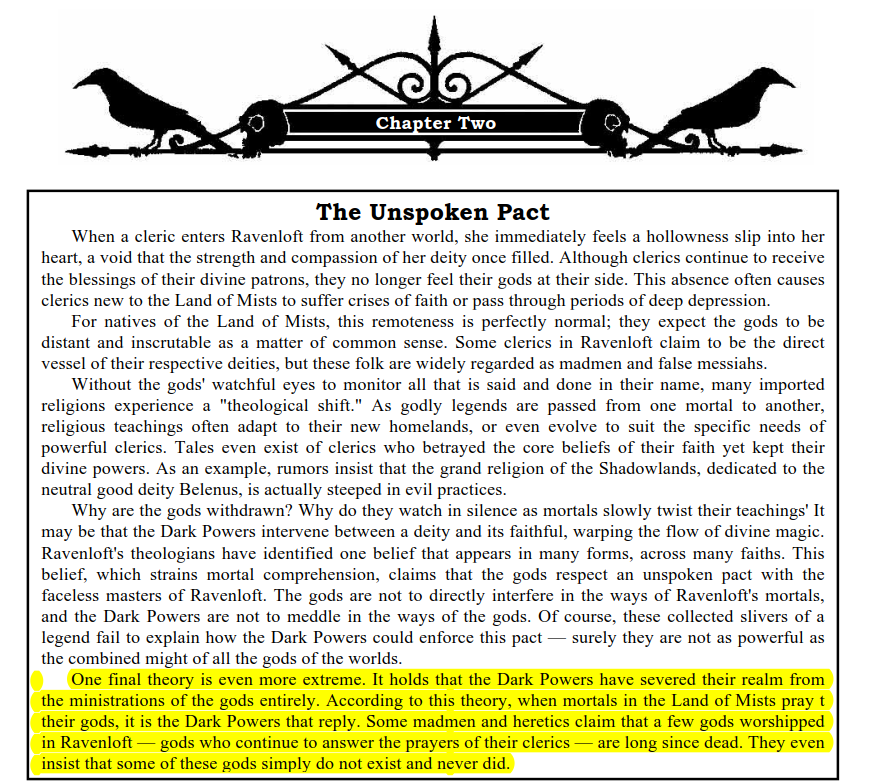 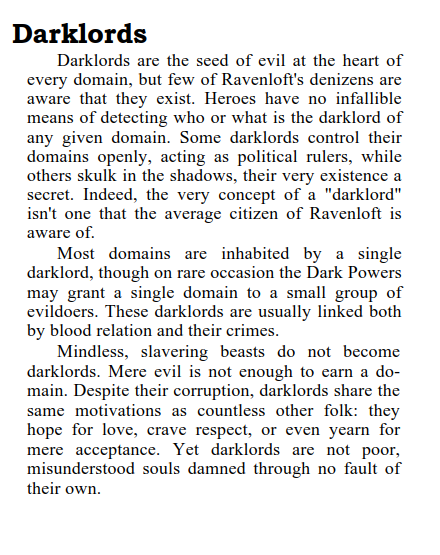 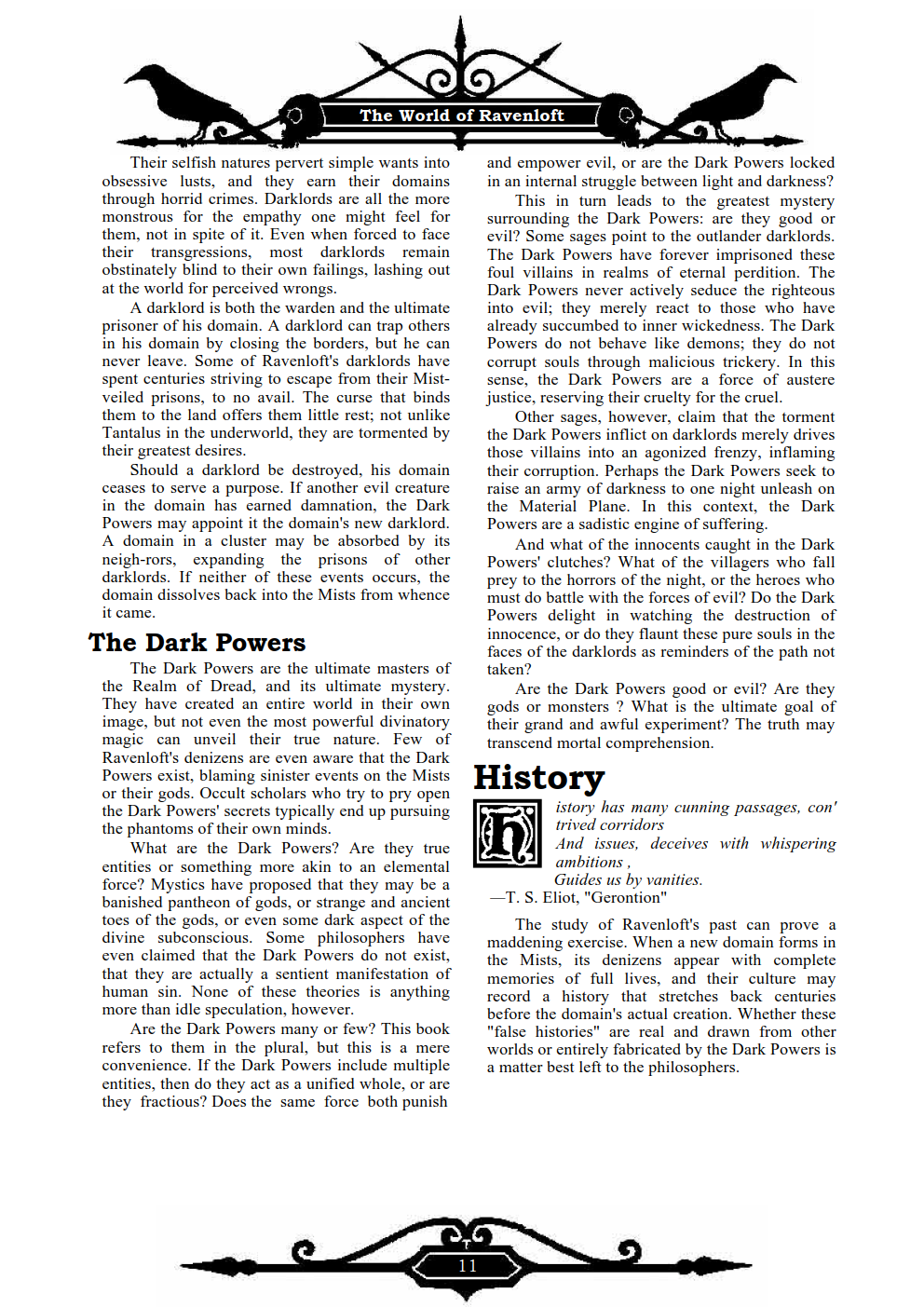 I don't include An excerpt from 5e CoS largely because it does not touch on it to any notable degree, does not mention any of the religions that actually exist in Ravenloft, and does not really even admit that barovia is only one part of the larger Ravenloft itself. Matters are not helped by the thick coat of FR norms applied to so much of CoS itself. Given the role of The Dark Powers in divine spellcasting It's important to recognize that Strahd is just one of the Dark Lords even more at the whims of The Dark Powers than player characters rather than The controlling power as 5e CoS makes him out to be.

In all of these settings faith can act as a cornerstone in divine magic, but the same is not true with the active hands on gods of FR. Faith justify the active gods granting a particularly devout individual the power to cast divine spells in FR & Greyhawk. Faith in a Sorcerer King or being from The Elemental Chaos can justify those individuals choosing to grant their divine casters power not granted to others. Faith can be shaken even to the point of triggering a crisis of faith in a setting like Ravenloft. Faith is explicitly spelled out as being critical in the casting of divine magic a setting like eberron where much like Darksun/Ravenloft the gods are distant or do not exist. The gods as defined by FR only sometimes play a factor in these settings & when they do that factor is often dead, missing, silent, absentee, or just blocked/cut off.

I would also prefer if A5E use Divine magic as fueled by faith, zeal and devotion rather than being gifted directly by a Power. I prefer to let the theme of ''given magic'' to the warlock.

This would allow people to play A5E in those god-less settings without the eternal debates about banning some classes because the gods cant interfere with the setting.

In Xanathars, 5e connects divine magic with a "cosmic force". This force can be anything from a philosophy (such as an ethical alignment) to the power of love, to the physical energy of light, or so on.

Rather than "faith in faith", I feel a cosmic force helps anchor the sense of the sacred with a verisimilitude that works better for gameplay.

Heh, it reminds me of the "higher power" of recovery groups, where the individual is free to define this power in any way that is personally meaningful and helpful.

The cosmic force works well for any kind of reallife religious traditions:

• animism where coexisting with natural features of a shared existence is a fundamental way of life
• sacred philosophies, such as Daoism (dao of yang and yin) and Buddhism (nirvana)
• monotheism where existence is love, or infinite energy, or so on
• even capitalism and communism are sometimes understood as sacred philosophies
• the mysterious and transcendent properties of being a conscious being (humanoid)

The force is ultimately understood to be how reality comes into existence, and ensures survival and wellbeing, or at least honesty.

A cosmic force is a good solution that invites the freedom of religion of each player, to choose whatever is meaningful, while still focusing on the gaming aspects such as vivid symbols, community values, personal ideals and flaws to roleplay.

The flavor I have in my setting is that any magic user is tapping into some power source. Sorcerers have power within. Warlocks make a pact with a specific entity (and often don't share the values of that entity). Druids draw from the environment. Wizards study rules and exploit them like hacking the code of a video game. And clerics only have power if there is an organized religion that has people regularly praying or making offerings, which generates a potential energy tied to a particular ideology. Bards are similar in that they tap into the collective investment people have with works of art and music.

So in my setting, if you discover a god of your own that doesn't have a church, you'd be really limited as a cleric, but you could certainly be a warlock.

I'm not sure, though, whether there really needs to be any sort of mechanical change to reflect this in Level Up. All I'd like to see for clerics is for people to get more domains, because the 3e/PF conceit of 'assembling' a cleric by picking two domains led to some fun flavor.

For Dark Sun, one of the easiest option is to make four elemental domains (possibly reskin Light into Fire, possibly not) and maybe use Tempest and Life as well. Clerical magic was a thing in DS, just very rare. The other easy option is to ban the Cleric class altogether, ban inappropriate Druid templates (like the Shepherd), and create a few more elemental Druid archetypes. Or you can go the old-fashioned route and say that Clerics get powers through faith and can get up to 2nd-level spells. However, since there aren't any gods there (at least none that I recall), there aren't going to be many Clerics of them. (You're going to have the same problem with a lot of Warlock pacts as well; IIRC, it was a demon/fey/GOO-lite setting.)

For Eberron and Ravenloft, well, there's some force that allows Clerics to use clerical magic. It might be that the gods are real in Eberron, or it might be that the energy of the three primordial dragons allows for it, even if they themselves don't act like "proper" gods. It's likely that the Dark Powers are merely pretending to be Ezra, Hala, the Lawgiver, the Morninglord, Yutaw (or whatever it's called), etc. Clearly the Dark Powers have godlike abilities, even if it is all twisted towards horror.

D&D 5E Faith and worship in my setting

D&D 5E Alternative uses of the Starter Set for 5e