When Kickstarter’s ZineQuest 2021 was rolling, Tony Vasinda shared my RPG zine on his show. I was elated and picked up a quote from him for my project. When he announced his new project, Down We Go, I was curious about it and the site he chose to crowdfund it on, GameFound. Tony was good enough to answer my questions about his old school rule lite RPG including who is working on it, how the system works, and why he’s using GameFound as opposed to Kickstarter. 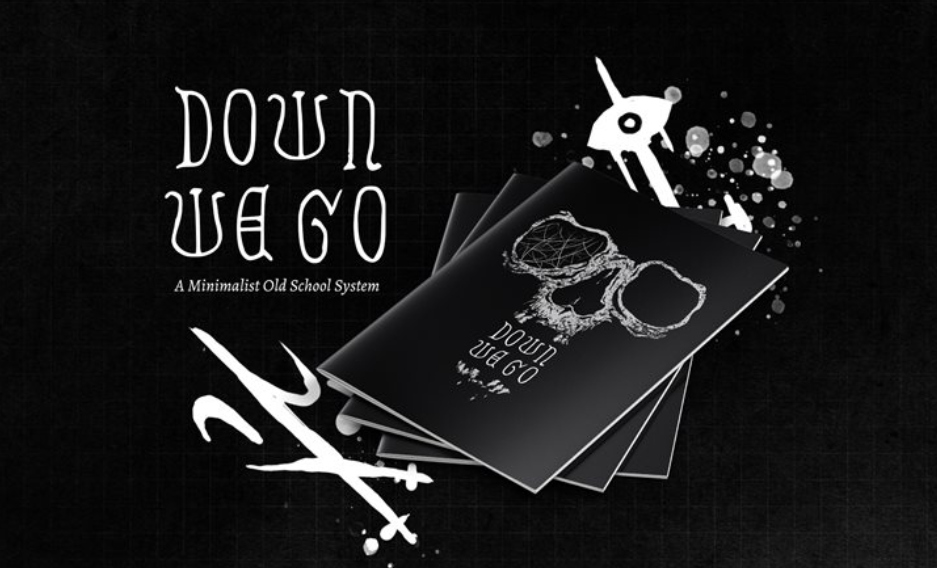 EGG EMBRY (EGG): Thanks for taking the time to talk with me. What is Down We Go?
TONY VASINDA (TONY): It’s a rules lite old school style RPG that takes just minutes to prep and start playing for both players and GMs. The core rules, which all fit on the character sheet, are by Swedish designer Markus Linderum, but we have a global team of designers who helped expand it.

EGG: What kind of adventures can gamers expect from Down We Go?
TONY: Down We Go focuses on “dungeon” delving. Players descend into tombs, climb ancient towers, old sepulchers, and sealed vaults, but Markus designed each dungeon to let you have a different experience every time you enter. It might be flooded one time but in flames the next. An alchemist might control it, or a mysterious watcher. Each dungeon has a set of modifying adjectives that shift the contents, and players answer rumors about what they have heard is down there using our Lore as Loot system.

EGG: What can you share about Infinopolis? Mechanically, how does it shift and change?
TONY: So the only thing you need to build a campaign besides dungeons is a City. I asked Markus to make a page or two of simple city procedures to create some basic economics and downtime activities. Markus came back with all of that, but the city, Infinopolis, is dark and each district of the city had an almost dungeon-like quality to it. You sketch out a quick map of the city by drawing 9 circles. 6 of these are your main districts and the other three are completely temporary. They pop up, move around, change what they are, where they are located and more. Each district has distinct functions, but even the 6 main districts change as the game progresses. Just like dungeons each district has an adjective list. So every time you go back to the Bazaar you roll a new adjective. Each district also has its own set of rumors and questions to ask the players, and these change every time you go back. To leave the city is to invite the city to change.

EGG: This is old school done lite. How does the system work?
TONY: Great question, the core rolling mechanic is D20+Role for checks and D6 for Luck. It’s all player based rolling once the game starts. Damage is flat so combat moves quickly. Abilities are limited by level, but they auto succeed. The most elegant part of the whole system really is the Role (R-O-L-E) system Markus designed. It fuses stats, class, and skill down into four Archetypes: Sneaky, Mystical, Holy, and Bloodthirsty. You can level each of these up individually and create a highly customized character. Each level you put in one also unlocks an ability you can pick from and use level times per day. The longest part of the character creation process is honestly writing out your starting inventory. Learning the game and making your character takes minutes. 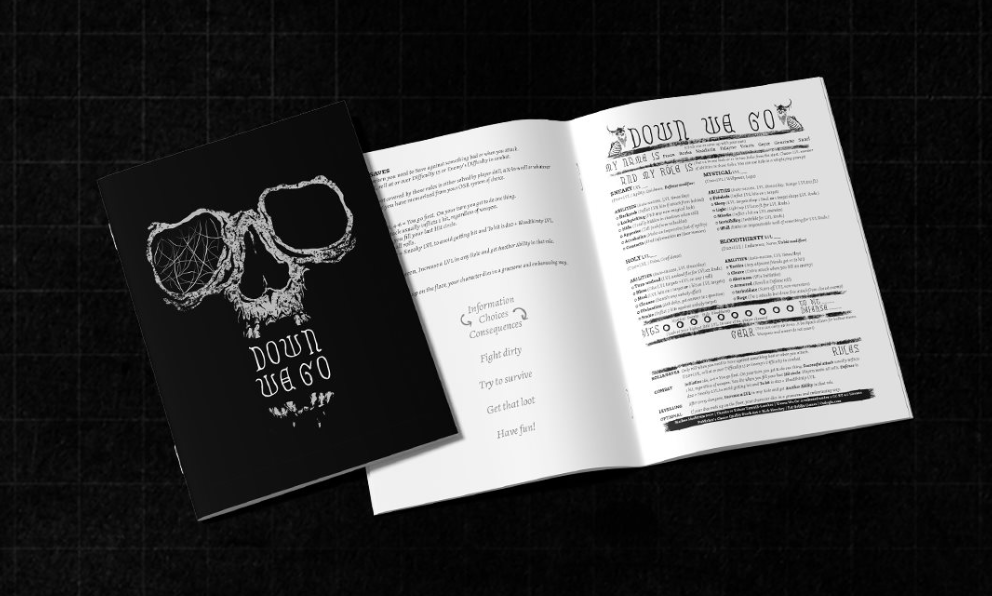 EGG: What inspired you to dive into a rules lite old school project like this?
TONY: I love the creativity of rules lite and minimalist games, and OSR games do an amazing job at this. I would say that there were three main factors.
EGG: You’ve talked about the creative team, let’s go into that: Who is on the team?
TONY: So many amazing people. At the core, Markus is lead designer, I am developing the game, and Simone Tammetta is lead artist. Also Johnny Isorena is our graphic design and layout lead and is a part of the Plus One Team. All contributors are listed on the page and we are still adding more as we unlock goals. It's a global team of over a dozen voices from Europe and the UK, US and Canada, the RPGSEA community of South East Asia, and the RPGLatAm community in Latin America. Basically we made a list of people we knew would add a unique and strong voice to the project and made invitations. Every single person said yes and we worked with them to find the best part of the project for them to work on based on their skills. The team is honestly the thing I am most proud of for this project.

EGG: This is not the first RPG crowdfunding on GameFound. Why choose GameFound over Kickstarter or GameOnTabletop?
TONY: I think there is a desperate need to diversify our crowdfunding options in the RPG community. I love what Kickstarter has done for the TTRPG industry. We are huge supporters of the platform, but there are real challenges with it and a consistent lack of responsiveness around some core issues. GameOnTabletop does amazing work in Europe. It does not have the US footprint and it’s not a system I have used before. In the end there are really three things that made me go Gamefound. 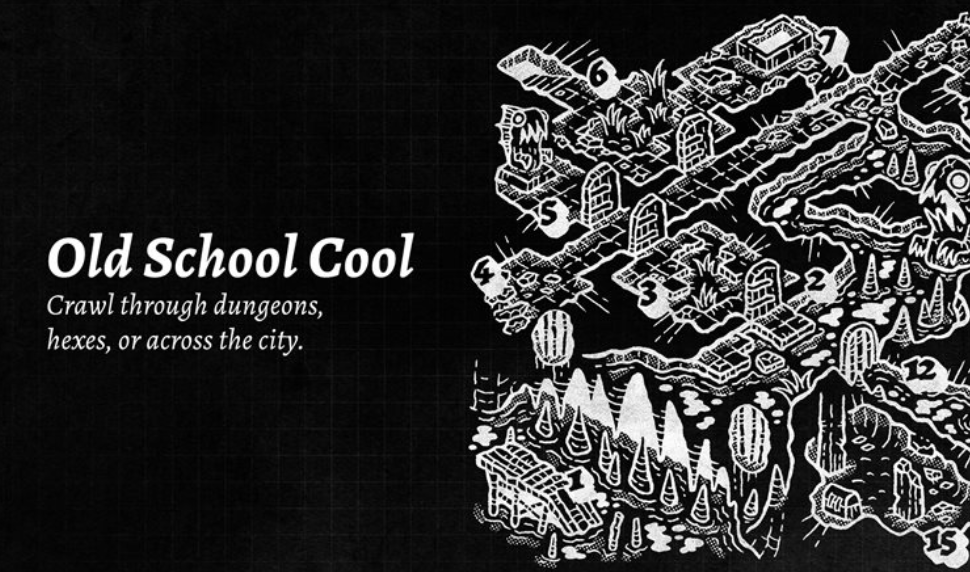 EGG: I spoke to Brian Colin about his RPG on GameFound, Vast Grimm. He had positive things to say about the tools in the platform. How has your experience been with the interface and tools there?
TONY: It’s in beta so there are a few items I would change, but very few. The preview options are far superior, the personal touch of the Gamefound team is amazing and the layout is superior. I’d love to see the analytics boosted slightly and a few items moved around, but it’s such a great system.

EGG: Beyond Down We Go, what else are you working on?
TONY: Repugnant that John de Campos and I funded last ZineQuest is finishing up! You can preorder that, and my game I, Toaster launched over on Exalted Funeral this summer, but right now I am working on two major projects. Through the Void is a scifi hack of Down We Go that I am writing to publish using the Down We Go third party license, and Flavor Force which is the working title of a Fantasy Dungeon Crawling Gourmet Kitchen game we will also be releasing next year. On top of all that we help cover other folks' games over on the Plus One Exp Youtube Channel.

EGG: Thanks for talking with me. Where can fans follow your work?
TONY: For Down We Go head over to Gamefound, but for all the rest check out our site or follow us on social media @plusoneexp.

Down We Go | Infinite Edition
Egg Embry participates in the OneBookShelf Affiliate Program and is an Amazon Associate. These programs provide advertising fees by linking to DriveThruRPG and Amazon.

Egg Embry is part of EN World's Columnist (ENWC) program as well as a columnist for Knights of the Dinner Table, d20 Radio, High Level Games, the Open Gaming Network, the Tessera Guild, and GAMA's magazine, Around the Table. His area of focus is tabletop RPG crowdfunding campaigns. In addition, he blogs about Ghostfire Gaming's Grim Hollow setting. His RPGs can be found through Egg Embry Publishing at DriveThruRPG (PDF) and Itch (PDF/Print).
If you enjoy the articles on EN World, please consider backing the EN World Patreon. Every dollar helps to make these articles possible.
B

I'd love to see a few examples of how this rpg differs from other OSR games? Highlights?