Dragon Publishing released The Dragon issue 40 in August 1980. It is 86 pages long and has a cover price of $3.00. In this issue, we have death rites, more Awful Green Things from Outer Space, and Dragon's first Runequest article! 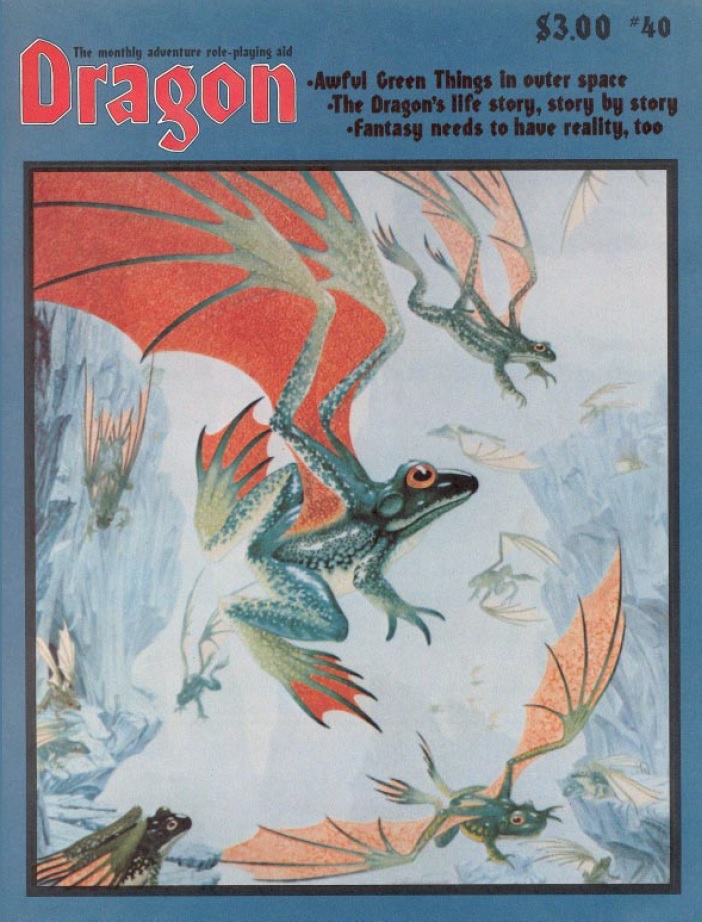 Editor Jake Jaquet reflects on Origins '80, attended by the entire editorial staff (Jake, Kim Mohan, and Bryce Knorr). He damns it with faint praise, calling it a "decent convention" that will likely be "forgotten tomorrow." Jaquet laments the small size of the convention space and suggests it is time for gaming conventions to move into professional convention facilities. He also ruefully congratulates The Journal of the Travellers Aid Society for taking out the "best magazine" award.

There are three special features this month. One of them is a comprehensive index of The Dragon and also The Strategic Review, the house organ that preceded The Dragon. The other two features are expansions to Tom Wham's perennially popular Awful Green Things from Outer Space boardgame. The Dragon published so many of these centerfold games that they eventually released a box set of them. In this instance, the games are complemented by an engaging interview with the designer.

There is a good selection of material in the regular columns. Bryan Breecher gives us two Squad Leader scenarios covering the battle for Warsaw. "Bazaar of the Bizarre" includes some strange magic items, such as the Crossbow of Multiplication and Nidus' Wand of Endless Repetition. In "The Electric Eye," Mark Herro teaches us how to program in the BASIC computer language, with the ultimate goal of using computers to automate some of the housekeeping associated with RPGs.

"Dragon's Bestiary" includes four creatures by various authors, including Ed Greenwood and EN World's own Lewis Pulsipher. Said monsters are the Fire-eye Lizard, the Flitte, the Wingless Wonder, and the Huntsmen. My favorite was the Huntsmen, magical constructs that hunt in groups, with the other members growing stronger each time one of them dies.

"The Dragon's Augury" reviews four products. Annihilator by Metagaming is a science fiction microgame that suffers from a "poorly developed" rationale and mechanics. High Guard by GDW expands the starship construction rules for Traveller and "works well." Swordquest by Task Force Games is a fantasy wargame "drawn heavily from Tolkien" that "seems to trade off personalization" in the name of game balance, leading to a slightly bland experience. The Drawing of the Dark by Tim Powers, a historical fantasy novel, is "by no means a great book, but it is a good one."

There is a typically eclectic mix of other features. "The Dueling Room" by Jeff Swycaffer describes a magically morphing arena for player vs. player D&D combat. There are some neat ideas here, but the utility of such a facility is pretty limited. Swycaffer later wrote a series of science fiction novels that were popular in some corners of the RPG community.

"Believe it or not, Fantasy has reality" is a lengthy and unusual article by Douglas Bachmann. It starts out arguing that the world of Faerie is an objective reality but is really about some new D&D mechanics to implement the "quest pattern" described by Joseph Campbell in The Hero with a Thousand Faces. I'm not quite sure what to make of it as an integrated whole, though I can see how various parts (such as Legends and Dooms) could be adapted to play. Bachmann seems to have disappeared off the RPG scene soon after this effort.

"Funerals and other deathly ideas" by George Laking is a delightful article that looks at how you can apply some historical death practices to your D&D game. One intriguing idea was of a weregild. This is a sum that the party pays to the deceased character's family to compensate them for their loss. I relish little articles like this that bring a fun new angle to a small part of the game. Laking had contributed several articles to The Dragon by this time, including the superb Anti-Paladin.

"Don't drink this cocktail" gives detailed rules for creating Molotov cocktails in D&D. The author, Robert Plamondon, later wrote Through Dungeons Deep: A Fantasy Gamers' Handbook, which is still available on Amazon and is well-regarded.

"The fatal flaws of Crane" by Mark Cummings is an extensive critique of Tribes of Crane, one of the first commercial play-by-mail games. "Giving the undead an even break" by Steve Melancon is an overly-earnest attempt to rebalance the cleric turning tables. "From Spy World to Sprechenhaltestelle" is another article about the creation of Top Secret. This time, Merle Rasmussen describes the game's early playtests and what they learned from each one. Fascinating content, especially for game designers.

"The Other Were? Right here!" by Roger E. Moore proposes several new lycanthropes, including the werelion, the wereram, and the weresloth! It's fun, short, and well written. Moore was a military psychologist on deployment to West Germany, and this was one of his first contributions to The Dragon. He joined TSR in 1983, was the inaugural editor of Dungeon Magazine, and later on the long-running editor-in-chief of Dragon Magazine. Moore's name appears on numerous D&D products in the 90s, and he finally left Wizards of the Coast in 2000. An illustrious game career, and I'm curious about how he has spent the last 20 years.

Finally, we have "Artifacts of Dragon Pass" by Jon Mattson. A few issues back, Jake Jaquet declared that The Dragon had never had a Runequest article submitted. Mattson took up the challenge and here presents us with six new magical artifacts for the game. I can't talk to the items' mechanics, but they are imaginative and seem integrated into Runequest lore. Mattson was a bit of an all-rounder, contributing articles to various magazines for various gaming systems. He eventually wrote a substantial supplement for the Champions game called Champions of the North before sliding out of the RPG industry.

And that's a wrap. It was not as good as some recent issues, but Laking's article on death rites was excellent, and I also enjoyed reading some early Roger E. Moore. Next month we have The Halls of Beoll-Dur, new rules for Melee, and a real-life cleric looks at D&D!
Last edited by a moderator: Apr 5, 2021
Click to expand...

Thanks for stopping by and sharing with us!

Who wouldn't want to hop in a Grumjig to chase Boodlettah before she can escape? The art for the game was also delightful.

Hey, if Trampier was on the verge of coming back to the hobby when he died, anything can happen...


JonM said:
Although I still have some old Dragon-related correspondence, conducted with Roger, I never really knew him that well, since he was becoming more a fixture at TSR at around the same time that I was starting to write more for other magazines/companies. I do know that Hasbro let him go around.... end of 2000, I think? But, then, they were letting a lot of people go, around that time, and others were leaving, of their own accord, so that doesn't really mean much. I had no contact for with him, after that (or with WotC, either, for that matter), and he really seemed to have dropped off the map, RPG-wise. I wouldn't want to speculate or gossip, beyond that, but I do agree that his departure was a loss to the community. Hopefully, one day, he'll reappear.
Click to expand...

Ralif Redhammer said:
Hey, if Trampier was on the verge of coming back to the hobby when he died, anything can happen...
Click to expand...

Dioltach said:
The Huntsmen are presumably taken from The Chronicles of Prydain, by Lloyd Alexander. The Huntsmen of Annuvin appear from the second book onwards. I used my own version of them in one of my first 3E games: seven level 1 rangers became six level 2 rangers became five level 3 rangers and so on ... The PCs ran away when there were only four of the Huntsmen left. I was thinking about using them again only recently.
Click to expand...

They are definitely inspired by the Prydain Huntsmen, right down to being created in a cauldron. Although I can't remember if only the deathless Cauldron-born were created that way in the books. I remember always trying to make some version of them in every D&D game I played because they were so cool a concept.

JonM said:
Jon Mattson here. Thanks for the kind words! I'm continually amazed and flattered that anyone is still interested in the stuff we did, way back when. That was, quite literally, a lifetime ago.
Click to expand...

It's a real pleasure to hear from you, Jon! I'm pleased to hear you are still gaming and still creating. So often when I review old Dragon magazine articles I think, "Where are they now?"

One of my earlier acquisitions. Good times.

JonM said:
That's cool! Now, someone just has to pick up Snit's Revenge and Mertwig's Maze. I have all three of these, in original form, but they are in... shall we say... less than mint condition...
Click to expand...

Well, that seems fair... I'm not in mint condition anymore either And yeah mine saw more use than the magazine they came in. Although the thing I remember most for this issue was the index. That's bagged with my old magazines.

Tom Wham is definitely a character, remember meeting him at Gen Con at Parkside...

I actually taught some of my elementary school students that game recently.

I still have my dragon magazine collection going back to the early 20s. I wonder if it's worth anything. It's taking quite a lot of space.

Any word about wererams and other werebeasts?

@JonM , was reading through Barrows & Beasts, and I really like it. Fun & Simple.

Uta-napishti said:
@JonM , was reading through Barrows & Beasts, and I really like it. Fun & Simple.
Click to expand...

Whizbang Dustyboots said:
On the issue itself: Great cover, and I wish more of these smaller fantasy animals were part of the game. The ripped-from-the-Hobbit black squirrels in Monster Manual 2 are always a favorite of mine for that reason -- they make the world more fantastical without necessarily upsetting the fantasy "realism" too much.

"Drawing of the Dark" is definitely one of Powers' earlier, lesser works, but I think it's much better than the reviewer did. It's a fantasy story that takes place in an under-utilized period of European history and the "dark" it revolves around is beer. Oh, and in addition to the Austrian-Hungarian setting, it also includes the return of King Arthur. More folks should check it out.

And is Awful Green Things from Outer Space in print today? If not, it really ought to be, rights allowing.

I agree with you about "The Drawing of the Dark", I've still got it sitting on my bookshelves - a lesser effort, perhaps, but one that was showing the subtle touch Powers has for creating a real sense of "place" in his stories. A 16th century, central European riff on the Arthurian mythos with magic beer? Much, MUCH better than a lot of fantasy going around today, and deserving of a better final review than simply "good".

Powers can have his misfires -- the last part of his Earthquake Trilogy was rough to get through -- but Drawing of the Dark is by no means one of them.