Dragon Publishing released The Dragon issue 42 in October 1980. It is 80 pages long and has a cover price of $3.00. In this issue, we have demonic patrons, monster tactics, and a massive haunted house adventure! 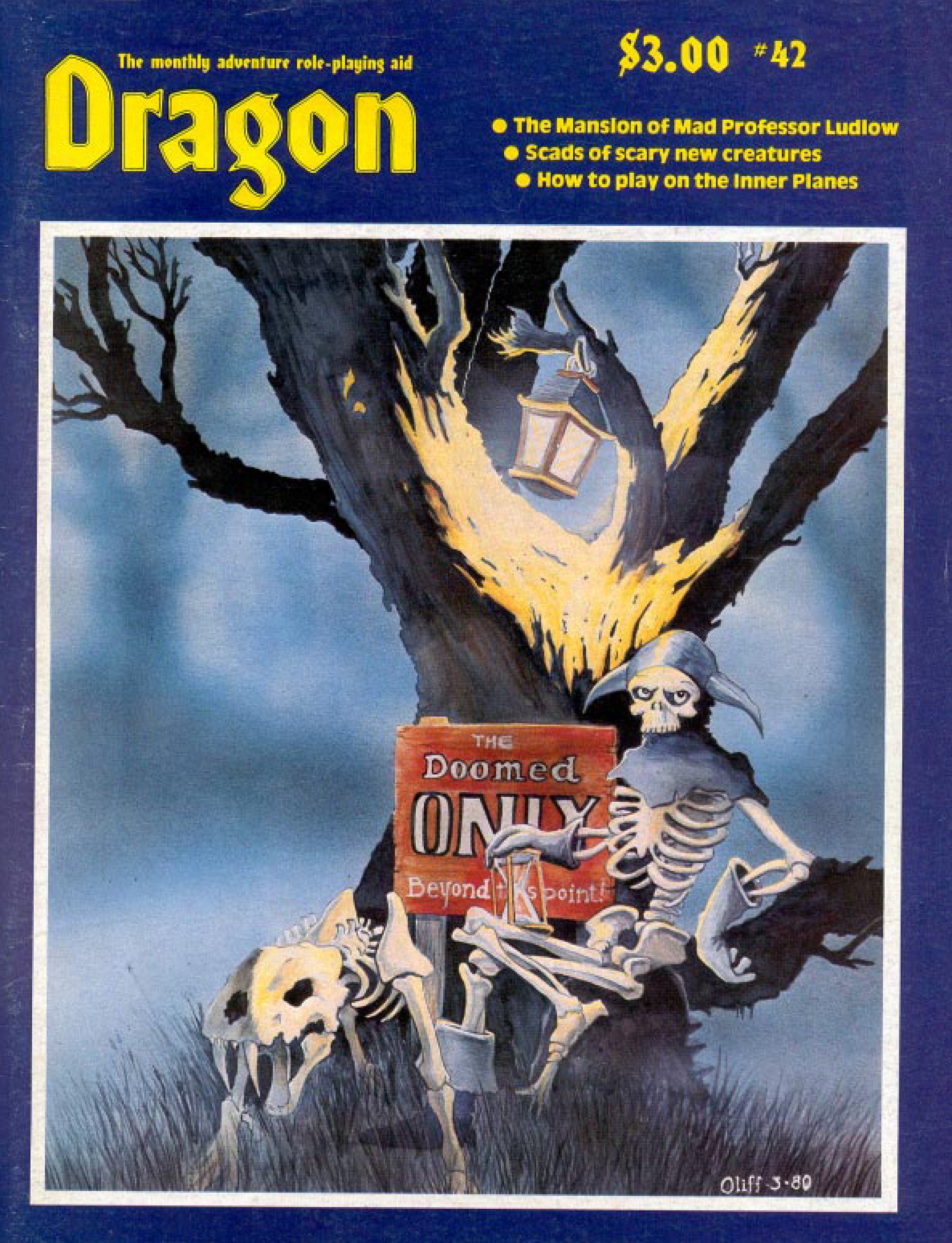 Editor Jake Jaquet reviews the just-completed GenCon XIII. Perhaps unsurprisingly, the review is somewhat more generous than the one he gave Origins '80, just two issues ago. Jaquet describes the convention as "successful" and states he has heard no criticisms about the tournament organization or convention security, which have been a source of complaints in the past. There were many good comments about registration. The venue, the University of Wisconsin at Parkside, "has one of the best setups for conventions" he has seen.

The issue is Halloween-focused, and this month's special feature is "The Mansion of Mad Professor Ludlow," a spooky D&D adventure by Jim Ward. Intriguingly, the scenario is set in the modern world and does not use regular D&D characters. Instead, the characters are campers with 50 hit points, AC 10, and hitting as a first-level fighter. Equipment includes things such as a compass, jack knife, flashlight, etc.

The characters are hiking at night when they come across the titular mansion, which is three-stories tall and has nearly 100 rooms. While there are several challenging fights on offer, the focus is on exploration, puzzle-solving, and gathering loot. It's great to see TSR trying something fresh, and it's fascinating to realize this scenario was released several months before the Call of Cthulhu RPG.

There are several other features following the horror theme. "Demons, Devils and Spirits" by Tom Moldvay presents statistics for several new monsters: the saraph, apolloyon, asperim, and hacamuli. "The Possessors" by Arn Ashleigh Parker defines a new class of fiend, one whose main attack is demonic possession. Parker was just 19-years-old and later published several other articles in The Dragon, some well-regarded. "Patron Demons" by Lewis Pulsipher anticipates the official warlock class by several years, and his article might be the first time this concept was treated in D&D. "The Restless Dead" by George Laking describes "restless spirits," which are player characters that return from the dead to settle some grievance with the rest of the party.

On to the regular articles. "Sage Advice" is back after a few issues’ absence. Sadly, it is without Jean Wells, who was probably working on Palace of the Silver Princess, the controversial adventure that ended her game-design career. Jim Ward and Will Niebling supply this month's answers, but their responses lack Jean's warmth and wit.

In "Leomund's Tiny Hut," Len Lakofka gives a typically detailed description of the inner planes, including the ethereal plane, the positive and negative energy planes, and the elemental planes. It is a thorough treatment, with numerous encounter and effect tables. Truthfully, I would have preferred less math and more time spent capturing each plane's vibe.

Tom Moldvay presents "Giants in the Earth," a regular series intended to give players the chance to meet the heroes from their favorite fantasy books. This month we have stats for Poul Anderson's Tauno Kraken's-Bane, Robert Adams' Sir Geros Lahvohettos, Gordon R. Dickson's James Eckert, and two heroes from medieval literature, Orvar-Odd and Heidrek.

Glenn Rahman dips into the seemingly inexhaustible well of Minarian lore to give us the History of Pon. In "Simulation Corner," John Prados reflects on the state of the art in wargaming by comparing the new version of SPI's Kursk with the old. In "The Electric Eye," Mark Herro effusively praises Scott Adam's series of text adventure games.

"Dragon's Bestiary" describes four new monsters: the monkey-like quatsch, the mechanical necroton, the well spirit, and the sandbat. The most competently designed is the sandbat, a flying stingray-like creature from the desert. However, none of them were ever reprinted by TSR.

"The Dragon's Augury" reviews four games. John Carter, Warlord of Mars by SPI is "an interesting game, and remarkably true to its sources," while Swashbuckler by Yaqinto Games is "just plain pleasant fun." Time Tripper by SPI is "varied enough so that it never gets boring," and Starmaster by Schubel & Son is "detailed, entertaining" and promises "hours of fun."

Gary Gygax is back after a five-month absence with a new "From the Sorcerer's Scroll." His topic this month is "making monsters meaningful," by which he means making them challenging. His suggestions are straightforward: use tactics, use the terrain, and create monstrous combinations. The advice is helpful and amusingly written. There is no denying that a Gygax article always lifts the whole magazine. As a postscript, he includes two new spells that he left out of the Player's Handbook due to space considerations: crystalbrittle and energy drain.

Overall, it is a strong issue with the articles by Pulsipher, Ward, and Gygax being the standouts. Next month, we have a Traveller adventure, a dungeon master rating form, and an all-new witch class!

That's great news - I look forward to seeing it!