Dragon Publishing released Dragon issue 49 in May 1981. It is 96 pages long and has a cover price of $3.00. In this issue, we have guidelines for wishes, the samurai class, and a new editor! 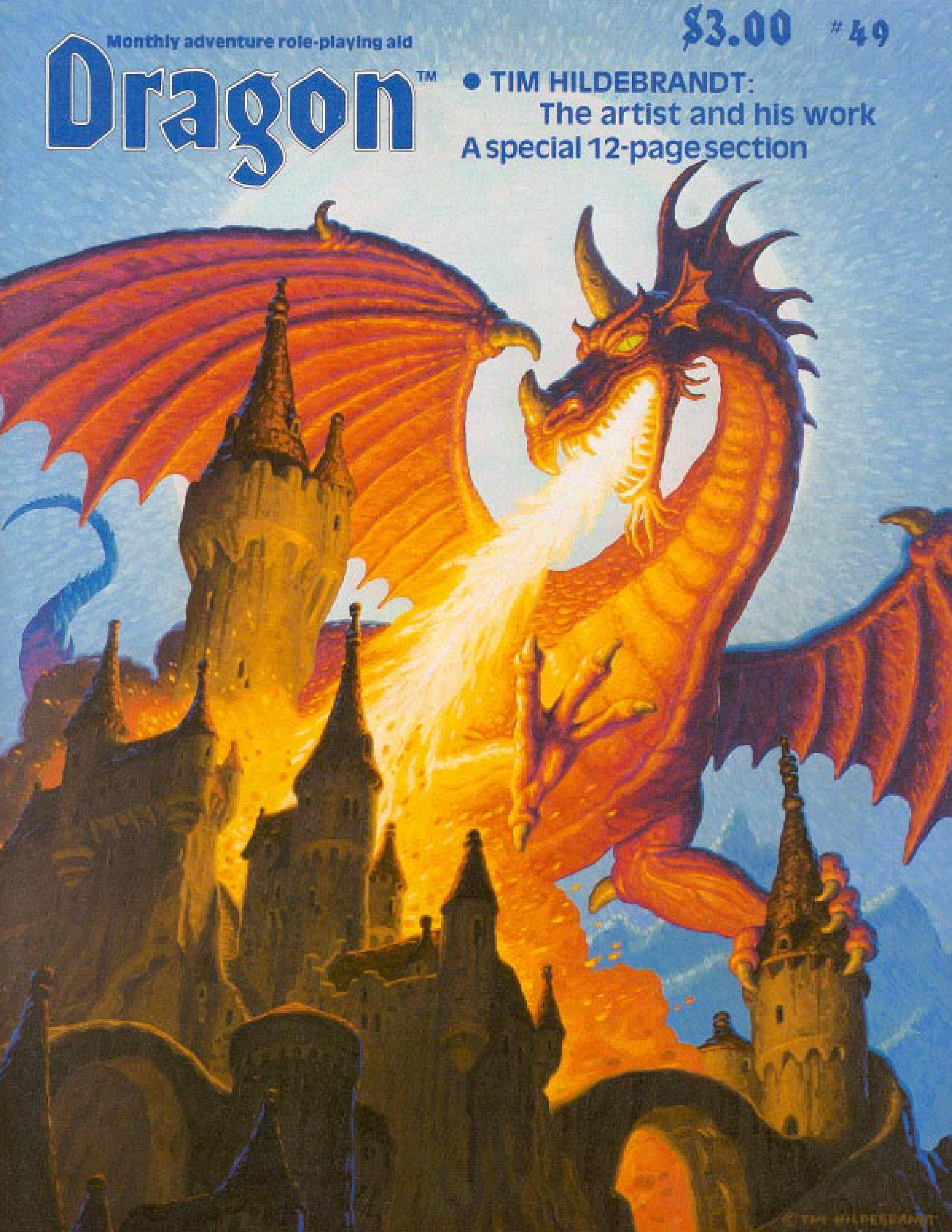 Jake Jacquet notes that he is now the Publisher of the magazine and that they have promoted Kim Mohan to Editor-in-Chief. "Publisher" is the title that TSR gave to the person in charge of the entire Dragon Publishing division, whereas the "Editor-in-Chief" actually ran Dragon magazine. Jake would still write the occasional editorial, but it was essentially Kim's magazine now and would remain so for the next five years.

This month's special attraction is a 12-page feature on the life and art of Tim Hildebrandt. He was a big deal in Fantasy fandom at the time due to his work (alongside brother Greg) on the Tolkien calendars in the late 70s. Bryce Knorr's interview is rather gushing but is interspersed with some of Hildebrandt's better pieces. Hildebrandt also gives something of a blow-by-blow account of how he paints, which this novice found informative.

This issue also includes a prominent feature on tournaments and conventions, with the most substantial part being a discussion about how to judge AD&D contests. The magazine offers several perspectives. This question came up repeatedly in the pages of Dragon, which reflects how important the competitive angle in RPGs was at the time.

In his only RPG credit, Anthony Salva presents a Samurai NPC class for D&D. This is the second time Dragon has published the Samurai, with a different implementation proposed way back in issue #3. There is the usual disclaimer attached to these "NPC" classes:

"In accordance with this magazine's policy, the Samurai is presented as a non-player character — a personality which the DM may use to provide players with variety and new challenges, but not one which the players themselves should be able to assume as a player character."
Click to expand...


It's somewhat naive how they insisted on this point, even while telling you how many experience points are required to attain each level! The actual class is a little too similar to the Monk for my liking but has some fun color.

"Getting a world into shape" by Karl Horak proposes creating D&D worlds using polyhedral shapes rather than the usual flat or spherical shapes. It's a cute idea, and he presents a detailed discussion around how you would navigate such worlds, but it doesn't seem to add a lot to the play experience. This article was the last of Horak's three contributions to Dragon.

In "Historical names make for better games," G. Arthur Rahman presents a selection of historical names for your gaming use, drawn from such people groups as the Lombards, the Kievans, and the Merovingians. I thought these were terrific, and I've saved them for my use.

"Monster Mixing" by regular contributor, Jon Mattson, takes several D&D critters and converts them to the Chivalry & Sorcery RPG. The article includes classic monsters such as the displacer beast, the shambling mound, and the gelatinous cube.

"Best wishes" by Gary Snyder lists out ten principles for adjudicating wishes. Some may feel he nerfs wishes a bit too much, but the principles are generally well-thought-out and helpful, and earned this article a place in The Best of Dragon Volume 5. It's a shame Snyder never contributed anything else to the field of roleplaying games. Nicely complementing this article is a piece of fiction by Roger E. Moore called "Wishing Makes It So," in which a group of D&D gamers find a real-life ring of wishes. It's an excellent premise though the execution is a little plodding.

Let's have a look at the regular columns. In "The Rasmussen Files," Merle Rasmussen describes several pieces of specialized ammunition for Top Secret. Meanwhile, in "Giants in the Earth," Roger E. Moore provides us with statistics for three characters from recent fantasy literature: Holger Carlsen and Hugi from "Three Hearts and Three Lions," and Ellide from "Women of the White Waste."

The "Dragon's Bestiary" has a single new monster this month, the lynx-like Nogra by Loren Kruse. In "Leomund's Tiny Hut," Len Lakofka presents us with yet another Alchemist NPC class. Dragon has published three or four alchemists by this point! And John Prados discusses the pros and cons of freelance game design in "Simulation Corner."

Bryan Beecher has another "Squad Leader Scenario," this time dealing with the fall of Budapest. Glenn Rahman tells us about the Eaters of Wisdom and the Invisible School of Thaumaturgy in "Minarian Legends." I'm growing more impressed with the creative depth of this world with every issue. "The Electric Eye" by Mark Herro shares a BASIC listing for a campaign timekeeping program. And in "Up on a Soapbox," Ed Greenwood makes a case for not explaining the game's rules to players.

"Dragon's Augury" presents four game reviews. The Hammer of Thor by Gameshop is "more interesting to read than to play." Assault on Leningrad by Simulations Games features "high-quality production and is very playable." World Campaigns, a play-by-mail game, gives you a "good deal of material and entertainment" for your money. Finally, Wohrom, an Italian game translated by International Team Games, is "beautiful" but not "worth the fifty dollars we must pay in the U.S.A."

And that's it for another month! My favorite articles were "Best wishes" and "Historical names make for better games." Next issue, we have a special feature on dragons, the International Dungeon Design Contest winner, and a giant vampire frog!
Click to expand...

M.T. Black is a freelance game designer. Go to his website for a free, five-star adventure!
V

R_Chance said:
Those level limits were what made "human" a viable choice. Given all the perks of being demi-human (infravision, multi-classing, bonus to Thieves skills. various checks for secret doors etc.) there had to be a big downside. And those level limits rose from edition to edition, from Original, to 1E, to 2E., until they weren't so... limiting. I don.t think any of us made it much beyond about 12th level after years of playing. And for Demi-humans Thief was unlimited...
Click to expand...


I've played in several AD&D games were pure elf, dwarf and halfling parties. We kept joking about how helpless humans were because our GMs ran the TSR stuff and the party is always finding a human village in distress. ('Sorta surprised someone didn't run a politics game of "These humans are too reckless, what do we do with them?")

Hindsight being 20/20, it seems that the human default story was "we're adaptable," the AD&D rules implied their strength was being super focused. I always wanted to flip the script and let humans multiclass to reflect their adaptability. Thus longer lived races would get only one class and show what a century of dedication and practice could do. Of course if I had such hindsight, I would have kept my old B/X stuff and hacked it like crazy.

There's this wonderful anecdote about when a bunch of the TSR artists met the Hildebrandts, recounted in the Eye of the Beholder documentary. They ask the Hildebrandts to critique their work, and at first they demurred. Eventually, after being pestered, the one Hildebrandt told them to look at Elmore's "Palin's Test." He said something like "there's one thing you'll not be able to unsee if I point it out to you. Tell me, is the only light source the torch?" Elmore replied "yes," starting to feel some trepidation. "If the only light source is the torch, how can Palin's robes be white?" 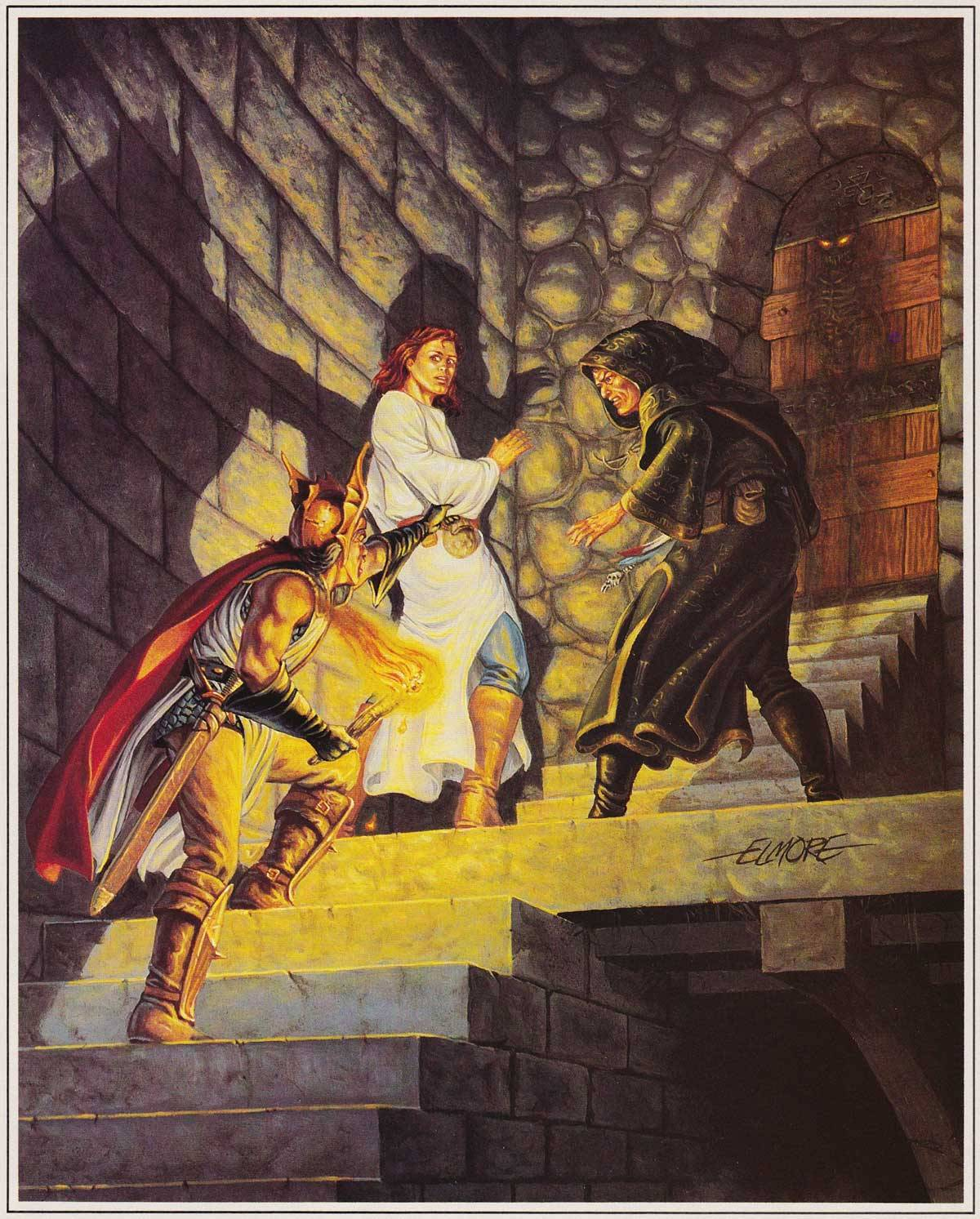 By comparison, here is the Hildebrandt Brothers' own Saruman: 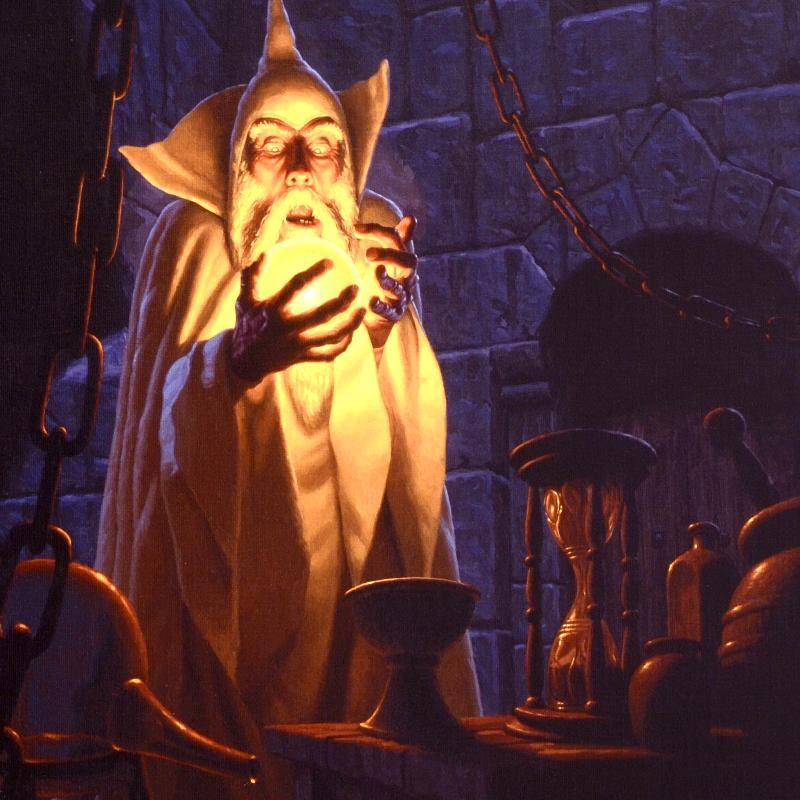 CharlesWallace said:
I used to own this set of hildebrandt trading cards back in the day: The Brothers Hildebrandt Collector Cards, cards #1-15 (1994)

I also had a bunch of frazetta cards too. And though I loved frazetta more, you’re absolutely right- the Hildebrandt art was just incredible when it came to lighting. Really cool stuff- I’d long since forgotten about those cards!
Click to expand...


Same. I omitted things like the weapons vs. armor table that were easily ignored and burdensome, but going so far as to strip out level limits would've been too much messing around with the mechanics for me at the time.


Casimir Liber said:
I think the level limits were the thing I hated most about AD&D 1e. But at age12 I was a bit scared to tamper with the rules....
Click to expand...

Ralif Redhammer said:
There's this wonderful anecdote about when a bunch of the TSR artists met the Hildebrandts, recounted in the Eye of the Beholder documentary. They ask the Hildebrandts to critique their work, and at first they demurred. Eventually, after being pestered, the one Hildebrandt told them to look at Elmore's "Palin's Test." He said something like "there's one thing you'll not be able to unsee if I point it out to you. Tell me, is the only light source the torch?" Elmore replied "yes," starting to feel some trepidation. "If the only light source is the torch, how can Palin's robes be white?"
Click to expand...


What a great story- thank you for sharing that! I think I watched that documentary, but I don’t remember that part. Clearly need to watch it again!

It's a great documentary - I can't wait to see what the MtG doc they're working on. And the story comes across better when told with Larry Elmore's self-effacing southern twang.


CharlesWallace said:
What a great story- thank you for sharing that! I think I watched that documentary, but I don’t remember that part. Clearly need to watch it again!