Dragon Publishing released Dragon issue 54 in October 1981. It is 84 pages long and has a cover price of $3.00. In this issue, we have a solo D&D adventure, rewarding ruins, and the Jabberwock! 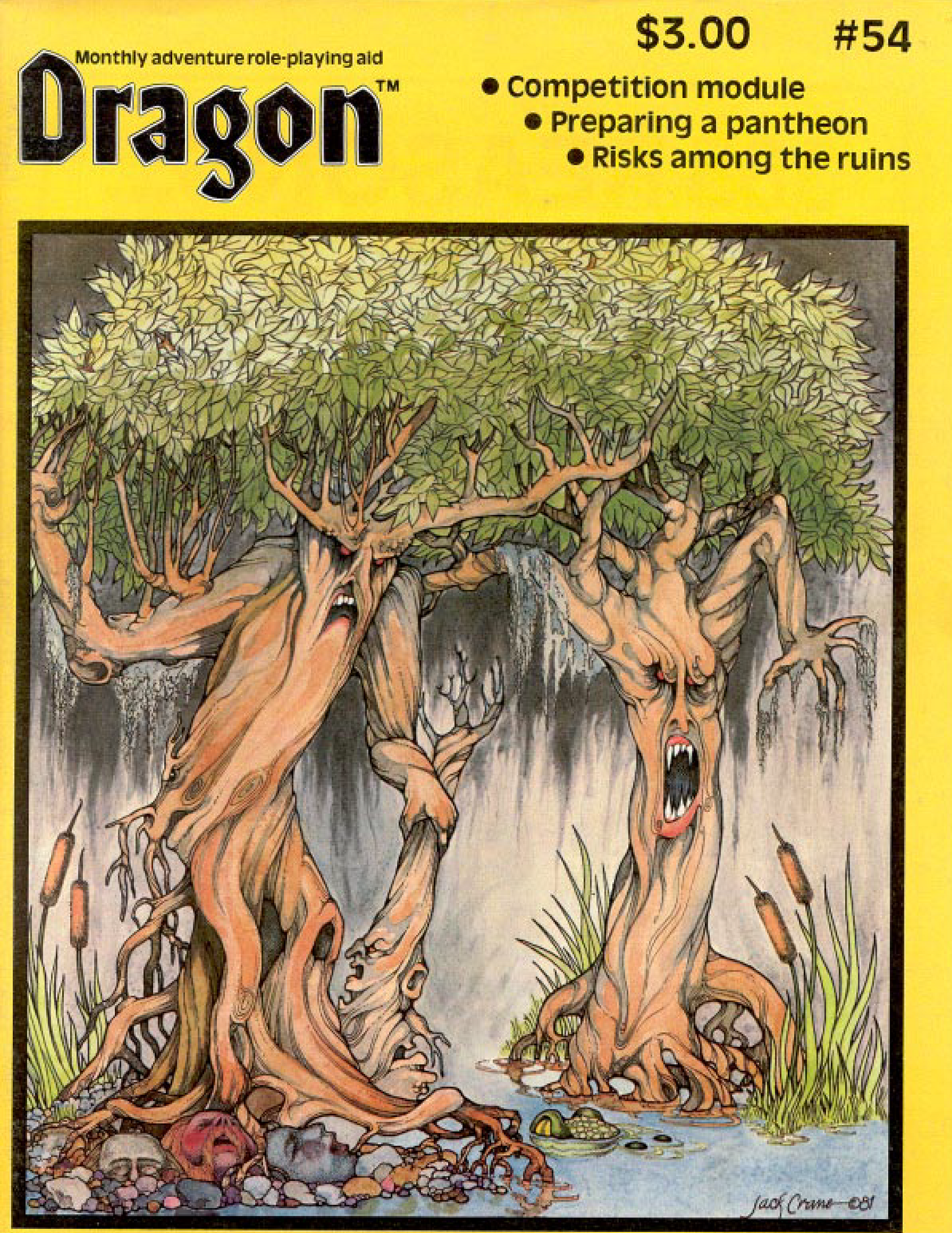 This month's special feature is "Cavern Quest," a solo D&D adventure with a twist. Each encounter tests your knowledge of the rules by giving you several options to choose from and scoring your selection. For example, the first room contains a black pudding. Lighting your torch helps you get through with a minimum of harm while drawing your sword leaves you exposed. Written by Bill Fawcett of Mayfair Games, it's a clever idea that must have strongly appealed to a specific market segment.

We have a tidy collection of other features. "Down-to-earth Divinity" by Ed Greenwood explains his pantheon design theory and presents a long list of Forgotten Realms deities. This must be the first time these gods were in print, and it is roughly six years before the first FR boxed set was published.

Next, Arn Ashleigh Parker brings us "Ruins: Rotted & Risky but Rewarding," discussing the many opportunities that ruined cities offer for play. The article features several random tables as well as suggested lore. It was later reprinted in Best of Dragon, and Arn contributed a small number of other pieces to the magazine.

In "These are the breaks," John R. Shaw presents a system for damage caused to your weapons. It was popular back in the day and even made Best of Dragon, but it seems overly complex to me for what it is offering.

"Beware the Jabberwock" by Mark Nuiver brings us statistics for the famous creature from "Alice in Wonderland." It's a fearsome predator, and it's fun to compare these stats with those presented in "The Wild Beyond the Witchlight."

In "Thieves Guild: Design Notes," Richard Meyer and Kerry Lloyd of Gamelords describe how the Thieves Guild RPG evolved from their D&D campaign and explain some of their design philosophies. There is a review of their product line later in this issue.

Frequent contributor Glenn Rahman brings us "Cash & carry for cowboys," an extended equipment list for the Boot Hill game. It is comprehensive and well-thought-out.

Finally, "Abomination" by D. Aaron Achen is a short piece of gaming fiction. I thought it was superior to much of the fiction Dragon has published to date, and I'm sorry the author appears to have slipped off the map.

On to the regular articles! "Larger than Life" brings us D&D statistics for figures out of legend. In this issue, Joseph Ravitts tells us about the Righteous Robbers of Liang Shan P'o, a group of Robin-Hood-like outlaws from the Sung Dynasty. The characters are wonderfully evocative and could find a place in any campaign.

"Sage Advice" is back with the typical assortment of reader questions. These are growing in sophistication as players explore the corner cases of the game. For example, "A character with a vorpal sword decapitated an iron golem. This would negate the golem's special attack of poisonous gas, wouldn't it? Or can the golem still see and use its breath weapon after it is decapitated?" The answer? After decapitation, the golem's head remains alive and can still use its poison gas.

"Giants in the Earth" presents D&D statistics for characters out of literature. In this issue, Roger E. Moore describes the Four Lords of Demonland from E.R. Eddison's "The Worm Ouroboros" and Gaveral Rocannon from Ursula K. LeGuin's "Rocannon's World." This is a fun column, and I've enjoyed using NPCs from it in my game.

"Dragon's Bestiary" has three new monsters for D&D. First is the boggart by Roger E. Moore, which is now a staple in the game. Next is the stroan by Ed Greenwood, which resembles an enormous stink bug. Finally, we have the incubus by Craig Stenseth, which is the male counterpart to the succubus.

"Dragon's Augury" reviews two games. The Thieves Guild RPG by Gamelords contains "extensive detail and new ideas that will be of use to any player or DM." And Barbarian Prince by Dwarfstar Games is "the most satisfactory solo game that this writer has seen to date."

"Bazaar of the Bizarre" makes a welcome return, with a bunch of magical feather tokens by Ed Greenwood, the Skull Mace by Roger E. Moore, the Mace of Pain by Thomas Zarbock, and the Bottle of Undead by Bruce Sears.

Glenn Rahman is back with more "Minarian Legends." This time he is describing the history of Rombune, a nation born out of piracy. In "Simulation Corner," John Prados continues his game design series. Finally, in the "Electric Eye," Mark Herro has a computer quiz.

And that's a wrap! A strong issue, with the highlight being "Larger than Life." Next month, we have dinosaurs, a new D&D adventure, and one of my favorite covers!
Click to expand...

Supporter
A great cover with what look to me a bit like photo reference or photo clipped faces at the bottom. I wonder whose faces they are?

I need to check this issues Bazaar of the bizarre it seems.

Thanks once again for this superb series of articles.
I remember a TV programme that aired in UK in the late 1970s about the Righteous Robbers. It was called The Water Margin and very badly dubbed from the Chinese original, but still good fun.

GuyBoy said:
Thanks once again for this superb series of articles.
I remember a TV programme that aired in UK in the late 1970s about the Righteous Robbers. It was called The Water Margin and very badly dubbed from the Chinese original, but still good fun.
Click to expand...

I'm too young (heh, don't get to say that very often nowadays) to have watched it myself, but my parents saw it and thought it was hilarious (mostly for the terrible dubbing).

The Ed Greenwood article is notable for what has and hasn't changed in the Forgotten Realms pantheon in 40+ years. The human deities remain virtually unchanged, while the elemental lords seem to have been overtaken and replaced. Here we see Grome, Kakatal, Misha, and Straasha, lords of earth, fire, air, and water respectively. I don't recall those fellows having much of a presence in the game. (Edit: later in the article, Ed comments that these elemental lords have been pulled from Moorcock, and he expects them to be replaced by D&D versions at some point - looks like he was right).

Cavern Quest was AD&D, or are you using the D&D term generically in this series?

pauldanieljohnson said:
Very cool, though, is Ed's list of "cults of the beast", featuring Aslan the lawful good lion (seems like a direct lift from CS Lewis)
Click to expand...

He gets turned into Nobanion in later revisions.

Morfiedev said:
Cavern Quest was AD&D, or are you using the D&D term generically in this series?
Click to expand...

I remember playing through "Cavern Quest". Since by that time, I was almost exclusively a DM, I managed to score pretty high…

"Abomination" is one of the few pieces of fiction from Dragon I remember reading and enjoying.

Most of the adventures I ran were adaptions of published modules, and I never found the need to include either the "Larger Than Life" or "Giants in the Earth" characters. I always enjoyed them though, sometimes to the point of looking up the source material.

griffon8 said:
I remember playing through "Cavern Quest". Since by that time, I was almost exclusively a DM, I managed to score pretty high…

"Abomination" is one of the few pieces of fiction from Dragon I remember reading and enjoying.

Most of the adventures I ran were adaptions of published modules, and I never found the need to include either the "Larger Than Life" or "Giants in the Earth" characters. I always enjoyed them though, sometimes to the point of looking up the source material.
Click to expand...

Agreed. I remember one about the Bogatyrs of Old Kyiv, which has obviously resonated recently.

Everything about this issue is great, from the cover to the end of the articles....

Thanks for the article. Haven't had time to post until now, but I made time to read it as soon as I saw it. Enjoyable as always.