I launched the site on Jan 1st, 2001, originally under the name d20reviews.com (which is now a site about casinos, apparently), covering third-party D&D (d20 System) news, 7 months before Eric Noah closed his site, Eric Noah's Unofficial D&D 3rd Edition News. When Eric closed his site in August of that year, I took up the mantle of reporting the daily D&D news alongside the d20 System news I was already covering. I'm still doing that to this day, 20 years later, although I've expanded to general tabletop roleplaying game news in the last five years or so. I've reported on three (or five, depending how you count it) editions of D&D, the launch of Pathfinder, the creation of the Open Gaming License, the playtests and launch of 5th Edition, and hundreds more big stories in our little hobby.

EN Publishing was originally called Natural 20 Press, and was launched in 2001. In the 20 years since, we've published over 700 RPG products. Also in 2001, I founded the ENnies, which I owned until a few years ago when I decided to step away.

The community here is incredible. I’ve always believed that forums and the long-form in-depth conversation and moderated environment remained important in the face of social media, and I still do. It's incredible to think that back at the beginning of the century, the online D&D community was mainly in forums like this one; Twitter and Facebook didn't exist. We're still going strong, and we've even outlived one major social network! I’ve made lifelong friends in this community (though coming up to a year in lockdown now, I wonder when I’ll ever see them again!) People come and go, people return, new folks arrive, but the community is the core of this site.

When I started this site I was so young, and had no idea it would become my career. And somehow I'm still here, reporting the news. Anyhow, happy birthday to EN World! 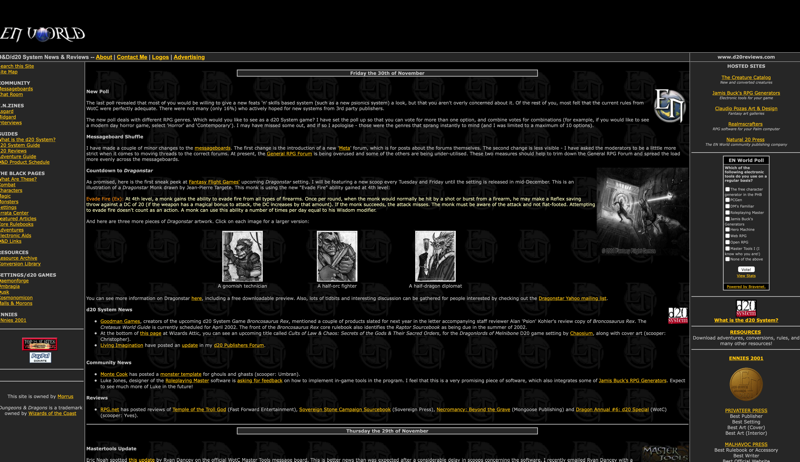 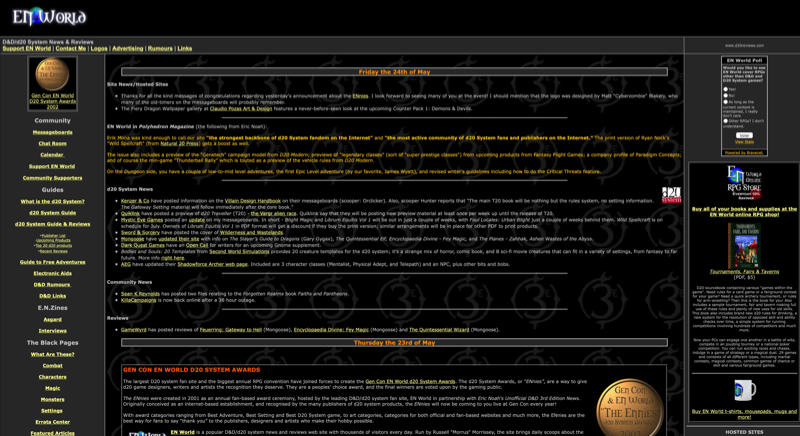 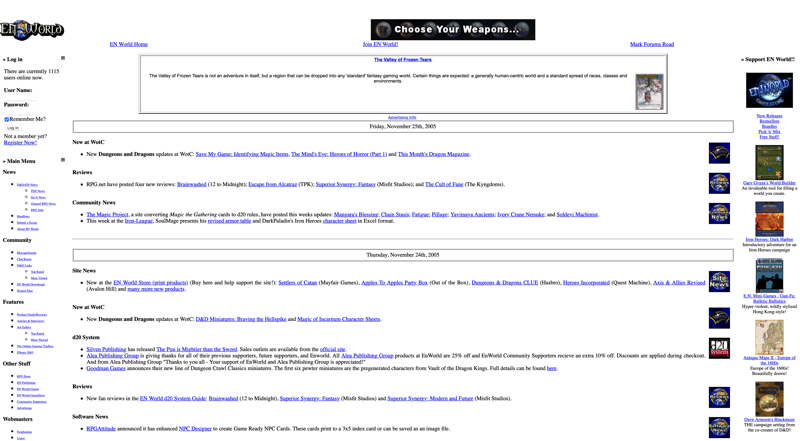 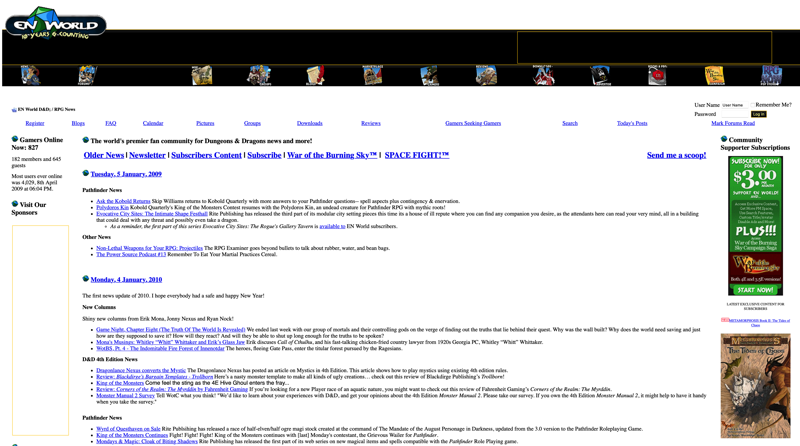 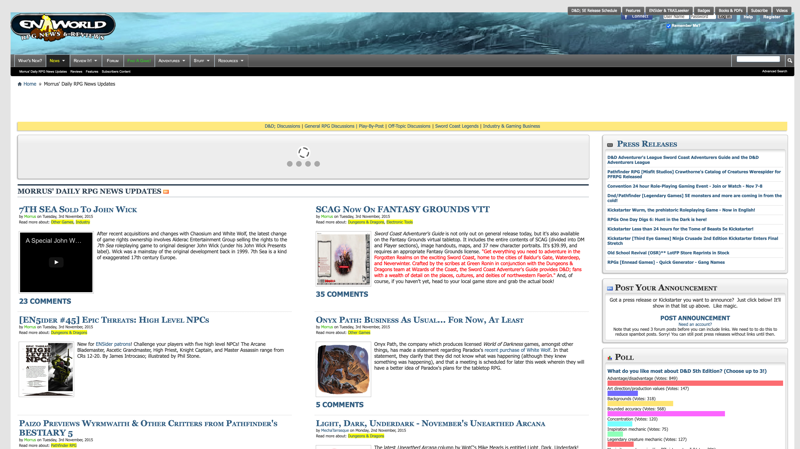 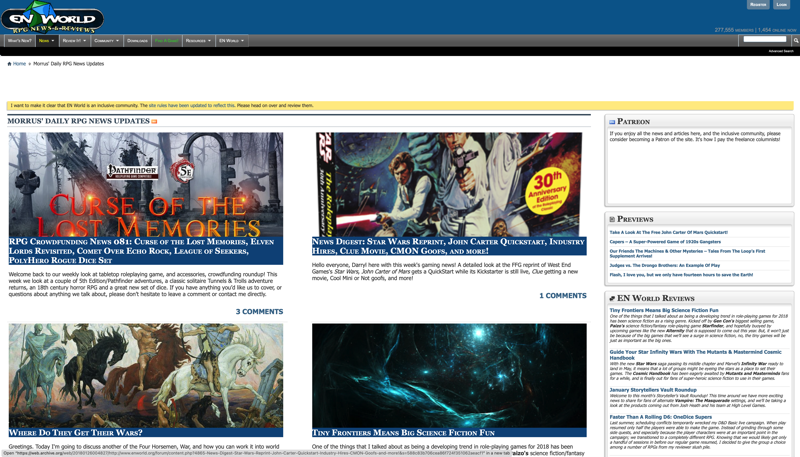 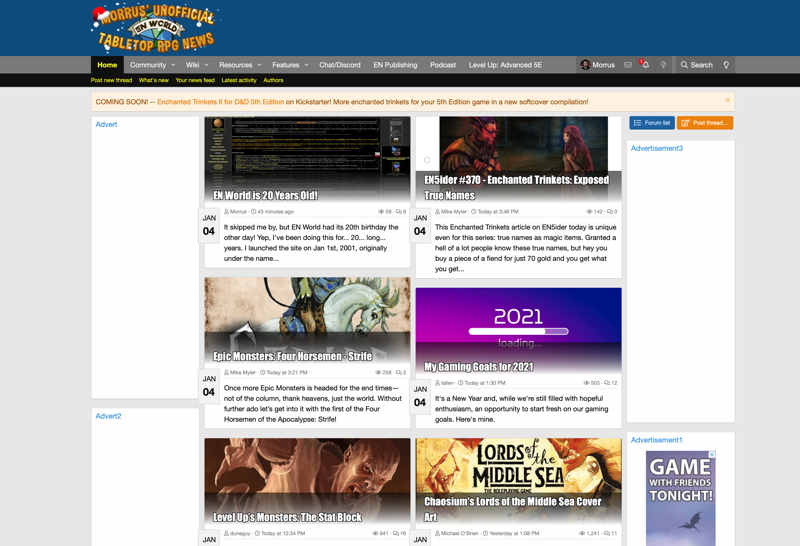 Seems like only yesterday. Mostly because I’ve forgotten many of the years since.

Congrats, the site can pick a new feat and gains an extra ability point!

I still remember the panic with @EricNoah announced he was shuttering his site and the forums and you swooped in to the rescue and ENWorld was born.

el-remmen said:
I still remember the panic with @EricNoah announced he was shuttering his site and the forums and you swooped in to the rescue and ENWorld was born.
Click to expand...

Eric’s site is preserved for all time!

Congrats! I owned a d20 Modern fan forum for about a year when Gleemax closed. It is a lot of work. Gamers and spammers are forces to be reckoned with!

One more year and ENWorld can legally drink in the United States.

That way back machine is so cool.

So ENWorld started out with light fonts on dark backgrounds. We used to have debates about the best aesthetic in those days. I always preferred the paper look.

Thanks to you Morrus, and to Eric Noah. I always liked and admired your demeanor, integrity, passion for the game, and even-handedness.

Congratulations on a job well done so far..

20 years? My goodness, I feel old. Happy Birthday, ENWorld! And congratulations and thank you, Morrus, for providing a daily stop and righteous community for two decades.

Congratulations! Running a site over 20 years and maintaining an active community is no small feat.
Plus, ENWorld works really well as a new aggregator for all things RPG.

I remember the good old days when the previews for 3E were being released periodically and how mind-blowingly transformative the switch from 2E to 3E was. And when Gary Gygax (RIP) would, comment in the forums here! Really magical times. Congratulations on taking it forward another 20 years!

I've been a forum member here for 18 of those 20 years and can honestly say it is the site I have spent the most amount of time on ever. Congrats to you, @Morrus, for giving us D&D fans the best place to discuss our game for the last 20 years!

Supporter
I lurked here for many many years before ever posting. I am sure there are many still like I was that appreciate it even if they don't say so.

An impressive achievement and huge source of inspiration! Congratulations! May the forums live long beyond 2021!

Great job over the last 20 years!!! I've been here since discovering Eric's site when it started while searching for info on the upcoming 3E, and then ultimately EN World. I've been getting my RPG News here ever since. I've never really been one for social media, I'm not on Twitter, Facebook, etc., and I'm not sure why I decided to jump into the forums 2 or 3 years ago but I'm glad I did and I check them at least daily. Hard to believe its been that long and here's to another 20 years!!