Once again Epic Monsters is getting kingly, though this time it’s with the living pharaoh, god of royalty, and deity of the sky: Horus! 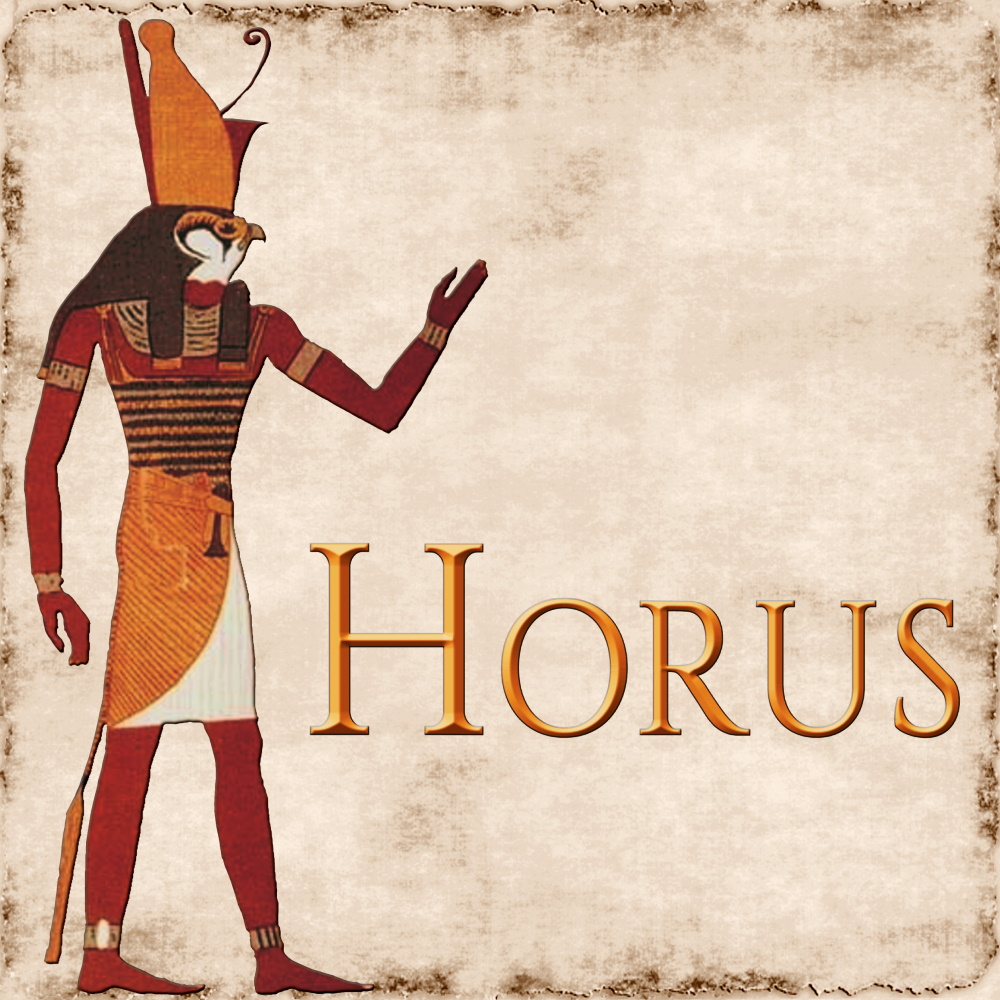 Horus (aka Her, Heru, Hor, or Har) is among the most recognizable and important gods in the Egyptian pantheon. After all this is the guy behind kingship and the sky! He is the son of Isis and Osiris (his heir), or maybe born by Hathor (who is also his wife). In the former case Isis retrieved her murdered husband’s body parts (except his penis, which was eaten by a catfish or crab in the Nile) and resurrected him (with a new member used to conceive Horus) then fled to the Nile Delta’s marshlands to escape Set (her brother and the god of the desert) which is where she gives birth. Horus takes many forms but typically gets depicted as a falcon or falcon-headed man. Historically his earliest form is as the (first national) god Nekhen in Upper Egypt—there it was thought that in life the pharaoh was Horus in mortal form, and in death the pharaoh was Osiris. Eventually he eclipses and becomes Osiris (“Golden Horus Osiris”)

Unsurprisingly Horus is a rival of Set. In addition to being the god of the desert (in opposition to the sky) Set murdered his mother and uncle (and at one point his father too). In their struggle for Egypt to see who would take the throne after Osiris, Horus eventually wins but loses an eye (although Set loses a testicle). Among their 80 years of conflicts there’s a bit of weird trickery in The Contendings of Horus and Set where Horus fools Set into eating his semen, among other tales. The last spat is a boat race where Horus wins by agreeing to make his vessel from stone, when really it’s wood he’s painted to look like stone—upon winning Set gives up his pursuit of the throne of Egypt. Sometimes the story ends with Horus controlling Lower Egypt and Seth controlling Upper Egypt, or Horus controlling all the areas of civilization while Seth reigns over the deserts and oases. Also of course scholars have tied these stories up with historical happenings in the politics of ancient Egypt.

Design Notes: There’s not a ton of information on exactly what Horus did in his battles with Set so we’re going to lean into his relative level of power, the warrior aspect, and the whole sky god thing. To that end Horus can zip across the battlefield incredibly fast, he’s rocking both Divine Action and Legendary Actions, and to cover the deific stuff we’re giving him some innate spellcasting along with the usual suite of traits. Because his eye is important to his mythology he can also bestow it on creatures and things (unlimited in the case of the latter), and to round things out we’ll give him a (badass) spear for his weapon. Plus work some enemy positioning effects into those Legendary Actions. Let’s do the numbers! The DMG swoops in at 27.8333 while the Blog of Holding lands at a higher 30.3333, averaging out to a final CR of 29.

Divine Action (Recharge 5–6). At the end of the round, Horus can move his Speed and take an additional action.

Innate Spellcasting. Horus’ innate spellcasting ability is Charisma (spell save DC 23, +15 to hit with spell attacks). He can innately cast the following spells, requiring only his pan flute and no other components:

Legendary Resistance (3/Day). If Horus fails a saving throw, he can choose to succeed instead.

Magic Resistance. Horus has advantage on saving throws against spells and other magical effects.

Skyfree. While Horus is in the air, difficult terrain doesn't cost him extra movement, and magic can neither reduce his speed nor cause him to be paralyzed or restrained.

Wedjat. Horus can use a bonus action to touch a creature, object, or surface and leave his holy symbol (a stylized eye), granting it several benefits until the symbol is removed or dispelled (treat the symbol as a 6th-level spell effect). Evil creatures have disadvantage on attack rolls against the target. It also can't be charmed, frightened, or possessed by evil creatures. If the target is already charmed, frightened, or possessed by an evil creature, it has advantage on any new saving throw against the relevant effect.
Horus can bestow an unlimited number of wedjat on surfaces and objects, and up to 9 wedjat on creatures. When Horus has bestowed his maximum number of wedjat on creatures, the oldest wedjat disappears as he bestows a new one.

Blasting Zephyr. Horus summons a powerful wind from the sky that blasts at creatures he chooses that are within 100 feet of him. Each creature must make a DC 23 Strength saving throw or be pushed 25 feet in a direction chosen by Horus.

Tempest Escape (Costs 2 Actions). Horus spins in place with incredible speed. Each creature within 20 feet of him must succeed on a DC 23 Dexterity saving throw or take 15 (2d8+6) bludgeoning damage and be knocked prone. A creature that fails its saving throw by 5 or more also drops whatever it is holding. Horus can then fly up to half his flying speed.

Horus is his Title, like Pharaoh is the Title of Tutankhamen or any of the Ramses.

His wife is Hathor, who has the head of a Bull because of the Contending.

The Contending happened after Osiris' death. All of the gods knew that Set had killed him and Ra was his heir. But Set, as Osiris' brother, had a claim to the throne. The remaining gods didn't want to pick sides, so they made Ra and Set compete against each other in a long series of challenges.

In -every- challenge, Set cheated. And when Ra pointed it out, they all had a good laugh at their Brother's shenanigans and set out a new challenge, declaring the previous challenge invalid.

During one such challenge, in which Ra and Set were fighting as Hippopotami in the Nile, Ra's wife Hathor decided to cheat on Ra's behalf! He was -so- furious at her that he cut off her head in a fit of rage and it was swept away by the Nile. Immediately regretting his actions, he lopped the head off a nearby cow, slapped it on her shoulders, and apologized.

Ra eventually beat Set in the Contending, then let Set have his sexual way with Ra's backside as a consolation for losing... that... uh... gets into a different story involving poison, salad, and Set having a disc appear on his forehead... I'm not making this part of the story, up, either. It's part of why the Stargate TV show had characters with golden discs on their forehead...

During the New Kingdom Era, a lot of the Old Gods were kind of combined in an attempt to make things clearer, sort of like the various comic book reboots when things get too convoluted 'cause people were actively writing new myths about the gods on the Regular.

So Isis wound up gaining some of Hathor's traits, specifically the horns of a cow while she retained the Sun Disk of earlier works. But in the "New Canon" the Contending didn't actually happen. Or if it did, it happened differently.

That's also about the time they largely swapped over to just calling him by his title, Horus, though they still used the Eye of Ra as an important symbol.

This slurry of info brought to you by: Someone who did -way- too much research to make a City of Heroes character.

Zarithar said:
Not a fan of statting out literal deities as "monsters" the characters can fight. Not for me I guess.
Click to expand...

I’m a fan of it, but I do prefer they be a bit stronger.

Sacrosanct said:
I know it's a long standing column, but with how our industry has been evolving over the past few years, I wouldn't touch this with a ten foot pole. Take someone's religion to stat out their religious icons for the PCs to kill?

"Oh, my fighter is a legionnaire, so I get automatic double damage vs. Jesus, right?"

No thanks. There's cultural appropriation, and then there's turning it up to 11 lol. It's also dangerous, and there are people that are killing others in real life due to insulting depictions of their religious icons.

Just because it has stats doesn’t mean it is just there to be killed by the PCs.

I also don’t see anything wrong with a fantasy legionnaire killing a fantasy Jesus. We have to be mature enough to separate fantasy from reality

Uni-the-Unicorn! said:
Just because it has stats doesn’t mean it is just there to be killed by the PCs.
Click to expand...

You must not have been playing D&D very long

As an aside, I recall an interview a while back with Jim Ward and he said the biggest thing that gave him pause about statting up the gods in Deities and Demigods was because he knew that meant players would try to kill them, and it didn't seem right

Sacrosanct said:
You must not have been playing D&D very long

As an aside, I recall an interview a while back with Jim Ward and he said the biggest thing that gave him pause about statting up the gods in Deities and Demigods was because he knew that meant players would try to kill them, and it didn't seem right
Click to expand...

I played a little in the 90s, didn’t play for years and picked it back up fairly recently.

I realize some people will want to take on anything with stats, but that isn’t everyone