On today’s Epic Monsters post we’re going after the Devil of Leeds or as it is more commonly known: the Jersey Devil! 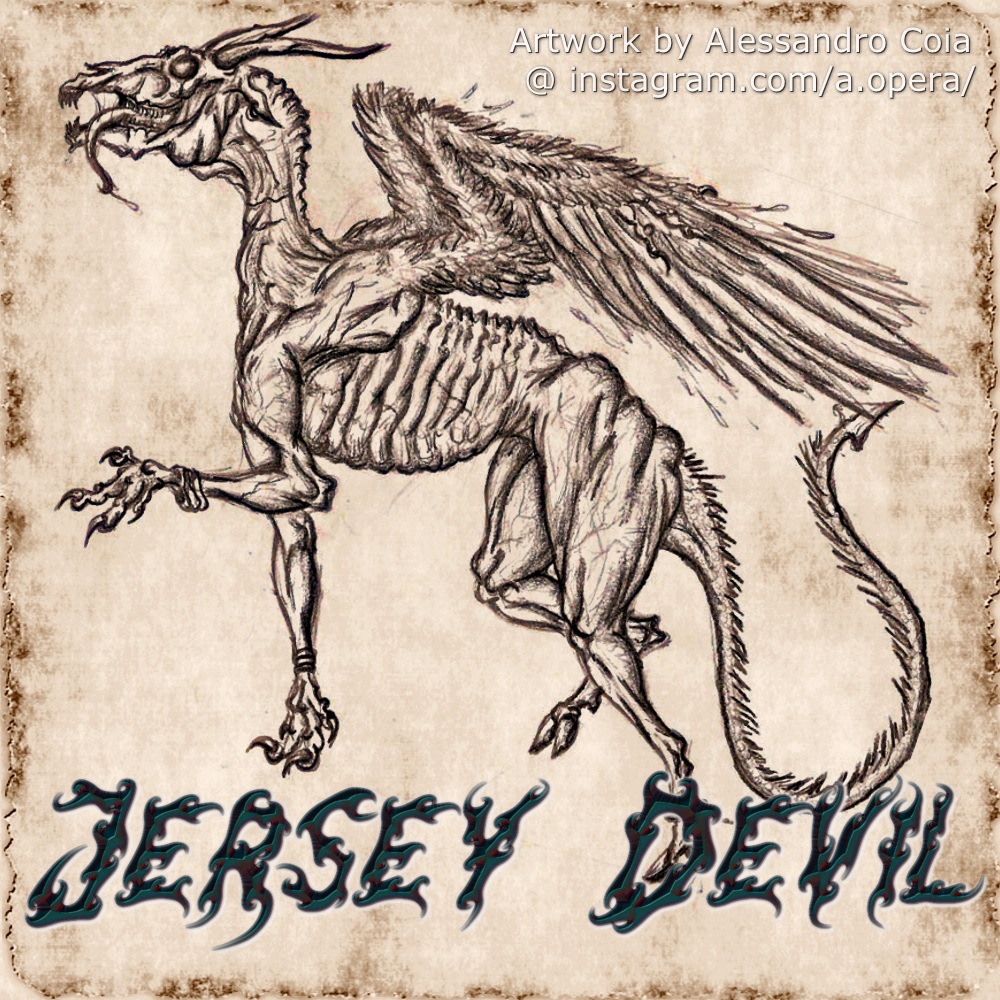 If you know about this creature at all you probably know it as the Jersey Devil, a winged bestial demon picking of people in the state of New Jersey. What you might not know is the ridiculous complexity of how it got its original name: the Leeds Devil. First though let’s get the most common origins for this thing out of the way—a woman with a dozen children is real tired of the whole child-rearing thing and curses her 13th which, when it comes out of her, transforms into a monster, kills the midwife, and flies away. Also alternatively maybe she was a witch and the father was Satan.

What’s all this Leeds Devil business?
1) It originated in Leeds Point (now Atlantic County NJ)
2) It’s thought that Deborah Leeds was the woman in the story above (her husband Japhet’s will and testament has 12 children)
3) It could be from mud-slinging between Benjamin Franklin and his rival in the publication of almanacs, the Leeds family (Daniel for which Leeds Point was named and his son Titan). This Daniel Leeds fellow was a Quaker but got cast out for putting too much heretical astrology into his books, which in turn got endorsed by the British royal governor and not long after he’s labeled by the Quakers as evil. His son Titan Leeds takes over the business then as a joke Benjamin Franklin offers an astrological prediction of this guy’s death. Titan is super offended, the spat escalates, and then Ben starts referring to him as a ghost (continuing to do so after Titan’s actual death). To top that off the Leeds family crest has some imagery similar to the descriptions of the Jersey Devil (and it’s not like crests were really popular in colonial times what with all the anti-British sentiment).
4) The myth is popular in the Pine Barren area and there’s historically discrimination against “pineys” as being criminals (including two embarrassing eugenics studies).

All that aside there are two excerpts from the Wikipedia page worth mentioning here (along with the Jersey Devil’s apparent friendship with the ghost pirate Captain Kidd). This craziness happened:

During the week of January 16 through 23, 1909, newspapers of the time published hundreds of claimed encounters with the Jersey Devil from all over the state. Among alleged encounters publicized that week were claims the creature "attacked" a trolley car in Haddon Heights and a social club in Camden. Police in Camden and Bristol, Pennsylvania supposedly fired on the creature to no effect. Other reports initially concerned unidentified footprints in the snow, but soon sightings of creatures resembling the Jersey Devil were being reported throughout South Jersey and as far away as Delaware and western Maryland. The widespread newspaper coverage created fear throughout the Delaware Valley prompting a number of schools to close and workers to stay home. Vigilante groups and groups of hunters roamed the pines and countrysides in search of the Devil. During this period, it is rumored that the Philadelphia Zoo posted a $10,000 reward for the creature. The offer prompted a variety of hoaxes, including a kangaroo equipped with artificial claws and bat wings.
Click to expand...

Then the hoaxer with the kangaroo who might well be an american hero?

Norman Jeffries, publicist for Philadelphia's Arch Street Museum and renowned hoaxer, was well aware of the stories about the Jersey Devil. So when the museum proprietor, T. F. Hopkins, admitted that it was in danger of closure unless Jeffries came up with something to boost attendances, the publicist decided that a captive Jersey Devil would be the ideal crowd-puller.

He also planted nonfictional newspaper stories about new sightings of the Devil. During 1909, Jeffries with his friend Jacob Hope, an animal trainer, purchased a kangaroo from a circus and attached artificial claws and bat wings onto it with glue. They declared to the public they had captured the Devil and it was displayed at the museum. Twenty years later, Jeffries admitted to the hoax.
Click to expand...

In closing, I’ll let you all know that I’ve spent enough time there to tell you that this monster is definitely New Jersey.

Design Notes: There’s not much said about this thing except that bullets and cannonfire are ineffective against it so I tried to make both ends of that plausible. Aside from that it’s got some staying power and using Blood-Curdling Scream with grappling makes for a fun encounter.

Blood-Curdling Scream (Recharge 4-6). The Jersey Devil emits a horrific screech. Each creature within 60 feet of it that can hear it must succeed on a DC 14 Wisdom saving throw or be frightened until the end of the Jersey Devil’s next turn. While frightened by Blood-Curdling Scream, a creature must take the Dash action and move away from the Jersey Devil by the safest available route on each of its turns, unless there is nowhere to move. If the creature begins or ends its turn in a location where it doesn't have line of sight to the Jersey Devil, the creature can make a Wisdom saving throw. On a successful save, it is no longer frightened.
Last edited: Aug 13, 2019
Click to expand...

Very fun - thank you for sharing!

Great write up. As a New Jersey native (and a fan of the Devils, who were named for the creature despite playing in northern New Jersey not the pinelands) I've always had a certain fondness for this Devil. I'm going to have to use this.

oknazevad said:
Great write up. As a New Jersey native (and a fan of the Devils, who were named for the creature despite playing in northern New Jersey not the pinelands) I've always had a certain fondness for this Devil. I'm going to have to use this.
Click to expand...

Same here! I almost expected a picture of Scott Stevens to be included in the post!

Clearly, this legend had to originate in the pork-roll-eating part of the state, as the Taylor ham regions would never fall for this.

Very cool. I'd like to use this for some unique local legendary monster in my homebrew world of Alterra. I'll call it either the Camford Devil or the Oxbridge Devil, a creature that haunts the deeply wooded areas just outside of one of the two dueling rival university cities, with the stories of the creature spread by the students (yes, I did that.)

I've always liked the idea of using these kinds of modern monster/"cryptid" type creatures for D&D. I can't recall if you have or not, but did you happen to do a writeup of The Slender Man? I've always thought that was a cool monster for a more horror-themed D&D game, and back in Pathfinder campaign that I ran a few years ago I used stats for it that I found linked on the official Pathfinder forums, a fan-made PDF called The Tome of Slenderotica. I've always liked the idea of it being some kind of dark, twisted Fey Aberration that abducts children, the mentally challenged, and socially isolated individuals and steals them away into the woods, but only after terrorizing them with fleeting glimpses and nightmares that drive them mad with an obsession with the monster, to the point that, by the time they're taken, they're almost actually gleeful about it.

On the same note, there are quite a few of the more unusual yokai that would be very interesting to see as some of your writeups, especially the one with more modern Japanese urban legend origins. Also, I recently remembered reading an old Forgotten Realms novel back in the early '90s, The Night Parade, so I decided to look it up online a few weeks back and was totally surprised to discover that the idea (and actual name) of the Night Parade actually originated in Japanese yokai mythology. So something along those lines; either a writeup of the Night Parade itself as an event/occurrence that the PCs could encounter, or just stats for more yokai that could be included in a Night Parade event, would be very interesting writeups to see from you.