Today Epic Monsters is taking a look at the working man’s man of steel, a corporatist product of fakelore from the Steel City that never quite found its way entirely into the realm of America’s mythology. If you already know who it is, you get a gold star because this one is pretty obscure: Joe Magarac! 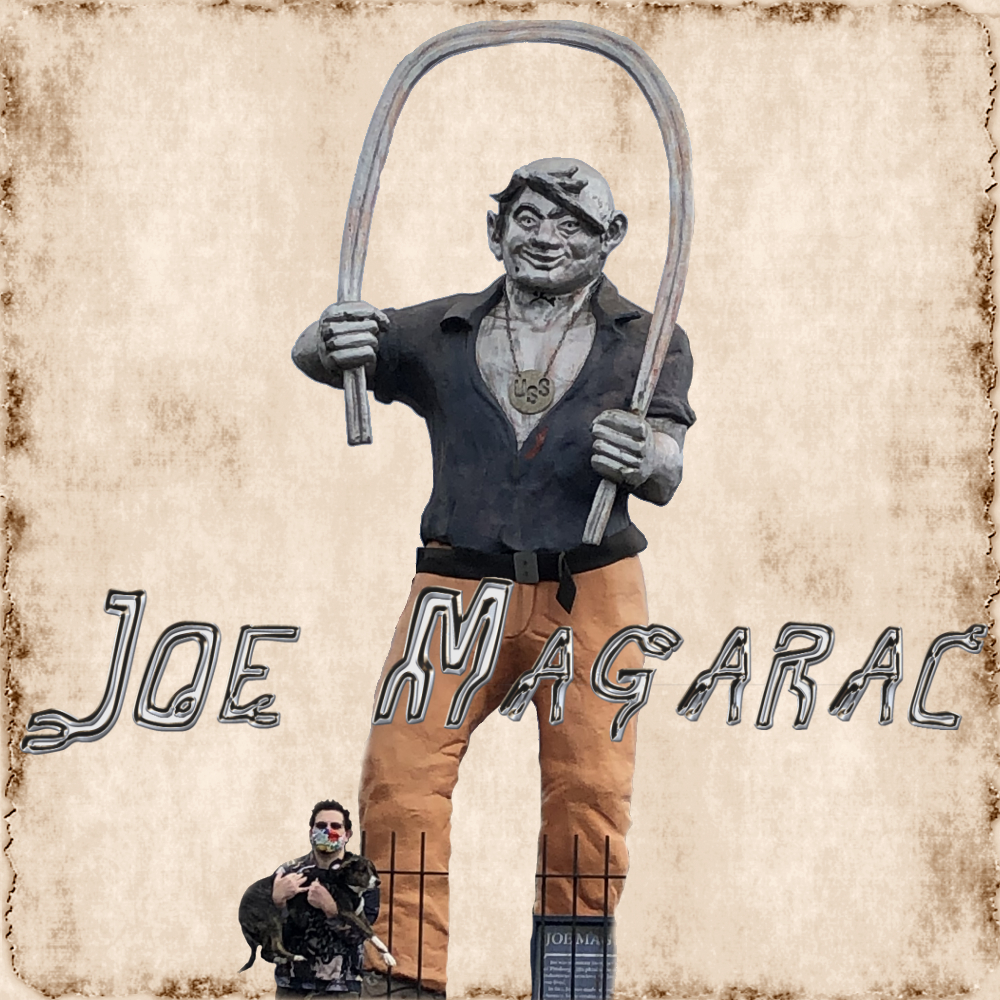 I feel that we absolutely must acknowledge that Joe here is obviously just popping and ready to cut it up on the disco floor like nobody’s business. Straight up macking! I’m sure it’s a bit stunning to learn that he’s not being featured in this column for his remarkable fashion sense. You’ve also probably noticed that unlike the other posts, this features a recent photograph—that’s because I live a 15 minute drive away from this guy! Also there’s Pepper in the mix because she’s just swell. Thanks to milady Stephanie for taking the photo.

So who is this obscure steel man? The first recorded appearance of Joe Magarac (and likely the first ever) is in Scribner’s Magazine in 1931. He is purportedly a Bohemian, Croatian (his name means “donkey” in Croatian), Hungarian, or Serbian laborer who could do the work of 29 men, every day of the year, every hour of the day, and that he refused wage increases or proposals to wed—because he just wanted to work. He could do these amazing things because Joe here was born in an ore mine and made out of steel. Tales of his exploits saving steelworkers from danger and kicking ass at the forge (were intended to) spread across the American midwest’s industrial cities through the nation’s many steel mills in the days of yore.

As a lifelong Pittsburgh native I can tell you that this makes a ton of sense (there is an insanely prevalent blue collar work-till-you-die-and-then-work-some-more mentality here), but oddly I hadn’t ever heard of Joe Magarac before a few weeks ago. That’s because the “myth” never really took off and instead Joe became a sort-of icon for the United States Steel Corporation, including some comic books and obviously this big statue out in Braddock, Pennsylvania. Like any homegrown mythology however there’s always some local flavor, and I’ve got something you can really bite into for Joe. This is from a recent conversation with an old schoolmate:


My grandpa told me growing up that it was his brother, Joe Muradjac, who was the real Joe Magarac all the stories were about. He had died at the Homestead Works pretty young and was super-strong. He said people always would talk about that Hunky Magarac kid because they couldn't pronounce "Mah-ray-dah" (some Slavic reason for the "c").​
Normally this is the kind of vague historical remark that I’d ignore but I can’t understate to you how big Ben and his brother Josh are. They are huge. For reference I’m just a bit over 6 feet tall. Josh in particular is a walking giant at least a head and a half taller than me, twice as broad across the shoulders (I do not have narrow shoulders), and he could stand in for The Mountain on Game of Thrones. I’m not kidding—I watched him deadlift so much weight the lifting bar bent like a bo-staff. It was terrifying. I was afraid it’d break and the whole room would turn into a bloodbath. I still think about it, obviously. Just terrifying. Guy turned down full-ride scholarships to play contact sports (and is now a doctor, bless his obviously gigantic soul). Given the truly enormous size of his purported descendant, I am inclined to admit that it is very possible that there might have been a real Joe ‘Magarac’ in the Pittsburgh steel mills one day not so long ago. Hopefully a better, proper historian will come along some day to confirm it!

Design Notes: Alright let’s sit down and make Colossu–er, Joe Magarac! A trait to cover his incredible laboring strength plus some high scores in that as well as Constitution, a natural armor equal to the AC of steel, resistance to just about everything, being a walking weapon without meaning to, and then an area attack to keep things lively along with something special for when he really clocks somebody so they’re left with their head ringing for a bit. Protector sneaks in at the end because ostensibly that was his thing (saving steel workers from mishaps and injury). Let’s look at the numbers! I really wanted to bring him in at a lower CR (under 8) but that just wasn’t meant to be and after numerous little tweaks dialing things down, the DMG came in around half a point above 11 and the Blog of Holding a wee bit beneath that, so Joe Magarac’s final challenge rating is 11.

Working Back. Joe counts as Gargantuan size when calculating his carrying capacity (2,640 pounds).

Unarmed Strike. Melee Weapon Attack: +10 to hit, reach 5 ft., one target. Hit: 8 (1d4+6) bludgeoning damage. On a critical hit, the target makes a DC 18 Constitution saving throw. On a failed save the target is deafened for 1 minute and stunned for 1d4 rounds, or deafened and stunned for 1 round on a successful one.

Thundering Hands (Recharge 5–6). Joe slams his hands together in a cacophonous strike that sends out a wave of energy in a 30-foot radius. Each non-metallic creature in the area makes a DC 18 Constitution saving throw, taking 21 (6d6) thunder damage on a failed save, or half as much damage on a successful one. A creature that fails its saving throw by 5 or more is also knocked prone.


REACTIONS
Protector. When a creature Joe can see within 5 feet is targeted by an attack, spell, or other effect, he can use his reaction to impose disadvantage on the attack roll, or grant the creature advantage on its saving throw to resist it.

And here I thought Joe was the guy with the "red nose" and the dog in the pic.

Weiley31 said:
And here I thought Joe was the guy with the "red nose" and the dog in the pic.
Click to expand...

A friend of ours sent masks and I am fond of the comic-book print one. When fall comes around I'll get something more appropriate for my (heavily obscured by doggo) chaos space marine hoodie.

I like this guy waaaaaay better than Steely McBeam! Get the Steelers on the line!

Being from central Pennsylvania its pretty cool seeing a Hunky legend here. Never heard of him so you've sent me a'googlin

Just in case anyone thinks you're joking about Steely McBeam—we are not so lucky.

my parents once purchased an Encyclopedia collection which came with a complementary collection of classic books. One of those books was an anthology of American Tall Tales including Joe Magerac the Pittsburg Steel Man.

I once used him in a Supers game and he very much was a copypaste of a certain Russian X-Man with the added flavour of throwing molten steel.
Last edited: May 26, 2020

I love it! I actually had heard of Joe before, having come across him in an article a few years ago and then reading his Wikipedia article. I was also quite surprised that I'd never heard of this Pittsburgh Paul Bunyan of Steel before; while I don't live in Pittsburgh, I do live only 2 1/2 hours away, have plenty of friends and family who live there (my brother worked making sandwiches at Primanti's for several years... their bacon sammiches are awesome), once for a few months dated a girl who lived there (the first girl I ever dated, what a humiliating disaster that turned out to be) and have visited there quite often (bar hopping across South Side is a familiar event.)
Last edited: May 26, 2020

augh the South Side is the worst

Eis said:
I like this guy waaaaaay better than Steely McBeam! Get the Steelers on the line!

Being from central Pennsylvania its pretty cool seeing a Hunky legend here. Never heard of him so you've sent me a'googlin

You're probably not very far from me.

Aaron L said:
You're probably not very far from me.
Click to expand...

No not far! Bellefonte area here!

Mike Myler said:
My grandpa told me growing up that it was his brother, Joe Muradjac, who was the real Joe Magarac all the stories were about. He had died at the Homestead Works pretty young and was super-strong. He said people always would talk about that Hunky Magarac kid because they couldn't pronounce "Mah-ray-dah" (some Slavic reason for the "c").
Click to expand...

As a side note, 'magarac' is pronounced MAH-gah-rats. Letter 'c' (without diacritics) in Croatian (Bosnian/Montenegrin/Serbian) always gives the 'ts' or 'tz' sound (a voiceless alveolar affricate, according to Wikipedia), as opposed to 'č' (a harder version of English ch) or 'ć' (a softer version of the same sound) [I'm not sure if letters with diacritics will show properly].

According to the recent data, surname Magarac is present in modern-day Croatia, but most (if not all) people bearing that last name are ethnic Serba. Surname Muradjac does not exist in Croatia. It could be misspelling of Mađarac (Madjarac, MAH-jah-rats) or one of its variants, meaning Hungarian (as in person) or Magyar.

Also, if I remember my history correctly, a lot (most?) of people from modern Croatia (then (Kingdoms of) Dalmatia and Croatia-Slavonia, who belonged to Austrian and Hungarian halves, respectively, of Austro-Hungarian Empire) who emigrated to the USA went to Pennsylvania. For those emigrating from Dalmatia, this was allegedly mostly because of peronospora epidemic destroying a huge part of Dalmatian vineyards (then the most important agricultural sector in the region).

I know him because this isn't the first time he's been written up in RPG terms … you can find him in Michael Surbrook's Larger Than Life, available in HERO System, Savage Worlds, and Mutants & Masterminds 3E editions.

Supporter
I like the write up, but I loved the backstory.

Right?! Ben posted that bit on my FB wall or something when I put up the photo and I immediately asked if I could quote him because whaaaat yes I believe you and your seven foot tall obviously part-giant brother.

Mike Myler said:
Also yeah I was pretty excited that we get something other than "creepy railroad tunnel man" or "storm hag from the nearest Great Lake"

Don't forget the Phantom Bomber, the Congelier House, or the Shadyside Ninja.

Oh they figured out the Phantom Bomber last year I think (it was on the news for some reason or another) and the Shadyside "ninja" was just some idiot mugger who gave up after he got is ass whupped by a would-be victim.

The Congelier House, however—I might be able to do something with that.