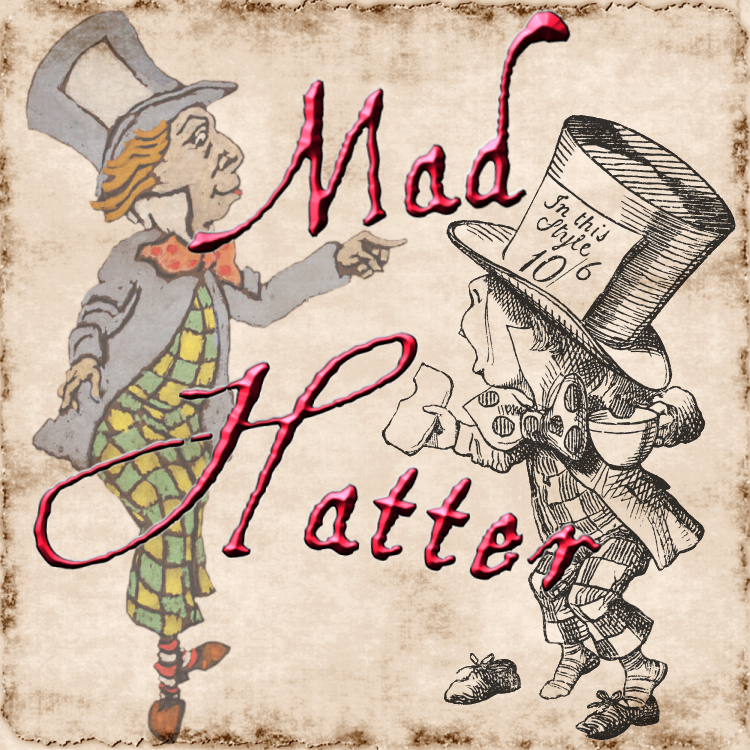 In Alice’s Adventures in Wonderland the protagonist stumbles upon the Mad Hatter amidst a tea party with the March Hare and the Dormouse. He is in fact always having tea, stuck by Time forever so as to avoid decapitation for trying to sing in front of the Queen of Hearts. As his name implies, he is very eccentric and nonsensical, acting with very little rhyme or reason. Later on he briefly appears in the trial of the Knave of Hearts as a witness, and then in the sequel (when interpreting the character of “Hatta” as the Mad Hatter) as a messenger of the White King and convict of crimes-to-be-committed.

Note: We’ve got the Cheshire Cat too! Also the term “mad hatter” originated in the textile industry (including hat making) where exposure to mercury often led to a variety of ailments. The afflicted were often sent to asylums where they would farm, put on plays, and yes—have tea parties. Also a reminder that we’ve got an Easter Bunny and a far-superior build on my website (so we’ve technically got LOTS of Easter Bunnies.)

Design Notes: The following statistics seem pretty simple on the outset because they’re short, but this is probably the most complicated entry yet. So the Mad Hatter here is like a Schroedinger’s Box-monster: he’s only really moved through and to a space after he’s moved through one of two routes, which he chooses at the beginning of each turn. To effectively fight him, adventurers need to be anticipating and targeting both his potential routes! It is strongly recommended that this NPC only be used in fights by himself or with very limited, very simple creatures alongside him. Let’s do the numbers! The DMG came in at 6.25, the Blog of Holding at 7.4, and together that rounds out to Challenge Rating 6. Fortunately he’s not dealing a ton of damage so should make for an interesting boss fight tier 1 play!

Evasion. When the Mad Hatter makes a Dexterity saving throw to reduce the damage of a spell or attack, on a success he takes no damage and on a failure he takes half damage.

Mike Myler is a freelancing RPG goblin (or goblin that freelances for RPGs?), regent, the editor for the excellent EN5ider Patreon, and the Project Manager for Level Up: Advanced Fifth Edition. You can also find his marks in the N.O.W. book for the What's Old Is New RPG, on www.mikemyler.com⁠ (which has the neatest collection of free content around as well as links to his 6 hardcover campaign settings), and here on ENWorld in ENterplanetary DimENsions. What's next? The Oops! All Dragons | 45 dragons for D&D 5E and Level Up 5E Kickstarter ENDS this week! https://tinyurl.com/oops-all-dragons
R

If the former, I think it should be specifically stated. If the latter, I can't imagine the party not having some ranged attack or spell that could reach Hatter.