We’re off again to the American Wild West, taking on a legend as big as big can get. Epic Monsters is proud to deliver to you the twister-riding river-making storm-lassoing fakelore hero known to mortals as Pecos Bill! 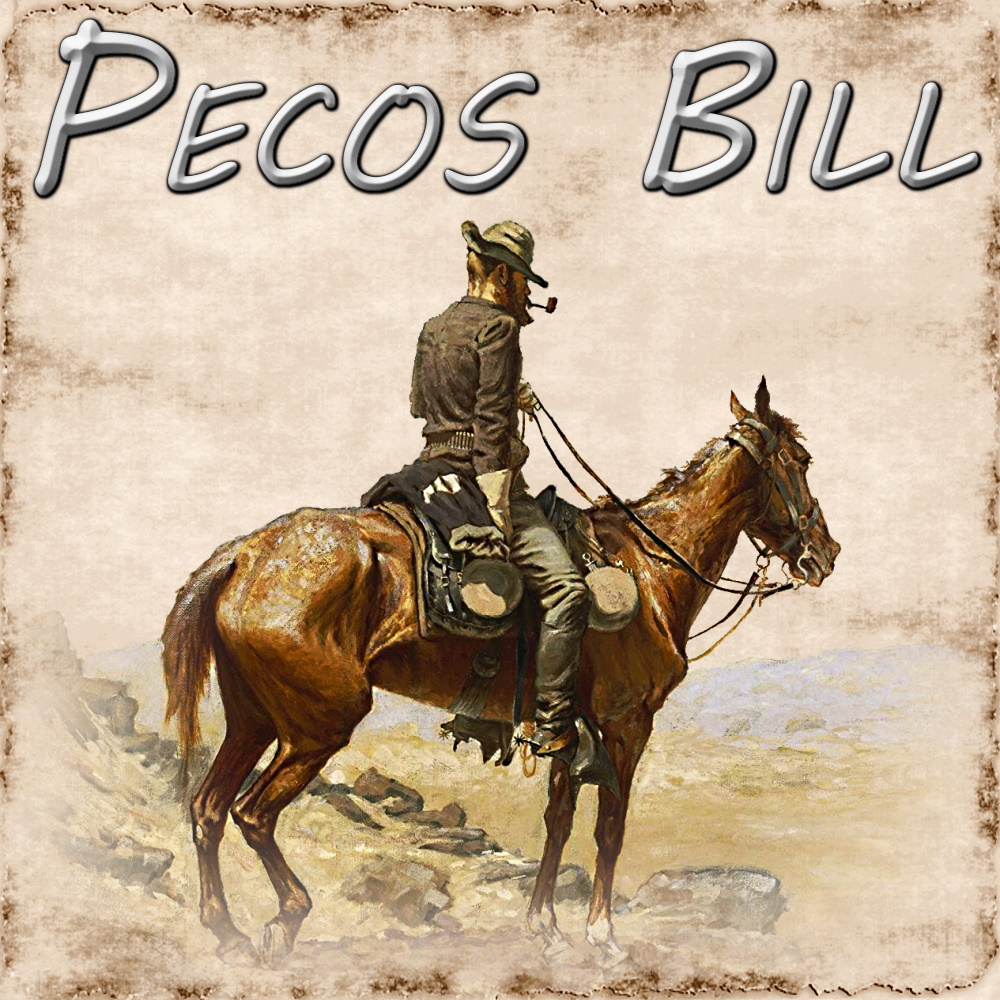 Despite being a total fiction invented by Edward S. O'Reilly in the early 1900s, the legend of this iconic cowboy has become rooted in American culture—in other words, he is a product of fakelore like my yinzer buddy Joe Magarac. Said to be born in the 1830s, or sometimes in 1845 (the year Texas became a state), Bill’s family left their town for more solitude but along the trail he fell out of the wagon near the Pecos River. Fortunately a pack of coyotes found him and raised him until his real brother returned to find him. Pecos Bill grew into a fine cowboy, able to use a rattlesnake (Shake) as a lasso or another serpent to whip with.

The legend of Pecos Bill also invariably means the legend of Widow-Maker as well (occasionally called Lightning). This horse was notorious for killing riders it felt were unfit, though of course was no match for the mythical cowboy, and when he wasn’t riding it he had a cougar for a steed instead. Among some of Pecos Bill’s other more ridiculous exploits are the frequent eating of dynamite, lassoing and riding a twister, wrestling a 40-foot long serpent (the Bear Lake monster) for days, shooting all the stars from the sky (except for the Lone Star, because Texas), lassoing a stormcloud in California to end a drought and create the Gulf of Mexico, and using a stick to dig the Rio Grande River to slake his thirst (or sometimes that’s from Widow-Maker’s staggering murderous trail). The nature of his demise is also of course different depending on the tale—maybe it was an after meal drink of barbed wire and nitroglycerin, maybe it was laughing himself to death at the sight of a city boy in gator attire claiming to be an outlaw cowboy.

Pecos Bill also has a paramour—Slue-Foot Sue—but we’re saving her and her exploits for another day. Interestingly enough, his legend has not been limited to the United States and cowboys in Australia and Argentina have embraced him as well.

Design Notes: This tall tale is a bit of a tall order. We pretty much need to have Widow-Maker in the mix and are taking a simple solution: reskinning a triceratops. Then to give him that legendary flair Pecos Bill is getting himself some Legendary Resistance, along with a slieu of nice bonuses for cowboy-appropriate saving throws, plus Superb Aim thrown on top for gunfighting. After that it’s the weaponry, which aside from Shake the Rattlesnake (a bit of a sleeper but his most effective attack!) is pretty standard. Then finally we’ve got the lassoing things that normally cannot be lassoed. Let’s do the numbers! The DMG cruised in at 17.5 and the Blog of Holding a bit higher at 18.66, which together averages out to just a smidge past CR 18.

Deadly Steed. Pecos Bill can use a bonus action to whistle for his steed, Widow-Maker. The horse appears within sight at the end of his turn, and moves to be adjacent to him at the start of his next turn. Although it is a horse, Widow-Maker uses the statistics for a triceratops with the following changes: it only takes up the space of a Large-sized creature, its speed is 80 feet, and it has no gore attack.

Legendary Resistance (3/Day). If Pecos Bill fails a saving throw, he can choose to succeed instead.

Nothin’ To It. Pecos Bill has advantage on ability checks (including initiative).

Raised by Coyotes. Pecos Bill can understand and be understood by coyotes (as the speak with animals spell).

Incredible Lasso. Pecos Bill can use an action to throw a rope or snake to lasso a creature, environmental phenomenon, or object that he can see. The target becomes grappled and restrained (escape DC 18). If the target is a creature, it can make a DC 20 Dexterity saving throw to avoid the lasso. No matter how large, heavy, incorporeal, or intangible the target is, once lassoed Pecos Bill is able to drag it. In addition, he is able to treat it as a solid object regardless of what the target is, including riding a tornado like a steed or dragging a storm cloud.

Love it! Cant wait to see Slue-foot Sue riding on her catfish

My head canon is that however Bill died, it was in 1913, around the same time as The Wild Bunch is set.

I should note that I talked to no fewer than three Texans to make sure I got this one right!

(I know a lot of Texans)

MNblockhead said:
You give Pecos Bill CR 18 and Paul Bunyan only CR 11, I think you know TOO MANY Texans. ;-)
Click to expand...

The boss had me re-do Paul Bunyan as an Epic Monster (a version without any class levels) for the book. 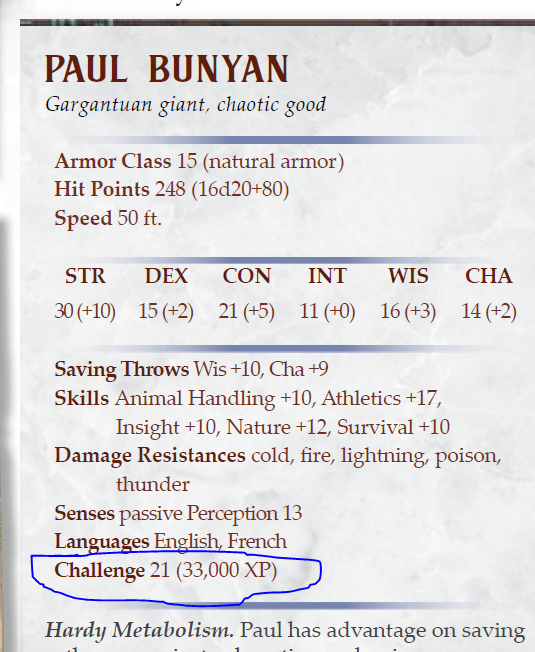