Today’s entry in Epic Monsters is another hero of tall tales from Texas: the wife of Pecos Bill and remarkable cowgirl Slue-Foot Sue! 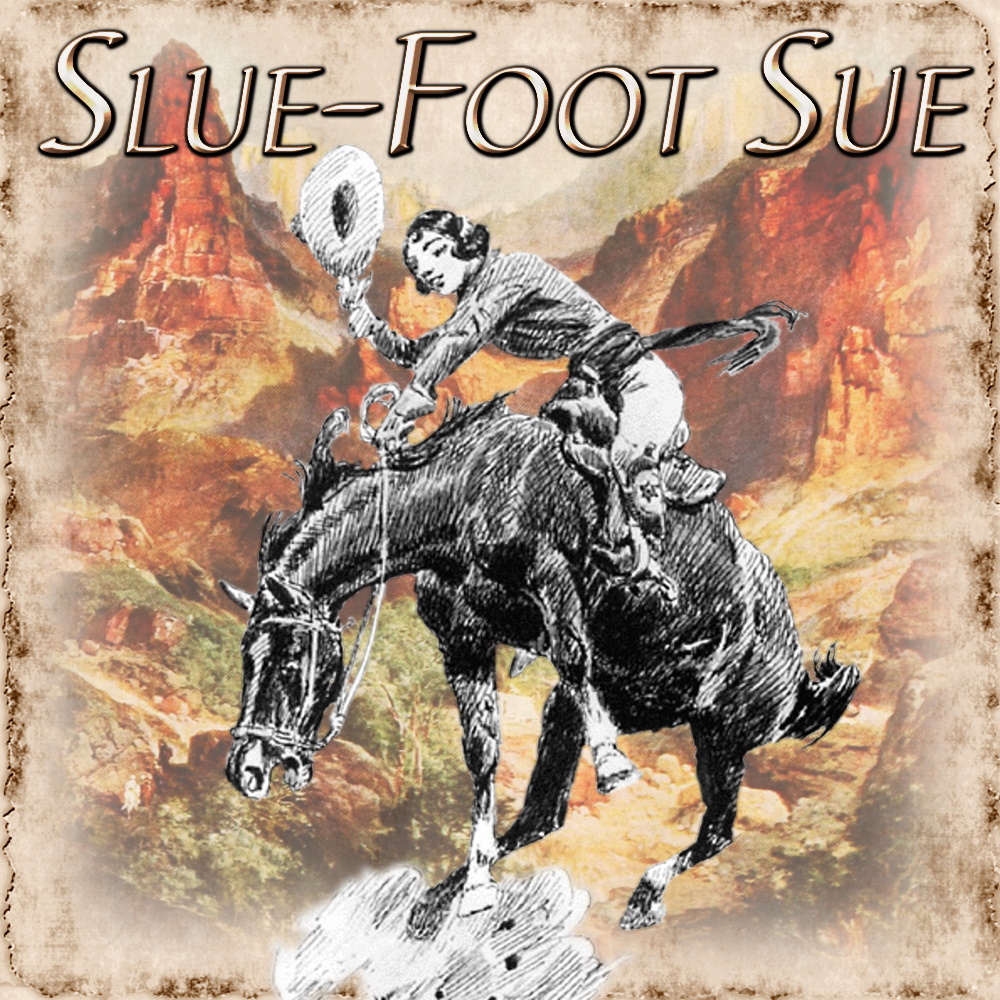 A few weeks ago we did Pecos Bill but the hero of the Lonestar State did not ride alone, and his paramour was just as impressive as he was and integral to many of his tall tales. For instance when he shot out the stars from the sky—except for the Lone Star, thus the state’s nickname—it was part of his marriage proposal to her after their courtship. This wasn’t the only woman Pecos Bill loved, but she is known as the lady he loved most. What happens after their marriage (or during it, depending on the person telling the story) isn’t quite so starry. Slue-Foot Sue caught his eye while riding a catfish down the Rio Grande, and she darn well wanted to try riding Widow-Maker too. The infamous horse wasn’t so keen to that though, and threw her off out of envy that someone else should take away the attentions of his beloved owner. Unfortunately for Slue-Foot Sue when she lands she just bounces back up again, higher and higher. What comes next changes a lot but rarely ends well with a happily reunited marriage; Bill and Sue bounce away never to be seen again, she stops bouncing but the trauma of her experience forces her to leave him, unable to stop the phenomenon he chooses to shoot her rather than let her starve to death.

She’s got her own stories too, mind you. In Slue-Foot Sue and the Witch in the Woods she’s got Pecos Bill’s rattlesnake (called Rat here instead of Shake, so possibly a second snake) and uses that to stop her bouncing in a forest in Russia, catching its fangs onto a tree. Asking for directions she encounters a man in white riding by her, then a woman flying around in a pot: Baba Yaga! The witch isn’t keen on helping her but is bored, so they have a contest: if Slue-Foot Sue wins twice of three, Baba Yaga would take her home but otherwise Sue would give up all she had. First they see who can become smaller, which the witch wins by drinking a magic potion. Then they see who has the sharpest blade but Sue wins easily, the original Bowie knife she carries being so sharp it’s able to cleave Baba Yaga’s very shadow. Finally the old crone turns her staff into a snake only for Rat (the, or one of the, rattlesnake whips of Pecos Bill!) bites it dead. Even though Slue-Foot Sue won fair and square, Baba Yaga tells her it’s too late to show her the way out to Texas. As she goes to take a nap in the barn before dinner, another rider passes her by (this one in black) and then a hedgehog—claiming to be Dmitri Romanov—warns her that the witch means to kill her, but also that with an incantation she can make the chicken hut take her back home. Sure enough when Baba Yaga leaves at midnight it works, Slue-Foot Sue drops the hedgehog off in Kiev, then uses it to cross the Atlantic Ocean (creating the Norwegian fjords as they go, and lassoing a whale to drag them after that) where upon reaching Hell’s Gate Gulch Ranch (an incredible name) its legs are cut off and cooked up for Pecos Bill by their camp cook buddy Bean Hole.

Design Notes: Slue-Foot Sue is a part of Pecos Bill’s tall tales, a rough and tough rumbler ready to take on the wilds of nature, so she’s got core strengths similar to him though she’s not as potent or as tough—a little bit of the sidekick treatment, if you will. Plus we have a little guidance: “she was as strong as a moose, wild as a wolf, and brave as a bear.” Interestingly right after meeting him she sprays a stream of water a great distance that just misses his head, so she’s also got her own quirks too. Let’s do the numbers! The DMG rang in at 14.25, the Blog of Holding at 15.166, giving Slue-Foot Sue a healthy Challenge Rating of 14.

Frontier Focus. Slue-Foot Sue can use a bonus action to gain advantage on her next ability check.

Gliding Skirt. When Slue-Foot Sue falls her descent slows to 60 feet per round. In addition, she can move horizontally 1 foot for every 1 foot she descends, effectively gliding through the air until she lands.

Legendary Resistance (1/Day). If Slue-Foot Sue fails a saving throw, she can choose to succeed instead.

Water Spit. As long as she is in or within reach of at least a swig of water, Slue-Foot Sue can use a bonus action to draw and spit it at a creature or object she can see within 150 feet. The target must make a DC 19 Strength saving throw. On a failure, it is either pushed 10 feet away from Slue-Foot Sue or knocked prone (her choice).