In 2017, Eric Bloat launched his first kickstarter Dark Places & Demogorgons (review) via his company Bloat Games. He expanded on his Survive This!! ruleset from Survive This!! Zombies to introduce an 80s town overrun by monsters. He also releases RPGs and supplements on DriveThruRPG.com. 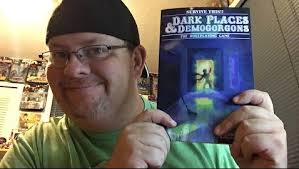 Eric fulfilled three kickstarters in 2018 and has three so far through April 2019. He started writing games because of his love of RPGs and he uses kickstarter to bring better value to backers like hardcovers, better paper, and boxed sets. He always wanted a red box RPG similar to D&D and he achieved that with Vigilante City. He plans on three more kickstarters this year, with one covering books 3 and 4 for Vigilante City and two as yet unannounced. His latest kickstarter is for the Blackest of Deaths, a new deadly ruleset of fantasy dungeon crawling and mayhem.

Eric also worked with Wet Ink Games to support their recent kickstarters as well as creating new games that have more of an indie feel. Eric supports all this additional work by bringing on more freelancers to produce more content and bigger books. He also keeps ten to twelve different projects he is working on open at a time and when he slows down on one he switches to the next until he circles back around. Eric wants to make his RPGs available to everyone who wants to play them, offering lower priced PDFs and working with those on extremely tight budgets to get them his RPGs.

Survive This!! is a ruleset that blends OSR rules with some D&D 5E concepts like advantage. It is not a retroclone, however, of any previous RPGs. Eric felt that D&D 5E brought back how RPGs were played in the beginning with interesting worlds to explore and play in and he wanted to use a similar approach. He started with zombies to offer something other than another fantasy RPG.

Releases for Survive This!! include Zombies! 2nd Edition, Dark Places & Demogorgons, and Vigilante City. All three RPGs use the same base rules and can be used together. Monsters like Bigfoot or the Loch Ness monster from the DP&D Cryptid Manual can stalk the parks and lakes of a city of supervillains built with the rules from the VC Villain's Guide. Eric introduced new concepts into Survive This!! games like simplified XP based on what the characters accomplish rather than killing monsters and gaining loot. The attribute of survival can be spent to allow rerolls and stave off death. Players familiar with D&D can start playing a Survive This!! RPG and understand the rules in minutes.

For Vigilante City, Eric kept the leveling improvement of the OSR to allow PCs to grow from some guy in a mask brawling on a street into an actual hero. This arc is similar to Batman: Year One and Netflix’s Daredevil. PCs in Vigilante City always stay street level in power but have to grow into heroes. They haven’t figured out crimefighting yet when they get started. They grow into it.

Eric said the best place to follow Bloat Games is on Facebook. He is also on various other media like Instagram and MeWe. He looks forward to third party support that is coming for Survive This!! and the Blackest of Deaths RPGs. He really appreciates the backers of his kickstarters and especially those that sign up over and over. And if you want one of his RPGs but truly can’t afford it, email him and discuss options with him.

This article was contributed by Charles Dunwoody as part of EN World's Columnist (ENWC) program. Please note that Charles is a participant in the OneBookShelf Affiliate Program, an affiliate advertising program designed to provide a means for sites to earn advertising fees by advertising and linking to DriveThruRPG. We are always on the lookout for freelance columnists! If you have a pitch, please contact us!
Last edited: Aug 26, 2019

C
Charles Dunwoody
Charles Dunwoody is not a robot and is willing to type tilted letters and numbers to prove it. He started playing and running RPGs with Advanced Dungeons & Dragons (before it was first edition) and is currently ten sessions in GMing Forbidden Lands. He wrote a few articles for Dragon Magazine when it was in print, wrote a bit more for Mongoose’s electronic Signs & Portents, and was paid for a supplement for Bulldogs! (d20 version) that was sadly never published. Currently, he freelance writes including articles for EN World. He also camps year round, backpacks, and canoes when not reading and writing. Charles is a participant in the OneBookShelf Affiliate Program, an affiliate advertising program designed to provide a means for sites to earn advertising fees by advertising and linking to DriveThruRPG.

I had some great dealings with Eric during the VC Kickstarter. He released the beta and I gave him a lot of feedback on the book. I found him to be a very nice, kind man who has a passion for the hobby and a great talent for making some really great games. The VC books are incredible, with tables that go on for pages filled with imagination. If he's doing another VC Kickstarter this year I'm automatically in. Check his stuff out, it's great.
B

Great article. As someone who first discovered Bloat Games with Eric’s kickstarter of Survive This!! Zombies 2nd edition, I’ve since purchased every game and backed the future games from BG. More importantly, Eric and the rest of the crew at BG, are great people. From customer support to interactions on social media (FB, YouTube), they’ve been nothing but first rate.
C

Bluddwolf said:
Great article. As someone who first discovered Bloat Games with Eric’s kickstarter of Survive This!! Zombies 2nd edition, I’ve since purchased every game and backed the future games from BG. More importantly, Eric and the rest of the crew at BG, are great people. From customer support to interactions on social media (FB, YouTube), they’ve been nothing but first rate.
Click to expand...