Kickstarter Evergarde: Wondrous Magic, Rampaging Horrors, and a World Teetering on the Edge 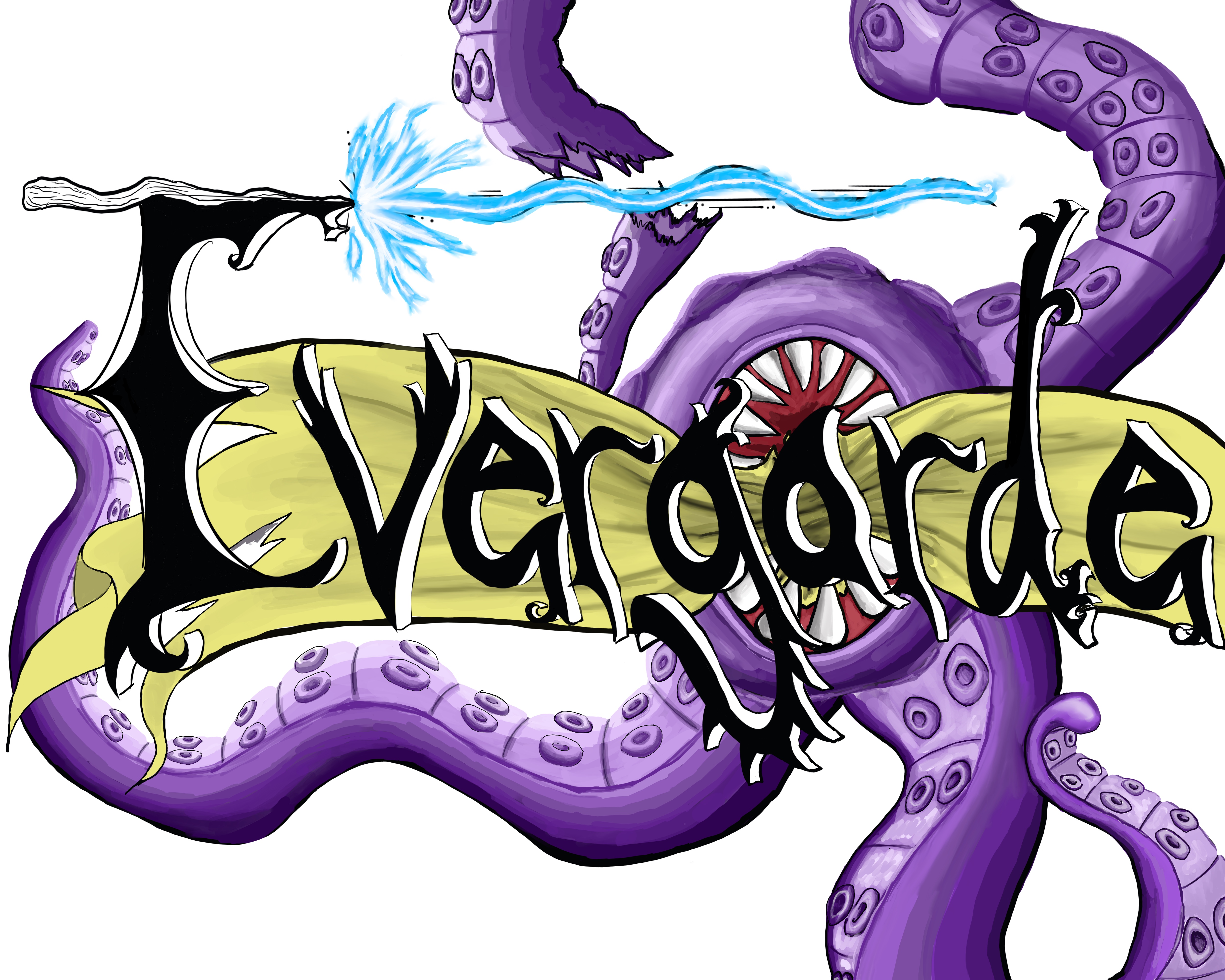 Imagine a Hogwarts analogue, wherein wizards learn their craft at a school of magic. Where that magic is ubiquitous and commonplace – brooms sweeping floors, flying carpet taxis, that sort of thing. And above all, where magic is truly wondrous, with impossible citadels and floating cities and the like.

Such a society could do great things. Great, but also terrible.

We are creating a professionally printed, 5.5” x 8.5” saddle-stitched RPG supplement targeted to 5E, but that also supports older editions and the OSR. In Evergarde, you don't just encounter Orcs or Owlbears. The Badlands corrupt all life, slowly mutating the recognizable into the repulsive. Those Orcs may shed skin like snakes; or take to the air, aided by enormous scaled wings; or climb easily, thanks to webbed hands and feet. Or perhaps all three.

The book ships with the following:
For more information, check out the Kickstarter. Thanks for looking!

The mutation system might be my favorite part of Evergarde. It is quick to use, pairs seamlessly with any bestiary, and generates some truly incredible results that are sure to make for memorable encounters.

And it is also great fun to terrorize your players with!

Mutations are earned (gathered? collected?) on a escalating scale from minor to major, eventually resulting in complete corruption and the creation of a Blighter, an abomination of the Badlands that knows only hunger. And since mutations affect the body and the mind, the result is a creature with different abilities and mannerisms that changes how they might otherwise react in an encounter.

Consider:
These were all randomly created by rolling on the Mutation tables. And they suggest a narrative to the encounter. Perhaps the Ogre hides in a marsh and is scarcely recognizable as an Ogre at all; it has turned inward, focusing its diminishing intellect on the small worm it dotes upon. The Ogre cares not about the characters, unless they mess with the worm.

Or: The Goblin tribe is greatly diminished as many have heeded the whispers, to a predictably poor result. They lurk in the depths of a hovel suddenly too large for the tribe's scant remnants. They are insular and withdrawn, mumbling to themselves, eating cockroaches when they remember to eat at all, trying to resist the call to fly.

Or: The Prospector might welcome the presence of the party, bartering with them and offering them welcome succor and shelter in the Badlands. Or he might believe they are more spirits, come to harass him (piss off, ghost!). Or perhaps he bids the party to aid him in exorcising these lost souls. Or maybe he runs from the party, disgusted by his own appearance.

All these ideas were off the top of the dome. Probably you can come up with something better. The point is, the mutations suggest something distinct, perhaps even a little quirky.

Mutations apply to any and all life in the Badlands: wandering tribes of near-humans, lost Iron Shield patrols, packs of wolves. You can even use them to twist the landscape itself, producing some truly horrific creations, like trees that shed skin. All of which supports the idea that the Badlands are a messed up place.

You'll notice, I did say all life. That includes the characters.

The Mutation check is handled by a Constitution Saving Throw, made when the character exits the Badlands. The check is more difficult the longer the character spends in the wasteland.

Mutations come in several varieties, and progressively worsen:
Once earned, a mutation can't be undone. No known magic can undue the Badlands or its dark imprint.

Since the characters will spend much of their time in the Badlands, they will pick up several minor mutations before progressing on the scale. Evergarde will include guidelines for ramping up the corruption process or slowing it down, based on your group's preference.

For more information, check out the Kickstarter. Thanks for looking!
Last edited: Mar 3, 2020

About the adventure included with the book...


The Leviathan Beneath the Black Dunes​
The Leviathan, a fabled treasure ship of old, was discovered partially buried in the landlocked Black Dunes. An expedition was mounted to salvage the Leviathan's wealth.

None returned. Any who followed in the expedition's footsteps likewise vanished.

There are rumors of a nameless horror that stirs under the black sand. Of an undead crew that toils under moonless skies to raise the ship from its sandy grave. Of a band of wild Duskers who massacre any who step onto the dunes.

All the treasure of the old world awaits those with the courage to discover the truth of the Leviathan beneath the Black Dunes.


*​
We are working with the talented Fentiman's Adventure Cartography on a dungeon map for the adventure!
I've include a collage of some of Fentiman's work below.

For more information, check out the Kickstarter. Thanks for looking! 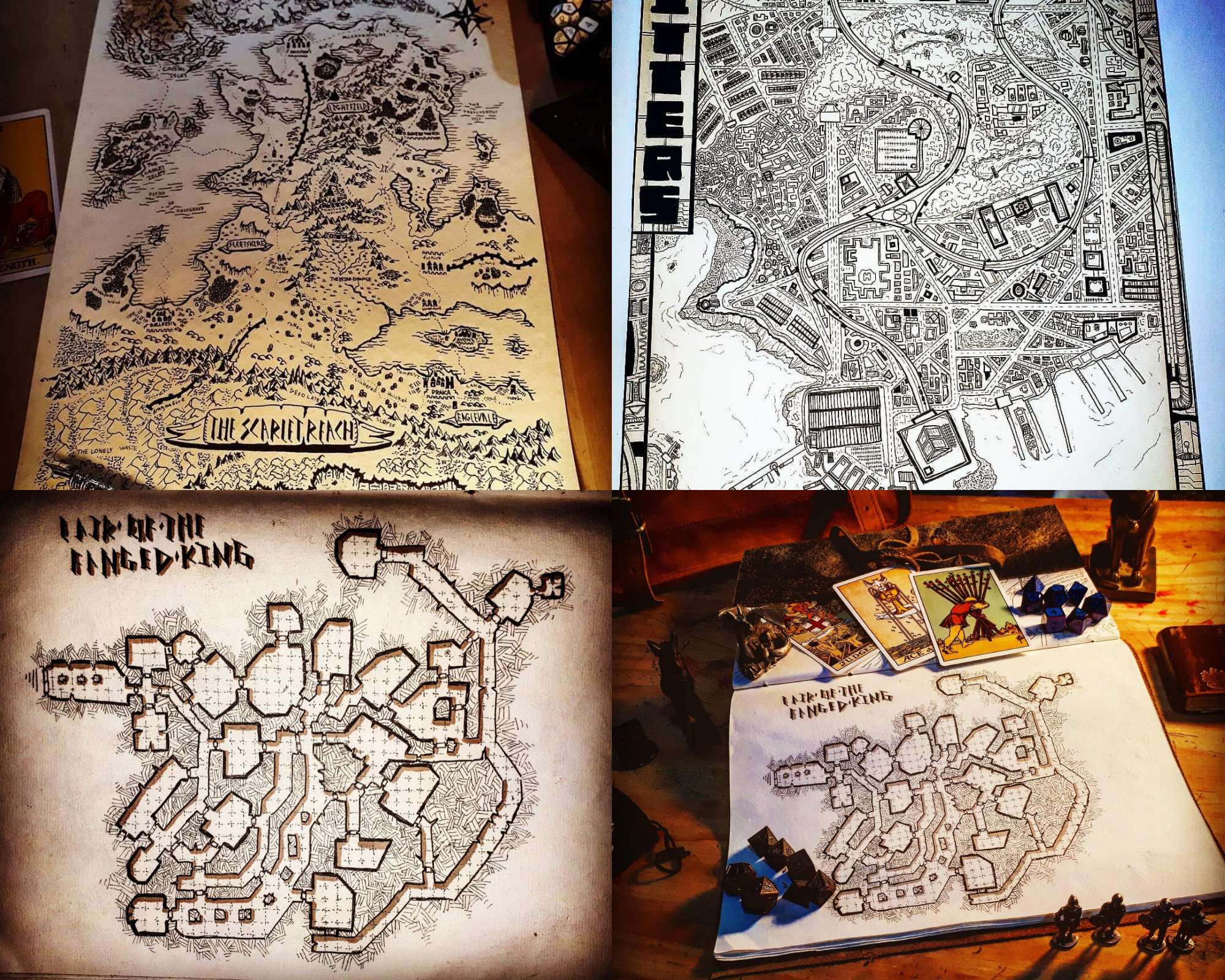 We are releasing an 8.5" x 11" map of the world (or at least, the parts Evergarde is concerned with). The map will be printed in color on glossy poster paper. And every backer of the physical book will get it for free!

We don't want to leave our PDF friends out in the cold, so they'll get a digital copy of the map included with their files.

The map is still being polished, but is far along enough to share. 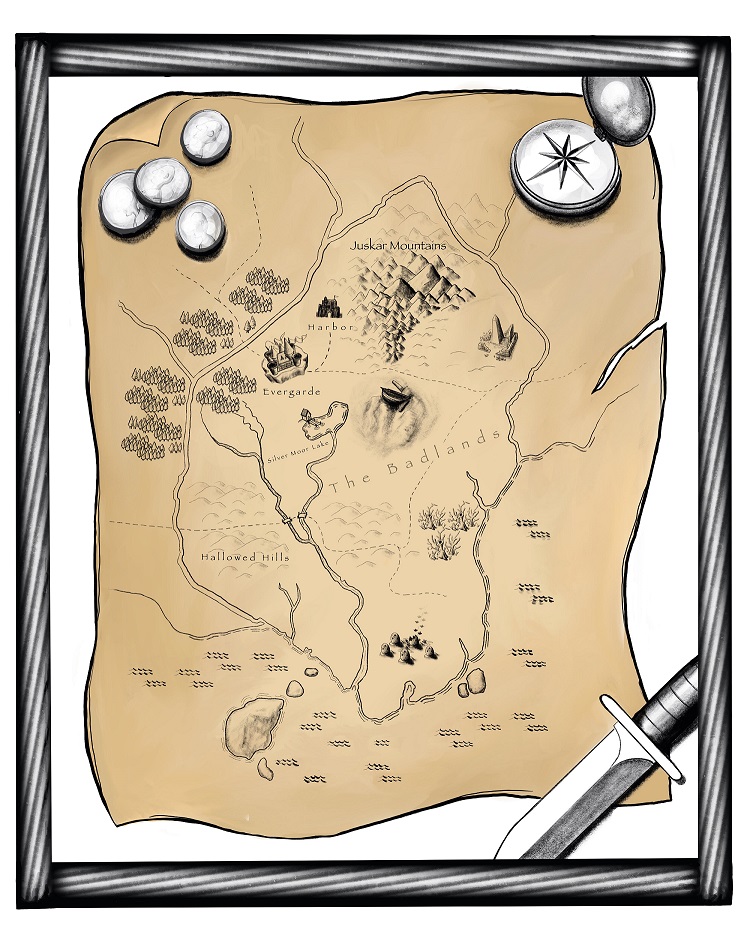 The mutation system is my favorite element of Evergarde, but Factions come a close second.

Factions are narrative elements that provide benefits for the player while grounding them in the fiction of the world and reinforcing Evergarde's themes (such as restrictions on magic). They also suggest adventure possibilities for the DM, and illuminate what sort of game the players are most interested in.

For instance: several players joining the Iron Shield might suggest a militaristic campaign involving a desperate war of attrition against mutated horrors. The Shadow League, conversely, is all about hiding in plain sight and working to undermine Evergarde's social constructs. In fact, it can be great fun to run an entire campaign with the characters all belonging to the same Faction. Hogwarts roleplaying, hello!

Most groups aren't nearly so agreeable on such things, so Evergarde's default mode (if it can be said to have such a thing) is a party belonging to several different Factions, often with ideals that run counter to each other, and yet must work together. You can use Faction alignments to foster a game of paranoia and double-crossing if that's your thing, but we prefer ones where the characters mostly get along. To that end, parties are brought together precisely because their disparate skill sets make for a well-rounded group. Delving the Badlands unites them in purpose, if not intent. And, too, Factions can sometimes give characters an extra task to complete while out questing.

Most Factions have requirements that must be met, and they all grant unique advantages and disadvantages. Here's the House of the Half-Moon, which is part of Evergarde, School of the Arcane (layout not final): 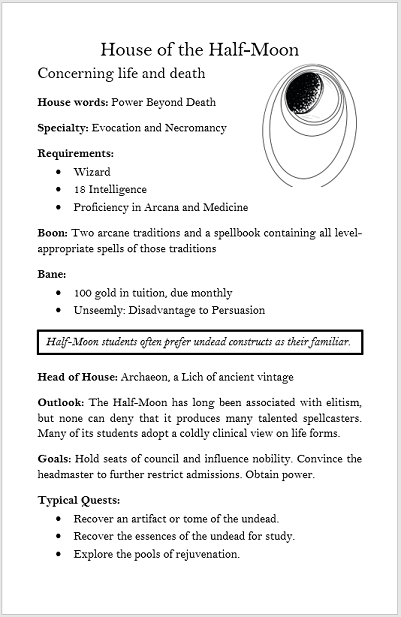 The longer a character belongs to a Faction, the more influence they can exert, and they can even call upon the Faction for resources. But the hand that gives can as easily take away: Faction membership may not necessarily be permanent. Such situations should arise out of roleplaying or as a conscious choice on the part of the player.

There's a lot more that could be said about Factions (and is in the final copy!), but for now I wanted to give you a taste for what they are and how they work. Happy to answer any questions you have!

We have gotten a little aggressive with our stretch goals, largely because we are Evergarde's first players and want to see it become even better! So we've combined several of the stretch goals and brought them all into reach, depending on how today goes.

Do you dig the look of Evergarde's art? We have a reward that includes the physical book and a customized drawing of your character for only $35!

Updated Targets
$1200 - More Tables and More Art! We will include a table for determining bizarre Badlands terrain and encounters, such as a corrosive, viscous pond of bubbling black fluid that guards a partially submerged stone chest; or a group of Duergar with prehensile tails that are cutting down the remnants of an ironwood forest to build an enormous wheeled house.

At this level, we will also include a table to help DM's come up with interesting ways of describing a High Magic world to help inject verisimilitude into play.

We will also include art showing various mutations, as well as the gradual progression of a creature as it mutates into a Blighter.

$1500 - Character Advancement and Even More Art! We will include setting-specific advancement options, such as magical careers for graduates of Evergarde. This progression will be Faction-based, and is something that can be tracked, with possibilities for advancement or setbacks based on play. Each milestone will unlock additional perks and abilities.

At this level, we will also include Faction specific event tables, which the DM can use to determine (or adjust) the Faction's objectives, side quests, and world details. These tables can even be used to run a Faction-specific campaign, where all characters belong to the same Faction.

If that's not enough, we will include new art of named locations, such as Bellcross, where all buildings have been bewitched to remain ahead of the shrinking border, sprouting legs or wings or enormous wheels, and moving down the road like a ridiculous caravan.

We will also include art depicting some of the factions in action!

$1750 - Downtime Activities! Want to know what's happening on the border? Or what the Shadow League has been up to? Or maybe you want to immerse your wizard in the day-to-day life of a student of higher (magical) learning.

At this level, we will include tables and a system for simulating a month, season, or a whole year. The system will generate events that advance the world. Perhaps the Iron Shield has suffered a setback in a disastrous raid into the Badlands. Maybe the Acolytes of the Eternal Flame have swelled in number and are threatening to annex part of the country. These are possible adventure prompts if you are a member of the Faction, and interesting background details if not.

The system can also be used more intimately. Maybe you just failed your potions exam and now are in danger of being expelled. Or you discovered a rich new cache in the Badlands, increasing your influence in the Guild. Events can tie directly into the Faction Advancement stretch goal.

And, naturally, these activities could generate adventure prompts on their own!