D&D 5E Everything We Know About The Ravenloft Book

Here is a list of everything we know so far about the upcoming Van Richten's Guide to Ravenloft. 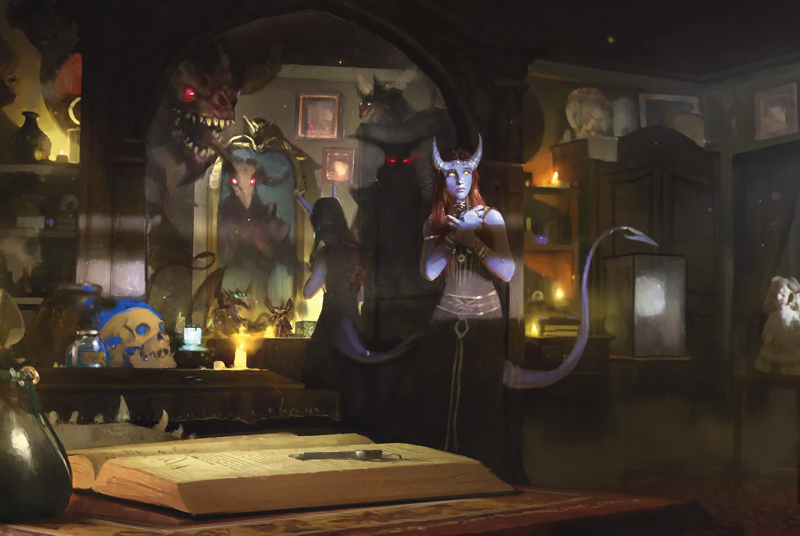 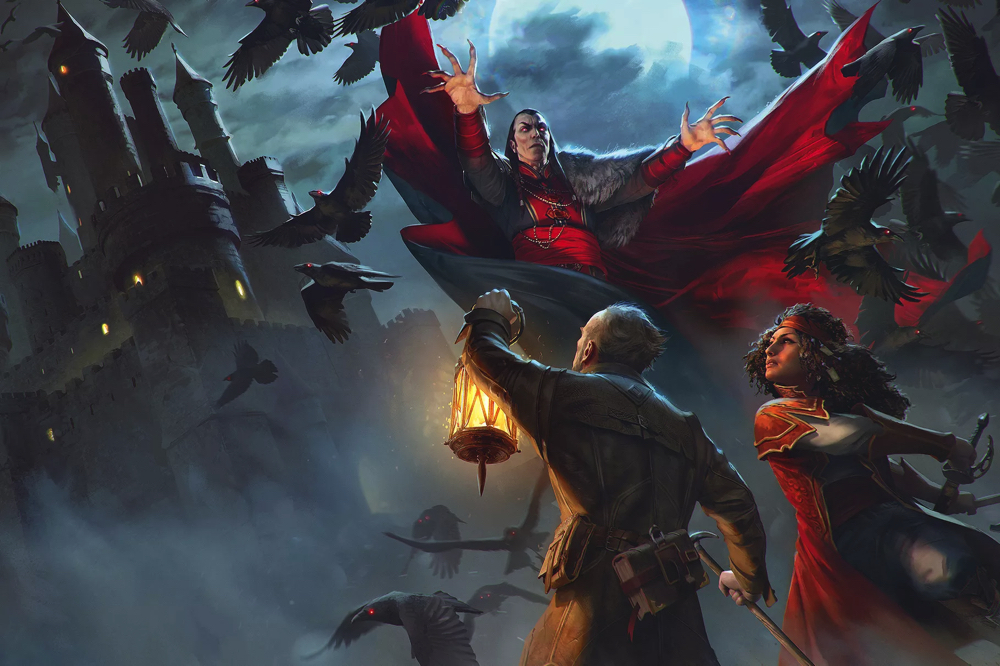 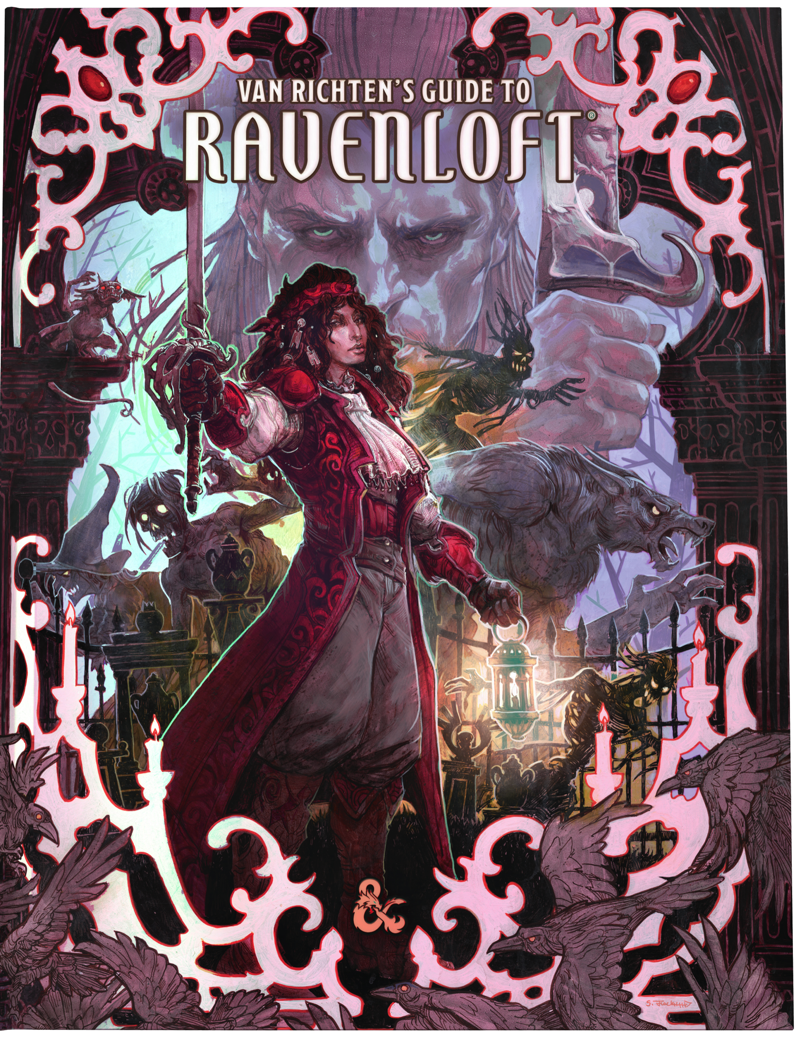 As usual, there is an alternate hobby-store exclusive cover for the upcoming Ravenloft book. Here's a look at it! And here's the full wraparound art. https://www.enworld.org/threads/updated-with-cover-the-d-d-book-is-van-richtens-guide-to-ravenloft.678411/... 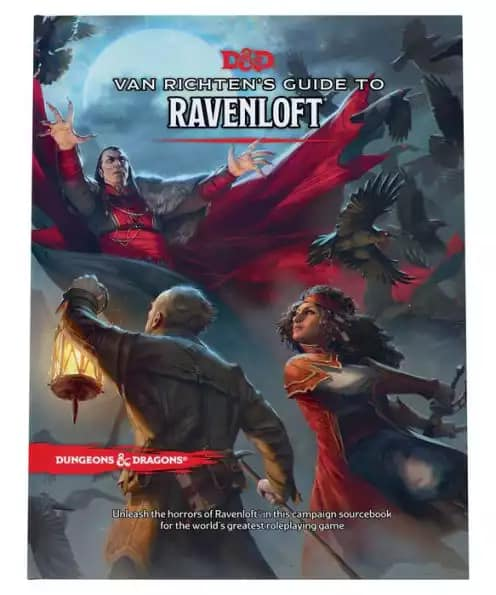 Yesterday's hints that a new D&D book would be announced today have born fruit -- we now have a product description and a title! It's a Ravenloft setting book, with tools and new rules for horror-themed games, and new horror-themed character options. I'll update this post with a product image as...

At least the Dungeons & Feelings folks try to push something like a story. It’s already tedious enough to try watching most actual play streams, I couldn’t imagine trying to sit through four hours of a combat-heavy stream. I’d rather gouge my eyes out.

At least in my experience, though I used to think my groups were weird until I started seeing these actual plays that reflected my usual experience. Once in college, a friend joined our regular group one time, and stated that he felt "like a Tolkien character who stumbled into a Joseph Conrad novel..."

Parmandur said:
I mean, isn't that how a lot of actual play goes...?

At least in my experience, though I used to think my groups were weird until I started seeing these actual plays that reflected my usual experience. Once in college, a friend joined our regular group one time, and stated that he felt "like a Tolkien character who stumbled into a Joseph Conrad novel..."

Depends entirely on the group. My experience is most actual play is little more than the players moving their game piece around a map during combat. There might be some dialog with shopkeepers and various NPCs, but feelings are something largely ignored.

Bedrockgames said:
If this is done in the classic, it is a bad thing, and you lose control and wake up with no memory of the killings you have committed, I welcome it. If we are about to see lycanthropes as a viable PC race, that is getting into WW territory
Click to expand...

That would be a welcome change. Too much thematic on the bone to leave to an indie company.

Parmandur said:
I mean, isn't that how a lot of actual play goes...?
Click to expand...

The long ones, yes. If you listen to hour-long ones, not so much. They've got plot to get through. (e.g. The Adventure Zone, Not Another D&D Podcast, Dimension 20, Nerd Poker, etc.)

Some point after the hour and a half mark is when there's time for feelings.

overgeeked said:
At least the Dungeons & Feelings folks try to push something like a story. It’s already tedious enough to try watching most actual play streams, I couldn’t imagine trying to sit through four hours of a combat-heavy stream. I’d rather gouge my eyes out.
Click to expand...

I honestly think four hours is too long for my tastes, no matter the content. I strongly prefer one hour sessions. Lots of stuff happens. On an hour-by-hour basis, I don't think there's any less combat than the four hour shows have -- the rest of it is filled up with plot, rather than (to use an example from the most recent Critical Role podcast) 15 minutes of the player characters telling each other what they'd like them to do in the event that the first character dies in what appears to be one of the big final fights of the campaign.

Obviously, Critical Role's success says that works for a lot of people, but it's a lot of feelings for me.

overgeeked said:
Depends entirely on the group. My experience is most actual play is little more than the players moving their game piece around a map during combat. There might be some dialog with shopkeepers and various NPCs, but feelings are something largely ignored.
Click to expand...

Blargh. We might need to compare actual play lists. I don't think I'd want to listen to the ones you are.

I found the inherent flaw in the system was a lot of redundant dialogue vs. Dialogue that moves the scene along. This is obviously because they are improv-ing and don't have a omnipotent writer fixing the dialogue, but there were parts where I said to myself "you've already said that, move along".

If it's not obvious, I don't do streaming D&D much, so my ability to critique is limited. But as someone who has listened to a few audiodramas before, I found myself longing for the economy of words...

* What fan-art dark-lords from the fraternity of the shadow should become canon?

* If the setting becomes very popular now, and fandom adds a lot of homebred ideas, then the "sandbox" becomes too small, even if some "predators" also hunt as food other supernatural creatures. And teorically one of the main ideas is the most of citizens don't notice the menace of the monsters, at least not the enough, as if the potential demographic crisis wouldn't be enough. Have you thought about the psycological impact in a society with a relatively high death rate? If you have lost a member or more of your family then you don't feel too much to be a "bohemian" but your spiritual inquisitiveness is high.

* If there is a Ravenloft spin-off I don't advice the Gothic Earth again, not now, because you never can know when a new controversy about Victorian age could start. What if the players discover the "secret weapon" to defeat the undead lord is "the Rose of Guadalupe" or the sacred waters from the source in a Catholic nun convent? Or the infernal outsider kills the female anglican exorcist for a failed ritual because "her faith was not enough to stop him"

LuisCarlos17f said:
* What fan-art dark-lords from the fraternity of the shadow should become canon?
Click to expand...

Hello, a new Dragon Talk dropped today... and it includes a new "Lore You Should Know," this time entirely on the Demiplane of Dread "Dementlieu."

Some important changes to the plane have been made;

I mean, new Dementlieu sounds interesting, in and of itself, with well-thought-out theming. Seems like a nice addition to Ravenloft's landscape. I also like that they're retaining the "false history" concept.

But presumably the point of reviving an old setting is to use the old stuff, which they don't appear to be here, except for a few names and it being French-themed. (In fact, it sounds like they didn't think much of classic Dementlieu.)

They do describe this Dementlieu as "evolved", so maybe we'll get some backstory explaining how classic Dementlieu became new Dementlieu. Overall, though, at this point it sounds a lot more like 5E Ravenloft is a reboot.

JEB said:
I always assumed it was pronounced "day-mon-loo", not "dem-ent-lee-oo". (Google Translate says it should be pronounced "duh-mon-lee-oo". And that it means "godless".)
Click to expand...

Seems a bit odd to associate a "city zone" with fairy tales. I usually see fairy tales as being rural stories.

I guess that means we are focussing on French fairy tales (Cinderella, Beauty and the Beast) rather than German (Hansel and Gretel) or English (Jack and the Beanstalk).
Last edited: Thursday at 9:39 AM

Islayre d'Argolh said:
But it's basically "bad french" a native speaker will never call a city "Dementlieu"
Click to expand...

You mean zee sexy one, of course ^^

I think Ravenloft is going to become one of the alpha or main settings of the 5th Ed. I miss the core (but its geography was too "boring" or simple, to square/rectagular to be an alleged tectonic plate) as place of confrontation between different supernatural factions (vampire clans, werebeasts tribes, fae courts, ghost brotherhoods/guilds, wizards societies..). Have you seen the list of things published in the DM Guild? Or the net-fandom from Fraternity of Shadows web. There are also gothic-horror/dark fantasy settings by 3PPs as Obsidian Apocalypse by LPJ, Kaidan by Rite Publishing and Shadow over Varthak by Fat Gobling. They are a lot of potential market of players who want horror adventures, because it is like to be within a movie.

* I wonder about Dark Powers abducting Vecna's mother when she was just going to die as a hook against the god.

* If there is a reboot, what about the novels and official modules? The hidden secrets when the events about grand conjuction were published. Maybe now WotC is worldbuilding all the planet from the original Barovia in the material plane, maybe even the rest of the crystal sphere.

So it appears the theme of Dementieu is "illusion". The Duchess isn't really nobility, she is a poor girl masquerading as wealth. Everyone tells others that they are just "embarrassed millionaires" and not destitute, acting out as if they were rich. The domain beyond the city is a lie; people tell stories of towns and villas lost in the Mists. And anyone attempting to break the illusion meets a swift end.

I can see a lot of the old Dementieu there: the social status, the emphasis on spectacle, the society based on lies. The Darklord who demands others bow to their will. The big difference is that their is much less mind-control (esp with icky consent baggage) and the domain is focused on a much smaller area (both geographically and thematically).

What I'm disliking though is the lack of neutral space; areas where life isn't a fun house for evil. The western coast had a number of small domains that created a buffer for the larger horror areas. Places PCs could come from. I'm hoping some of that still exists.

This is a fairly significant lore change from 2nd edition Ravenloft by making the domains more fully part of the Shadowfell rather than their own demiplane.

The Vistani have the power—some say gift—to travel through the mists that lead to forlorn realms within the Shadowfell known as the Domains of Dread, where creatures born in darkness dwell.
Click to expand...

-Book of the Raven

This is a fairly significant lore change from 2nd edition Ravenloft by making the domains more fully part of the Shadowfell rather than their own demiplane.

Debatable, but even if it didn't, the Shadowfell is still too otherworldly to be the neutral that say, Mordent or Invidia is. I'm hoping they keep some of the quieter domains to balance the fun house ones. Maybe Darkon due to it's size will work...