Face a Dire Threat in Mutant: Year Zero and Stop the Gray Death

The Gray Death is a 96 page full color hardcover adventure for Mutant: Year Zero. I was provided a print copy to review. Spoilers about the adventure follow. 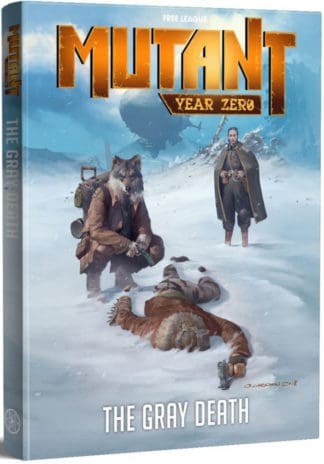 Mutated humans, enhanced humanoid animals, human survivors, and robots band together to fight an army bound by hate and possessing a deadly bioweapon. Six chapters provide a sweeping adventure with a sandbox approach that is common to MY0. The first chapter provides an overview of the unfolding events and ways to kick off the campaign. The next five chapters are Special Zone Sectors per the MY0 rules. The first three can be played in any order while the last two should come last and in order.

Elysium was a human conclave of high tech (including biomechatronics and zenogenetics) that recently fell. Two of the leaders from Elysium were out in the Zone when their home was lost. They decided to make a new home for themselves in the Zone which is bad news for the mutants and their allies living there. The PCs’ first run in will be with the Army of the Dawn, fanatics controlled by biomechatronics who plan to take over the Zone via airships once a zenogenetic plague brings the mutants low. The PCs are hired to investigate further and the adventure kicks off in earnest.

In addition to the Special Zones, a GM is also provided with random events for both the Zone and the Ark. As the PCs travel from one Special Zone to the next these events will provide additional challenges and fill in details about what the PCs are facing. 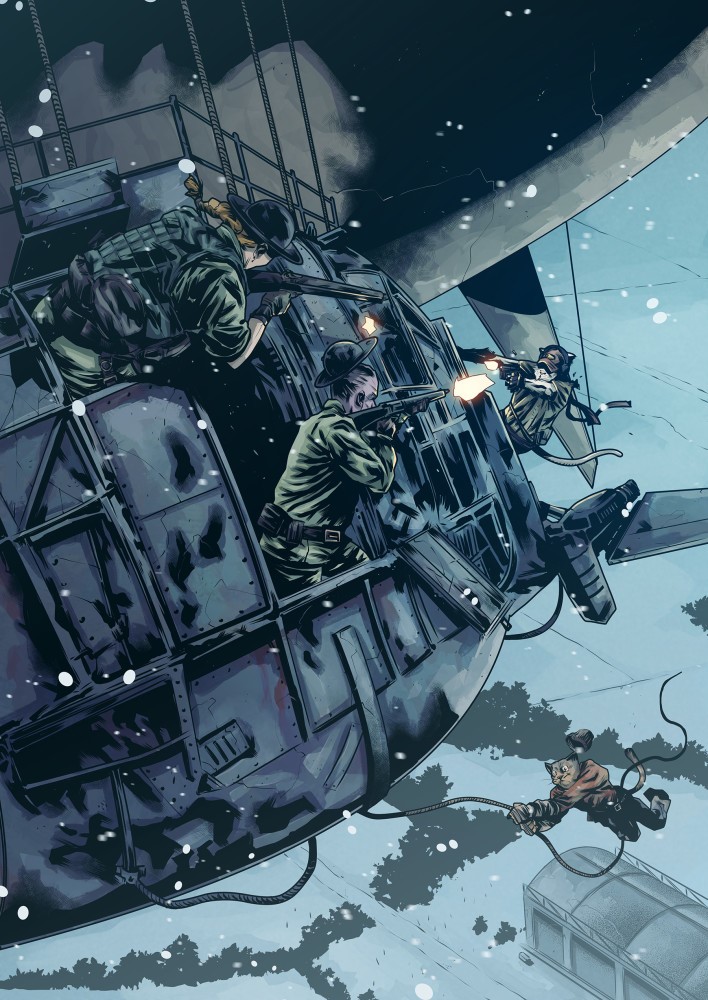 ​
One Special Zone describes a showboat that puts on performances mocking mutants, uplifted animals, and robots. The next is a trading post dealing in slaves that is willing to work with the Army of the Dawn. The Garrison is the HQ for the Army and a base for its airships. Each of these locations include well detailed maps, fully fleshed out NPCs many with portraits, handouts for PCs, and events that can unfold in that Zone. The airships in particular are a real threat as most Arks do not have air power beyond a few flying mutants.

The last two chapters describe Dawnville, where the plague is going to be released, and Biobunker VII where it was developed. Both locations have the same level of details as the other Zones. If the airships didn’t spell disaster on their own than the plague certainly does. It will leave the mutant population decimated and hard put to defend against the airborne Army of the Dawn.

Some of the things I particularly like include the full page art of the encounter that kicks off the campaign. An outgunned dog scout being attacked by Dawnsoldiers and only the PCs can save her. I like the inclusion of the killer tree as a third party in events and the ringer the tree provides during the wrestling matches. Actually, each new NPC described, location visited, and events described paint a vivid picture of life at the end of days and what might actually follow next. The tech and rebuilding an Ark can do is really highlighted here, hinting at an interesting possible new future for the mutants if the PCs can stop the Army of the Dawn. In addition, humans from the Old World arriving in the Zone with all their tech and moral superiority bring great change to the mutants’ world.

This book is filled with useful bits for GMs running Mutant: Year 0. If you are interested in running that RPG with a more defined campaign than Gray Death can be run as written. Or many bits and pieces can be pulled out by a GM running her own campaign. There are NPCs, new tech, detailed maps, events, new Zones, and more to use. If you like MY0 then this book is for you. This adventure really is a fascinating look at where a MY0 campaign can go after the Ark is developed to a high degree and humans return to the Zone. If you haven’t tried MY0 then this book is a great next step after getting the main rules.
Click to expand...