The world is going to end. Not over time but all at once. Soon. As an Agent you know this awful truth. If you would fight back anyway you may want to pick up Delta Green Agent’s Handbook. 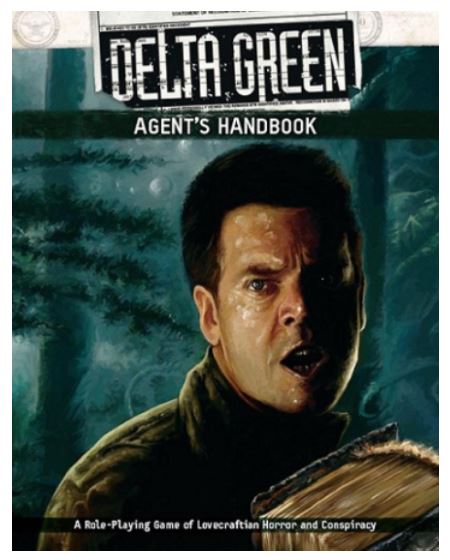 Sometimes you find a rules set that resonates with you. It conjures images and evokes ideas of scenarios you could run. Delta Green is one of those RPGs. A near future world springs to shambling unlife, a setting of eldritch horrors and mind-bending madness. Of a doomed fight against entities that are one day going to win and wipe mankind out completely.

The layout of the book sets the tone of the game world through written accounts of agents inflicting violence and enduring bouts of madness as they wrestle with otherworldly creatures and humans wielding dark magical power. Juxtaposed against the rules, the dark gritty tone of the game world is never more than a couple of pages away as if reminding you that you can’t escape.

The rules are d100 roll under. The dice represent an uncaring universe while the Agent’s (PC’s) desire to succeed displays their courage and hope. Crits and fumbles are handled through doubles so if your Firearms is at 40% a roll of 1, 11, 22, or 33 is a crit. Lethal weapons like a submachine gun have a flat percentage chance of killing a person outright with damage being done otherwise. Sanity can be lost through suffering violence, inflicting violence, being helpless, and exposure to the unnatural. Agents have to balance not just Sanity but also Bonds which tether the agent to the normal world but which suffer serious strain from the job of being a Delta Green agent.

Character creation is five steps with options for random rolls or a pool of points to spend and skill packages to speed up the process. Statistics are determined, attributes are derived, profession and skills are chosen, bonds are defined, and final details are filled in. Gear is determined before the first mission with lists of expected gear each profession should have and rules for determining if unusual equipment is on hand. Eight pages of gear cover generic items like medium pistol with a short list of example models.

A large section discusses Federal agencies with detailed information on training, knowledge, skill packages, and even a sidebar on post-traumatic stress disorder. This information grounds the PC in the real world and provides the detail needed to understand how an Agent might think and act based on training and experience. The mind wrenching creatures and weird magic are safely hidden in the Handler’s Guide.

Appendices cover tradecraft for a spy with two pages of skill tasks for things like tampering with evidence and disposing of a body. There is a large glossary of in world terms, recommended media that covers a wide range of non-fiction books on Federal agencies and their (mis)adventures. Everything is rounded out with an index.

The Agent’s Handbook grounds the PC firmly in the real world of war fighters and spies while hinting at the terrors and horrors that go beyond combat, fear, and betrayal. A player will be well equipped for a life of spying while in almost no way ready to face otherworldly creatures and supernatural horror. And yet the PCs will be on edge, wondering at the dark hints they’ve seen about the unnatural. Which means the Agent’s Handbook does its job brilliantly.

This article was contributed by Charles Dunwoody as part of EN World's Columnist (ENWC) program. Please note that Charles is a participant in the OneBookShelf Affiliate Program, an affiliate advertising program designed to provide a means for sites to earn advertising fees by advertising and linking to DriveThruRPG. If you enjoy the daily news and articles from EN World, please consider contributing to our Patreon!

Charles Dunwoody started playing and running RPGs with Advanced Dungeons & Dragons (before it was first edition) and is currently GMing Coriolis the Third Horizon. Currently, he freelance writes including articles for EN World and Geek Native as well as his first PDF adventure for Call of Cthulhu: Michigan Mythos: Fall Colors. He wrote a few articles for Dragon Magazine when it was in print, wrote a bit more for Mongoose’s electronic Signs & Portents, and was paid for a supplement for Bulldogs! (d20 version) that was sadly never published. Charlie is a participant in the Noble Knight Affiliate Program and the OneBookShelf Affiliate Program, both of which are affiliate advertising programs designed to provide a means for sites to earn advertising fees by advertising and linking to Noble Knight Games and DriveThruRPG respectively.
T

This is my favourite set of Cthulhu horror rules - very straightforward and concisely written, but with an element of thought in every element that develops a real gritty feel as a whole. The general writing is also top notch, and its very well supported with a good variety of scenarios available already.

TrippyHippy said:
This is my favourite set of Cthulhu horror rules - very straightforward and concisely written, but with an element of thought in every element that develops a real gritty feel as a whole. The general writing is also top notch, and its very well supported with a good variety of scenarios available already.
Click to expand...


I agree. The loss of sanity seemed high in the games I've run, but maybe that is an intentional part of the game. Agents were really mentally scarred after a couple of missions.