My very first character ever (in Bluebook D&D) died in the first scene to a magical stalactite I forget what they called them falling from the ceiling. One die roll... an death. 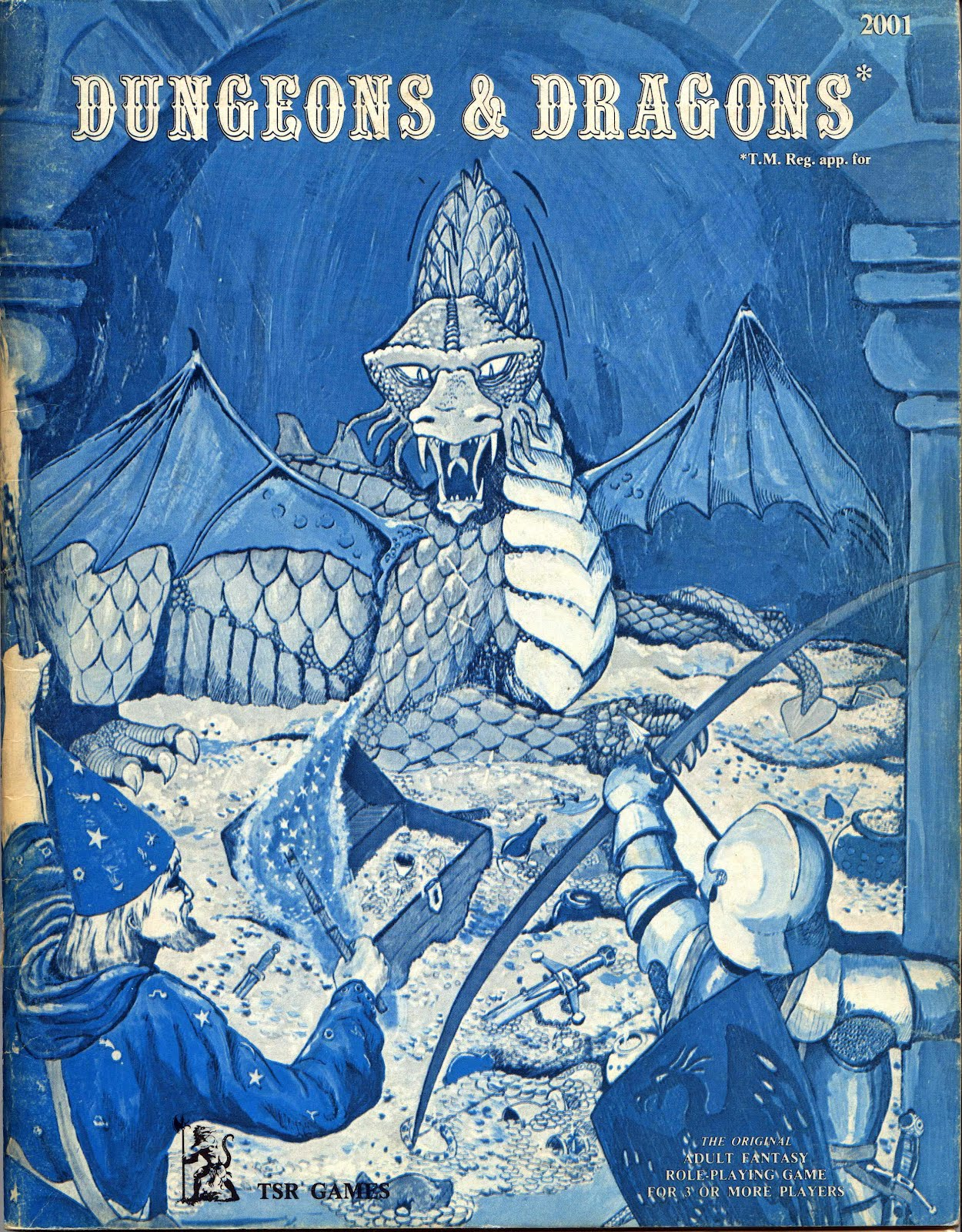 Pathfinder. 3rd level Elf Rogue. He took a hammer blow to the face from a duergar chieftain.
C

well those are things people die from...

My 5e character did go down while fighting the green dragon in LMOPD. Luckily my party had the gold to buy me a raise.

It was my first character to die, of any edition, not counting computer games of course

Most campaigns I play in fall apart before my character get's into any opportunity to die.

I think my first death was to 3-handed statue that we didn't figure out the puzzle for and instead fought it, and so I died. That's the only one I had, and a few close calls.

Every elf or half elf I've ever played has died. Nothing spectacular, just bad rolls on my part or good rolls on the DM's part. I keep thinking the next one is going to survive.

On the other hand, I've never had a non-elf PC die. It's a curse.

Oofta said:
Every elf or half elf I've ever played has died. Nothing spectacular, just bad rolls on my part or good rolls on the DM's part. I keep thinking the next one is going to survive.

On the other hand, I've never had a non-elf PC die. It's a curse.
Click to expand...

Get thee hence to a Cleric dude

I am so old I don't remember my first pc death. Now Murr did die 7 times.

1st level fighter died to a banshee wail (it was a TPK). That was in 1980 or so using the Advanced D&D rules set. Playing in the big sandbox world from Judges Guild, on the City State of the Invincible Overlord map.

Two unconventional deaths before the first normal one:

1E Advanced (technically we were playing Labyrinth Lord, the OSR version), my crafty elf swore allegiance to the Big Bad - technically to save the rest of the party's lives, which their characters could not know. He and his wicked master died at the hands of his former party members and the Forces of Good (TM).

Another game, my reckless half-orc rogue jumped aboard a speeding hay cart to rescue a popular damsel. Swashbuckling was not her forte, and due to the bucking of the cart she accidentally impaled the hostage on her rapier. She was imprisoned and was threatened by the prison guards. It turned out to be the last session, so as far as history knows she died in prison. (until I ever decide to revive her for a future campaign that is! She's Schroedinger's Rogue!)

Then I had one character torn up by wolves. Very straightforward. I actually haven't lost a character since.

Just to be clear: absolutely none of my elf PC deaths have been memorable. I'd be okay if they died heroically. But no. I think the first one fell to his death after missing the trap. Another just walked around the wrong corner and became a pincussion (the DM said it was the first PC he had ever killed). In 4E it was a couple of 1's in a row on death saves after dropping to 0. In 5E it was the DM critting and then rolling all the damage (including the base) and then maxing out all the die resulting in instant death because the PC was already hurt. I think I'm forgetting at least one.

In no case have I ever had an elf get past 3rd level.

P.S. I did also remember one other PC dying that wasn't an elf, but the DM that only ran for us one time. He had us all roll up 2 PCs (one of mine was an elf that died in a flooding room) and then killed off all the PCs one after another. Including the guy that was killed by a giant hand coming out of the wall. My human cleric could have survived as the last PC standing but at that point I was so disgusted that he effectively committed suicide so I'm not sure that really counts.

They say that the first character death sticks with you, haunts you.

That you always remember that feeling, that loss, the name of the first character that died. That it will leave you shaken, crying out in the night, for years after.

But let me tell you- the years pass, and the deaths mount. Character after character done in, their lives snuffed out by your decisions.

Fighter (think) choked to death on spores in the dungeon in the old Red Box.
I still live with the wound. To this day I refuse to believe that something called "yellow mold" can nonchalantly masquerade as gold tableware. That was dumb when I was 10, and it's still dumb today.

The first non-intro dungeon death was a MU poisoned, cocooned, and sucked dry by spiders in a homebrewed dungeon called, fittingly enough, "Spider Castle."
No ongoing spider-related trauma for that one, though. I grew past it.

There's been so many... I honestly don't remember my first death. I remember the first ALMOST death.

Playing Temple of Elemental Evil, my dwarf fighter opened a door in the moat house (I think, exact location escapes me) and set off a spear trap. He took them full force but survived... though I'm sure he died in there at some point!

The players in my homebrew campaign had their first TPK a month ago. They fought a homebrew CR-13 Fire Drake, and it roasted them with dragonfire.

Being the evil overlord he was, the dragon’s master brought them back to life to serve as gladiators for his entertainment. The PCs’ allies tracked them down and managed to free them, and the players in turn were able to take their revenge by leading a slave revolt, killing both the dragon and its master in the resulting chaos.

Garthanos said:
My very first character ever (in Bluebook D&D) died in the first scene to a magical stalactite I forget what they called them falling from the ceiling. One die roll... an death.
Care to share yours?
Click to expand...

I think the critter you are searching for is piercer. Those, along with green slime, were the bane of early dungeons.

Alas, I also have had so many deaths, it would be like picking a random corpse out of an overpopulated graveyard. Well, for those that actually left a corpse...

Mostly a DM, but my first character death (I think) was my paladin, Sir Toril (name blatantly stolen from Abeir-Toril). Died holding off Githyanki (who were reasonably upset that the group had invaded their citadel in the Astral Plane) so that the rest of the party could escape. A true and proper death for a paladin.

The first PC that died while I was DMing, that I don't remember. But my twin brother does. Apparently his very first character ever was a cleric, who died from either a rolling boulder or pit trap. Somehow, he got over that and we still game together to this day.

A couple of years ago, I was teaching my now 13 year old son some basics of DMing, and he was running Death House for me as a solo character. I was exploring the 3rd floor of the house, and had just defeated a specter in the nursery room. After I left the room, I opened a storage closet, and I was immediately attacked and beaten to death by an animated broom (I missed on all of my attacks, and the broom hit on all of it's attacks). I failed all 3 of my death save attempts, and that was that.

RIP Ivann Ironforge, the dwarf who drank the poisoned bottle of ale. In BECM, there was no such thing as "poison damage" or "the Poisoned condition," you either passed your save throw vs. poison or you died.

And what kind of dwarf is going to simply ignore a free bottle of ale?!

I have had characters retire or fade out from the party.
A Human Arcane Archer that got banished back to his material plane.
A Drow Samurai who decided to quick the party for a Nymph they met in the forest (I didn't care for Samurai).
Countless others where the campaign just kind of faded out.

I think my first was a Chaotic Evil Human fighter. After the party imploded, the survivors were captured by Drow. We attempted to escape, and in the process got ourselves killed by spiders.

There was I recall one we used to game with that had his characters die, like, all the time. It was almost impressive, looking back.

My first character death was in the d20 conversation of Call of Cthulhu. I found a hidden panel in the ceiling, opened it, and looked in, to see a horrifically twisted mirror image of the room I was in, which I fell into, landed on the floor, and died from the fall damage.

My first D&D character death was in an introductory dungeon that included a wishing well. I wished for a magic weapon, and some monster (can’t remember what) rushed into the room wielding a magic weapon, and proceeded to kill me with it.
You must log in or register to reply here.
Share:
Facebook Twitter Reddit Pinterest Tumblr WhatsApp Email Link
Forum list