So it's wonderful that the most enduring "joke" monster actually ended up in the Monster Manual. But what if they were a PC race.

So going through their statblock I've tried to come up with something for a Flumph PC...

Flumph
Flumphs are jellyfish like creatures which often reside in the Underdark. They have a disc-like body with a pair of eyestalks protruding from the top with a mouth in the center of their body, and a set of spike tipped tentacles at the bottom side of their bodies. A flumph gives off a faint luminescent glow which often reflects their emotional state. Like pink for amusement, blue for sadness, green for curiosity and crimson for anger. They are generally peaceful creatures who feed off ambient psychic energy from other nearby sentient creatures. As such they are quite sensitive to emotions of other creatures, and many prefer to only seek out creatures with positive emotions. Most Flumphs live in groups called cloisters.

Flumphs float in the air through sacs of bouyant gases contained within their bodies. They propel themselves through inhaling air through their mouths and exhaling it through vents on the sides of their bodies. Flumphs like Jellyfish can reproduce asexually. They generally don't have male or female genders (some may adopt such concepts around other creatures), but they might choose to be either Polyps which can bud new Flumphs and are stereotypically passive or Medusae which can lay eggs and are stereotypically flighty, at different periods of time and are the closest thing they have to their concept of gender. It typically takes a Flumph one to two weeks to transition between Polyps and Medusae and vice versa.

Many Flumph PCs are unusual Flumphs in that they're bigger and more independent of other Flumphs. They often find themselves outcasts from any Cloister they may come across, because they often have unusual reactions or tastes towards emotions and psychic energy. Some of these Flumphs themselves give off unusual psychic energy vibes that other Flumphs become uncomfortable around. Closely associating with non-Flumphs tend to make these Flumphs even more alienated from Flumph society.

Suggested abilities score bonuses: Intelligence and Wisdom, many Flumphs are Wizards (or Psion equivalent class) or Monks.
Creature Type: You are an Aberration
Size: Your size is Small
Speed: Your walking walking speed is 5 feet, and you have a flying speed of 30 feet
Darkvision: Within 60 feet you can see in dim light as if it was bright light within and in darkness as if it was dim light. You only see things in shades of grey with Darkvision.
Advanced Telepathy: You can communicate telepathically with any creature that understands a language within 60 feet. You can also "listen in" on any telepathic exchange within 60 feet, and can't be surprised by creatures that have Telepathy within 60 feet.
Telepathic Shroud: You have advantage to saves or ability checks against reading their thoughts or emotions.
Tendrils: You can use their tendrils as an unarmed attack, it does 1d6 piercing damage and may be used with the finesse property. As a bonus action they can inflict an additional 1d4 acid damage with a successful attack, which they can do a number of times equal to their proficiency bonus until they complete a long rest. The acid damage increases to by 1d4 at certain levels: 5th level (2d4), 11th level (3d4), and 17th level (4d4).
Stench spray: In a 15 foot cone you can spray creatures with a foul smelling liquid that inflicts the poisoned condition on each creature in the area unless they succeed on a dexterity save, with a save DC based on their Constitution, Intelligence or Wisdom bonus. Creatures within 5 feet of creatures coated with this spray are poisoned. The coating lasts 1d4 rounds and you can't use this ability again until they complete a long rest.
Languages: You understand common and one additional language, usually Undercommon

I've done away with Psychic Vulnerability, and feel the Prone Deficiency is too much for PC Flumphs (even if toned down). I think the main things to tweak would be the Tendrils and Stench Spray abilities, flight has been done with for other in-testing PC races.

I don't care if Flumphs can wear Heavy Armor and fly, in fact I want them to, as I like the image of a Flumph wearing Full Plate that resembles a Flying Saucer.

Kobold Avenger said:
I don't care if Flumphs can wear Heavy Armor and fly, in fact I want them to, as I like the image of a Flumph wearing Full Plate that resembles a Flying Saucer.
Click to expand...

I wish I could Like and Laugh button at the same time because that idea is flipping genius!

Also think of Flumph Ranger with a Shortbow which I guess they hold horizontally with 2 tentacles on the arrow's fletching, Flumph Barbarian wielding the biggest weapon it can hold in it's tentacles, and finally Flumph Bard with a stringed instrument: spikes on tentacles means no pick needed.

Great, now someone is going to do a Harper ranger flumph wielding dual rapiers and a hedgehog animal companion.

Does Flumph have enough lore to be a PC race?

Not a Hobbit said:
Does Flumph have enough lore to be a PC race?
Click to expand...

There's like a third of a page in the Monster Manual on Flumphs, which I summarized and I've added some things to the lore, and left open. Of course one could also try adapting some of the things from Pathfinder's interpretation of them too.

They could appear in Spelljammer, or in Planescape.

We should rebember they have a different taxonomy, and this means they can't wear clothing, armors and any magic items designed by bipedal humanoids. It would be like shoes for centaurs or hats for minotaurs, or a breastplate for a humanoid with four arms (for example the shokans from Mortal Kombat or the tetramands from Ben 10).

Magic items since 3e just change their shape to fit whoever finds them and wears them. Since that edition they hand-waved all that stuff away, because they never wanted to go in big details with having to resize armor to fit small characters.

Supporter
Anything that can get white card draw in MtG can't be all bad! 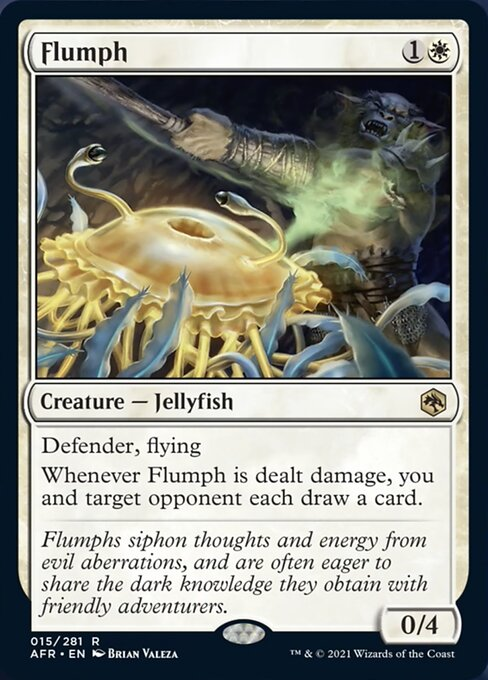 I like the idea. Does being an Aberration carrying any kinda of special ruling towards magic ala how Constructs couldn't benefit from regular healing or some spells being no selled by being a Fey?

Also, don't forget that the Flump Bard can use the Harmonica as its musical instrument.

I think ongoing Poisoned Condition may be a bit OP for a racial triat? perhaps an AoE that blinds (Ink spray) or stuns (Brainwave) until (end of?) next round, recharge on a short rest?

Kobold Avenger said:
There's like a third of a page in the Monster Manual on Flumphs, which I summarized and I've added some things to the lore, and left open. Of course one could also try adapting some of the things from Pathfinder's interpretation of them too.
Click to expand...

They had their own Ecology article back in the day, too.

I love flumphs enough to have put them in to two different superhero universes as residents of Jupiter.

You know, I literally forgot that Flumphs can be Monks basically.

Meaning you know how badass a Way of the Astral Self Flumph Monk would be?

Weiley31 said:
I like the idea. Does being an Aberration carrying any kinda of special ruling towards magic ala how Constructs couldn't benefit from regular healing or some spells being no selled by being a Fey?
Click to expand...

It means they can be subjected to spells like protection from evil and good.

I rather play a skeleton to be honest.

I Played a willowisp psion back in 3.5e so a PC Flumph is good by me.
I also dont think deeding a dc 10 dex save to recover from prone is too much when balanced against flight.

Davies said:
They had their own Ecology article back in the day, too.
Click to expand...

So the Medieval version of Blasto, the first Hanar Spectre.

(sorry, been playing a lot of Mass Effect Legendary lately).

Faolyn said:
It means they can be subjected to spells like protection from evil and good.
Click to expand...