All I can think of right now

Drift Woode - a stoner hippy beatnik druid (1e, he made it to 5th level before we moved on to something else...he's still alive I guess...)

I did "reprise" Drift's role for a 3.5e game when a friend was running the "Savage Tide" AP...but in this incarnation he was a stoner hippy surfer-dude druid with a giant squid 'familiar' named "Steve" iirc.

Normally I don't go for "silly" names or characters, but every now and then you just gotta do it to lighten the 'seriousness' of all the other PC's/NPC's.

Moobsly Blingfilcher, a rotund halfling 3e rogue*/bard (pole-dancing specialist) who got rolled up but never saw actual play.
For some reason.


* I don't recall if he was an actual rogue, or simply burgled as a side-hustle.

Woah. This thread is 15 years old!

Ok, I just realized I have over 70 characters and none of them have funny names. The closest I can get is a kobold named Civip, and that's just draconic for Frost. As for characters I've seen, I know I've run into a few but can't remember any names to save my life.

I had a player run a human cleric of Kord named Cal Trop through a full 20-level campaign. In the follow-up campaign (which took place 20 years later) he had died and become an avatar of Kord.

That same follow-on campaign had a fighter named Binkadink Dundernoggin, but since he was a gnome that was a perfectly reasonable name. (He had relatives names Jinkadoodle, Winkidew, and Piddilink.)

Staff member
Got lots! Some got used, some didn’t.

I had a bard named Dore Mifaso LaTido.

I had a one-eyed gnome ranger named Rumple Pliskin.

Purity Balls was a hard drinkin', twin .45 totin' female gunslinger, and the daughter of Rev. Ezekiel Leviathan Balls. He did NOT approve of her lifestyle.

Rög Tus-karr was a version of pulp-era/Sci-Fi types like Adam Strange, Flash Gordon, Buck Rodgers and Commando Cody. He's a crash landed alien scout, a heavyworlder. He has some advanced sensory & survival tech in his uniform, plus some jump jets and a handy blaster pistol for a sidearm. Has a small, golden bird-like robot drone for recon, too. As a heavyworlder, he is physically stronger and more durable than humans. He looks like a bipedal, 7'8" tall pink elephant. Home world: Snuffleupagron 5. (Winos hate him.)

Some I've seen over time - most are/were not my own:

The Gnome Alaska
Stilth Incan* (I-as-DM ask player for PC's name; his reply is "still thinkin'"; my reply is "Good. How are you spelling that?")
No'ei Deyayet* (same sequence as Stilth, above)
Axwell Smart (not a PC name yet; I use it for one of the warriors a PC of mine has the ability to summon now and then)

Characters with dismal starting stats have generated a few:

Class-race combinations have led to:

Pelmuc (Part-Elf Magic-user/Cleric)
Anne (Assassin-Necromancer Neutral Evil; killed in process of meeting the party before they ever knew what she was)
Elena (Elf Lawful Evil Necromancer-Assassin; and Anne's direct replacement)

Our random name generation system has led to some crazy and-or nigh-unpronounceable names; one of the worst of the latter being my bard Que'fnlnrl. Oddly enough, her name being unpronounceable made sense in a way: she was a full Dryad, meaning the only way to say her name properly would be to first turn yourself into a tree... For day-to-day purposes we just called her Ka'fell.

And the worst: I once ran a one-shot where one of the players was named Bernard. A different player named her character Bernard. What a nightmare that was!

Lanefan said:
And the worst: I once ran a one-shot where one of the players was named Bernard. A different player named her character Bernard. What a nightmare that was!
Click to expand...

Not to be outdone, in my freshman year of college, my social circle included 5 “Brians”

Staff member
Zjax “Yellowjack” was a bisento-wielding Githzerai monk/PsyWar/Lucid Cenobite. (The 4Ed version is a hybrid Avenger/Battlemind.). The joke? “Yellowjack” is an old name for yellow fever, and he was the sole survivor of a “plague ship” (actually beset by undead). So, as the yellow-skinned survivor of an apparent contagion, he got a nickname…

Dixon Balzac is a noir detective type. Have’t gotten to play with him yet.

javcs said:
K'Taar Sabrewolf.
Funny 'cause a) in the USA it's spell saber, sabre being the European version, and he carried several sabers/sabres, but had nothing to do with wolves, except for having speed, the name, and being able to track very well at speed (no ranger levels, though).
Click to expand...


Makes me wonder if the player was a fan of Killer Instinct.

In a Rifts game, there was an android who had adopted a human name to fit in better. The name he chose was Mack Ross.

And more recently, Danone Yakult the half-elf warlock (Yakult being the name of a brand of bio-active yoghurt, and Danone being the company that makes it).

Staff member
Doctor Zeus: a classic comic book trope- the hyper-intelligent great ape (in this case, an orangutan)- in an early 1900s Supers game. In keeping with many of his spiritual predecessors, his enlarged brain is visible beneath a glassy dome.

He’s the result of experiments done by Doctor Moreau. Besides his great strength, his main powers are mental- telepathy, mind control, and a bit of telekinesis. But he also has expanded on the work of Nikola Tesla, creating mechanical resonance mines, electric death rays, and so fort.

The name is a play on Doctor Zaius from Planet of the Apes and the Greek god Zeus (because of his love of electrical weaponry.

Nifft said:
Sparrowhawk the Wizard. Actually the longest surviving PC in the game that I run. I'll see if I can do anything about that...

We had a Sparrowhawk the Paladin in one of our games many moons ago.

Jacob the Impaler said:
At least I was listening to good music when I was twelve.
Click to expand...

I'm sure I'll get into trouble for this but...that's debatable. 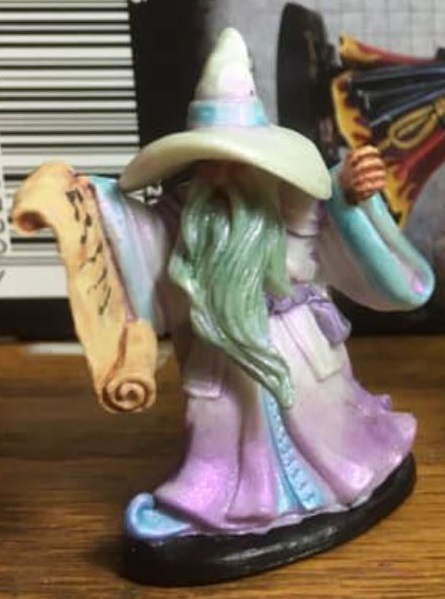 Pomoxis Chrysops: A Jedi type character for the old West End Games' Star Wars RPG. I took the name from an anatomy diagram of a type of fly.

Gunporn Moontree: Made an appearance in a game of Angel I was running. I honestly thought this was just the player's passive aggressive way of telling me he wasn't interested in the campaign but he assured me it wasn't.

I'm one who really hates joke names, except in certain genres... specifically, in WFRP, and in Tunnels and Trolls. I tolerate them in D&D, grudgingly, but that's because, for the last 6 years, have only run D&D as part of open table games.

I have never forgiven the player who named an elven cleric "Elrond Hubbard."

Staff member
D.R.E.I.D.E.L.: Warforged bardic dervish. Made a song for it.

News Digest for the Week of September 4