I recently embarked on a seven-week long journey to teach 20 Boy Scouts about game design, and learned a lot along the way. Our second game was Family Feud with a twist -- Star Wars! -- and the workshop on a whole was much more organized thanks to the lessons we learned from playing Jenga. 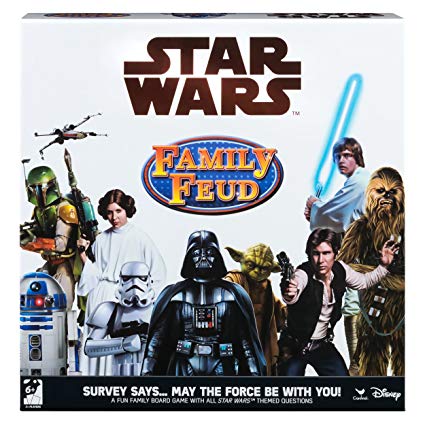 Here's the other articles in this series:
Family Feud has been around forever and I was surprised to discover the show is still quite popular thanks to host Steve Harvey. The rules on actually running Family Feud are curiously sparse on the Internet, but here’s how the game works:
We tweaked this format a bit to make the game flow smoother. I used a Family Feud PowerPoint with a projector and screen to manage the game and bought buzzers for players to buzz in. There were no additional lightning rounds, and the points didn’t fluctuate (we didn’t double/triple points as happens in the show).
[h=3]Medium[/h]Family Feud is a party game. Most board and card games are for no more than six players. Party games are generally for four to 12 or more players and often arranged in teams. Because they are meant for larger social situations, the gameplay emphasizes interaction between players and typically involves some form of creativity.
[h=3]Player Format[/h]Team competition (multiple players vs. multiple players). This is also a common structure, finding its way into most team sports, card games like bridge and spades, and outdoor games like capture the flag.
[h=3]Objectives[/h]Family Feud determines win through points and scoring. Get more points than your opponent as in soccer or get a lower score such as in golf. The way that points are assigned can give game designers flexibility to adjust the play experience.
[h=3]Resources[/h]Family Feud uses time as a resource, buzzing out players who don’t answer questions quickly enough. But even if they do, the player must rely on both their knowledge of popular culture and the knowledge of their teams. This turns their team members into another resource that can be drawn upon to help win the game.
[h=3]Theme[/h]Family Feud doesn’t normally have a theme, but our game did – Star Wars! Like other versions, it relies on surveys, so Family Feud is largely about knowing what is the most popular answer. It is not necessarily focused on the “best” answer, but rather the one that was most commonly chosen in surveys.
[h=3]Play Value[/h]Family Feud emphasizes friendly competition. But it also encourages harmony with your team members (the “family” in Family Feud). The name is a double entendre – the feud could be between the two families of players, or it could be a feud within the teams when they disagree on an answer.

Family Feud’s difficulty is dependent on the subject at hand. In this case, it’s Star Wars, so fans of Star Wars had an easier time than players who were unfamiliar with the franchise. That said, it’s not impossible for them to do well – what players are really guessing isn’t the right answer but the most popular answer in a survey, and that can sometimes be surprising. Depth refers to the ability to continue to find enjoyment in a game as one’s skill improves. Family Feud isn’t a particularly deep game. You don’t really get better at it if the subject changes, although you might get better when playing with team members in how you work together. Depth in turns affects replay value, the reason to play the game over and over. Family Feud has some curious limitations in this regard; once you know the most popular answers to a question, you can’t use that question again without giving experienced players undue advantage. This means that the game has a shelf life limited to the number of cards with questions included in the game. Like other trivia games, it’s possible to forget the answers if you don’t play it for a while, but generally the most fun is had if everyone is new to the game.

This was my second experience with running a trivia game. I’ve run the Advanced Dungeons &amp; Dragons Trivia Game for my old D&amp;D group and it was a lopsided affair between me and one other rules-savvy player – Star Wars Family Feud works because you can usually make some guesses as to what the right answer is, unlike a series of questions about AD&amp;D’s sometimes arcane rules.

I took note of how successful having captains were in keeping the game running and keeping 20 boys interested. Every one of them got a chance to play, and the older boys were engaged too. Our next game was 1-2-Switch, which is a fascinating crossover between a party game and a video game.
Last edited: Oct 29, 2019
Click to expand...

What games are you playing during the holidays
2