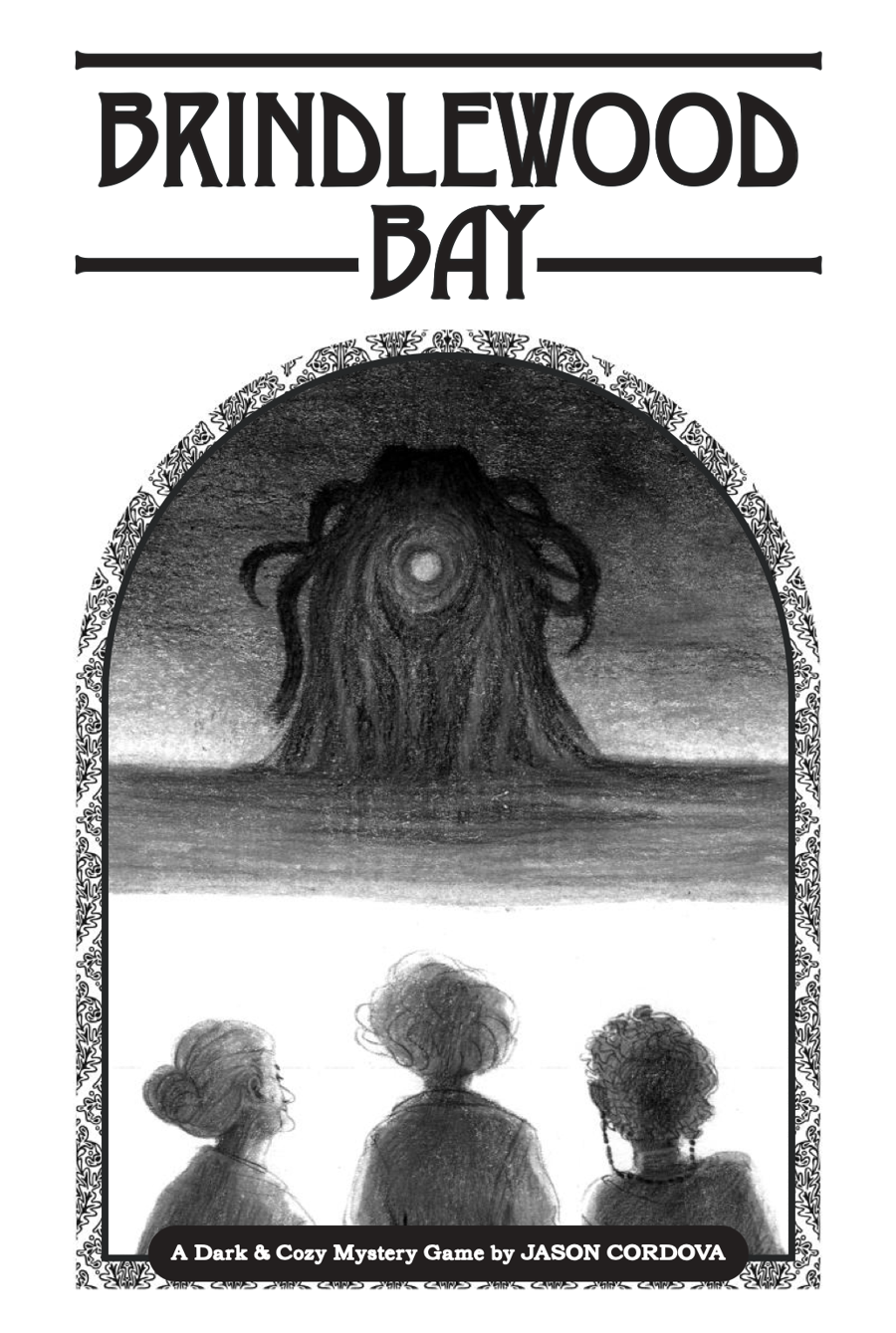 Mysteries can be one of the trickiest types of game to run. Threading the needle between too much information and too little information changes from GM to GM and group to group. When it works, it’s brilliant. There’s a reason Masks of Nyarlathotep is a favorite of mine. The piles of clues that kick off that investigation makes the game a great player driven sandbox. But when it doesn’t, it’s frustrating. Brindlewood Bay, a cozy mystery RPG from designer Jason Cordova, leaves the culprit for the players to (mostly) decide. But it also has a dark campaign structure that gives the sweet old ladies the players create something bigger to battle. Did you ever wonder if The Golden Girls could defeat The Old Ones? Then this game may be for you.

Cozy mysteries are a broad category involving amateur sleuths who solve crimes in small towns. American audiences are most familiar with shows like Murder, She Wrote as a prime example, though the designers broaden the examples out to many other detective shows throughout the years. Even though someone dies every week, the story stays relatively lighthearted with the drama coming from suspects as they are eliminated, suspected again and potentially killed. The Brindlewood Bay campaign centers around a group of elderly women in one of these idyllic New England communities that are part of a fan club centered on a mystery writer. Over the course of the campaign, they get swept up in real mysteries, butt heads with the small town cops who have the wrong suspect, and end up back at someone’s house eating ice cream and talking about who really did it.

Brindlewood Bay uses a very broad adaptation of the PBTA system. There are no playbooks, but each Maven (as the PCs are called) customizes their character with a move named after the famous TV detective from which it is borrowed. The Michael Knight, for example, gives the character a unique mode of transportation. There are broad moves for the day and night and a meddling move that generates clues. The GM picks from a list of pre-generated clues they’ve either developed or pulled from one of the pre-written mysteries. They don’t have to worry about how the clues go together. That’s what the Theorize move is for. After a scene where the players ruminate on the clues they’ve gathered, they roll 2d6 + the number of clues they have minus the mystery’s Complexity rating. On a hit, their theory is correct. If they roll high enough they have a chance to take down the culprit. On a weak hit, the GM adds an unexpected twist to the theory the mavens need to overcome. On a miss, the Mavens are wrong and the GM reacts with a big twist, like killing the main suspect. I’ve done this as a Game Master a few times, where if the players come up with a better motive for a bad guy than mine, I’ll go with that one.

So where does Cthulhu come in? The town of Brindlewood Bay is also home to a Lovecraftian conspiracy that the old ladies uncover as they solve their mundane mysteries. The true nature of Brindlewood Bay is a serialized plot that occasionally rears its tentacled head in play. The ladies uncover Void clues that trigger countdown elements of the serialized plot. They also can engage in occult activities to help their regular investigations. Plus, they can have psychic visions in exchange for better outcomes on rolls. Too many of these black marks and the Maven can be taken out of play just like any other long suffering Cthulhu investigator. Brindlewood Bay works amazingly on the cozy mystery level, but the Lovecraftian aspect offers a way to raise the stakes for a short campaign. It adds an element of Twin Peaks or the X-Files to the game. Everything seems normal in this town, but then you have a lurid dream about the first murder you ever solved and how they weren’t really dead, or you meet a shadowy informant who points your little mystery club at a bloodthirsty cult.

Sometimes adding Cthulhu stuff is unnecessary, but here, it feels like a great way to build in a campaign arc. I know I would watch a show like this on Netflix, where it contrasts the fluffy friendships of the book club gals with the awful supernatural horrors in the shadows. The adventures included with the game lean toward the lighter side of things, which makes the Mythos intrusions feel all the more horrific. Most Mythos investigators get pulled into an obsessive world where the only thing that matters is the next case. Here, the cozy mysteries make the stakes small but palpable, like making sure the book store isn’t destroyed by a gibbering creature sent to eat the book club.

This game is perfect for players who want to try out PbtA mechanics that don't get bogged down in playbooks and game theory. It also is a good choice for fans of these shows or any media full of old ladies who kick butt. Brindlewood Bay provide some great tools to mix horror and humor together, but the real ingredient that makes the game shine is heart.

This review contains affiliate links. If you found these words useful, consider buying the game through the links to support your friendly local game reviewer.

I've been eying this one for a while... Your review might push me over the edge...

This looks like fun. I have purchased it, so thanks for bringing it to my attention. Absolutely love the moves!

Brindlewood Bay is awesome. Not only is it a great game, but it's a fantastic chassis for all sorts of cool hacks.